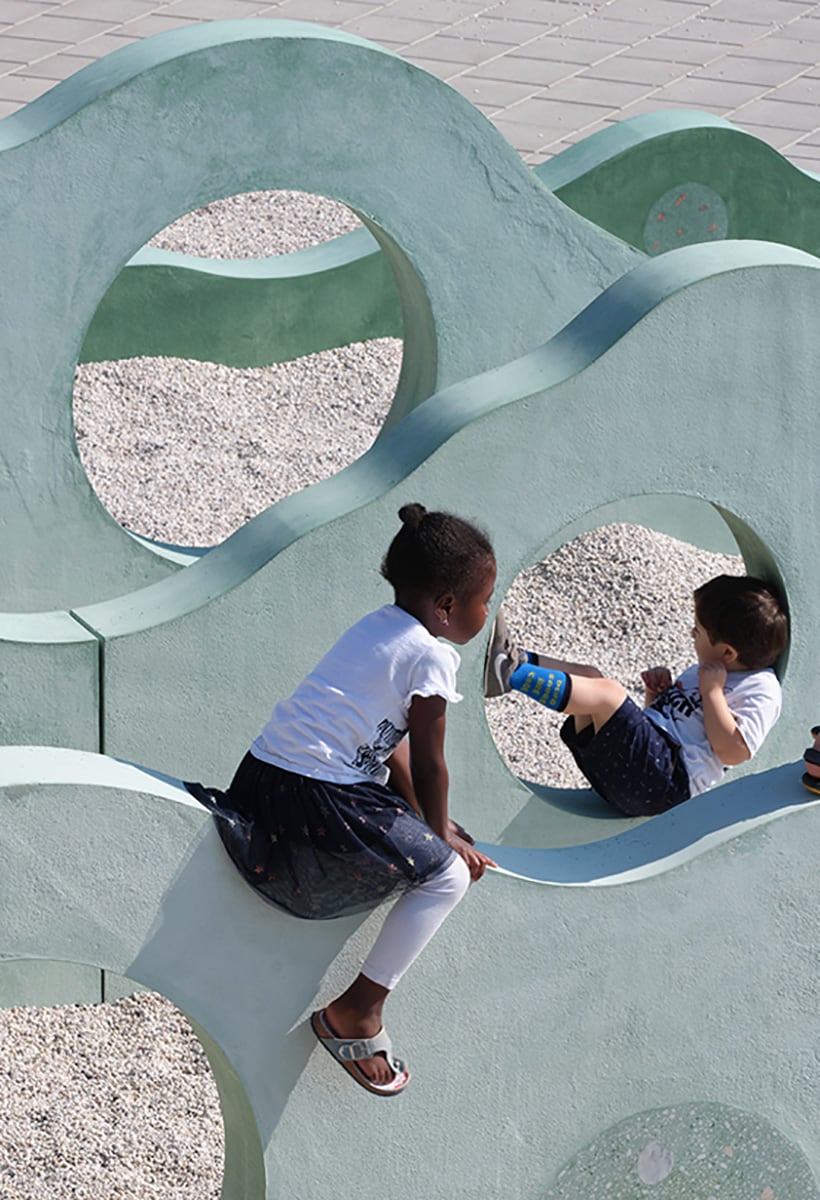 Five exhibitions in Italy not to be missed this week and why go and see them: in Bari, Milan, Trento, Ravenna and Prato

This week we travel to Italian museums and art galleries pursuing a decidedly current issue, the environmental one.

But be careful: we do not do it from a scientific or strictly ecological point of view, but in an artistic consideration of the space inhabited by man.

Let's start with the pictorial works of Guaitamacchi who portrays a bird's eye view of black and white metropolises to move on to the architectural projects of a generation of Italian designers around the world, observing how the their creations fit into the man-made and natural context.

The gallery Schema was dedicated to the avant-garde and experimentation, a unique space on the national scene of the 70s, which welcomed, together with international artists, the radical architectures of Superstudio and the performative spirit of the time. He would have turned 50 and now he is telling the public.

Finally, the landscape is analyzed in two exhibitions, one dedicated to lost villages and the other to beaten paths.

Why see them: dialogue with the environment, nature, the city, the country is peculiar to living and these five exhibitions address the now unavoidable urgency of seeking sustainable ways to do so in the next future. 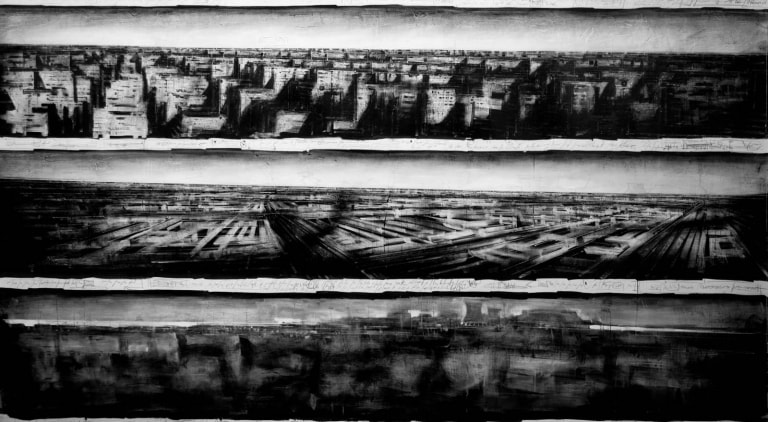 He has just inaugurated the retrospective dedicated to the painter Jonathan Guaitamacchi which presents the works created between 1994 and 2022.

We travel with him flying over global cities, real or imagined, but painted on canvas anyway, in a black and white that is as melancholic as it is functional, as timeless as it is contemporary, certainly autobiographical.

Because what Guaitamacchi proposes are first of all the cities that he habitually frequents, Milan, London and Cape Town, but they are also the invisible cities if all existing cities can be defined as such, or none at all.

In the space of the city, made up of streets that intersect buildings, blocks of flats and industrial plants, time stops or has just stopped. Here everything can happen or happened instantly.

Thus, in that moment of the past or of the future that characterizes every place and no place, Guaitamacchi manages to portray the essence of architecture, in remnants of urban planning that become a metaphor for a place.

Who will like it: comics and literature lovers of between noir and imaginary utopias. 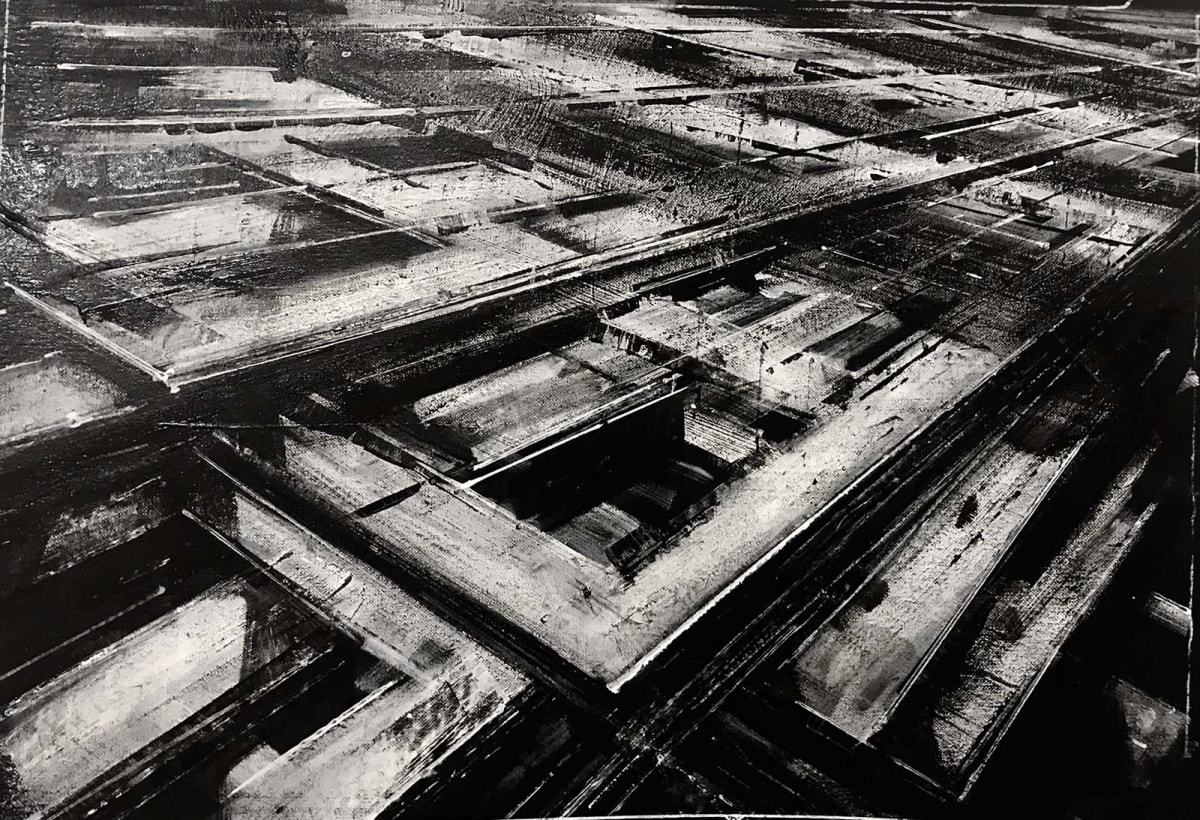 If the physical realization is the best proof and confirmation of architecture and 10 is a decidedly non-exhaustive or scientifically representative number of a peculiarity or an identity trait, this exhibition perfectly obeys the intentions stated in the title.

In fact, we are talking about 10 built (or under construction) architectures, designed by Italian professionals (who work in Italy but also abroad).

Why indicate the national element? He wants to underline the need to promote architecture in Italy, on a par with what other European countries do without thinking that the international context can be ignored.

The other undeclared trait is the age of the architects considered, all belonging to the same generation, that of 35: deliberately not labeled as young, they instead have the same world of reference. You hear the music they have heard and are listening to, you see the films they have watched and you perceive a shared vision of the world in some way.

But that's not enough, because this exhibition contains another that concerns the question of how to represent architecture in a museum. The solution, found by the curators Matteo Ghidoni, Enrico Molteni and Vittorio Pizzigoni, is twofold: to rely on photography and to the model of a detail of the selected architecture, created by the authors themselves.

Thus the entire work can be seen in photography and its structural nodes in a small-scale three-dimensional model. A fragment for the whole, interesting in its partiality, exactly like the choice of projects to show.

Who will like it: those who think that architecture is the most optimistic of the human disciplines, the curious looking for buildings to discover (and eventually visit), those who want to support Italian architecture.

Useful information: Triennale, viale Alemagna 6, Milan. The exhibition, with free admission, can be visited from Tuesday to Sunday, from 11 to 20.

Lost Landscapes. Notes for a trip to forgotten Italy, Civic Gallery of Trento, until February 26th

The word landscape derives from country and its meaning can be traced back to making community, to the interaction between a society and the territory in which it lives. Which is never neutral: that set of buildings and natural spaces is in constant relationship with the people who inhabit them.

Consequently, the term depopulation indicates not only the abandonment of certain places, but also the deterioration of the human relationships that previously took place in those geographical areas.

This exhibition starts from here: telling about abandonment, loneliness, the absence of the community in small Italian villages off the beaten track. Through photography.

The shots of Gabriele Basilico, Silvia Camporesi, Flavio Faganello, Paolo Simonazzi, Italo Zannier and the videos of Vittorio De Seta, Franco La Cecla, Patrizia Giancotti make up a journey along the peninsula from the 50s to today, made up of silent countries, of resilience and resistance to emigration, of lost opportunities and still possible futures.

Who will like it: photography lovers, those who choose to look at the world unexpectedly every day, those traveling along unusual itineraries.

Useful information: Civic Gallery of Trento, via Belenzani 44, Trento. The exhibition can be visited from Tuesday to Sunday from 10 - 18, on Friday 10 - 21. 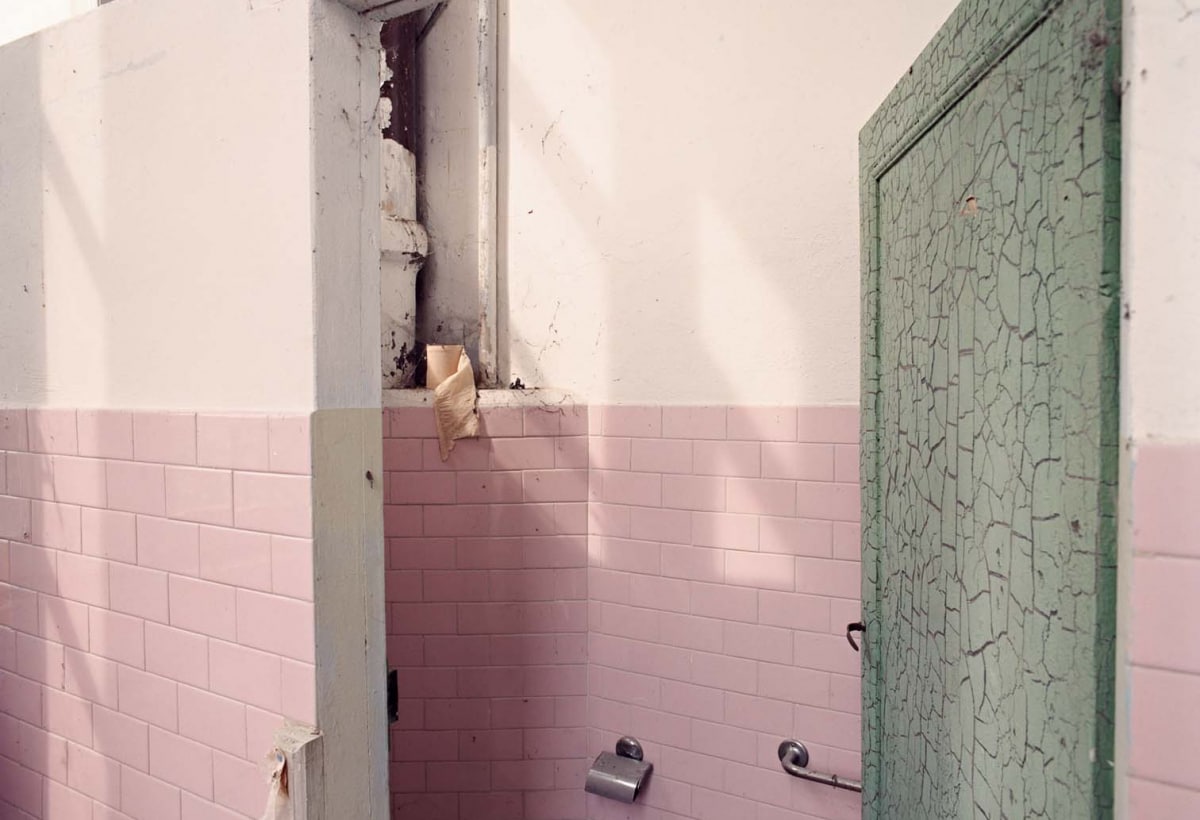 This exhibition is one of the possible declinations and aims to offer the public a journey through the works of artists of different generations, within what we consider landscape.

The dream of the landscape then leaves room for the dreamlike visions of artists such as CaCo3, Andrea Chiesi, Enrico Minguzzi, Marco Neri, Massimo Pulini, Salvo and Carlo Zauli.

Who will like it: those who believe in the power of the imagination, those who think that art can move revolutions and those who never stop dreaming. 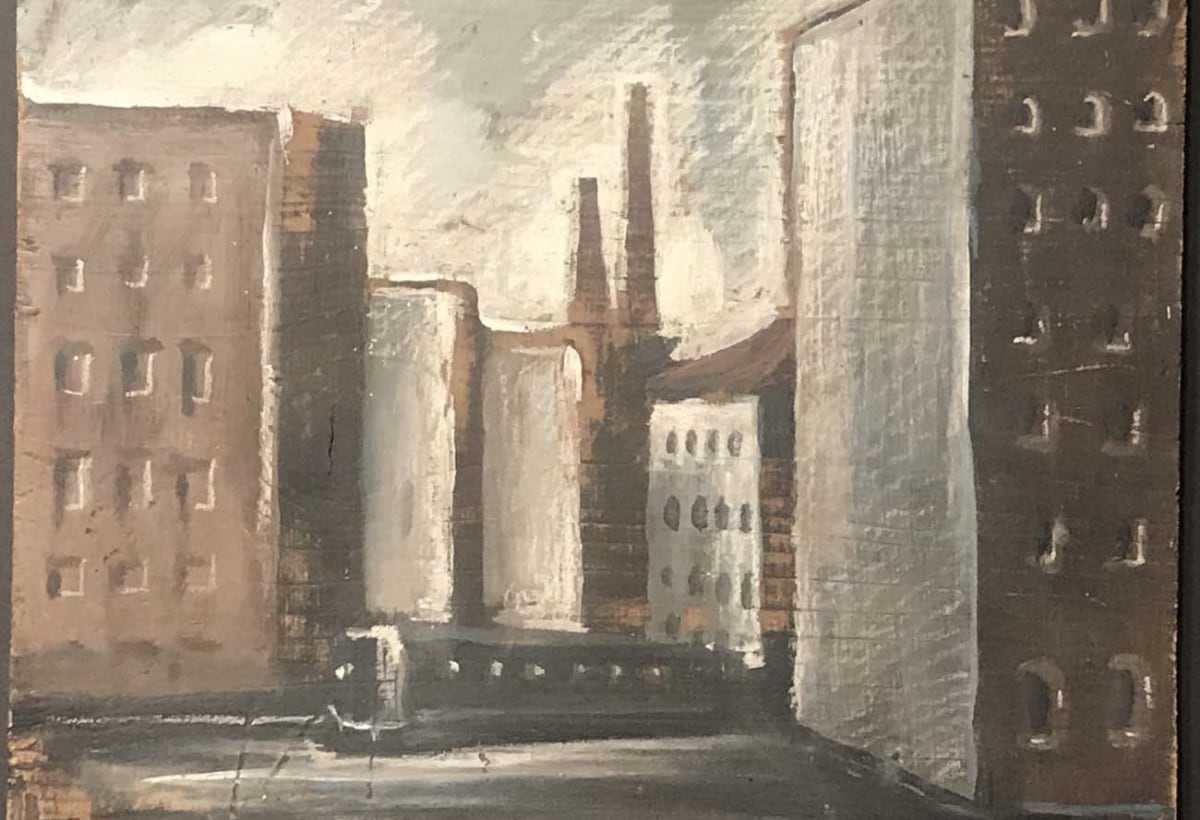 The founder of the Schema gallery, the Tuscan artist Alberto Moretti, would have been 100 years old strong> in the year that has just ended, while his avant-garde and revolutionary gallery would have celebrated 50.

To commemorate this double birthday, the Centro Pecci has created the first museum exhibition dedicated entirely to the gallery's experimental activity and to the conceptual and anthropological work of the artist.

A genius double game, not only because the gallery housed the ideas and works of its founder, but because it was home to projects that have made history, starting with the radical architects, celebrated precisely in that 1972 in New York.

Schema becomes the venue for performative actions as well as a reference point for those wishing to discuss the state of contemporary art.

This brings international artists to the gallery who dialogue with the works of Superstudio, Ugo La Pietra and Gianni Pettena, with the conceptual research of Vincenzo Agnetti, Ketty La Rocca and Giuseppe Chiari, but also with the works with Gino De Dominicis and Jannis Kounellis, of Vettor Pisani, Luigi Ontani and of the Il Carrozzone company.

And now all of this is on display, alongside a section dedicated to Moretti and his artistic research, thanks to a precious curatorial work by Stefano Pezzato in collaboration with Raul Dominguez Supervision and research of Desdemona Ventroni.

Who will like it: those who love diving into archives, reckless dreamers of avant-garde projects, those who think that the future can be built starting from the past.
Useful information: Luigi Pecci Center for Contemporary Art, Viale della Repubblica, 277, Prato. The exhibition is open from Wednesday to Sunday from 10 - 19. 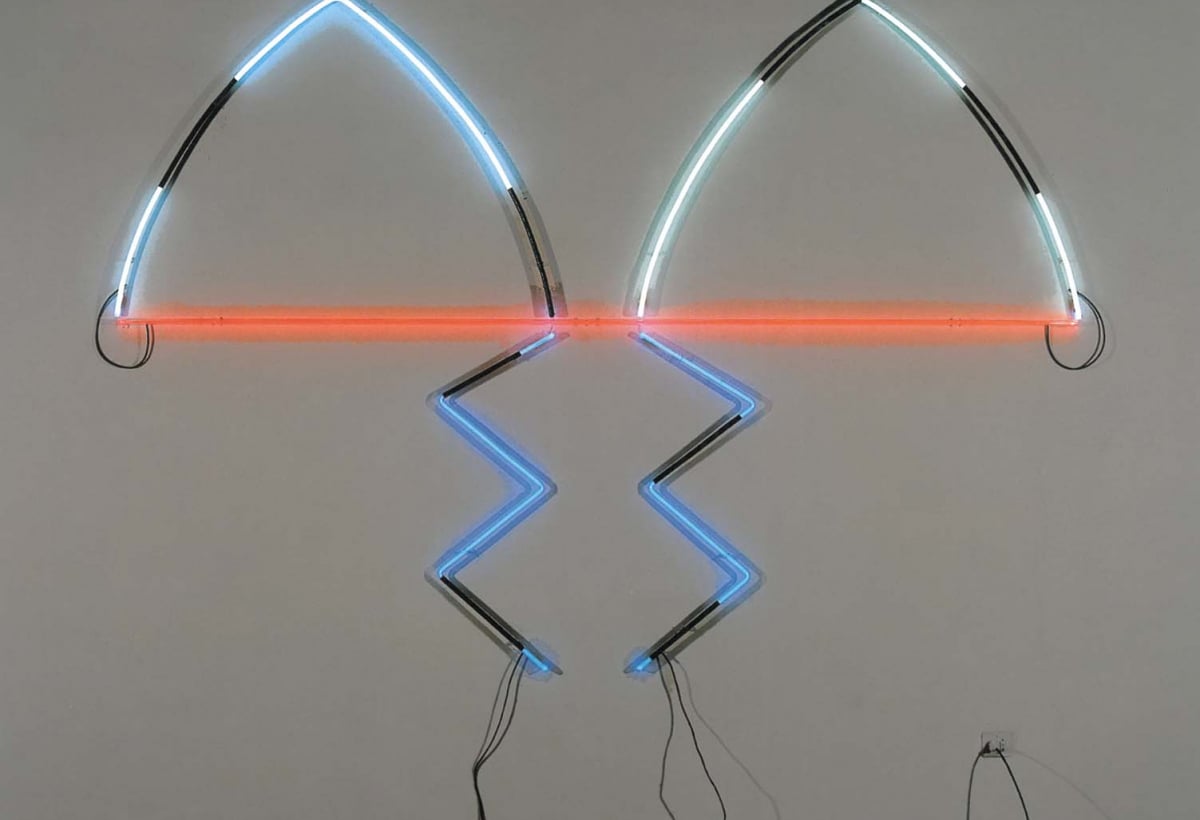