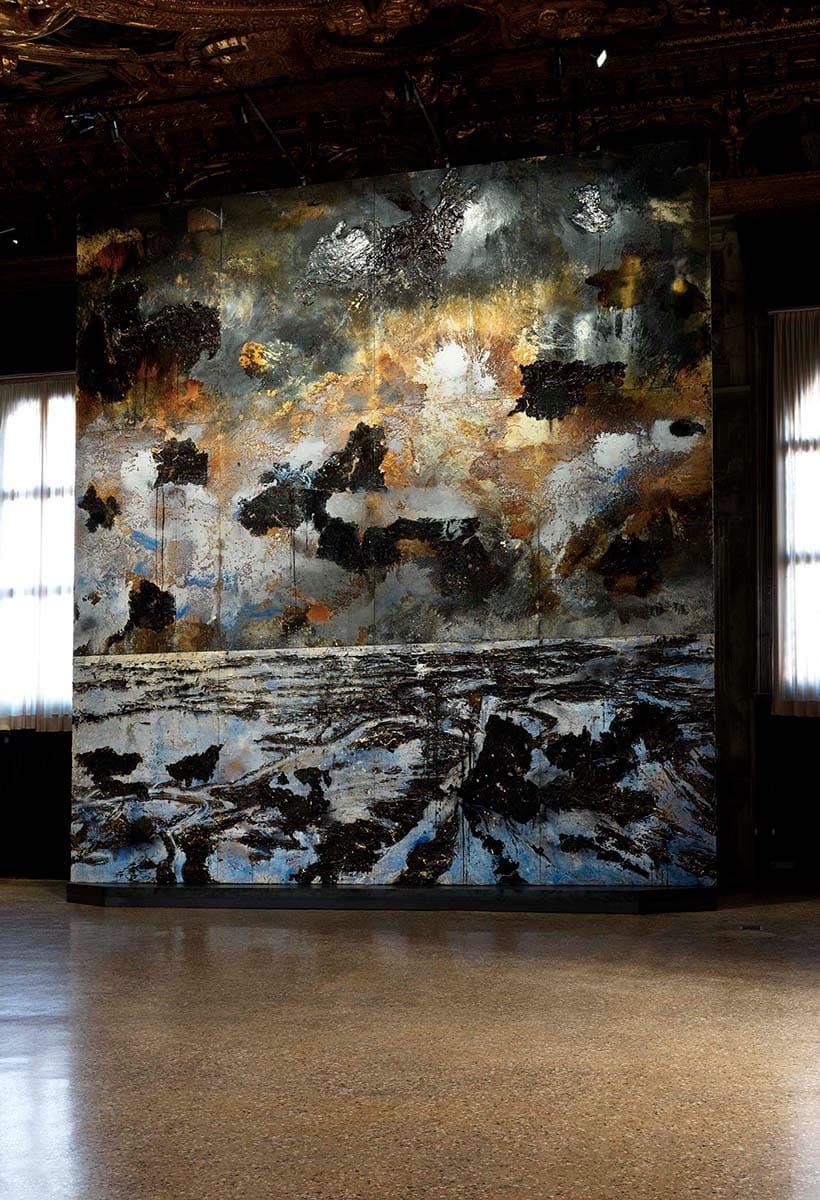 Among the many collateral events at the Biennale Arte 2022, our selection of eight exhibitions not to be missed (and why)

It always happens and the Biennale 2022 reconfirms the tradition: Venice offers an array of exhibitions that often surpass the main appointment in quality and charm. A silent invasion of collateral events involving gardens, palaces, museums, churches and foundations and which, once again, is of the highest order. We have seen many and selected eight for you.

Read also: The 2022 Art Biennale: what to see and how to visit 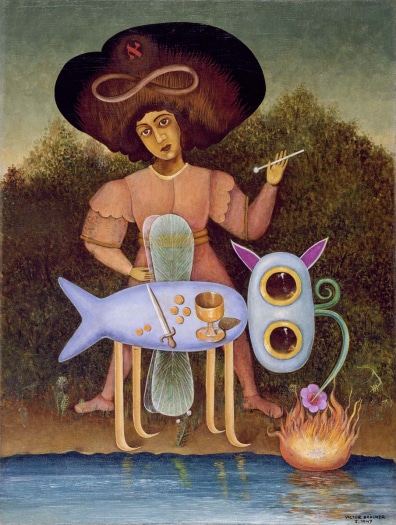 There is no better artist than the South African Marlene Dumas to describe our unstable and suffering times. In the spaces of Palazzo Grassi  there is the best of her production: more than one hundred works, including oil paintings and ink drawings made between 1984 and today, as well as to numerous unpublished pieces.

From the portrait of Baudelaire to that of Pier Paolo Pasolini, from Anna Magnani to an unrecognizable Marilyn Monroe, caught on the morgue bed. The Cape Town artist thus signs an intense (and somber) reflection on the relationship between body and spirit, words and images, reality and perception. Impossible not to be involved, so much so that at the end of the visit one remains suspended, in a state halfway between ecstasy and anguish. 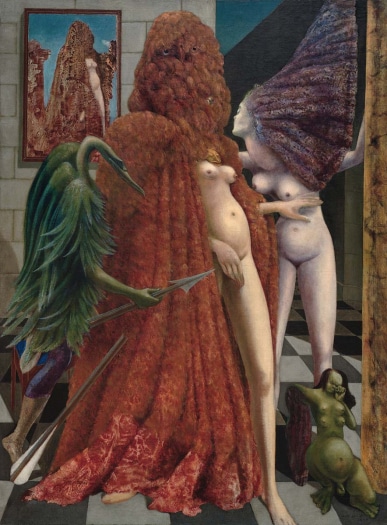 Forget the usual surrealism. This time he is faced with a more mystical than life perspective on magic and the occult. The exhibition brings together 60 works from over 40 international museums and private collections.

On the field there are all the big names of the genre: from René Magritte to Leonor Fini (lately quite popular); from Remedios Varo to Leonora Carrington, which inspired the title of the Biennale curated by Cecilia Alemani. However, the works not to be missed in the rooms of Palazzo Venier dei Leoni are those of Giorgio de Chirico and Max Ernst, where surrealism and metaphysics become a single mystical mixture. 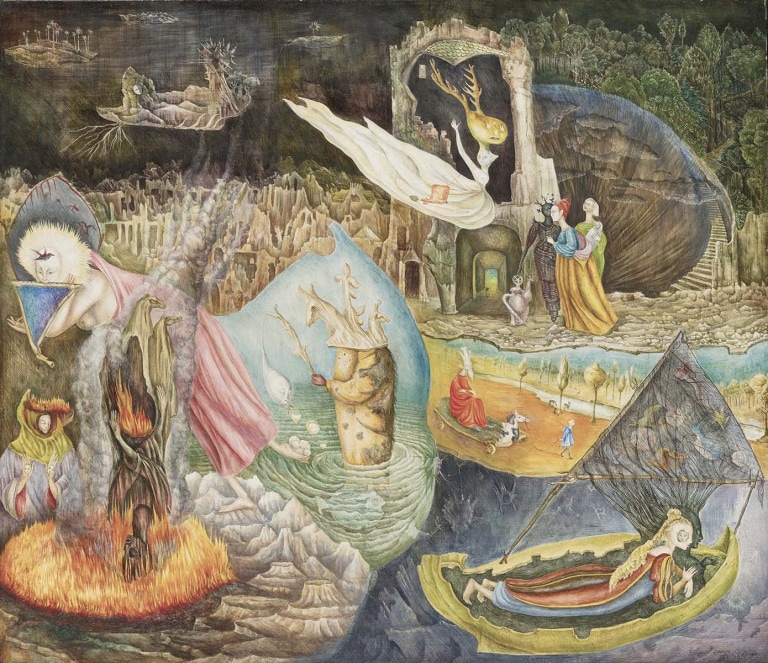 Kehinde Wiley, "An Archeology of Silence"

His portraits of contemporary black heroes land on the island of San Giorgio. For the Venetian exhibition, the Californian artist revisited his 2008 Down series. A monumental corpus of works in which friends, colleagues and figures of the star System were depicted as heroes, saints and warriors, a little to the style of Hans Holbein.

But Wiley goes deeper this time. lui Mixes classic art and contemporary news, with particular attention to the violence of the American police against young people of color. It is a bit as if the Black Lives Matter movement had invaded the halls of the boarding school, flattening any distance, physical and temporal. 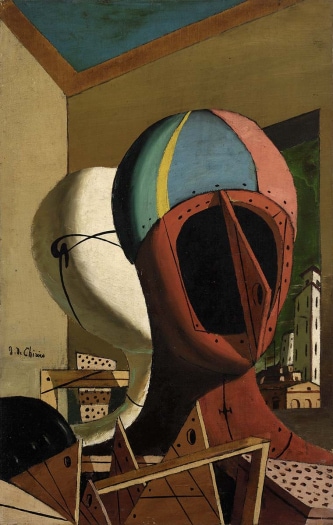 Anselm Kiefer, "These writings, when burned, will finally give some light (Andrea Emo)"

It is one of the musts of this out Biennale. The great Anselm Kiefer created a site-specific installation inside the Sala dello Scrutinio of the Palazzo Ducale, where the doge was originally elected.

This is how the master wanted to pay homage to the greatness of Venice, a commercial and cultural crossroads between North and South, East and West, integrating the magnificent past of the former Maritime Republic with the work of the Venetian philosopher Andrea Emo and with Faust by Goethe. The result is a series of large paintings in perfect harmony with the surrounding space. Majestic works that seem to have been there forever. 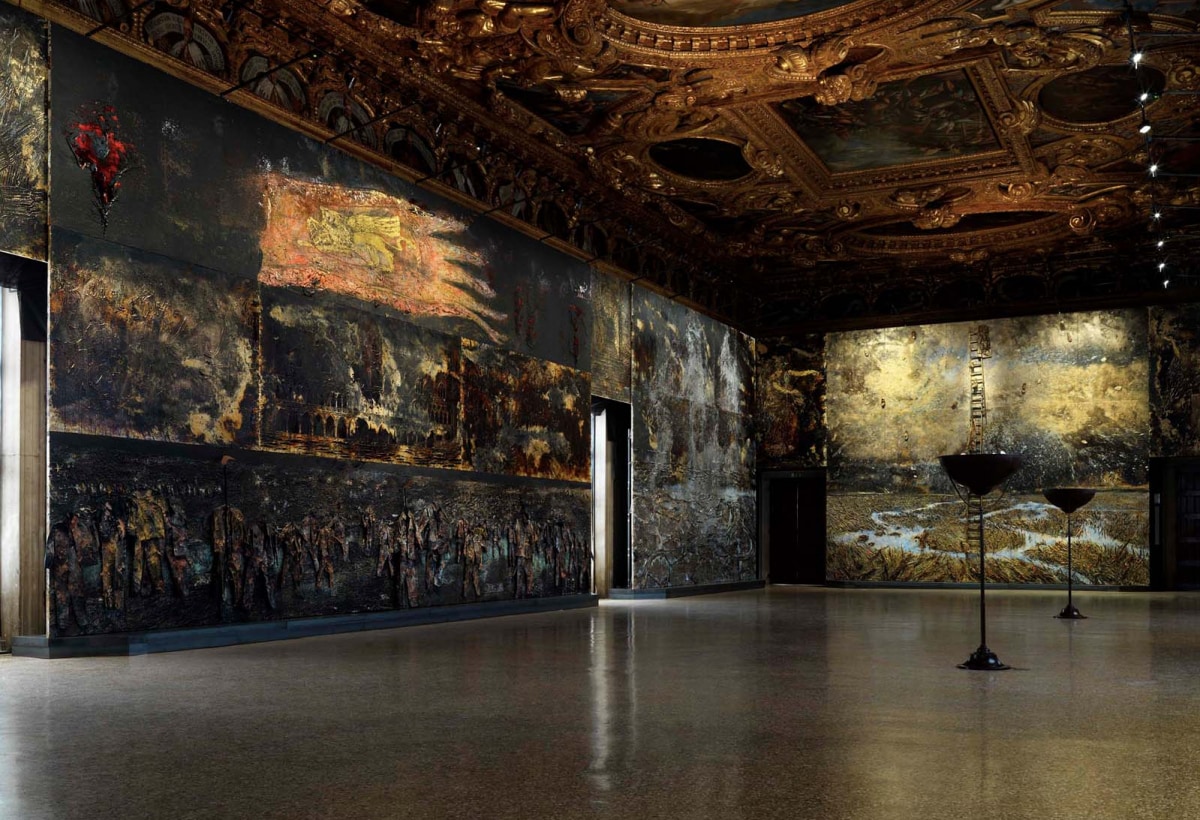 Another great event of the Venetian season is the personal exhibition of Anish Kapoor at the Gallerie dell’Accademia, a place that has always been reserved for the masterpieces of the past. Here the works of the British artist interact with the jewels of the classic collection. With Giorgione and Tiziano.

But not only. Kapoor goes even further and stages brand new works, created with futuristic carbon nanotechnology. The exhibition then has a succulent appendix in the eighteenth-century Palazzo Manfrin, of Cannareggio, future home of the Anish Kapoor Foundation, which will have a permanent collection with his most famous works and a program of temporary exhibitions. 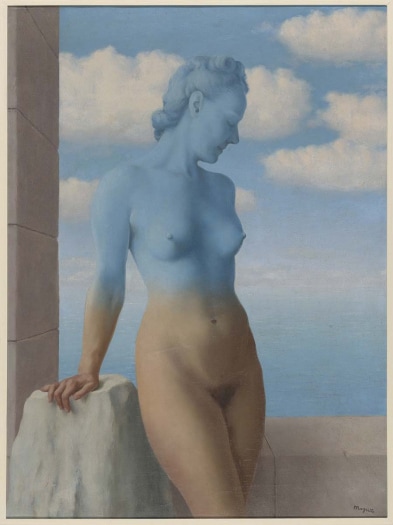 The exhibition of the South African artist Dineo Seshee Bopape, Ocean! What if no change is your desperate mission, and that of the Portuguese Diana Policarpo, Ciguatera, essentially tell of their research journey.

Both have created their works through the use of different media. Above all large sculptural works with attached video-sound installations, but also drawings, inserts of material from the Venetian lagoon, photos and much more. Common goal: to interpret the space of the church of San Lorenzo as a place for reflection on the central role that man has in safeguarding marine well-being. 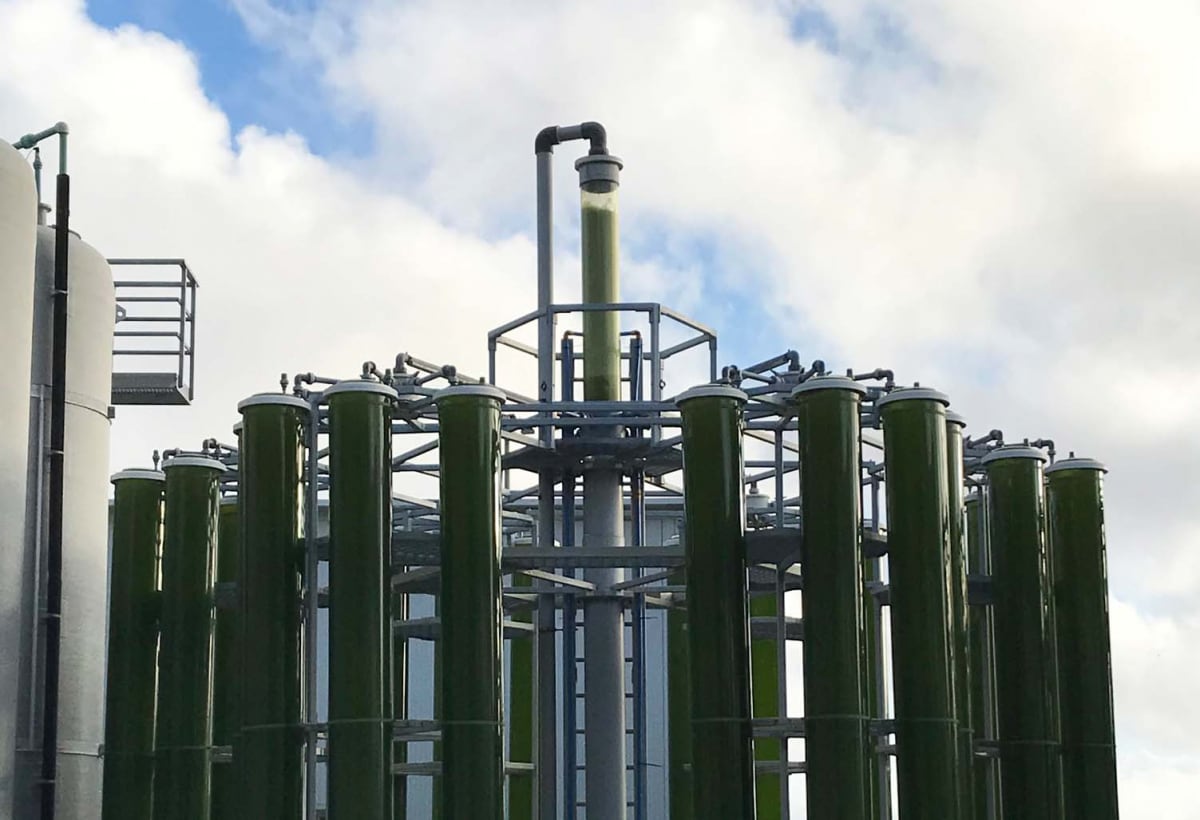 "In Between Art Film Foundation: Penumbra"

The exhibition curated by Alessandro Rabottini and Leonardo Bigazzi at the Ospedaletto and Church of Santa Maria dei Derelitti . A visual journey, but also a philosophical one, told through video installations that investigate the concept of semi-darkness, extending its meaning to the uncertainty and shadow areas that surround our daily life.

It is the first exhibition ever signed by the In Between Art Film Foundation of Beatrice Bulgari, created to support experimental work in film, video, performance and installations. Eight works by artists such as Karimah Ashadu, Jonathas De Andrade, Aziz Hazara, He Xiangyu, Masbedo, James Richards, Emilija Škarnulytė are exhibited. 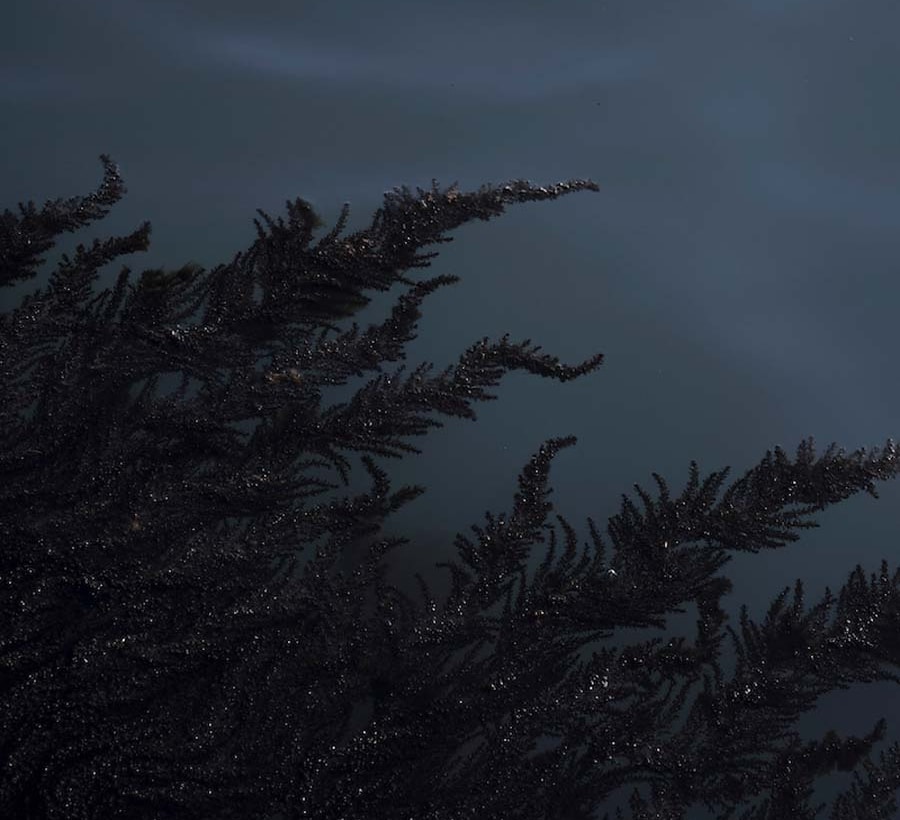 For years in Venice there was talk of nothing else. Now finally it's a reality: for the first time in five centuries of the Procuratie Vecchie history, a large part of the iconic building opens to the public after a long restoration signed David Chipperfield Architects Milan. Baptism is offered by the solo show of the American Louise Nevelson in which over sixty works created between the 1950s and 1980s are staged.

The exhibition is a tour de force : to admire it in its entirety you have to walk through the nine rooms on the second floor of the Procuratie. There are many works not to be missed. First of all, the monumental sculptures in painted wood, made since the 1950s. But the surprise comes from lesser known works such as the multiple column installation Dawn's Presence - Three from 1975 or The Golden Pearl, a very rare gold-colored sculpture made in 1962 even if it seems to have been made yesterday. 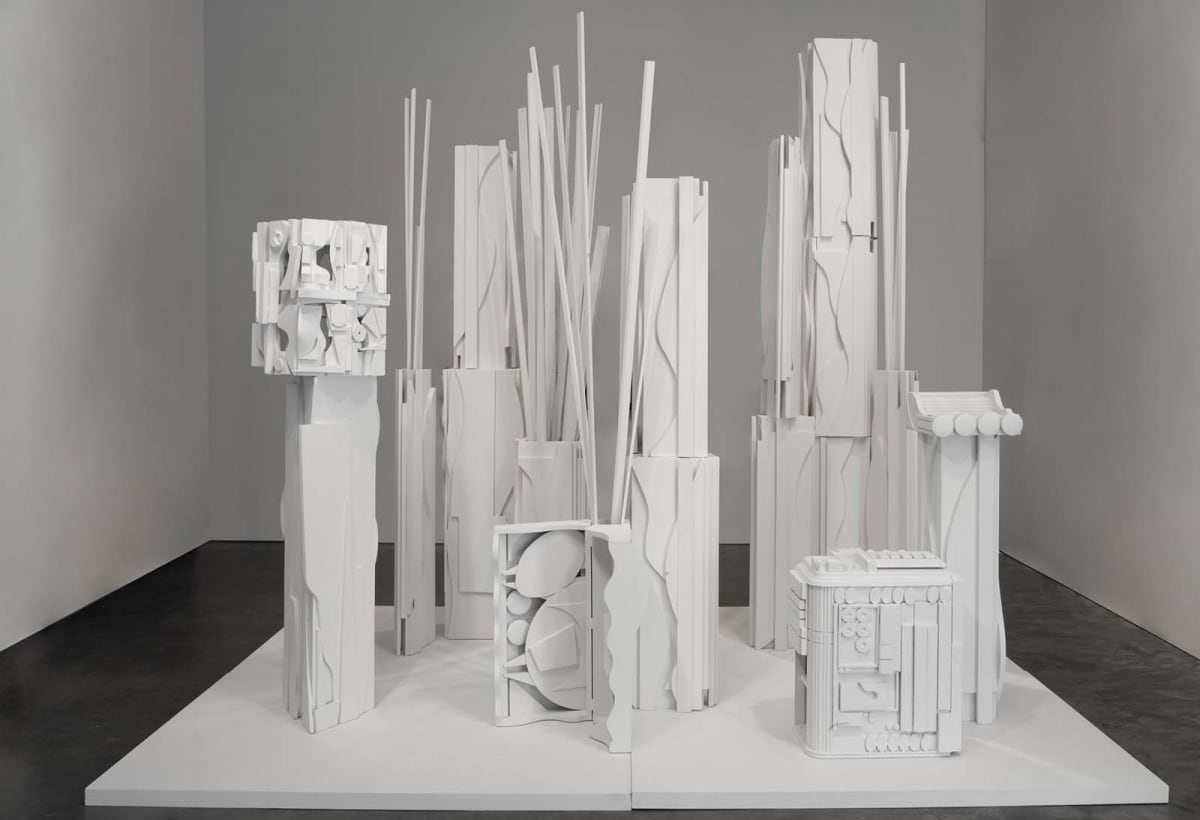