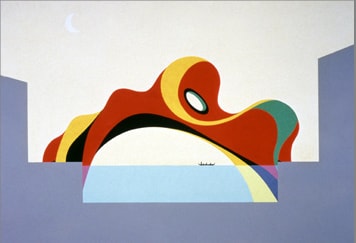 The exhibition narrates the history of Italian architecture in the second half of the 20th century as a whole, in a tale that temporal proximity and other factors have prevented from being told in a wider, more general perspective.

The main nucleus of the exhibition organized along the large curve of the ground floor of the Palazzo dell’Arte is composed of about 120 works, including original models and drawings, and albums that illustrate the design aspects in great detail. From Ludovico Quaroni to Ignazio Gardella, Aldo Rossi to Renzo Piano (and many others), works by the greatest protagonists of the history of Italian architecture, from the postwar era to the 2000s; as well as projects and works by less famous but equally important figures like Guglielmo Mozzoni, Paolo Soleri and Arturo Mezzedimi.

In addition to highlighting a linguistic variety unmatched by other countries, the exhibition addresses the deep bonds of Italian architecture with issues, territorial aspects and other disciplines, bearing witness to a rich, complex and unique history that at times has strongly influenced the architectural culture of other parts of the world.