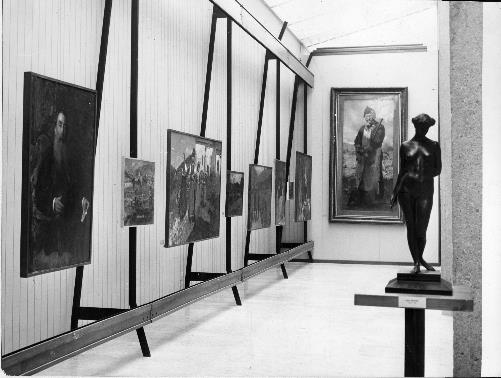 From 1940 to 1945, during World War II, Turin was struck by a long series of air raids and many zones in the city were damaged. One of them was the building from 1880 that contained the collections of the Galleria Civica d’Arte Moderna.

Dalle bombe al museo (curated by Riccardo Passoni and Giorgina Bertolino, from an idea by Carolyn Christov-Bakargiev) retraces the story of the birth of modern art in Italy, starting from the end of two decades of dictatorship and isolation.

The story of the reconstruction of the Galleria d’Arte Moderna in Turin – designed by Carlo Bassi (1923) and Goffredo Boschetti (1923-2013), during the period in which Vittorio Viale (1891-1977) was the director – can be seen as an example of the reconstruction of Italy, with extraordinary vitality and energy, starting in 1945 and across the following decades.

Over 60 works along with 90 period photos and a large selection of architectural drawings, original letters and documents.