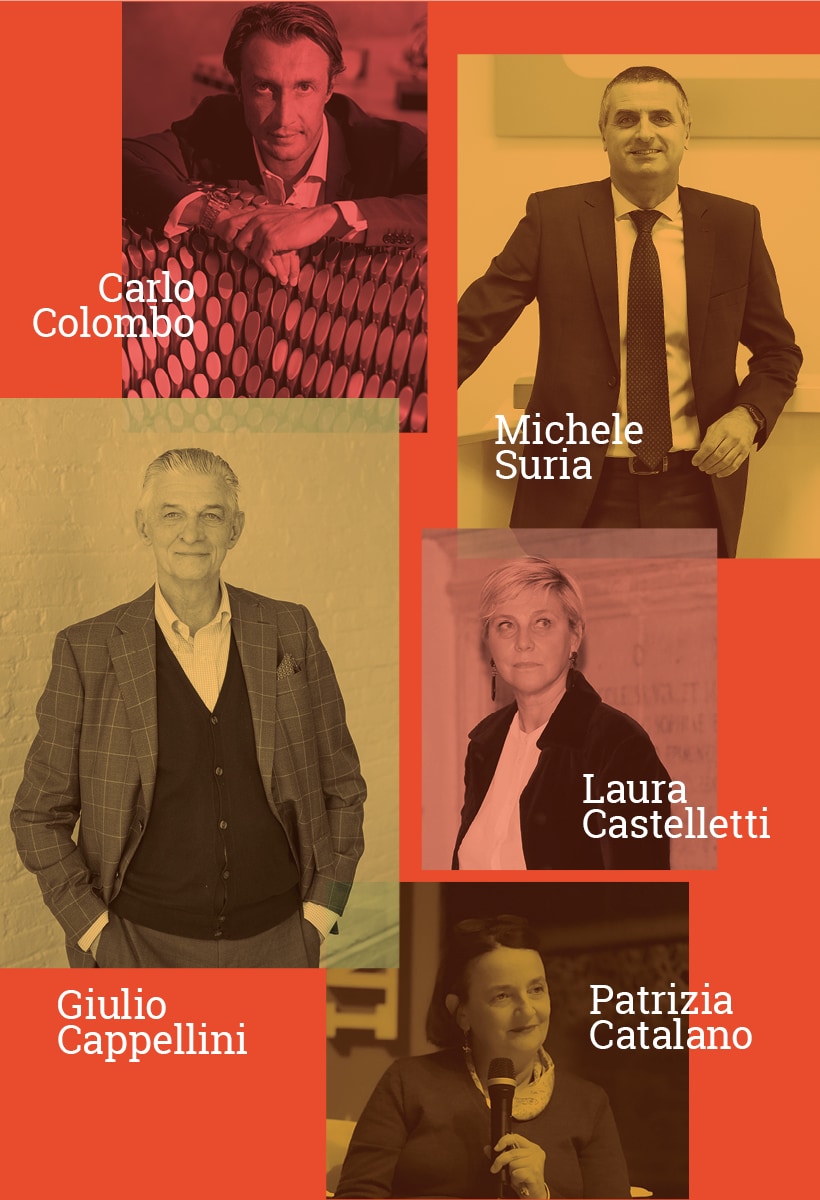 The elevator is undoubtedly the ‘machine’ that more than all others has conveyed a sense of novelty in architecture. It has been the symbol of modern housing, as well as an indispensable factor for the vertical growth of cities in the 20th century. Fashions and styles have dictated its look and character, while technology has defined its functions, based on constant research and progress. Thanks to its identity as a space capable of crossing other spaces and connecting them, the elevator has stimulated the imagination of filmmakers and writers. But it is often also a neglected, aseptic place, a ‘non-place as Marc Augé would put it, and in the Covid era it is avoided as a location of possible contagion. To rethink places apparently lacking in strong semantic value represents one of the missions of the new contemporary world.

GIULIO CAPPELLINI
designer and art director
°
Trained as an architect in Milan, he is an emblematic figure in the international design panorama. Cappellini’s work covers a vast array of furnishing elements. Through his most ambitious project, his company Cappellini has become a bona fide trendsetter, such that he has become universally recognized as a talent scout for young professionals. Cappellini is also Art Director of brands Ceramica Flaminia, Icone Luce, IGV Group, Istituto Marangoni Design Campus and an ambassador of Istituto Marangoni. He also teaches as a visiting professor at many schools of architecture and design around the world, and organizes exhibitions and events with various institutions.
LAURA CASTELLETTI
Deputy Mayor and Councilor for Culture, Creativity and Innovation, Municipality of Brescia
°
Born in Brescia, until 1992, she worked at the Institute of Pharmacology of the Faculty of Medicine of the University of Brescia. Elected city councilor in 1991 she was re-elected in 1998 becoming President of the City Council, a position she held until March 2008. In April 2008 she was elected councilor on the list "Laura Castelletti Mayor" and Vice President of the Town Planning committee. From 2013 to 2018 she held the role of Deputy Mayor of Brescia with delegation of cultural activities, museum system and urban librarian, relations with cultural promotion institutions, tourism promotion of the city and twinning, innovation and new technologies and smart city, role and proxies were reconfirmed in 2018. She gave life to the "Brescia per Passione" Association.
CARLO COLOMBO
Architect and founder studio A++
°
Considered one of the most productive Italian architects and designers, since the beginning his career has been characterized by collaborations with the most famous Made in Italy design brands, which include, among others, prestigious names such as Flexform, Poliform, Giorgetti, Cappellini, Antoniolupi, Poltrona Frau, Flou, Penta Light, Elie Saab, Bentley Home, Bugatti Home, Trussardi Casa, Olivari, Faber, to name a few. With his studio A ++ he deals with large-scale projects in Italy and abroad, from product design, interior design and architecture. He also oversees the development of corporate strategies and product marketing, graphic projects, he is curator of exhibitions and artistic director of the brands that see him as protagonist. For their high artistic value, his projects have been awarded countless prizes over time. In 2011 he taught design at the DeTao Masters Academy in Beijing.
MICHELE SURIA
CEO IGV Group
°
He graduated in Business Administration from the University La Sapienza in Rome and gained an MBA from SDA Bocconi with specialization in strategic management and finance. He is an expert in Management Consulting and Management of Small and Medium-sized Enterprises. He has extensive experience in the consulting field working for Deloitte Consulting, Accenture, BIP, Telecom Italia/Tim, Vodafone, Siemens, Ferrari, Coin, Camozzi Group, Ansaldo, Biasi and various SMEs, managing finance, marketing, customer care, business development and process re-engineering projects. He held roles of Chief Financial Officer at Implanta SpA, owned by private equity Argos Soditic, a leading company in the dental services and manufacturing sector, and for the Italian Creation Group, whose subsidiary, Driade, specialised in home design, he was appointed Chief Operating Officer. Since January 2019, he has been Chief Executive Officer of IGV Group.
PATRIZIA CATALANO
Journalist
°
Architect, professional journalist, she was responsible for the design and architecture section of the weekly IO Donna, the annex of Corriere della Sera and collaborated as a freelance for important national and international newspapers (AD France, The World of Interiors, Marie Claire Italy, Corriere della Sera). For many years he has collaborated with Interni Magazine, where he coordinates the Interni Annual attachments and the international events of the magazine (Barcelona, London, Madrid, Miami, New York). He has published volumes on the theme of living for Rizzoli Italia, Rizzoli New York, Mondadori Arte and Electa. Lives and works in Milan.
#Agenda

Baroque and Neo-Baroque in September in Ragusa