We talked about the body with Elmgreen & Dragset

We talked about the body with Elmgreen & Dragset

In conversation with Elmgreen & Dragset at the Prada Foundation where their gigantic Useless Bodies installation? it offers itself as a dystopian and poetic reflection on the role of the body in the digitized world

Useless Bodies? It is a title, but first of all it is a provocation, which takes flight from the final question mark, with which the Scandinavian artists Michael Elmgreen and Ingar Dragset, at the Fondazione Prada in Milan, until 22 August, invite us to draw our, very personal, conclusions on the fact that bodies in the age of screens have, or not, become useless.

“Yes, you got it right, that question is for the public”, they tell me with a smile on their lips, “because each of you can have much more intelligent ideas than ours”. They took 3 thousand square meters to let us enter a dystopian film, as protagonists, and we will take days and months to make room for the question marks that will spontaneously arise within us. 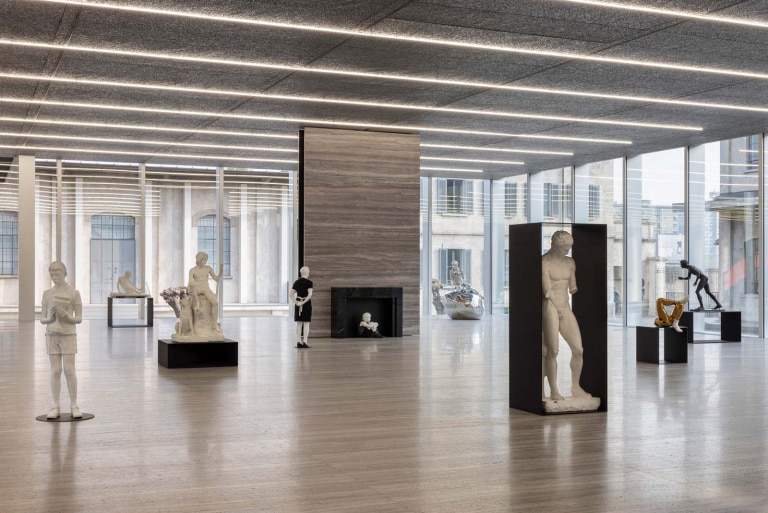 Because their installations have always been visual metaphors of social unrest, powerful images staged with subversive humor and surrealist nonsense. This also happens in this case, where the consequences of our alienation from ourselves (and from reality?) Are taken to the extreme.

And it is precisely for this reason that we must experiment with them, to seek, together with the artists, new answers, new hopes and new endings to their paradoxical stories, of which, whether we like it or not, we will be protagonists.

And they never abandon us, on the contrary, to help us build our story they leave us many clues hidden in the halls as would happen in the best thrillers, small twists that make us laugh in the midst of so much desolation. You want to reach out and take those objects, scattered notes, a self-help book written by a psychologist, statuettes by Karl Marx, coffee glasses apparently abandoned by who knows who (because there is no one around), to find out who is behind it and how those stories, which are ours, end up.

On display there are grandiose and apocalyptic settings in which visitors move like actors within a human comedy. How does your background, in poetry and theater, influence your installations?

Michael Elmgreen: "We have always kept the public in mind while we were preparing the exhibition, because for us the visitor is co-performer, co-creator and co- author with us. It is designed to immerse people in the scenes.

In the Podium, where we set up an office, we left on the desks some clues of those who work there such as books, notes, objects, statuettes, precisely so that those who pass us will be involved in the story and imagine its possible developments. In the North Gallery there is a domestic interior of the future that prompts you to identify with the family that presumably lives in that house" 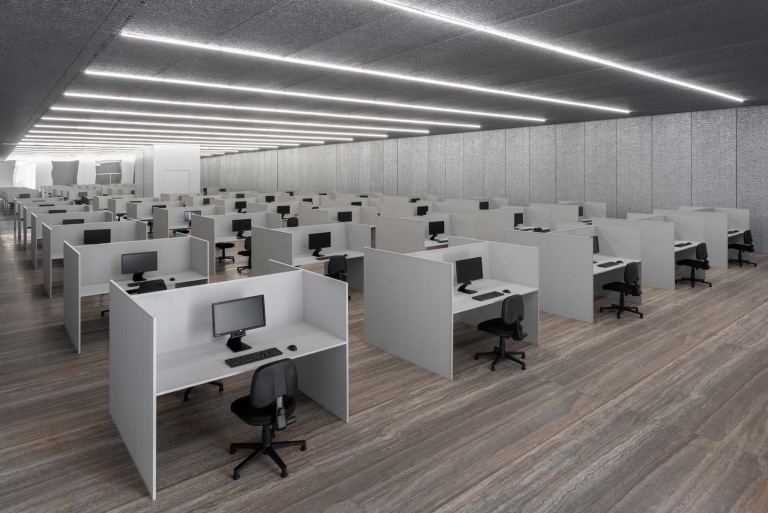 Ingar Dragset: “We love cinema and scenography, which play a fundamental role in the exhibition. Because movies are two-dimensional, you can't jump into the screen and be a part of it. And that's exactly why we make our installations, you can enter and you can finish the story yourself. We give a body, a real setting to the films and, at the same time, a story open to visitors".

Your sculptures are bodies, but at the same time you live in a world where bodies no longer seem necessary, how do you experience this short circuit and how do you tell it in your works?

M.E.. “Our generation is experiencing emptiness, loneliness and melancholy, we have been forced to move our lives online, more and more. This was our starting point, putting this feeling in dialogue with the spaces of the foundation, with the curators, with the whole working group.

We asked ourselves where is the body going with this assumption, is it really possible to continue accelerating this mechanism to a breaking point where we really forget it completely? Or will we find a balance? The point is that we don't have ready-made answers, ours is an invitation to reflect.

We are not against technology, but we must begin to find new ways and new balances so that people continue to maintain their dignity, their value and the pride of human beings, things that today we are really losing".

I.D. "The exhibition could also be called The Problem with Space, because when it comes to the body, the real point is that we don't have enough space. It can be seen in offices, where people work more and more squashed on top of each other, in as few square meters as possible, they call it "optimization of human resources". Now the extreme consequence is that there is no longer even a need to have people in workspaces . After the pandemic, companies have realized that they can stop paying rents because people can work from home.

And thus was born the problem with the house, which was previously the place of recreation, our private space and now has been invaded by the eyes of others , by their judgment, from all kinds of social media, and has become a public space. Thus, in times of selfies culture, many people use their homes only as a showcase for the public, not because it is comfortable and welcoming, but because it is shared and of great effect. They will look more like a showroom than a place for contemplation, where you can live your life and not the reflected image that others have of you.

Many objects in the house we have set up are on the border between design and sculpture, there is a steel kitchen inspired by the works of Donald Judd, we have translated his sculptural language into a super modern environment, where every furniture is beautiful but uncomfortable, it is a house where you can die before you start living in it.

It is a fusion of a spaceship, a bunker and a science laboratory, because there are many wealthy people who pay to have entire houses that look like bunkers, even underground, in the desert, spend millions to build shelters or invest capital to go to space. see what will remain, perhaps, of their future".

The world we live in could be a simulation. How worried should we be? Or what can we do to invent a different future?

M. E. "We should always worry, especially in a time when technology is so fast that it is difficult to understand what is really going on. In the nineteenth century the human body was an active part of the production and creation of goods, then we became consumers, in the twentieth century, and now we ourselves are the product from which to extract data, in which all our daily rituals are observed, indexed and become a source of investment. We need to be more aware, to act together and to be represented, individually and collectively".

In the Podium, on the first level, there are classical sculptures in dialogue with contemporary alter egos, they look each other in the eye. Is there something they want to tell us that is not usually said?

M.E. “We have recreated a sort of meeting between sculptures from different times, between the classic and the new figurative, beyond history. They want to tell how virility has been represented over the centuries, because we have a false perception, in our imagination the historical representation of man is heroic, macho, but it is not so in reality, it is only nineteenth-century art that promoted this image of what man should be like.

It is a mistake to say that in ancient times man was a real man and that today he is different, it was so only for a very short time that he rewrote the history of art according to a binary logic and of genus. And on display are examples of this not being the case. Dreaming bodies, which hesitate, which have fear and loneliness in their eyes".

A plaque bearing the title of the exhibition has been sewn onto the uniform of the museum staff. Why?

M.E. “We have often transformed the spaces and the people who work there, talking to them. Here, although they wear the same uniform they usually wear, we thought of a slightly different role. Because they themselves could be replaced by robots or CCTV cameras, but instead they are important, they are fundamental for many reasons. So let's extend the exhibition question, to ask ourselves, what do we mean today by the definition of "useful work", why what people working in the museum should be Useless Bodies?"

In the Cistern you have staged the wellness industry, but the spa, the swimming pool and so are empty and desolating rooms. Why?

M.E. "The wellness industry wants to make sure we never feel satisfied, it asks us to continually improve, but it always reminds us that we are not perfect enough, it is an endless loop in which no one is ever happy". 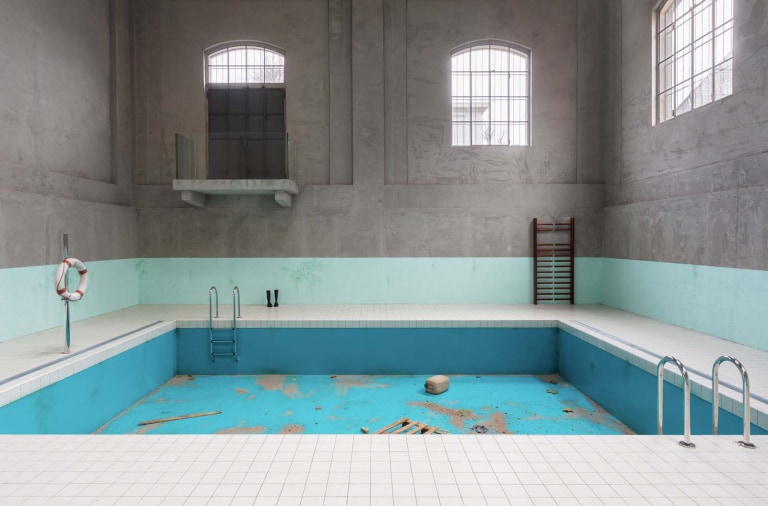 How would you like those who see the exhibition to come out?

I. D. "I hope they have very different experiences of the exhibition, the two of us are only here to provide a platform for discussion and interpretation of what is going on. Indeed, we hope they come up with much more intelligent ideas than ours.

Here we stage a surreal world, but we also leave room for irony, humor, to give hope, an optimistic vision, through the details and clues that we insert in the exhibition, which are small individual stories within the collective history. We can say that we are very cheerful misanthropes! And this is the grand finale of the exhibition