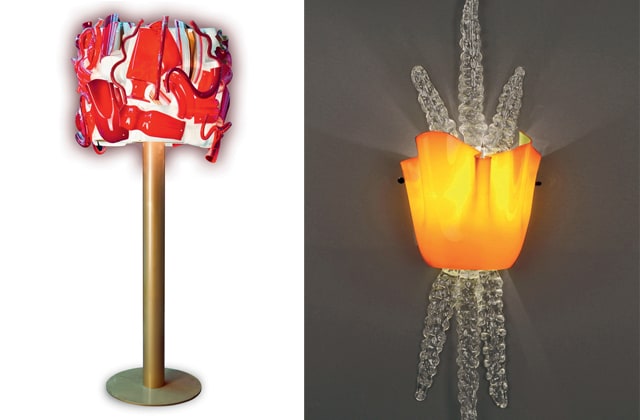 The latest project by the Campana brothers for Venini is a vivid expression of the postvirgin, hybrid design of the two brothers from São Paulo, a slow aesthetic explosion of fragments generated by excess energy and colliding stimuli.

Reality and representation are no longer parallel worlds that reflect each other, but smashed universes that collide and gather, like the pieces of two mixed-up puzzles. Borrowing from a wide range of available sources – from the favelas and the Brazilian jungle, for example – Fernando & Humberto Campana bring scraps of ancient material culture into design, intact in terms of semantic impact, made of resin, recycled leather, branches and, recently, shards of glass, as in the latest work for Venini, Fragments, a floor lamp composed of pieces of vases and historic pieces from the Murano glassworks. In a limited edition, in keeping with principles of sustainability and reutilization, Fragments is a good example of the Campana brothers’ approach to design: ‘mutant’ since birth, as they say, the two siblings from Brotas (a small town 250 km from São Paulo, where they still live and work) say they were influenced by Os Mutantes (a band that was a symbol of Brazilian tropicalism, mixing bossa nova and rock’n’roll) and by the various identities of the Brazilian scene. Their omnivorous, disruptive poetics eliminates any idea of a before and after of objects, a status as a ‘product’ or as a ‘scrap’, ‘trash’. Everything exists, from the start, in a condition of postvirginity, in which it can always be activated, used, granted, given. The fragment is the theme of other works they have done for Venini, like the vases and lamp of the Esperança series, in which instead of mixing things and people, they mix pieces of things and pieces of people to remind us that if – as Bruno Munari said – the tree is the very slow explosion of a seed, design is the very slow explosion of the world.