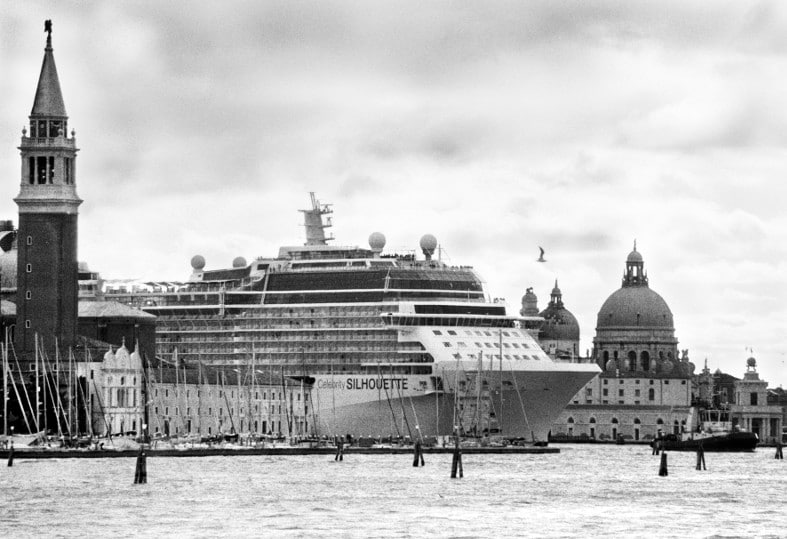 FAI (Fondo Ambiente Italiano), in collaboration with Fondazione Forma per la Fotografia and Contrast, presents an exhibition from October 22 to January 6 at the Olivetti store on Piazza San Marco, featuring thirty photographs by Gianni Berengo Gardin made in 2013 and 2014, showing the daily passage of large cruise ships in the lagoon of Venice.

The exhibition, already hosted by FAI at Villa Necchi in Milan in 2014, curated by Alessandra Mauro (Forma), includes some of the famous shots displayed on that occasion, while adding some less recent images of Venice in the catalogue, drawing on the repertoire of this outstanding photographer whose ties to the city go back to childhood.

Venice and Big Ships reaches the Olivetti store and puts an end to a lively media debate that raged this summer, due to the opposition of the mayor of Venice to the planned display of the images at Palazzo Ducale.

FAI is pleased to host this exhibition in Venice, as it had done in Milan, due to the unquestionable artistic value of the photographs, the work of one of the greatest Italian photographers, but also because they constitute an incontrovertible testimony of the current state of affairs in Venice, problematic in many ways. The city of Venice, a treasure cherished by Italians and the entire world, is threatened in many ways, including by the presence of these huge cruise ships (see the repeated appeals made recently by UNESCO).

The exhibition of photographs, in the intentions of the author, documents the passage of large ships, without suggesting alternatives. The implacable black and white photographs of Gianni Berengo Gardin, as always in his work, apply a sensitive, critical gaze to reveal the contrasts of reality, society and landscape, represented without filters or attenuation, in their raw essence.

The exhibition will be accompanied by a book published by Contrasto.