On display in Padua, illusions as art: you won’t believe your eyes!

On display in Padua, illusions as art: you won’t believe your eyes!

An exhibition brings to Padua some of the main exponents of kinetic art, between science and creation. Until February 26th

Vision is not neutral: the brain reconstructs what the eye sees, and can deceive it.

There are numerous techniques that lead visitors to the exhibition L'occhio in gioco. In Padua, at the Palazzo del Monte di Pietà in Piazza Duomo, until February 26th.

Let yourself be fooled!

On display, the art of deceiving the eye. A journey, from the Middle Ages to the contemporary age, which captivates the public by making it an active part in the enjoyment of the 420 works by the 125 artists on display.

From 1200 to today. From ancient miniatures to celestial maps. The spherical astrolabes juxtaposed at the Bauhaus. From optical science to color theory, via Gestalt psychology. The studies of the philosopher Wolfgang Goethe or the romantic painter Philip Otto Runge. Again, Paul Klee and Vasilij Kandinsky, Georges Seurat and Umberto Boccioni, Giacomo Balla and Frank Stella.

In cinema, the inventors of one of the most successful deceptions of seeing, such as the Lumière brothers, and then Man Ray. In photography, the research on the movement of Anton Giulio Bragaglia or the inventor of the shutter Eadweard Muybridge. Protagonists of the short century (and of colour) such as Alexander Calder and Marchel Duchamp, Bruno Munari and Victor Vasarely, father of Op Art.

In the city of Galileo

Organized at its headquarters by the Cassa di Risparmio di Padova e Rovigo Foundation, in collaboration with the University of Padua, the exhibition celebrates the 800 years of life of the 'Atheneum.

And he certainly could not fail to pay homage to the School of psychology of perception, which laid its foundations in the city in 1919, with names such as Vittorio Benussi, Cesare Musatti, Fabio Metelli and Gaetano Kanizsa.

A fertile humus which in the 1960s contributed to making Padua emerge on the international scene of the avant-gardes of optical-kinetic art. The artist from Trieste, Padua by adoption, Marina Apollonio (now at the Venice Biennale in the Technologies of Enchantment capsule) and the N Group , born in Padua to Alberto Biasi, Ennio Chiggio, Toni Costa, Edoardo Landi and Manfredo Massironi ('Gestalt art' for the critic Carlo Giulio Argan).

Works to which a large monographic space is dedicated, as well as five installations that "invade" the city: Spazio ad Activazione Kinetica, a dizzying five-meter B/W spiral by Marina Apollonio, in the Cortile Antico of Palazzo Bo (which was also the set of a hypnotic choreographed dance); the two virtual Hypercubes and the Quadrato Cinevisuale by Edoardo Landi at the Botanical Garden; You are by Alberto Biasi, at the Museum of the History of Medicine.

"Many move the painting to see what is behind it, the movement it creates is so real – comments Alberto Biasi – The participation of the spectator creates a situation that does not exist and takes it as real. As the critic Dino Formaggio said, 'the works dance, and dance with you'". 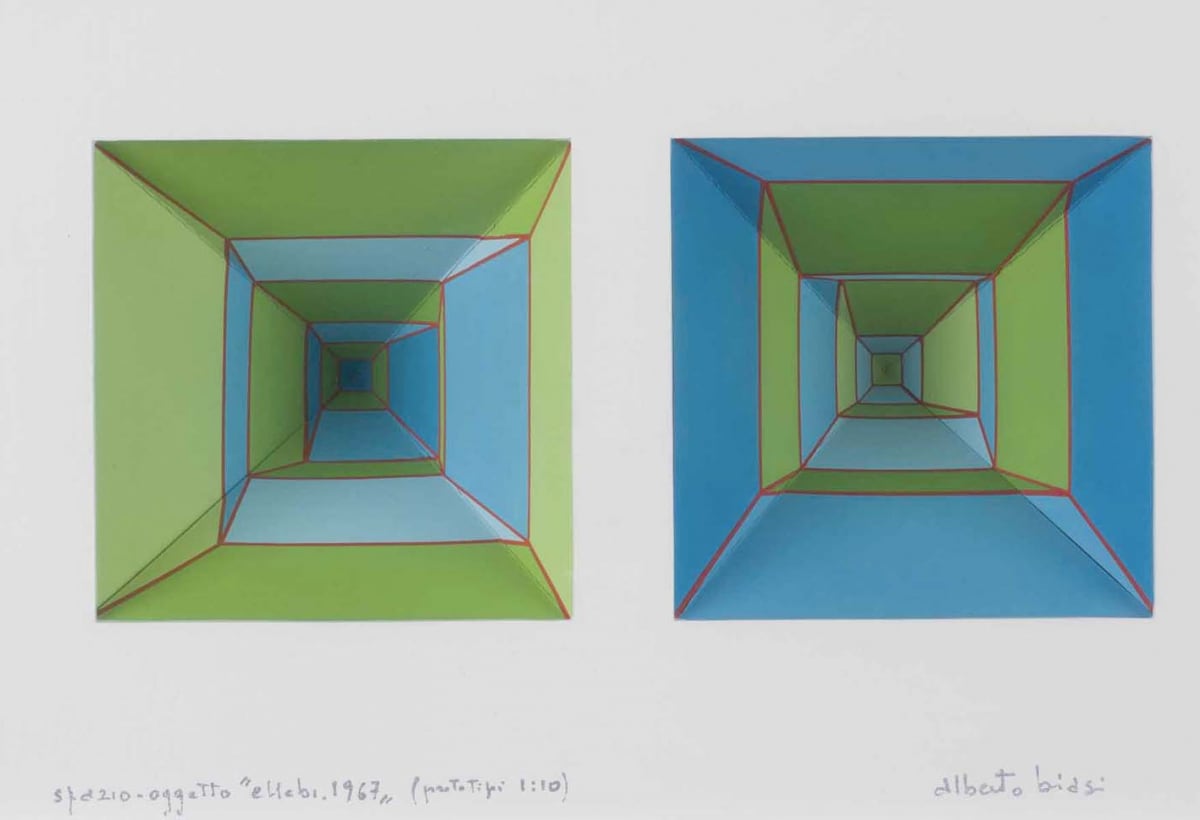 6
Alberto Biasi, Space-object hellebi (Prototype on a 1:100 scale of the environment created for the exhibition The Space of Imagination (Foligno, 1967)) Padua cardboard, artist's collection © Alberto Biasi, by SIAE 2022

"Group N has launched an artistic vein that presents works of art that do not envisage a contemplative art. The spectator participates in the work, and in the jargon of us psychologists, becomes its experimental object." Thus explains Daniela Mapelli, Rector of the University of Padua, recalling the 50th anniversary of the birth of the Courses in Psychology and applauding the original curatorial slant of the exhibition "on the border between and science, between color and movement".

A project that brought together the historical system of Luca Massimo Barbero and the work of several University Departments, with Guido Bartorelli, Giovanni Galfano, Andrea Bobbio and Massimo Grassi.

An integral part of the exhibition layout are also meetings with the public: with the artists Marina Apollonio and Alberto Biasi, the writer Tiziano Scarpa and the neuroscientist Giorgio Vallortigara.

Optical scarf around her neck, so Marina Apollonio was able to recall her relationship with her father, the art critic Umbro Apollonio, and her meeting with Peggy Guggenheim , which in 1968 bought Rilievo n. 505.

"The interest of my research is aimed at the investigation of a primary form, seeking the maximum result with the maximum economy. – Marina Apollonio explained - Now with the computer it is all different, but once it was all done by hand, for each work it took us months".

She who, still today, looks at her works of the past, "with a look to the future for those still to be done".

The eye in play - Perceptions, impressions and illusions in art: timetables, tickets and useful information for the visit