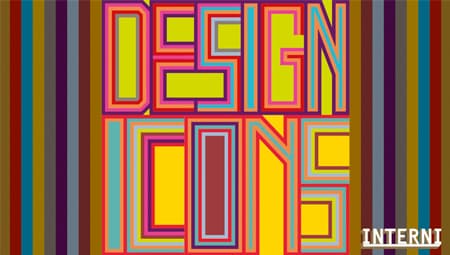 Italian Design Icons makes its debut from 29 November to 1 December during Art Basel Miami Beach 2016, in the context of the exhibition 1958, The Birth Of Two Legends: Italian Monochrome and Sanlorenzo Shipyard, organized on a Sanlorenzo SD112 (34 meter) yacht by Sanlorenzo, the nautical atelier founded in 1958, in collaboration with the gallery Tornabuoni Arte.

The publication, with an additional print run of 3500 copies in English with Italian translation, will be distributed in the city’s leading design showrooms.

Italian Design Icons continues with the history of Italian Design narrated by Interni in 2014, with the volume to celebrate the magazine’s 60th anniversary.

Following the same decade-by-decade timeframe, this story in images has the aim of promoting Made in Italy in the world through a series of critical reflections on creativity, the ability to intercept stimuli and ideas from design history, new products, global scenarios and the transformations of the production system.

The narrative of iconic products is enhanced by the words of 24 internationally acclaimed designers who indicate and explain their most important and representative projects, through a sort of design self-portrait.

The volume concludes with a hypothesis on what might be the icons of tomorrow, namely the products of the present that set new habitat trends, laying the groundwork for new expressive languages.

With 188 pages and critical essays (Cristina Morozzi, Marco Romanelli and Matteo Vercelloni), Italian Design Icons will be available starting on 6 December on newsstands, as a supplement to Interni December.