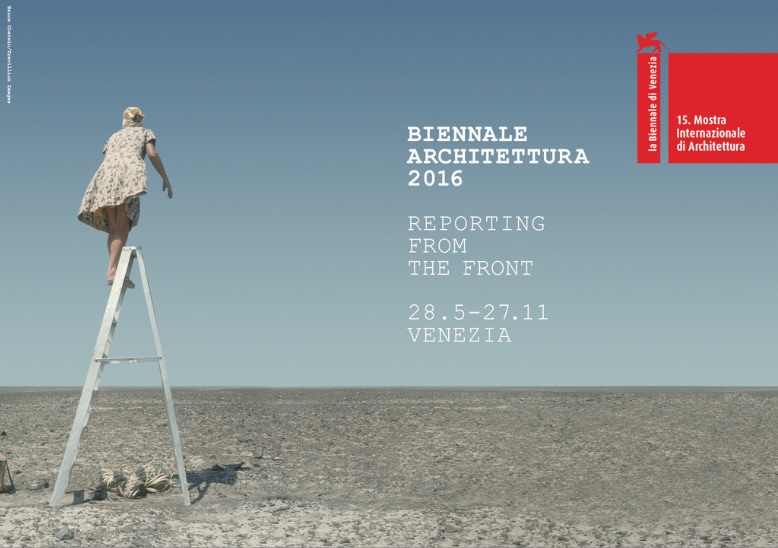 Open to the public from Saturday May 28 to Sunday November 27, 2016, at the Giardini and the Arsenale, the 15th International Architecture Exhibition entitled Reporting from the Front, directed by Alejandro Aravena and organized by Biennale di Venezia, chaired by Paolo Baratta.

The exhibition will form a single itinerary from the Central Pavilion (Giardini) to the Arsenale, including 88 participants from 37 countries. Of these, 50 are showing here for the first time, and 33 are architects under 40.

“The lady on the ladder, who climbing up onto the highest steps can gaze over a far broader horizon, and by doing so acquires an expanded eye, announces the Biennale Architettura 2016 curated by Alejandro Aravena. We immediately liked this picture – stated President Paolo Baratta – because in a way it represents la Biennale as a whole, with our attitudes and our goals.”

“In his trip to South America – says Alejandro Aravena, curator of the 2016 edition – Bruce Chatwin came across an old woman walking in the desert, carrying an aluminium ladder on her shoulder. It was the German archaeologist Maria Reiche studying the Nazca lines. Standing on the ground, the stones did not make any sense; they were just random rubble. But from the height of the ladder those stones became a bird, a jaguar, a tree or a flower.”

The exhibition will be accompanied by 62 national contributions in the historic Pavilions at the Giardini, at the Arsenale and around the city of Venice. Five countries are participating for the first time: the Philippines, Kazakhstan, Nigeria, Seychelles and Yemen.

Padiglione Italia at the Tese delle Vergini in the Arsenale, supported and promoted by the Ministry of Cultural Heritage Tourism, General Directorate of Contemporary Art and Architecture Contemporary and Urban Suburbs, will be curated this year by Simone Sfriso, in the curatorial team of Massimo Lepore, Simone Sfriso, Raul Pantaleo TAMassociati.

“The advancement of architecture is not a goal in itself, but a way to improve people’s quality of life. Given the fact that life ranges from very basic physical needs to the most intangible dimensions of the human condition, improving the quality of the constructed environment we have to act on many fronts: from guaranteeing very concrete, down-to-earth living standards, to interpreting and fulfilling human desires; from respecting the individual to taking care of the common good; from efficiently hosting daily activities to expanding the frontiers of civilization,” Aravena said.

The exhibition curated by Stefano Recalcati, entitled Reporting from Marghera and Other Waterfronts, will analyze – in the exhibition facility of Forte Marghera (Mestre, Venice) – significant projects of urban regeneration of industrial ports, helping to stimulate reflection on the productive reconversion of Porto Marghera.

The collaboration agreement with the Victoria and Albert Museum in London takes its first step in the Pavilion of the Applied Arts at the Sala d’Armi of the Arsenale, with the title A World of Fragile Parts, curated by Brendan Cormier.

Finally, looking forward to the United Nations Conference Habitat III, to be held in Quito, Ecuador in October 2016, and in the context of the Urban Age program, organized jointly by the London School of Economics and the Alfred Herrhausen Society, the Biennale will set up, again at Sale d’Armi, a pavilion on the issues of urbanization, Report from Cities: Conflicts of an Urban Age, with a particular focus on the relationship between public and private spaces, curated by Ricky Burdett.