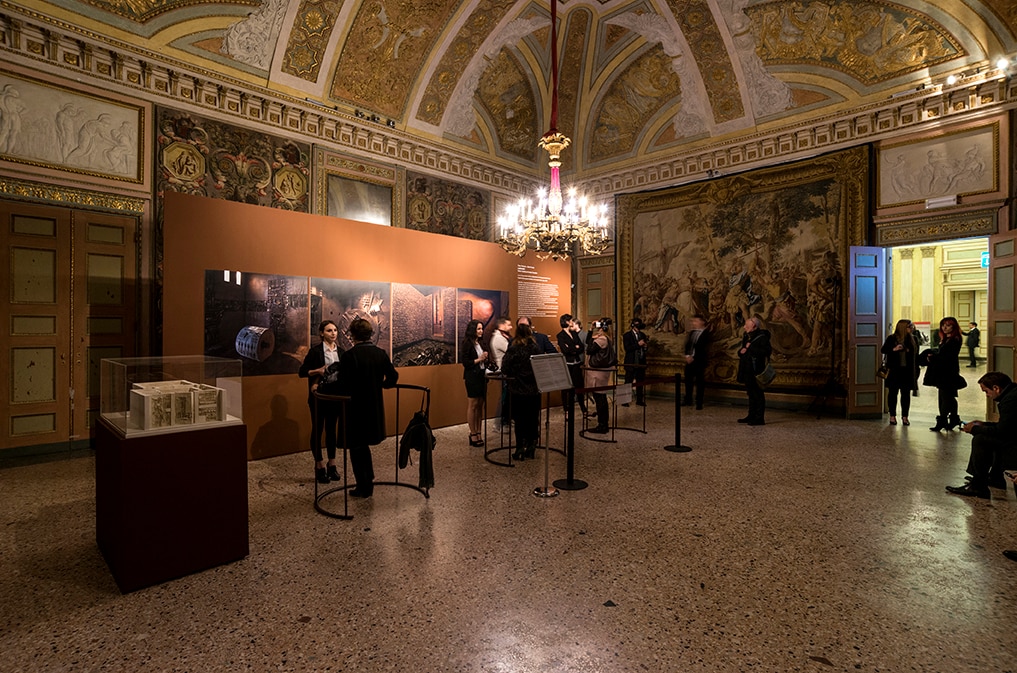 To celebrate the 90th birthday of Arnaldo Pomodoro, the Sala delle Cariatidi at Palazzo Reale becomes the fulcrum of a major retrospective that takes place around Milan, in some of the city’s most prestigious exhibition spaces: Palazzo Reale, Triennale di Milano, Fondazione Arnaldo Pomodoro and Museo Poldi Pezzoli.

The heart of the initiative is the exhibition at Palazzo Reale which presents about thirty sculptures made from 1955 to the present, selected by the artist himself to represent the fundamental phases of his long career.

In the Sala degli Arazzi, during the period of the exhibition Arnaldo Pomodoro, visitors can take a virtual reality tour of the environmental work Ingresso nel labirinto, installed in the underground spaces of the former Riva-Calzoni factory at Via Solari 35 in Milan, which was previously the headquarters of the Foundation.

Labyr-Into is the free interpretation of the work in a 3D version, like a work within a work. The virtual reality environment with its interactions has been created by Oliver Pavicevic, starting with 3D photometric scanning of the original spaces. The sounds are by Steve Piccolo, who has used textural sounds recorded inside the labyrinth itself to achieve a holophonic effect. Rather than a soundtrack, the sounds are triggered by the viewer’s movements inside the virtual maze.

Visitors are invited to explore the virtual and interactive version of the labyrinth in a multisensory experience, in two different versions using two distinct technologies: Gear VR and HTC Vive.

A project curated by Eugenio Alberti Schatz in collaboration with Fondazione Arnaldo Pomodoro, with the support of TSS (The Secular Society, Virginia, USA).