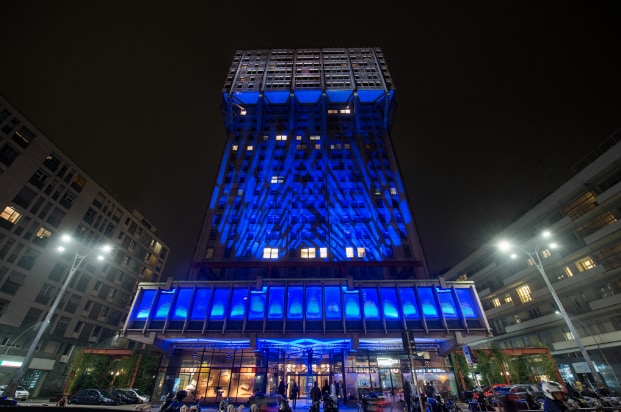 Torre Velasca, owned by Gruppo Unipol since 2012, returns as a protagonist of the city of Milan and its future. For the holiday season, Gruppo Unipol continues the activities of enhancement of Torre Velasca that began with Opening Velasca, the project during Expo that has returned the tower to its status as a central location of Milanese culture.

Until April, the tower is the new protagonist of a cultural project supported by the City of Milan, and various sector associations – including Confcommercio Milano – as well as corporate partners.

Lights and Music at Torre Velasca happens both outside and inside the tower, in two sections: a luminous installation (on the central facade of the tower and the plaza in front of it) and a multimedia installation inside the exhibition space, with evocative set design reproducing images of the history of the building.

Projections with luminous effects and drawings will light up the two corner buttresses and the upper part of the entrance facade. The rectangular window above the main entrance will also be lit, along with the ground in front of the main entrance and the ceiling of the lobby. The lights will be on every day from 17.30 to 23.00.

The installation inside Spazio Velasca calls for a sequence of veil-like screens on which to project images in an original visual itinerary. These videos (telling the story of the tower, the society in the historical period 1950-1959, the history of design, graphics and painting, images from films set in Milan featuring the Torre Velasca) create evocative apparitions on the veils, offering doubled images and new perspectives, in a sort of kaleidoscope that envelops the viewer. Access is free of charge, Monday to Friday, 17.00 to 21.00.