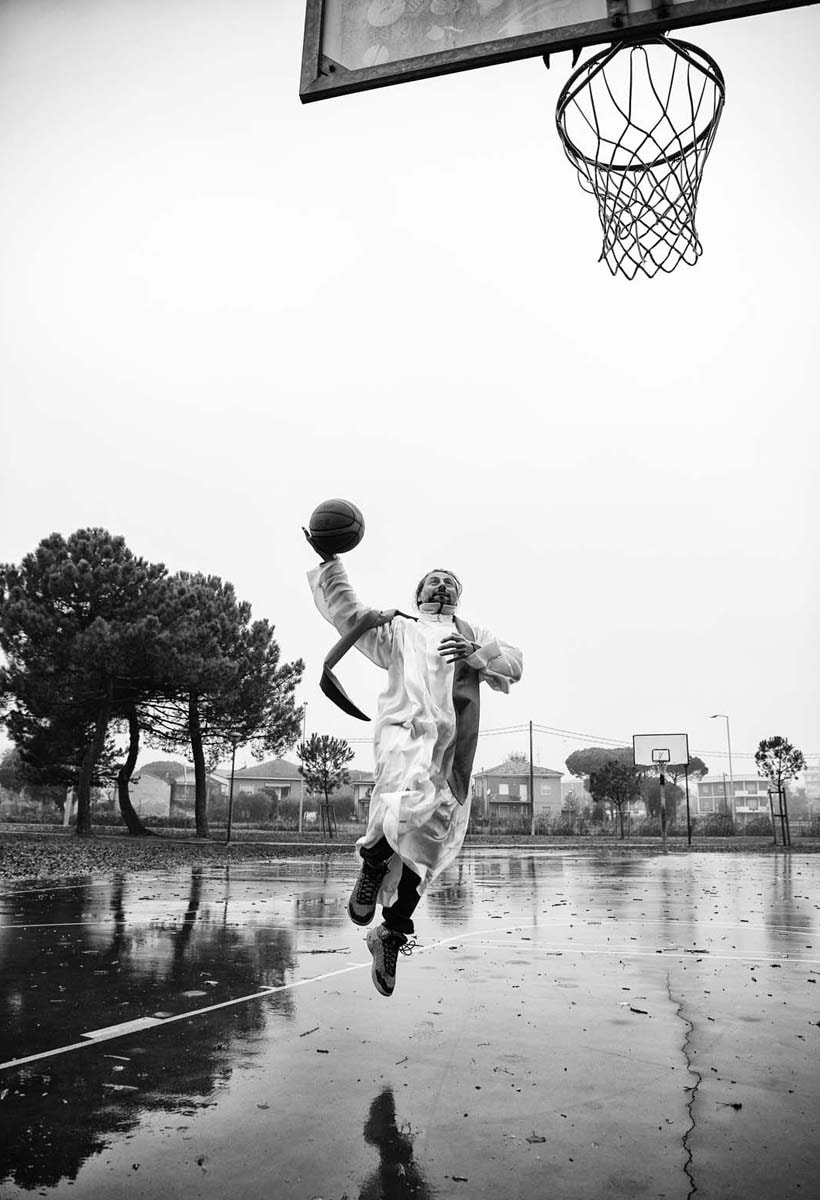 What personality hides behind the cassocks of nuns, priests and friars intent on sports? This question is answered by Stefano Guindani's exhibition, curated by Denis Curti, at Leica Store Milan in Via Mengoni 4

They play soccer, volleyball, basketball; practice tennis, golf, judo, boxing; engage in surfing, cycling, athletics. Mens sana in corpore sano is the exhibition by Cremona-based photographer Stefano Guindani featuring men and women of faith engaged in sporting activities, albeit in cassocks, in collaboration with Leica Camera Italia in the renovated Leica Store Milan at 4 Via Mengoni and curated by Denis Curti, from Sept. 23 to Dec. 2022. 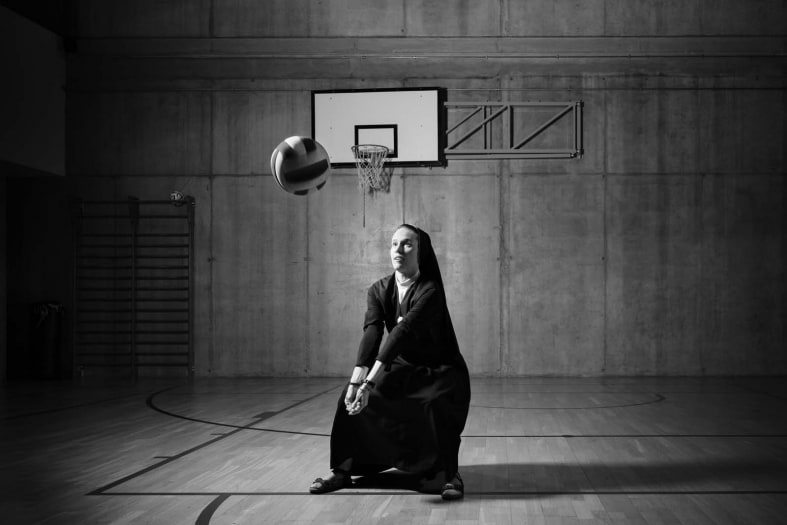 An investigation and communication project

Guindani's is an investigation and communication project that aims to tell the story of who is really behind men and women of faith: priests, nuns, friars. Often seen as subjects detached from reality, included in roles that appear so cumbersome that they manage to eclipse their personalities. Here, then, is the priest in a cassock gazing out to sea with a surfboard under his arm, the silhouette of a nun dribbling in the courtyard, a rock-climbing faced with the awkwardness of a habit that is not conducive to mountaineering activity. The photographs in the exhibition leverage the human aspect of the subjects, painting their dedication and predisposition for fun, united by a disruptive vitality. Guindani makes the viewer a participant in each story he tells: suspended moments, hinted smiles, deep black and white, essential color combinations manage to make the viewer perceive the person behind God's minister. We asked Stefano Guindani (author) and Denis Curti (curator) to tell us about the concept of this exhibition. 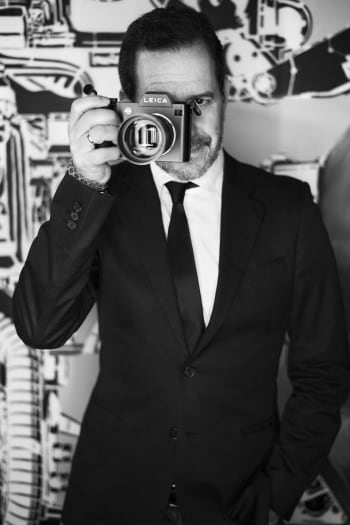 Stefano Guindani: a research on the world of religion today

"The project Mens sana in corpore sano was born as a tribute to Mario Giacomelli and is a research on what is the world of religion today. Religious people are often seen as people closed in churches, isolated from the rest of the world: I wanted to show that there are situations in which they try to bring faith outside the canonical walls of the church and seek sports aggregation," the photographer says.

What is the real personality that is often eclipsed behind the cassock of nuns and priests?

"Personality changes from person to person, just as it is in everyday life for anyone: there is the religious man who wants to be more of a protagonist, but there is also the more timid one, with whom I had to insist in order to film him in this sporting activity of his. Many men of faith live sporting activity as a moment and method of aggregation, a tool to involve more people; some then also focus on competitive activity, but I think this happens for anyone who plays a sport." 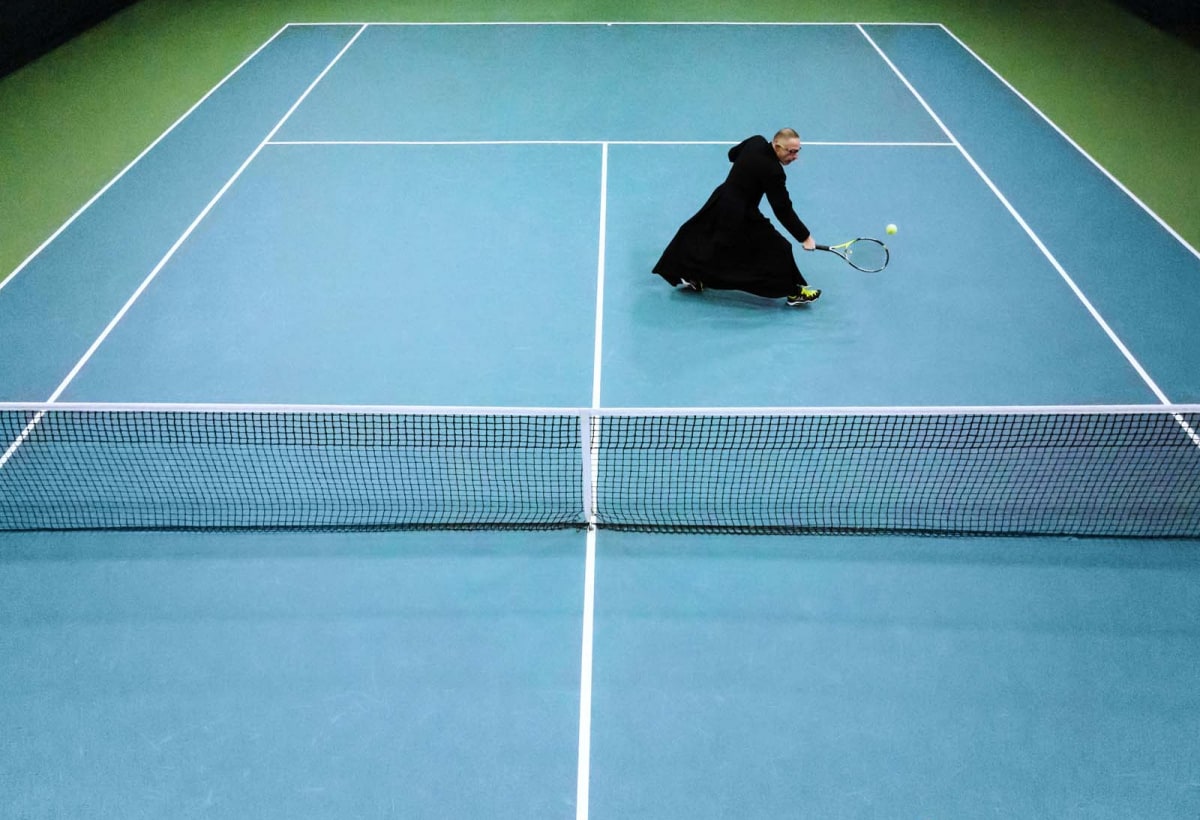 Are there any photos that, more than others, are worth highlighting?

"Priests, nuns and friars that I photographed were very different from each other: some very happy to be photographed, others less so, others with whom I had to insist, and still others who really amazed me both for their sporting professionalism and for their rendering in the image. In some cases, already while I was shooting I was aware of the beauty, I think for example of the priest climbing or Sister Daniela dribbling against the light in her convent."

What was the guiding spirit of the project?

"It was not the search for irony, but the search for beauty in the image. The goal was to show a person who is normally thought of as extremely serious, closed in her church, engaged in a common, everyday activity, far from the canonical image. I then liked the idea that they were all strictly in cassocks, to bring it all together in a common, shared imagery. Sometimes we had to insist-because some people said that the cassock was worn only on certain occasions-but then they were all very happy to follow me in this project." 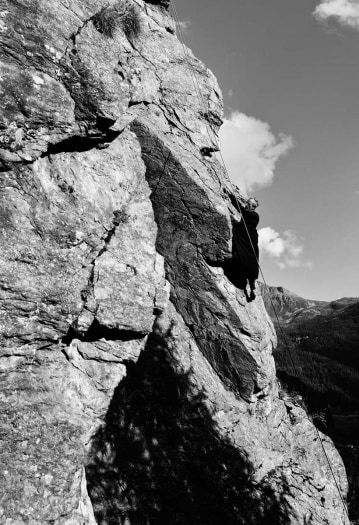 "Photographers are curious people. It all started because Guindani caught a particular situation, the one in which these religious people carry out sports activities. From here it started a real search throughout Italy for situations that had as protagonists priests, nuns, friars during the practice of sports. The model was that of the survey: a way to bring to a more credible level the dimension of faith and spirituality, telling how behind these clothes there are men and women doing what we all do. Surreal situations that struck Stephen, who asked these people to become accomplices. People, mind you, who are not actors, but religious people in the flesh who tell themselves as they are," the curator explains.

An original and peculiar project then...

"The precedent, the most illustrious example, as Stefano has already said, is that of Mario Giacomelli, who in the 1970s made the series of the "Pretini" who, with their black tunics, play and make gyrations in the snow. A tribute to the great master. Revisited with today's eyes. With great spectacularity, with the camera, with drones to be able to tell the context around the situation." 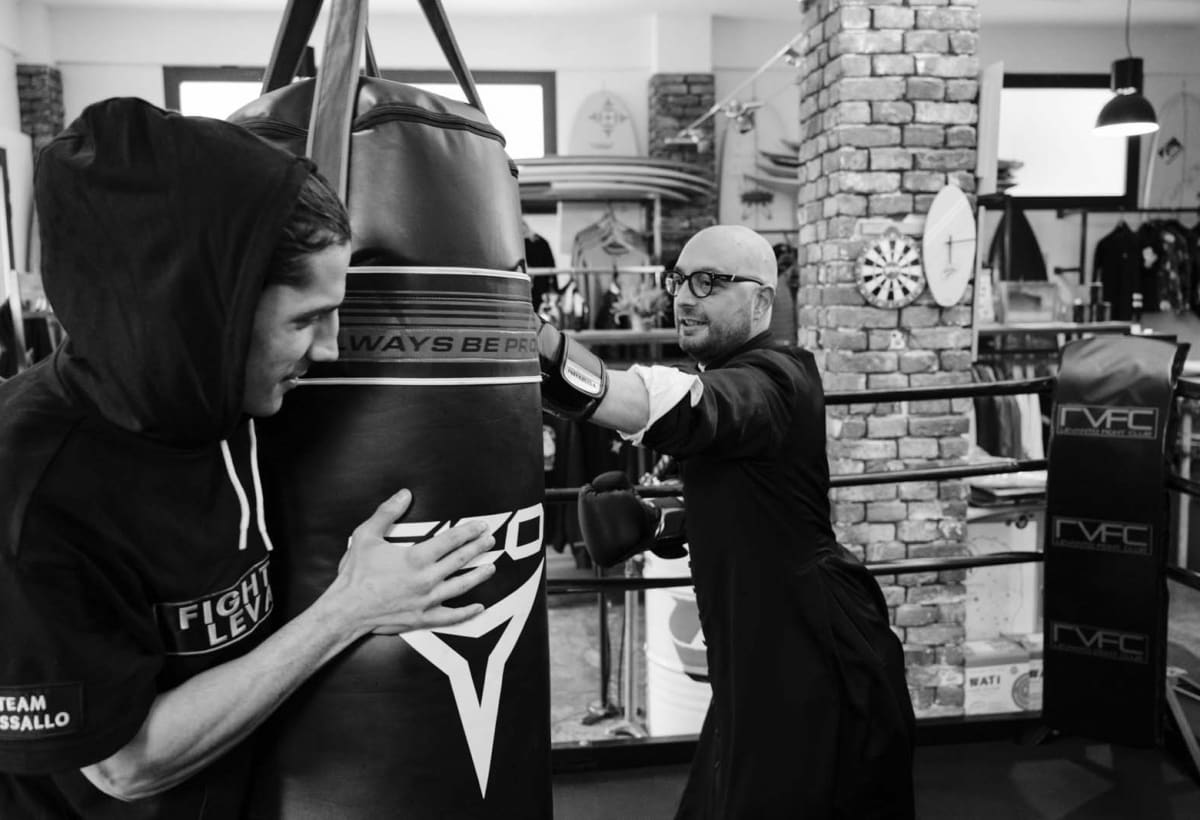 What was the reaction of these religious people to the proposal?

"I think the photographs tell it well, they speak for themselves. They obviously liked the idea of being able to be told in a situation of normality, welcome, sharing. There are those who accepted with pleasure and enthusiasm and those who did not and we will not see them in the exhibition. There are some sports practices where physicality, contact dominates: sports like judo, boxing, soccer itself. Some of these clergy teach these disciplines and their skills are made available to the wider community."

There is an underlying balance between black and white and color. Is this an intentional choice?

"It is an artist's choice that goes to emphasize an important fact: Today there is no longer a difference between black and white and color. There used to be a distinction between them that was almost authorial: they are no longer either that moment or that situation, the choice no longer makes a difference in language." 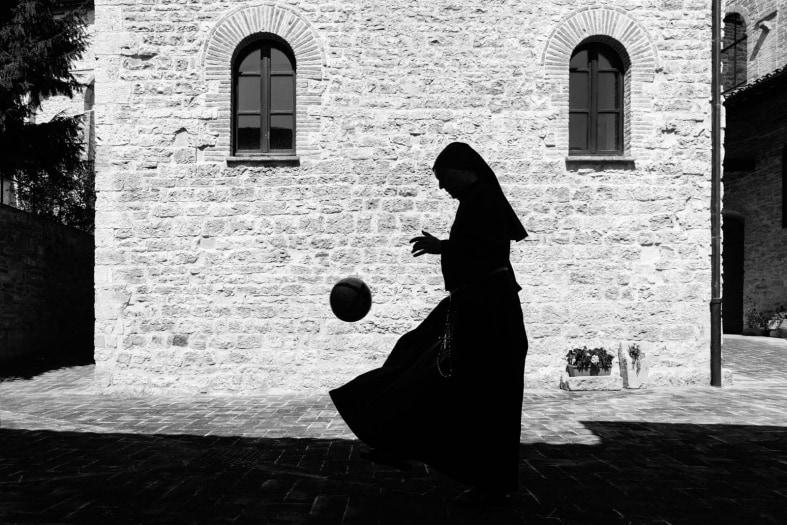 What was the criterion that guided the choice of some shots rather than others? Ultimately, what do we look at when we look at an exhibition? Because the photos on display represent only a part of the work....

"I worked by choosing the photos that I felt were more homogeneous with each other, more spectacular, always paying attention to the fact that you are telling a story in its various facets. So there are very powerful photos that relate these people to the territory, other times I paid more attention to the athletic and sporting gesture that could intrigue and make people question. The criterion looked at both spectacularity and the telling of a good story to tell." 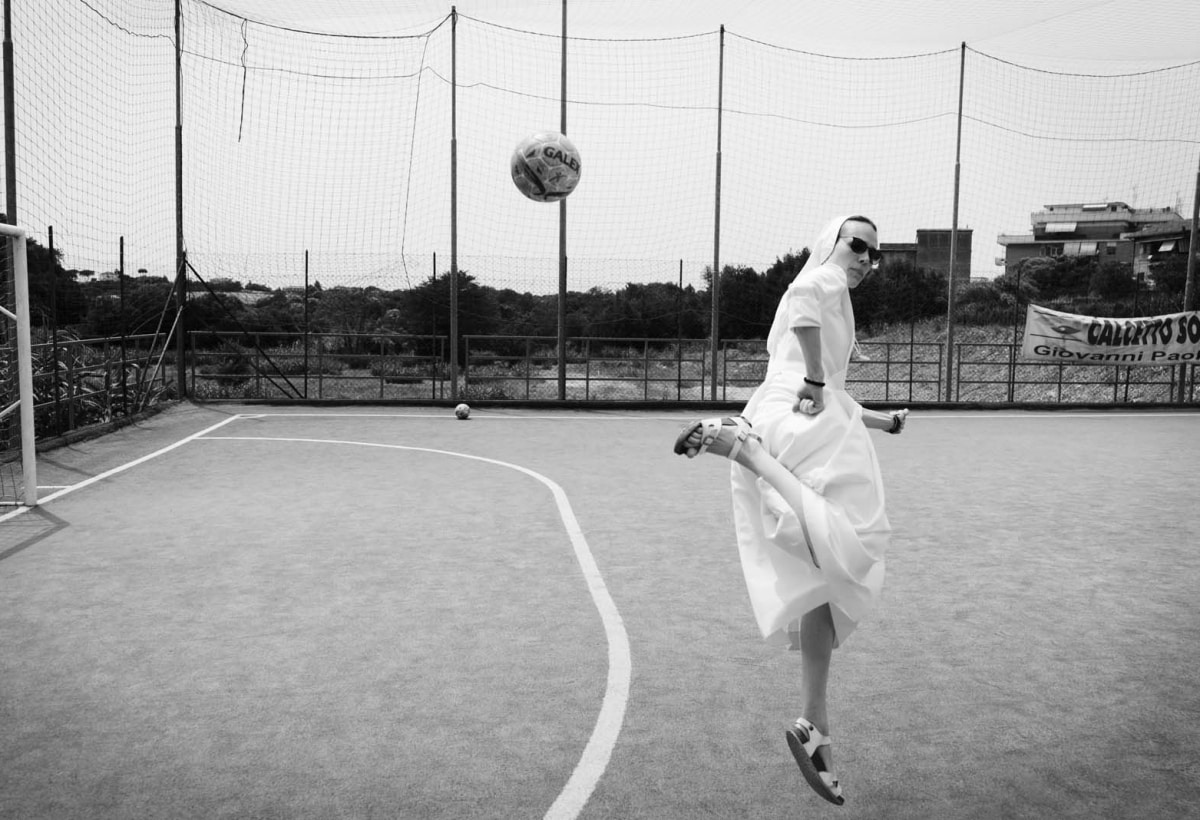 Renato Rappaini, general manager of Leica Camera Italia, further explains that "the desire to create a new, emotional and creative experience for those who do not know us or for those who have been visiting us for some time was the basis for the renovation of our flagship store in Milan. With Retail 2.0, Leica wants to modernize its spaces, reinterpreting the design and trying to approach present and future needs. Our stores represent Leica through unique and distinctive design and are places of encounter, directly, between our public and our world." Inside the Leica Store, Leica Galerie is presented with an expanded, modular and articulated environment, capable of hosting larger exhibitions, with a new lightdesign project to ensure better fruition and an immersive photographic experience free from distractions. 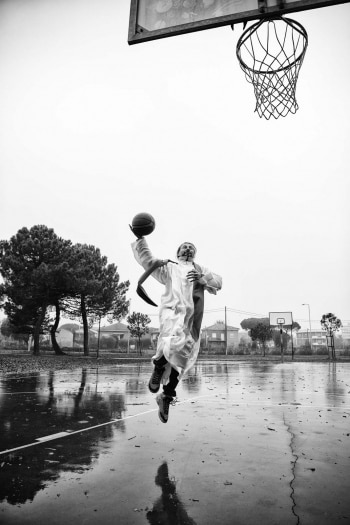 On the occasion of the exhibition, the illustrated catalog will be presented and it will be possible to purchase the photographs on display (limited edition of fine art prints, numbered edition, cataloged in a hall sheet with format and price).