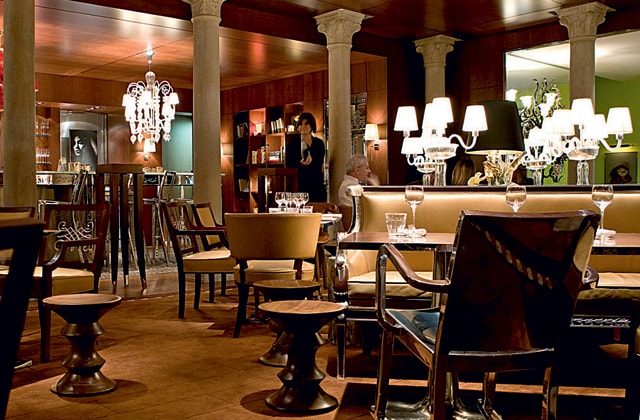 Palazzina Grassi in Venice (16 rooms and 6 suites, 5 stars), built next to Palazzo Grassi with a design by Philippe Starck, has been published in magazines around the world, because it is the first Italian hotel project by the French designer, and because in 2010 it played host, for over two months, to Johnny Depp while he was shooting The Tourist.

In little more than one year, the Palazzina (2800 m2), with its 4000 historic bricks, its mahogany panels, its works in glass by the Franco-Algerian Aristide Najean, its 286 backlit mirrors, has evolved to include the world’s second Krug Lounge (after the one in Sao Paulo, Brazil), a club open only to members. The more appetizing development is the PG’s Restaurant, run by the chef Luigi Frascella, who has invented an appealing combination of Venetian culinary tradition and oriental cooking techniques, in the wake of lengthy experience at Zuma in London and Tokyo. Luigi, 33 years old, from Apulia, trained under Adelio Donati, Gualtiero Marchesi and Giorgio Locatelli in London (where Damien Hirst, the planet’s most rich and famous contemporary artist, always hired him for private parties). For the Palazzina, where he arrived in August, he has made apt qualitative choices of food, opting for the produce of the island of Sant’Erasmo, prosciutto from Montagnana (PD), meat from the Treviso area, fish from Venice’s Giampaolo, at Campo Santa Margherita. Almost zero shipping, though he is not fond of that fashionable cliché. The fresh pasta, bread, bread sticks and pastries are made by an in-house staff of six persons.To define his culinary style, Luigi Frascella mentions several important points: natural, convivial, few elements on the plate, far from any idea of fusion. An inviting “luxury trattoria”, as the young owner of Palazzina Grassi, Emanuele Garosci, puts it, including personalized cooking lessons in which guests can accompany Luigi Frascella on his morning rounds of the outdoor markets, selecting the delicacies they will then enjoy at dinner that same evening. For reservations: tel. 041-5284644, www.palazzinagrassi.com.