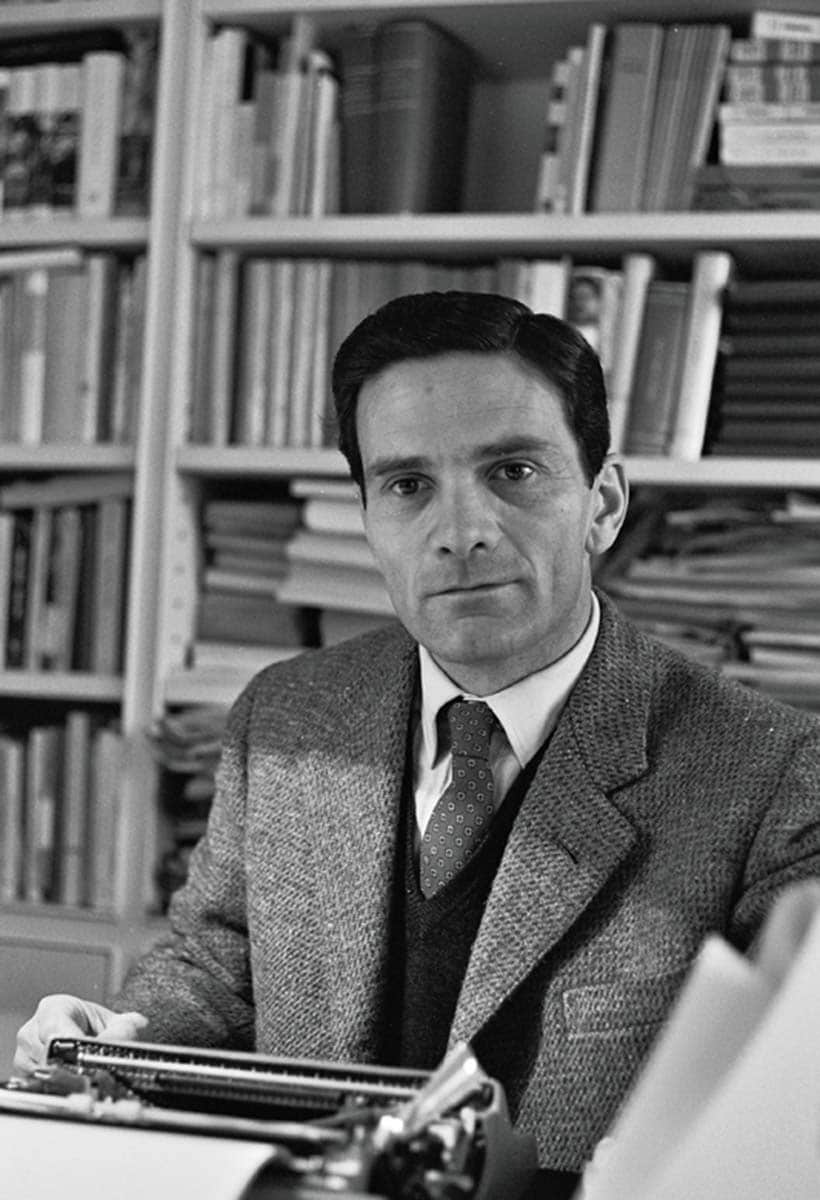 Pier Paolo Pasolini was probably the most photographed artist of the twentieth century. From the early 1950s, when he arrived in Rome, until the days before his death in November 1975, he was caught in hundreds of situations, both public and private, as if the photographic lens had chased him in every moment of the his life. The curiosity around the Pasolini man and artist has unleashed cameras all over the world.

In this exhibition (27 May / 2 October 2022) at Villa Manin di Passariano (Ud), in collaboration with the Centro Studi Pier Paolo Pasolini in Casarsa della Delizia (Pn), over 170 unpublished, rare, never seen portraits by Pier Paolo Pasolini (Bologna, 1922 - Rome, 1975): the exhibition brings to light entire photographic services, hitherto unknown, focusing above all on the great foreign photographers (Richard Avedon, Herbert List, Henri Cartier-Bresson, Jerry Bauer, Jonas Mekas, Lütfi Özkök, Erika Rabau, Duane Michals, Philippe Koudjina, Marli Shamir and many others) and on the places, moments and encounters that marked the life of the poet, restoring his image of man and artist in the world, fixed forever in dozens and dozens of different poses. Myths exist and speak for a long time, even when they are no longer there, even beyond their earthly life. Pasolini continues to talk, to tell stories through his portraits. Through photography. 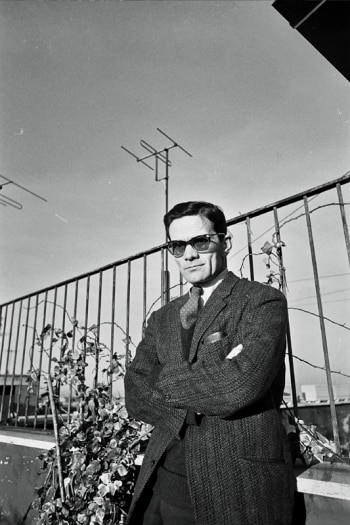 Pier Paolo Pasolini on the roof terrace of the house in Via Giacinto Carini 45, 1963, photo by Gideon Bachmann, © Archivio Cinemazero Images, Pordenone.

We asked Silvia Martín Gutiérrez, who took care of the scientific project and curatorship, to tell us about Pier Paolo Pasolini. Sotto gli occhi del mondo.

First of all, why this exhibition?

The project represents the first approach for the drafting of a broader study path, to testify aspects of history and also of aesthetics through the interpretations of great photographers and to build an archive of Pasolini's photographic memory with documentary value, a possible basis for future reinterpretations. Pasolini has been photographed many times throughout his artistic career, many of these shots have now become iconic images of the poet.

How important is it to know accurately the names of the photographers, as well as the date or context of these shots?

Showing these photographs deprived of the author's name, with the wrong information is a considerable responsibility: the responsibility of attributing to them without any permission a completely distorted image of his character and his history. Roland Barthes writes in the essay “La camera chiara” that the photo-portrait is a closed field of forces. Four images meet, confront each other and deform. "In front of the lens I am at the same time: what I believe I am, what I would like you to believe me to be, what the photographer believes I am, what he uses to show off his art". The portrait therefore, in some contexts and situations, is a very powerful semiotic tool of social recognition, usually cultivated as a form of consecration and social prestige. But photographic portraits are such a central and well-embedded aspect of contemporary visual culture that they often go unnoticed. But it must be remembered that the portrait provides the visual structure on which the narration of one's identity is built. 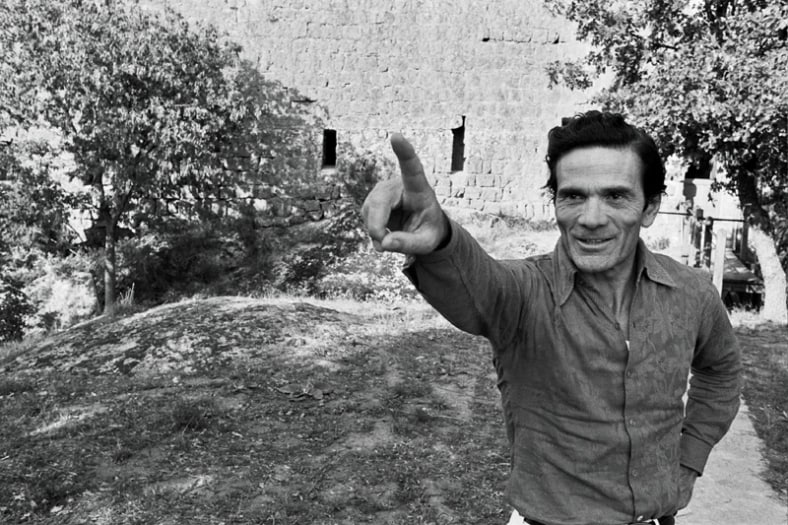 If we consider photography as a privileged basis for studying a subject, in the case under examination Pasolini, must we create a context that allows us to identify these Pasolini's portraits?

We need a framework of investigation in which to deepen various levels: historical, aesthetic and anthropological. Many foundations and archives we worked with in developing the project defined the particular situation of Pasolini's photographic portraits as foggy. And this responsibility is held by both the common person who creates or shares contents here and there with superficiality, and the institutional body that publishes these contents without first ascertaining whether or not there is a real, reliable source. It is therefore necessary to reconstruct the photographic path of Pasolini's portraits, in order to be able to establish a frame for future reference purposes. 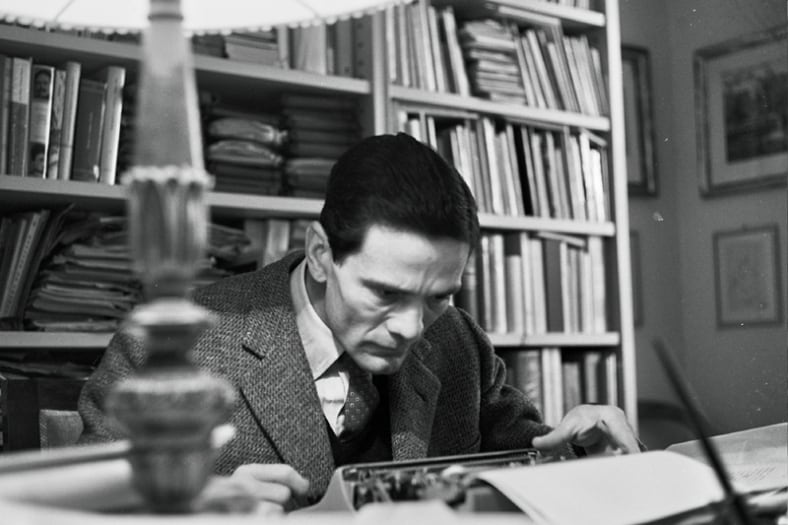 Pier Paolo Pasolini in his studio, in the house in Via Giacinto Carini 45, 1963, photo by Gideon Bachmann, © Archivio Cinemazero Images, Pordenone.

Pasolini had a suspicious relationship with photography. It is well known the affirmation of him "I do not let myself be moved by the photographs". In light of this, what spirit has guided the design of the exhibition?

Pasolini did not dedicate many of his writings to the analysis of photography, at least to an individualized analysis. We do not find significant insights. Except for a few words about the work with Delli Colli in 1971 on “Photo 13” or the paragraph dedicated to the photographic process of Warhol's “Ladies and Gentlemen” serigraphs in 1975, the reflections on photography linked to aesthetic aspects are always the most numerous. But let's go back to this statement taken from an article in the collection "Il Caos" of 13 December 1969, "Seriousness and fractions": "I do not let myself be moved by the photographs". Pasolini is looking at photographs of the workers' demonstration of that hot autumn of 1969 in the newspaper l'Unità. These autumn months were preceded, in 1968, by great trade union struggles. Metalworkers were leading an unprecedented movement. 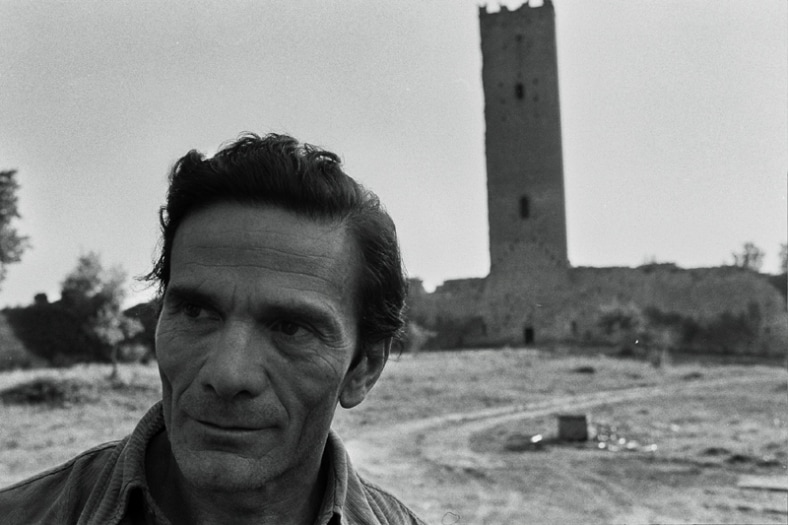 Why doesn't Pasolini allow himself to be moved by these photographs?

Later he says "these are things that only move in reality". Here Pasolini connects his analysis of him with that of Barthes on "La camera chiara" when he declares that he has nothing to say about the photos of a reportage on "urgent cases". Traumatic photography therefore finds its specificity in pure denotation. The French semiologist will say that through the processes of connotation, the category in which the language of advertising is found, that is, that of the press, the meanings that have the function of guiding perception are codified. For Pasolini, the photographs of the 1969 strike, which he looks at in the newspaper, exercise cultural control. To put it to Barthes "the more direct the trauma, the more difficult the connotation is". We cannot establish a link between Pasolini's sentence with his attitude towards photography as a means of artistic expression. This is the case of a completely distorted statement if we remove it from the context in which it was born. 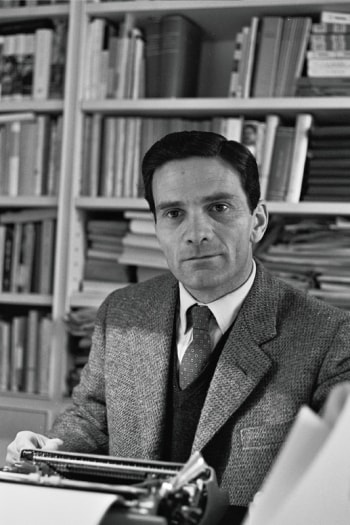 Pier Paolo Pasolini in his studio, in the house in Via Giacinto Carini 45, 1963, photo by Gideon Bachmann, © Archivio Cinemazero Images, Pordenone.

The Villa Manin exhibition aims to establish a dialogue between the gazes that meet in Pasolini's photographic portrait. Especially in the encounter between two realities that converge, that of the photographer and that of Pasolini.

I have chosen for this project the names of very different photographers both for the type of photography they made and for the specific moment in which they stared at the author. For example, we will have the opportunity to witness a conjunction of many gazes in a single moment, I speak of September 24, 1966. In Richard Avedon's studio different narratives meet, that of the New York photographer, another of the photojournalist Duilio Pallottelli, of course that of Pasolini and finally that of Oriana Fallaci. Can we approach the poet's images in New York without creating a story from all these different points of view and realities? 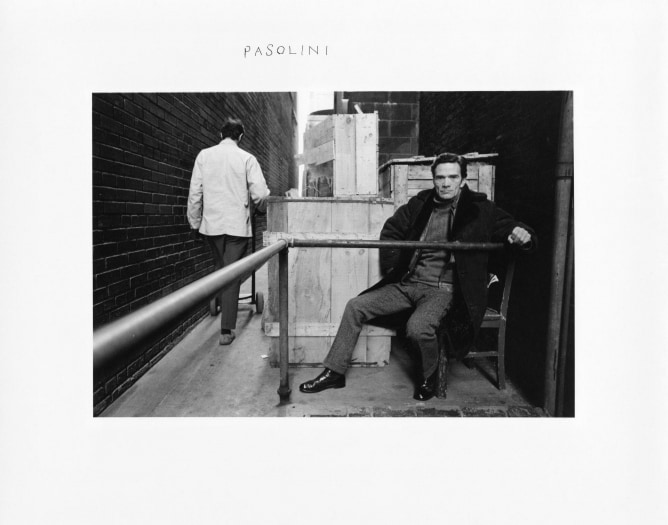 Pasolini underwent, exposed himself, but also hid himself through photography, the only expressive technique he never talked about except with very quick signs.

As I said before, Pasolini is an author photographed thousands of times, in every moment of his life from 1950 onwards. And the reportages, the photographic portraits increase from year to year, while he becomes an increasingly famous director. In every portrait Pasolini is recognizable, it is possible to say that Pasolini was truly “photogenic”. But at the same time Pasolini always looks different, he seems to escape the photographer's will to stare at him for those few seconds. Therefore the more he is photographed the more Pasolini becomes mysterious, he closes in on himself, moves away from the photographer's lens. On display will be some unpublished services in which Pasolini literally now seems to belong to an absolutely distant era. Even though he dresses like a trendy guy, he wears smart or sporty clothes. His body and his face are in front of us, but he looks far away. It is not true that photographs make human beings present even when they are no longer there. Maybe it's the other way around, they make them absent even from their present. In the case of Pasolini, the photographs made him like a Sphinx that looks at us and puts us in a position of inferiority. Or at least it forces us to ask ourselves questions.