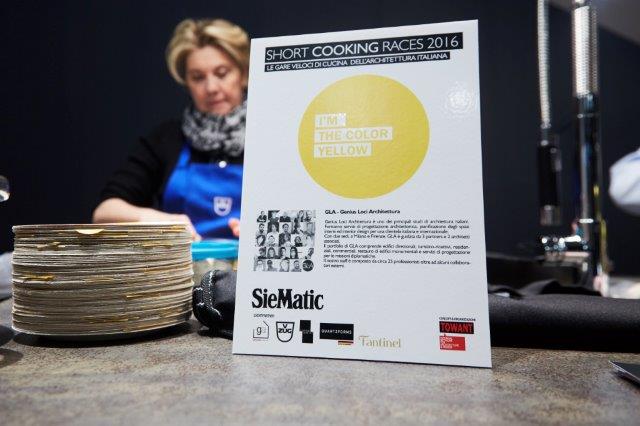 The winner of the Siematic  ShortCooking Races Edition 2016 was the studio GLA – Genius Loci Architettura, gaining a trip for two persons to Amsterdam offered by SieMatic, including a visit to the flagship store of the German kitchen manufacturer.

The second prize went to the studio Baldessari e Baldessari and consists of a trip to Zug and Basel offered by V-Zug.

The first Italian edition of the ShortCookingRaces began on 27 April 2016 in Milan, with a calendar of four appointments plus the final. The protagonists were some of the most interesting architecture firms in Milan, which faced off in true cooking speed contests, lasting just 30 minutes, preparing a single dish under the supervision of the chef Umberto Zanassi.

The audience at each race chose the best dish of the evening, allowing the studio to pass to the ShortCooking Races final.

The other participating firms were Fzi Interiors and Progetto Cmr.

The event included the presentation (and use) of quartz plates designed by the participating studios, made by Marmo Arredo.