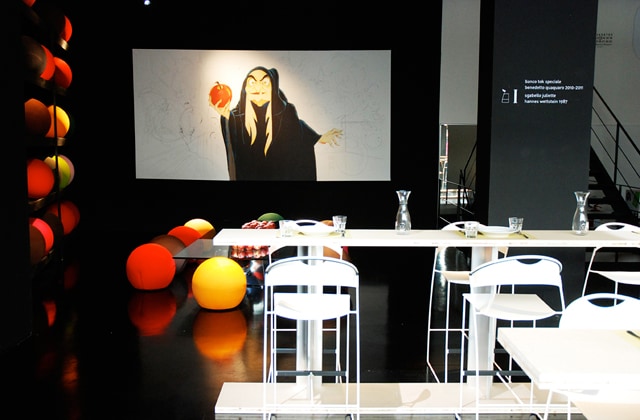 As the last act of the second edition of Milano Design Weekend, the event organized jointly by Gruppo Mondadoriand Gruppo RCS, a jury composed of Gilda Bojardi, Editor of Interni and GCasa, Silvia Robertazzi, Managing Editor of Casamica and ATCasaand the designer Fabio Novembreconvened to judge the showroom displays of the participants that offered the best interpretation of the theme of the event, ‘First-name basis. Dialogues between art and design’, transforming their retail spaces into emotional places, hosting unique things for a warm, engaging way of communicating with consumers. The jury then announced the winners for two categories, single-brand and multibrand. The winner of the single-brand section was Cerruti Baleri, “for the poetic interpretation of the theme, treated with irony and lightness”. Special mentions in the same category went to Molteniand Flos. Molteni: “for the stimulating approach to past, present and future, generated by the dialogue between great masters and new designers”. Flos: “for having magically staged the dialogue between art and design”. In the multibrand category the winner was Furlani for Pedrali, “an effective way of bringing out the relationship between art and design, through an immediately understandable language”. Prizes were also assigned to the manufacturers of cult products that received the most votes from the online audience: Luceplanfor the Zia illuminated table, Meritaliafor the Striptease chair, Scavolinifor the Happening Rainbow kitchen. www.milano-designweekend.it.