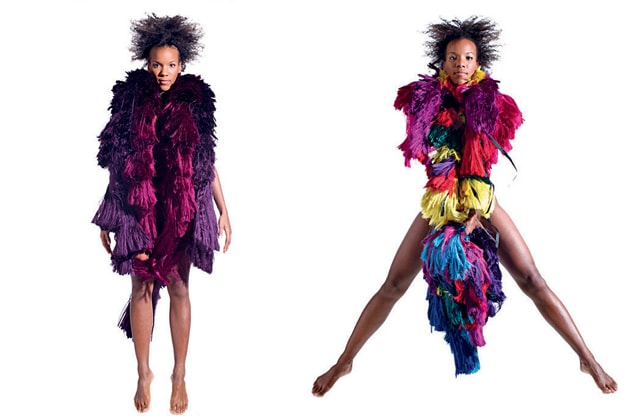 The design of the Retexo collection comes from a simple idea: to break down fabric and make garments with pure threads, without weaving.

Matteo Thiela uses millions of them to create dresses that trigger color explosions, like fireworks. He cuts the threads to different lengths to give form to varied volumes, accentuating the swirling movement. These are mutant dresses, sensitive to the movements of the body, that flutter in the wind, separate and rejoin in different forms. There will be a sequel as well: a winter collection made of wool yarns, for a completely different effect. Matteo is an unusual fashion designer. He started at the young age of 18: his mother had a classic dressmaking business, but he wanted to make something different. He watched the Japanese designers and decided to creating clothing like architecture. He dropped out of architecture school to focus on fashion. His first collection was shown at White, but he was already tired of the routine of commercial organization. After three seasons he dropped everything and went to live in the country. But he had caught the fashion bug. Now he is back, making new dreams, constructing 360° style visions without compromises, at a safe distance from the traditional fashion fray.

Klimahouse 2022 to build the future