A work between the organic and the inorganic

A work between the organic and the inorganic

In the architectural setting of a Roman cistern in Bergamo Alta, Spazio Volta proposes a new voluptuous and material installation which, from the liquid to the usual state, seems to spread and at the same time proliferate

In Bergamo Alta, in the former 14th-century fountain on which the former church of San Rocco now home to Spazio Volta, various immersive installations are taking place that interact with the space that hosts them, recalling the curiosity of the people who stop or pass through Piazza Mercato delle Scarpe, a picturesque place of passage and arrival of the funicular from the Lower Town.

Inaugurated with the evocative work in neon And then we went out to see the stars again, the artistic project of the Volta Association finds its identity in the tension between the subsoil of the 12th century Roman cistern and the large crescent-shaped glass window on the surface. Several artists are called by the curator Edoardo De Cobelli to give their personal interpretation. We tell you about the interventions of two young and inspired creatives.

Invited to exhibit in the architectural setting of the Roman cistern, the 'a Polish artist Mia Dudek moved on the thread between the organic and the inorganic, enveloping space with an immersive setting that, from the floor to the window, manages to give shape to the shapeless. The result was the work pervasive, voluptuous, proliferating Fillers , curated by Edoardo De Cobelli and Federico Castoldi, with a text by Orsola Vannucci Bonsi, inaugurated on 4 December 2021.

The materials seem to cling to the stone, its cracks and protrusions; they seem to follow a sensual and metaphorical dance as they change state: from the liquid, which spreads and penetrates, to the solid, which grows and occupies space. The space thus seems to convey both a domestic intimacy, as well as a ambiguous and inhospitable atmosphere.

Mia Dudek's works relate to the former fountain of San Rocco: they interact with its cracks, with its fractures, becoming themselves the growth that makes its memory resurface, in a fruit that invades its most hidden corners. The artist's works investigate the duly preserved memory, the perpetuation of history that re-emerges in the present.

The works arise from a series of processes, physical but above all internal, which manifest themselves through silicone and polyurethane foam, but also in rust, that of the tub positioned in the center of the tank and that of a 19th century tap. By creating an evocative environment inhabited by disturbing organic and inorganic presences, Mia Dudek thus succeeds in giving shape to the shapeless , which reveals itself on the cast iron and on the stone. 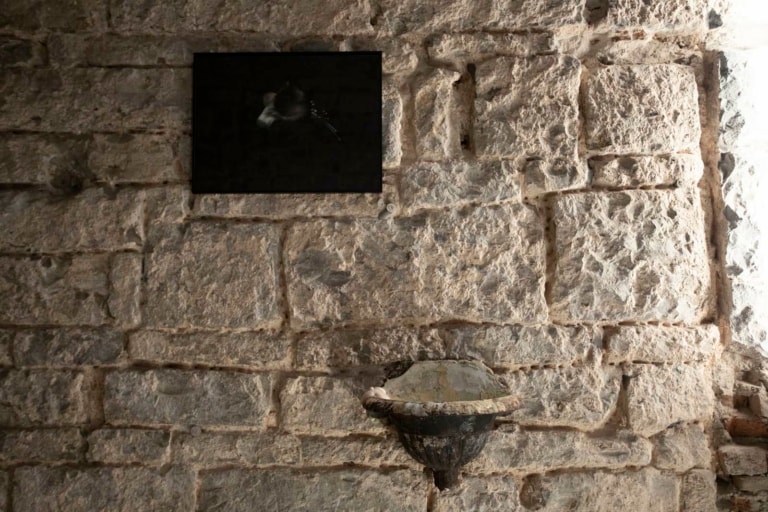 From 9 October to 11 November 2021 the large crescent-shaped window in Piazza Mercato delle Scarpe revealed an another installation - dreamlike and vibrant, rippled and 'crystalline' - in dialogue with the dark and cavernous spaces of the cistern. Like a sculptural breath stood out Sffsssshh by Giulia Poppi, edited by Edoardo De Cobelli, with a text by Gabriele Tosi.

A device that interacted with the natural light coming from the window, modulating and refracting it, Sffsssshh was a reconfiguration of an open sculptural project, which assumes forms different in the space that welcomes it. By welding small spheres of PETG, a granular plastic material, the artist created spirals that, depending on the light and the shape, looked like wavy ripples, clouds of crystals or organic lamellae.

From the ground to the walls, volutes appropriated space as if seeking more light, until, at dusk, the underground environment was illuminated and the play of light and colors generated by the rays continued, illuminating the work and the square with sparkles.

The sculptures performed space, not in space. They vibrated the light in a game of enchantments and references of ancient (and fresh) memory, recalling lace and macramé but also hypnotic shadows , the fairy-tale ones created by branches in the woods.

In Rome the archaeological remains light up with experimental art