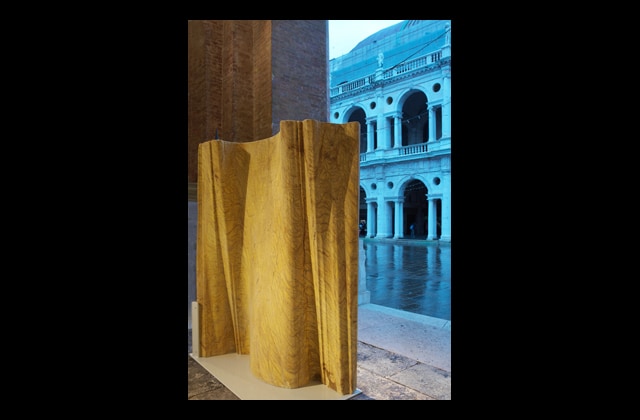 Three years after the first official presentation, Decormarmi, in collaboration with Ströehmann International, the German company operating in the stone sector, presents an exhibition featuring a collection of design objects in marble created by Raffaello Galiotto and produced by Decorarmi, together with companies that are members of the Consorzio Marmisti Chiampo. The show has moved beyond the Italian borders, first to Great Britain and then to Germany, showing objects that narrate and reinterpret in a modern way, though with echoes of classicism, the work of Andrea Palladio, the ‘global’ architect who has influenced architecture from Europe to the United States. By studying the lines of Palladio, in collaboration with the Centro Internazionale di Studi di Architettura Andrea Palladio, Galiotto has created a series of objects with a single leitmotiv: a geometric profile that recurs in Palladio’s works, a silhouette composed of a set of curves and ornamental parts, a large rounded curve and a conclusion, at the base, with other mouldings. The result is a series of furnishings in marble and granite, a challenge to technology and craftsmanship due to their perfection, the precision of the forms, the extreme angles, the games of light and shadow and the geometric design of solids and voids. www.decormarmi .com.