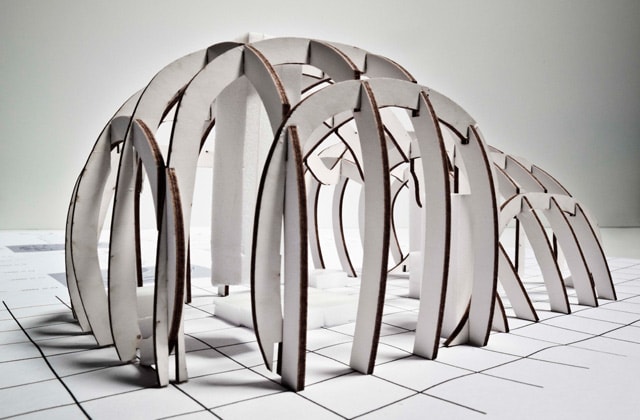 The announcement of the winning project marks the conclusion of the first phase of the architectural design workshop on fair spaces promoted by IUAV Venice and Colorcom. For two months 140 students of the Dept. of Architecture, guided by Raffaela Laezza, participated in a workshop to experiment with new architectural languages inspired by nature. Touch Fair Architecturerepresents one of the first concrete experiments of interaction between the academic world and that of business, especially in the area of architecture applied to trade fair stands. The project is both a seminar and an ideas competition. The winner was Stanojevich Djordje, “for ongoing experimentation, response to the specified themes and a great capacity to translate them on the levels of geometry, construction, composition and space, maintaining lucid control over the process of formalization.” Honorable mentions went to: 2nd prize Luca D’Agostin and Michael Strobelt;  3rd prize Matteo Girolimetto and Flavia Toniolo. The works of the students will be exhibited from 10 to 14 Sept at VicenzaoroChoice of the Vicenza Fair, and starting on 23 Sept at Riva, at the Garda Fair.