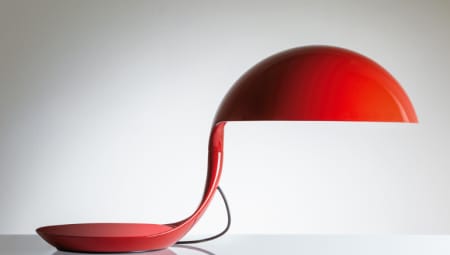 "To celebrate 50 years of Cobra, first of all I thought about a new color, red"

“To celebrate 50 years of Cobra, first of all I thought about a new color, red: bright, a symbol of fire, battle, force, light, with a strong personality. In the past, in the 1970s, Cobra was already offered in bright hues like yellow, orange and red. So this was almost a revival, to commemorate a product that is still in the catalogue and still very timely.”

This is how Emiliana Martinelli (Elio’s daughter, president of Martinelli Luce and the creative spirit of the brand) introduces the initiatives to celebrate an icon of Italian design, first produced in 1968: a futuristic table lamp, originally created in the black and white versions, so ahead of its time that it was disruptive, and still contemporary enough to find its way into international films, just as in the past.

With its perfect balance of innovative design and formal rigor, Cobra is formed by two molded volumes in heat-curing resin: the lower part rotates on the steel base, and is connected to the upper part by a central joint to permit 360° rotation. An object enclosed in a sphere, where the rotating movement of the reflector around the central pivot makes it possible to change the appearance.

Getting back to the anniversary, Emiliana Martinelli wanted to pay homage to her father Elio by inviting a series of designers who work with the company, along with some friends – including Luisa Bocchietto, Michel Boucquillon, Alessandro Guerriero, Alessandro Mendini, Angelo Micheli, Paola Navone, Karim Rashid, Marc Sadler, Brian Sironi and Emiliana herself – to rethink the Cobra through a graphic texture created for application to the lamp.

Each project-texture comes in 30 signed and numbered pieces, plus three trials. These signature reinterpretations will be seen in an exhibition opening on 27 January at the Milan Triennale, also presenting the red version. (Andrea Pirruccio)