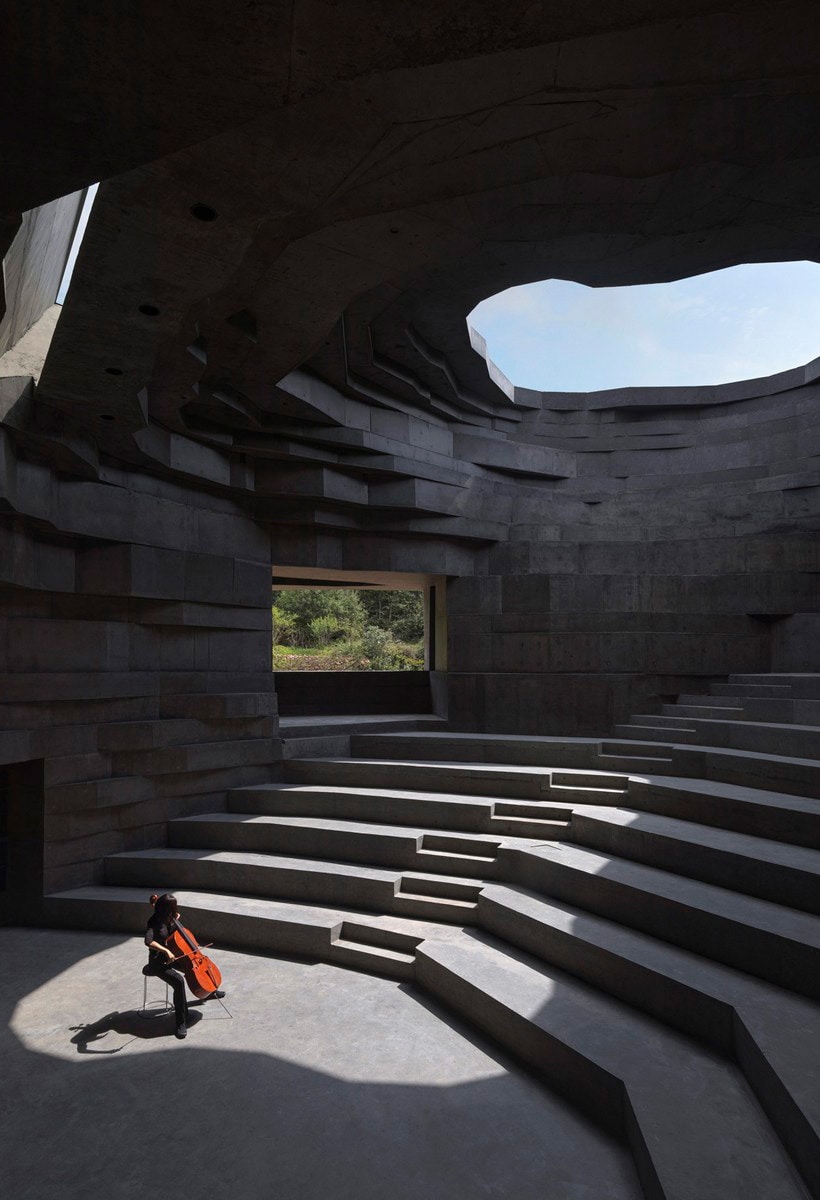 Monolithic, mimetic and primordial, Chapel of Sound is a sort of layered cave that becomes a natural sounding board for listening to concerts but also for enjoying the – symphonic – frequencies of the landscape

Like a mysterious cave, inside which sounds reverberate and bounce from wall to wall until they flow out of the excavated openings and the large skylight on the ceiling, Chapel of Sound is ancestral place with otherworldly references, like a monolith lying on the ground, dedicated to music and its stimulating and soothing properties, but also to simple contemplation , to harmonize with the surrounding nature, and with themselves.

In Chengde, Hebei, north of Beijing, camouflaged among the reliefs that for centuries have housed the remains of the Great Wall of the Ming dynasty, the studio Open Architecture modeled a stratified, sensory and ascetic architecture to give shape to the sound , the one that originated from musical instruments and the less perceptible but strongly pervasive one of uncontaminated nature. 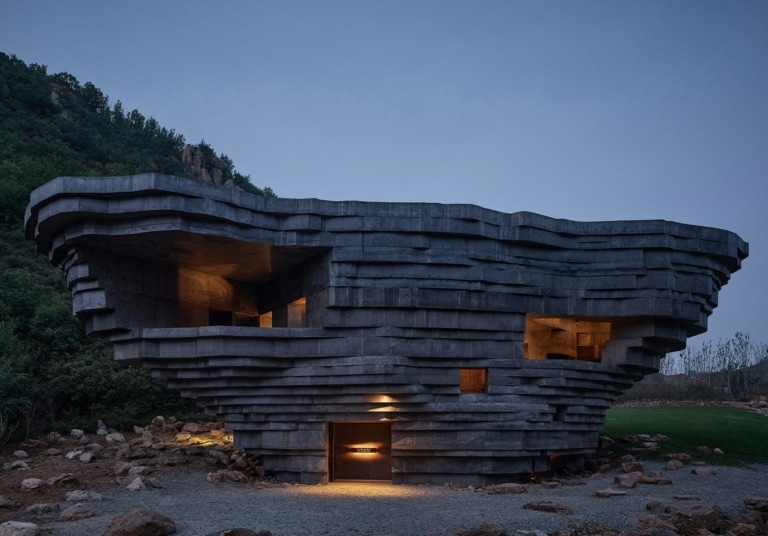 A concert hall rests on the valley floor as if it were a mysterious prehistoric boulder which, having fallen many geological eras ago, has settled on the ground becoming part of it. Made entirely of cement enriched with an aggregate of local rocks rich in minerals crushed and with only bronze details to embellish the details, the structure of Chapel of Sound, monolithic and at the same time cantilevered, with a inverted cone shape, houses a amphitheater semi-open, a outdoor stage and a observation deck panoramic on the roof connected by winding spiral staircases, as well as other supporting spaces.

Read also: Kengo Kuma: without rhythm an architecture does not create emotions 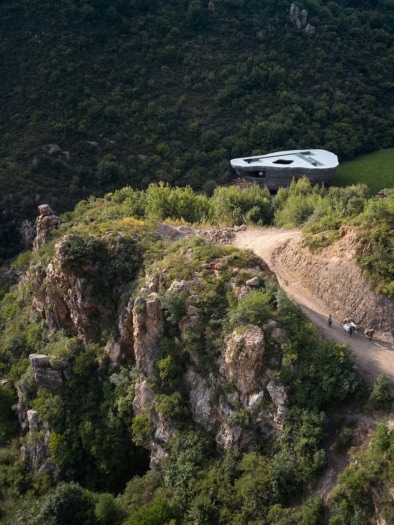 Although designed to give back the ' deeply moving experience of music performed in the cradle of nature , architects Li Hu and Huang Wenjing, founders of the Open studio, thought of an organic sedimented architecture that was also a place of peace and introspection: an invitation to listen to the sound of nature. When there are no indoor concerts or outdoor sound events, the room becomes a space of amniotic quiet, to immerse yourself in the landscape listening to the natural noises that creep into the chapel to amplify themselves. Whether it's the chirping of birds, the rustle of light breezes or raindrops tinkling on rough stones, nature orchestrates an ever-changing symphony. 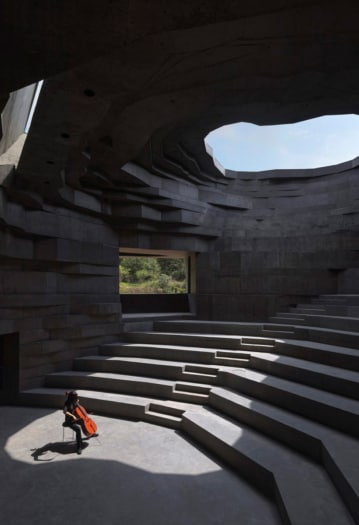 Working closely with acoustic engineers , the Open studio has studied the different ways in which people experience sound to define, in a simple but precise way, the openings of the chapel, making sure that they function both from areas of acoustic absorption and from connection with the ' external environment. The excellent acoustic quality of the concert hall was therefore obtained without the use of additional sound-absorbing materials. 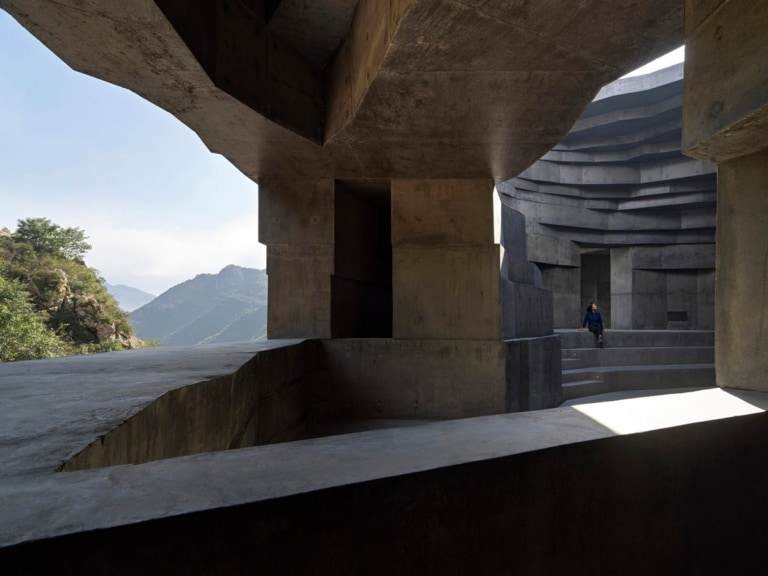 Without heating or air conditioning systems, Chapel of Sound consumes a minimum energy. The openings on the walls and roof allow light and other natural elements to enter, naturally illuminating the spaces and sound performances; for when it rains, an ad hoc rapid drainage system has been devised. Furthermore, the architects wanted to minimize also the footprint and the ' impact dell ' building in the pristine valley. In dialogue with the landscape, the rock-like structure composed of an internal and external shell with the intermediate space acting as a truss, was built in collaboration with the engineering firm Arup. 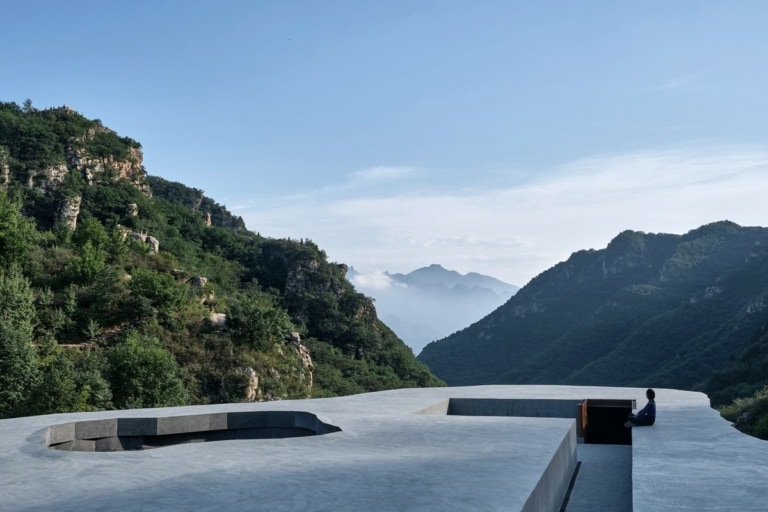 A sedimented architecture for natural and musical sounds

The peculiar layered and cantilevered shape of the ’ building is inspired by the sedimentary rock formations of the surrounding mountains. Against the background of a rough space similar to a cave in which to take refuge, design elements and details stand out carefully designed to offer welcoming and silent comfort: an invitation to rest body and mind surrounded by both musical and natural sounds. 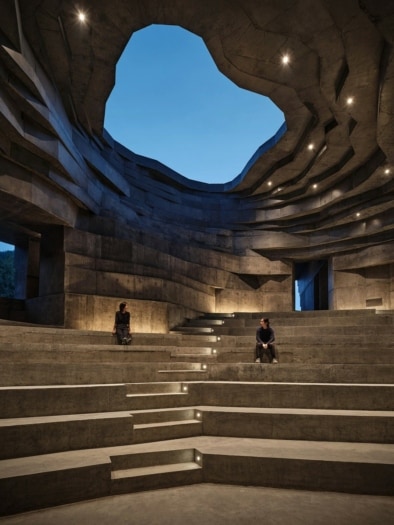 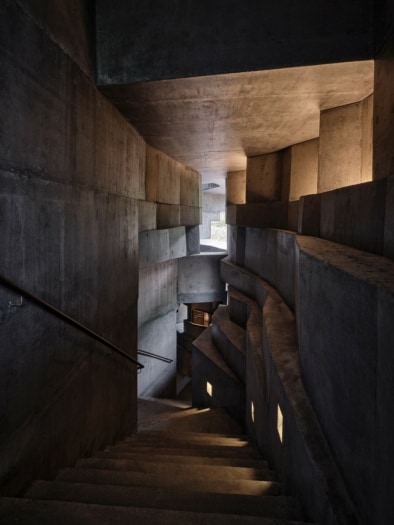 Pininfarina's masterplan for a new city in China

The Swedish restaurant housed in a glass house