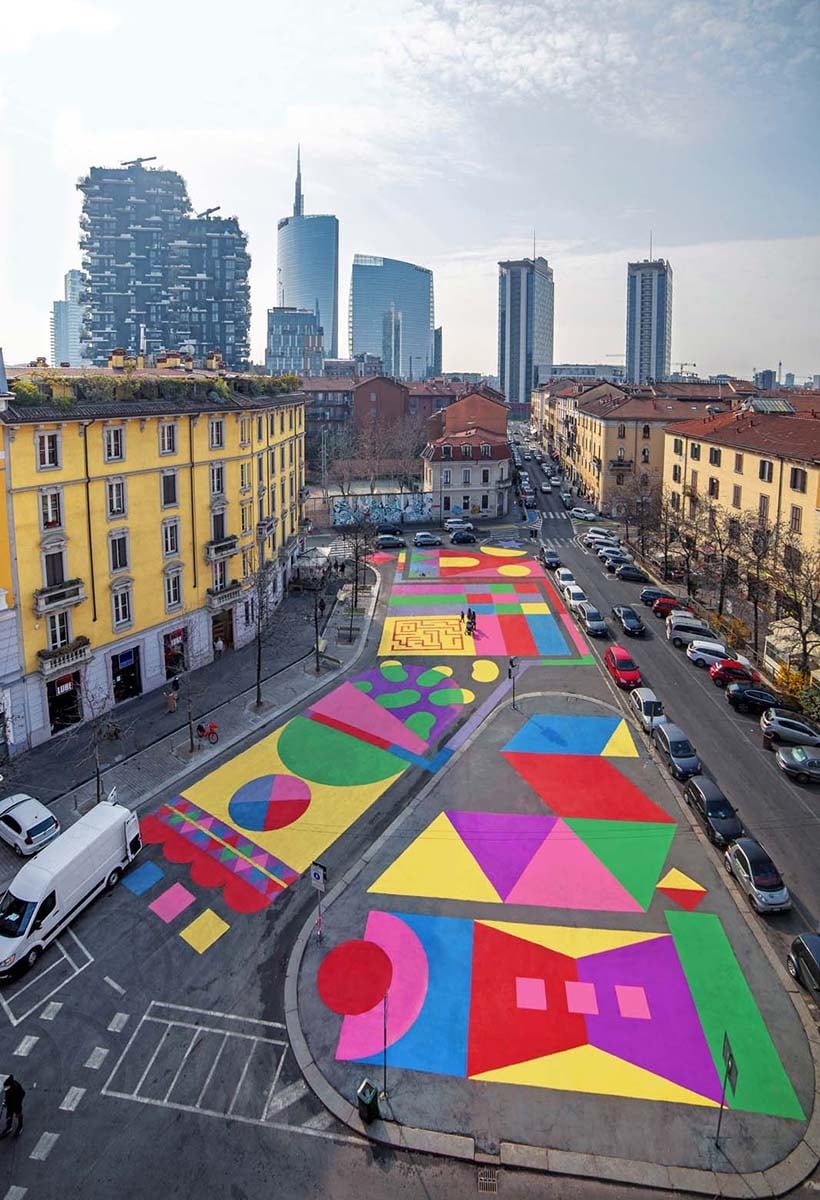 Tactical Urbanism to bring people back to squares, Rediscovering public spaces as gathering places. The Piazze Aperte project of the city of Milan uses asphalt art to improve the city also in terms of circulation, involving designers and artists like Serena Confalonieri and Camilla Falsini

Colored maps and chromatic interventions to improve post-pandemic cities. we hear talk of ‘soft urbanism’ or ‘tactical urbanism’ to revive public space, with limited resources and low investments. the initiatives start from the ground up, in grassroots movements of neighborhood associations, with the participation of local residents. street art projects to revitalize territories in a state of decay do not represent a new idea, but the large network of international cities involved in the “Asphalt Art Initiative” is impressive. it has been organized since 2018 by Bloomberg Associates, National Association of City Transportation Officials (NACTO) and the Global Designing Cities Initiative. the cities involved include New York, Seattle, Oakland and Pittsburgh, in the United States, and european cities like athens, london and Milan. 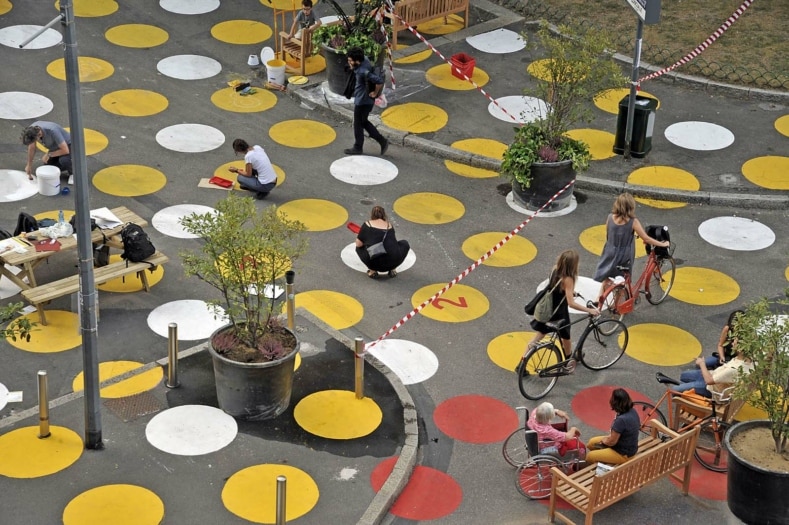 Graphic effects at Piazza Dergano in Milan, with the participation of local residents.

Piazze aperte is the Milanese interpretation of the Asphalt Art Initiative, within the local Plan for Suburban Areas, and it applies the tactical urbanism approach to restore the central role of public spaces in neighborhoods. The idea is to directly involve people in processes of urban regeneration, with short-term, low-cost and scalable policies. The first experiments date back to the end of 2018, with the projects for Piazza Angilberto II and Piazza Dergano, where ping pong tables also appeared, to encourage different activities and multigenerational use of public space. Next came interventions at Piazza Gasparri, Porta Genova and Spoleto-Venini in 2019. Piazze Aperte has met with eager interest on the part of neighborhood associations, and in 2020 as many as 65 renewal projects were submitted. The municipal government continues to work to identify new areas of intervention, in order to transform squares from parking lots or simple points of transit into accessible spaces with safe intersections, boosting pedestrian use and local commerce without having a negative impact on traffic circulation as a whole. 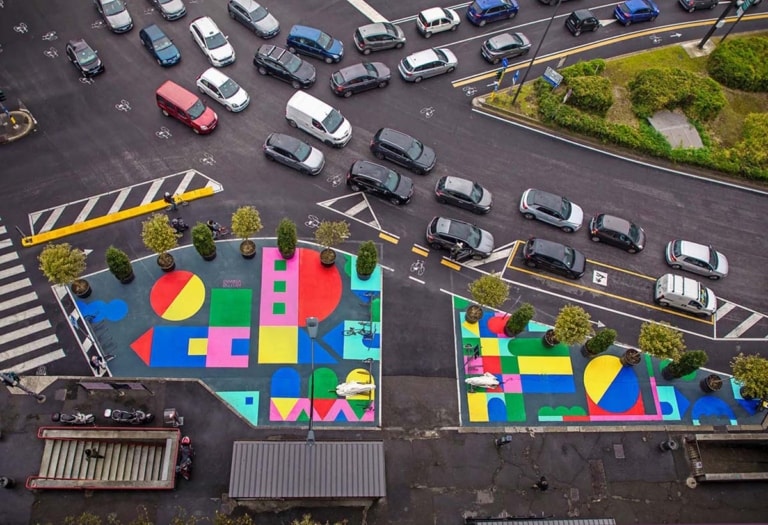 Renewal of a portion of Piazzale Loreto, with graphics by Camilla Falsini.

Designers and artists have been involved in the Piazze Aperte program of late. First, the Roman painter and illustrator Camilla Falsini, contacted by the Milanese agency Jungle to handle the creative aspects of the renewal of Piazza Minniti, in the Isola district, and of Piazzale Loreto. In the first case Falsini has created a graphic design with enormous letters, which can only be read at second glance, forming the word ISOLA. The forms take their cue from the specificities of the neighborhood: the letter L, for example, is a skyscraper, a tribute to the most contemporary aspect of the zone. The letter is composed of a set of lines that overlap to create a weave of colors, a reminder of the quarter’s character as a social melting pot. Then there are the figures of a house and a stylized island, linking back to nature and greenery. At Piazzale Loreto the project is smaller, but based on the same concept: the word LORETO is hidden in the image, blending with references to the forms of houses and buildings. The graphic design was done with the participation of neighborhood associations. Street art can have a major impact on the renewal of public space. 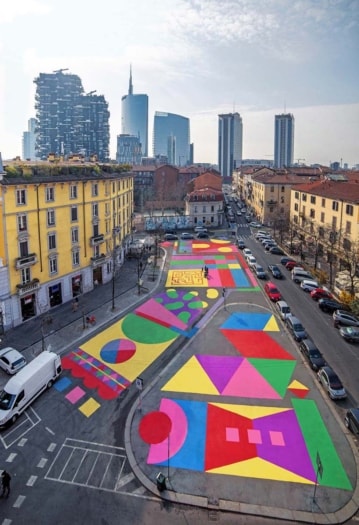 Piazza Minniti, previously used as a parking area and now a pedestrian zone. Camilla Falsini has created abstract and geometric graphics that reference several morphological features of the zone, such as the new skyscrapers. Looking closely, one can see that the graphics form the word Isola, the name of the district. Project developed in collaboration with the agency Jungle.

“I think it can have an influence on two levels,” Falsini explains. “One is more practical, the other a matter of aesthetics. On a practical level, these are projects that are accompanied by the creation of pedestrian areas. If these zones are emphasized on a visual level, with strong colors, the difference with respect to other zones of the city, like busy high-traffic streets, becomes even more perceptible, and local residents are more likely to use the space. Seeing the enhancement of the neighborhood, people have the desire to make it come alive, also in social and cultural terms. Public art, precisely by its nature, is seen as a shared legacy – and rightly so – which triggers a sort of mechanism in which citizens feel involved in the care of communal spaces. Obviously it is not always simple, especially in the most problematic districts. Nevertheless, street art is going through a golden era, with investments on the part of institutions, governments, private patrons and companies. We should avoid the banal interpretation, however, of street art as a way to eliminate the structural and social problems of cities.” Falsini will soon be involved in the creation of a large mural in Milan.

The former parking area of Via Val Lagarina in Quarto Oggiaro has been converted into a new public space, thanks to graphics by Serena Confalonieri. The grid has a central module of four meters, for the passage of emergency vehicles, two-meter modules with green spaces and a playground, and smaller one-meter modules to suggest social distancing.

The Milanese designer Serena Gonfalonieri, on the other hand, has contributed Quadra, a graphic art installation in the former parking facility of Via Val Lagarina in Quarto Oggiaro, on the outskirts of Milan. Again, the project has been carried out with the inhabitants of the neighborhood: the volunteers of the association WAU! Milano and the students of the Istituto Scolastico I.C.S. Via Val Lagarina. The plaza of 600 square meters has been subdivided by a sort of grille, similar to notebooks with graph-paper pages – hence the name (which means ‘square’) – generating a variegated place of recreation and gathering. The grid has been decorated by starting with primary colors and basic geometric patterns. It contains green areas with new trees and sidewalk games like checkers, twister and hopscotch, an educational garden and bicycle racks. The project had a series of constraints: among the various difficulties, it had to be simple enough to allow volunteers to contribute, tracing the lines or coloring the designs with a limited number of hues. 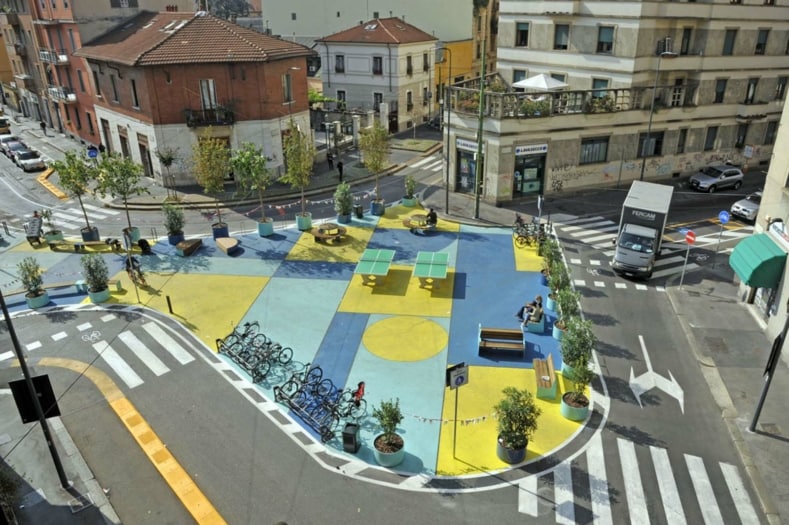 The new graphic square of Spoleto-Venini.

“Recently,” Confalonieri says, “a work of street art was inserted near my home, on Via Pacini, and the results were truly surprising. I was enthusiastic, so I contacted the municipal government and offered my services for future projects.” The outcome is this new piazza at Via Val Lagarina. In general, what is the potential of street art to regenerate public space? “To have a real impact,” Confalonieri continues, “I think it is fundamental for the graphic design to take the requests and needs of people into account, the people who will use the area. The aesthetic aspect is very important, but to create a gathering place you have to insert elements that stimulate interaction with the site, such as the games seen here, or educational vegetable gardens. Local inhabitants have to be involved, so they can think about public spaces as belonging to them, places they can use and care for.” 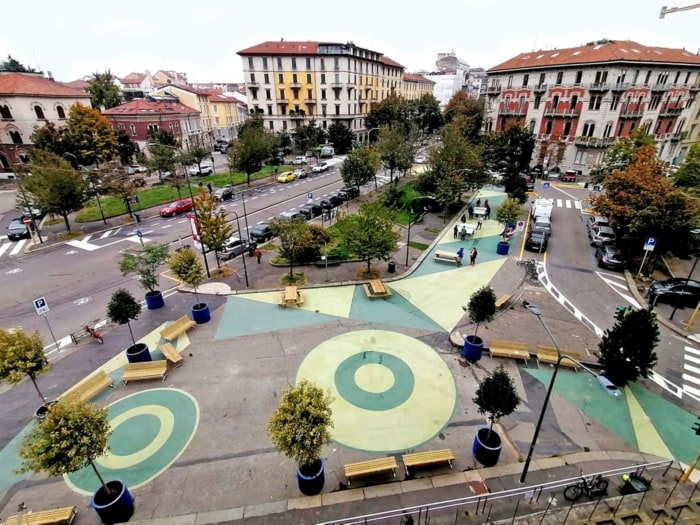