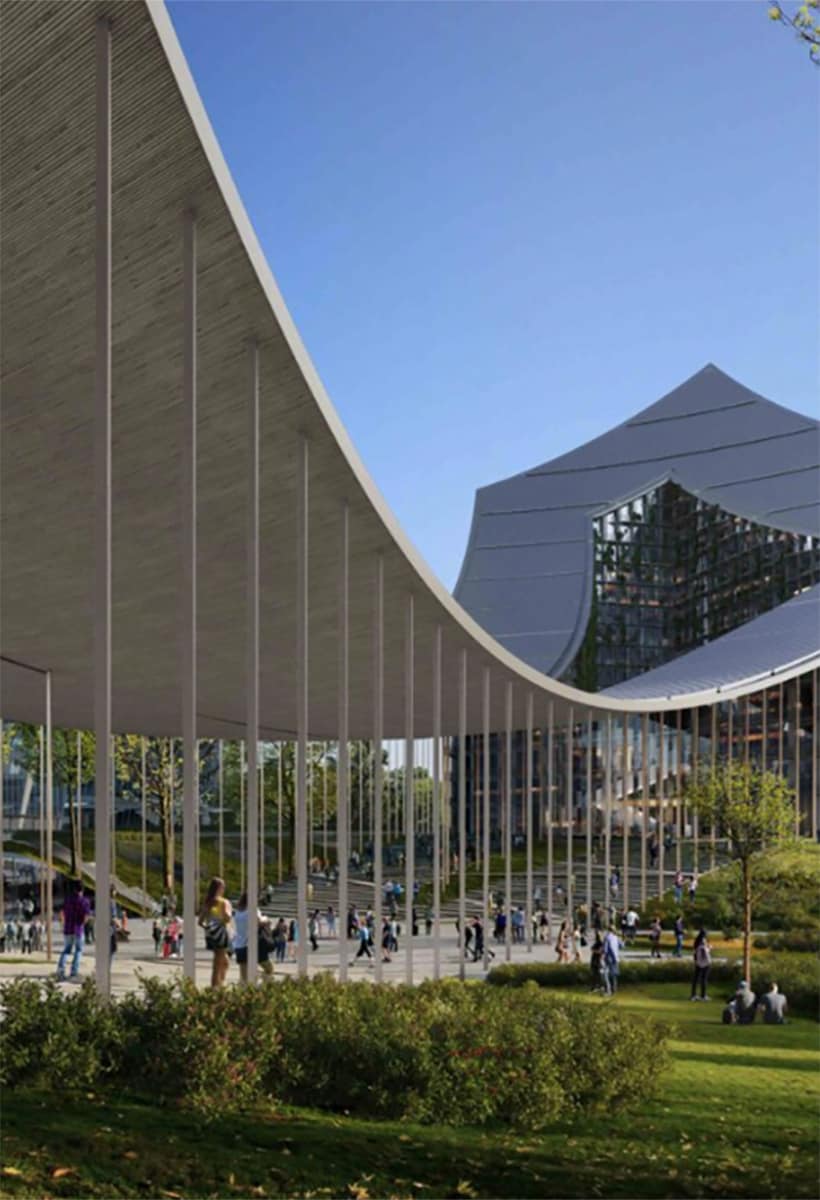 The architectural buildings that will be completed in 2023 are numerous and bear the signature of some of the most important international design studios. From Milan to Bolzano, here are the architectures not to be missed in 2023 in Italy

The architectures not to be missed in 2023 respond, one could say, to a single important trend, or rather, maxi-container, which unites all the architectural buildings that will come to Italy this year: the design of places and structures that know how to respond to the renewed desire for community.

A type of approach to architecture that promises not to stop at aesthetics and technicalities, but which intervenes to contribute, improve and implement the habits of life aimed at the community of citizens from all over the world. Starting from the intense relationship established with nature, which returns with each project.

From the most awaited and typically urban appointments - such as the completion of the Unipol Group Headquarters in Milan, by the Mario Cucinella Architects studio -, to architectural structures of a completely different character immersed in green landscapes, such as the pediatric hospice designed in Bologna by Renzo Piano Building Workshop - the dates and addresses to be noted in 2023 they are multiple.

We have collected 7 architectures to inaugurate in 2023, in a primordial list that we will carefully update with further news over the next few months.

The Factory of the Future of San Pellegrino Terme, BIG Architects

It is a rather awaited appointment (the start of the works is dated 2019 and the first project proposal 2016), as it promises to be a structure capable of telling the story and the heritage of the company, with a decidedly architectural profile intriguing.

First of all, because it promises to integrate perfectly with the landscape and the stylistic tradition of the Val Brembana, without renouncing a contemporary and immersive mood. And then, because the anticipations tell of evocative curves of the gentle ups and downs of the mountains and bridges in the area. The Fabbrica del Futuro was also born from the desire to establish a virtuous bond with local communities. 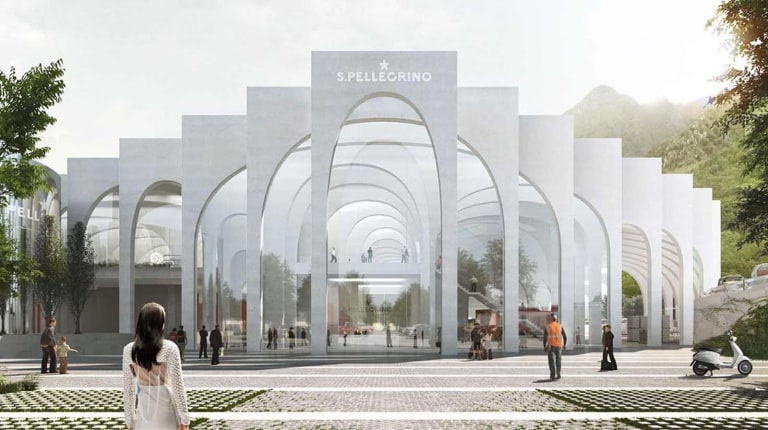 It is the most recent new entry in the Porta Nuova district in Milan. During the pandemic, the first hints of a structural skeleton appeared and it will be completed in 2023: it is the new headquarters of the Unipol Group, a 124m elliptical building with a bioclimatic design capable of insulating the building in winter and limiting its overheating in summer, signed by Mario Cucinella Architects.

The idea behind the Unipol Tower in Milan is to create an intimate connection between the people who live there, the activities that take place inside, and the surrounding environment.

The double skin of the facade represents the element that transforms the building into an organism in continuous exchange with the outside, a weave of ordered branches that interact through light and air. This is why it has been called sensory architecture. 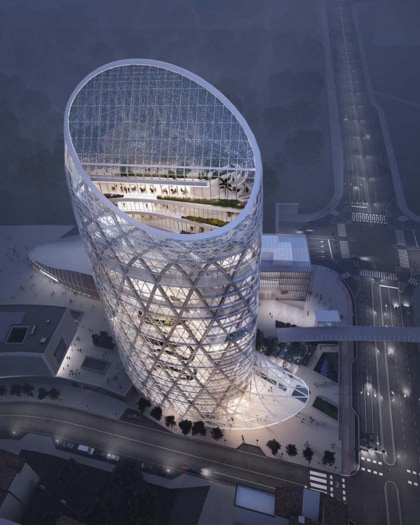 Within a more structured design plan made up of different architectural complexes created for Mutti, the studio of Carlo Ratti together with Italo Rota will present the Mutti Canteen towards the end of the year.

A building immersed in the Parma countryside, which, once again, fits in total harmony with the surrounding area: seen from above, the structure looks like a puzzle piece (in this case, the green all around), slightly off the ground. This optical effect was strongly desired by the architects who explain that they started from the most primordial of conceptions: to give the building the simple appearance of a piece of lawn cut out and re-positioned in the original place, only slightly above. Below, as if protected by greenery, the canteen.

The project is inspired by the local agricultural tradition, with which Mutti has established a strong bond throughout its history. Hence, the desire to give employees but also visiting external customers a place to enjoy genuine meals, in close contact with nature and the local area. 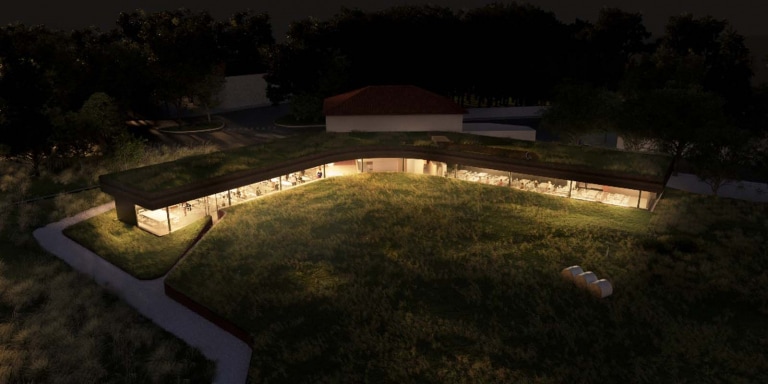 Mario Cucinella Architects is also working on a second Milanese project: the second life of the immense MIND space, which we first met on the occasion of Expo2015.

The universal exposition of a few years ago will be revived in the redevelopment project, by means of the main axial lines Cardo and Decumano already recovered then, which in this case will represent the backbone and legacy of the new innovation laboratory urban.

The new MIND will be organized into numerous sub-spaces ready to populate the entire new district. The urban layout, developed in collaboration with LAND, will rest on the backbone of the Decumanus and will develop in an alternation of light lines and thicker lines that represent the new axes and new urban areas. The rhythmicity that will be established will be completed by the system of parks, which put the presence of a pervasive nature at the forefront.

There will also be water elements in the perimeter, creeping between the lines thus creating a harmonious contrast with the built part. 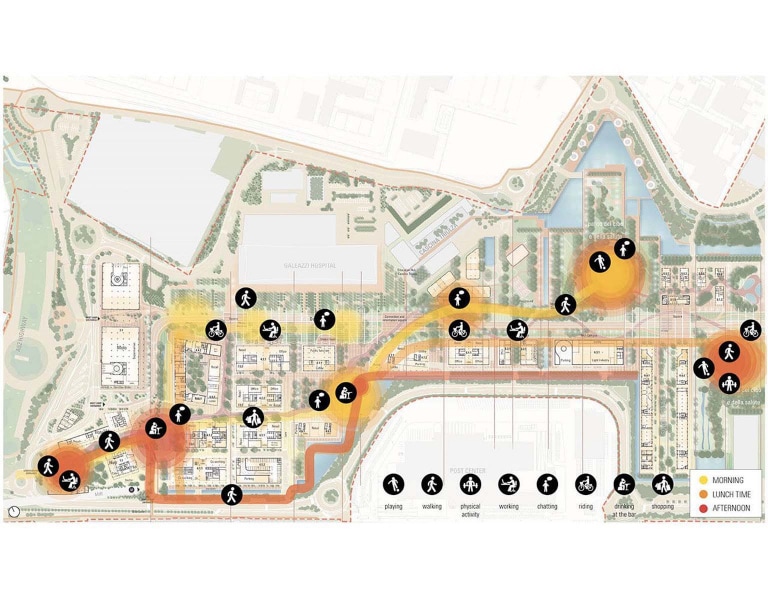 Lightness and relief are the starting and finishing points of the entire project, which already starting from its structural lines (the building is raised off the ground and rests on slender columns with a circular section) proposes as a place that combines function with the dimension of visual pleasure.

The project was commissioned to the Renzo Piano Workshop Building by the Maria Teresa Chiantore Seràgnoli Onlus Hospice Foundation, in Bologna, to embody the approach that has always been adopted towards palliative care .

The maxi tree house really wants to evoke the light and playful dimension that should characterize childhood moments: the numerous pavilions are interconnected and connected with a main block that acts as a nucleus. In all, there are eight apartments dedicated to the families of young patients, then there are also two poles dedicated to more intimate dimensions: a space for meditation and a terrace surrounded by greenery. 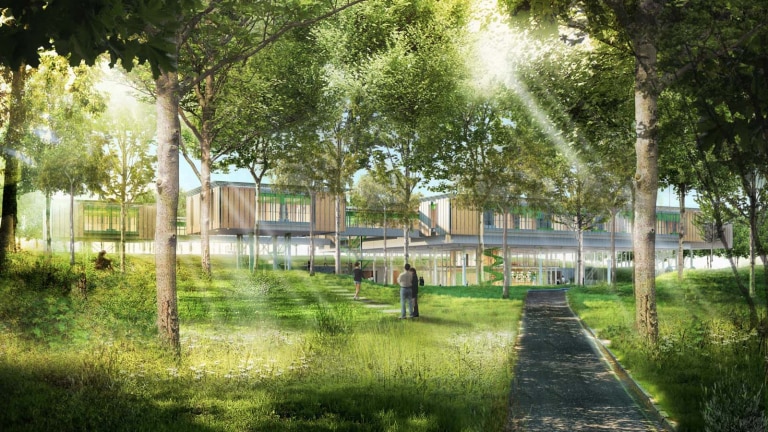 A sports hall with an unusual face, a space dedicated to sports activities, as well as the new reference venue for the members of the Schützen associations and the local football team.

Fieldhouse, in Bressanone, is nestled in the mountains and directly overlooks the playing field. The structure was designed by the MoDusArchitects studio as a real nest, complete with pitchside services.

The minimalist appearance conceals a complex system of ramps designed to deal effectively and functionally with uneven ground, which transforms into stands populated by fans during matches. The structure is completely developed horizontally and, complete with a covered terrace and cafeteria, lends itself to being not only a football venue but also a meeting place for the local community. 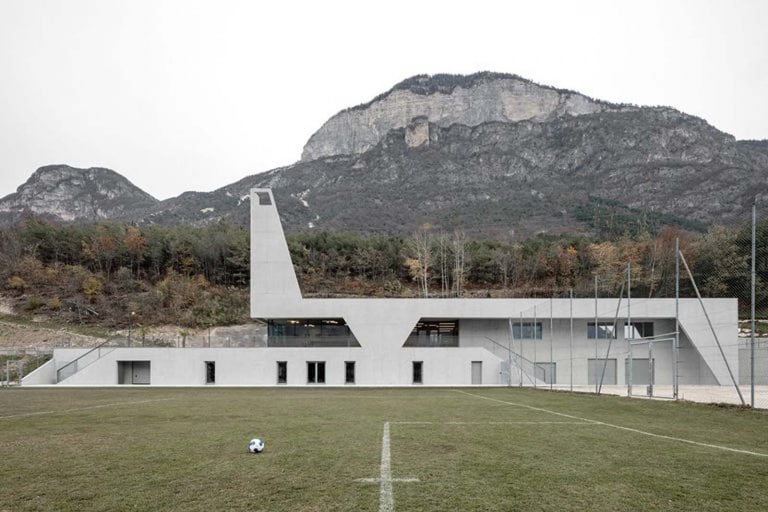 The completion of the district known for the skyscrapers that enliven the former space of the Fiera Campionaria in Milan seems to be scheduled for 2025. In the meantime, during this year, which has just begun, we can observe the continuous evolution of the area characterized by a dual soul: the residential one and the professional one, the modern and the traditional one, able to blend perfectly and with charm.

To the already present architectures of Piazza Tre Torri, which as the name suggests welcomes Allianz Tower, Generali Tower and PwC Tower (the straight, the crooked and the curved, as they are also called) respectively designed by Arata Isozaki with Andrea Maffei the first, Zaha Hadid the second and Daniel Libeskind the third, a fourth building will soon be added, which will act as a frame and a bit of a complementary piece to the current panorama.

The new entry designed to also house the post offices will be called City Wave and, with the appearance of a soft wave capable of embracing the view, will bear the signature of the Danish studio Bjarke Ingels Group (BIG).

It promises to have a great impact, in the meantime, we just have to observe the progress of the works. And even those, have a certain charm. 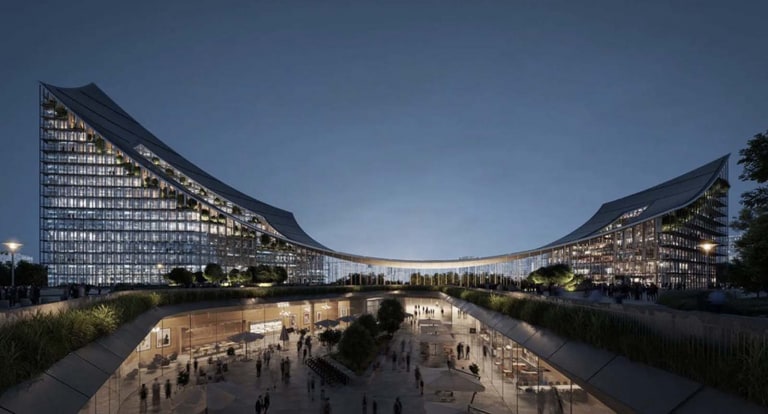