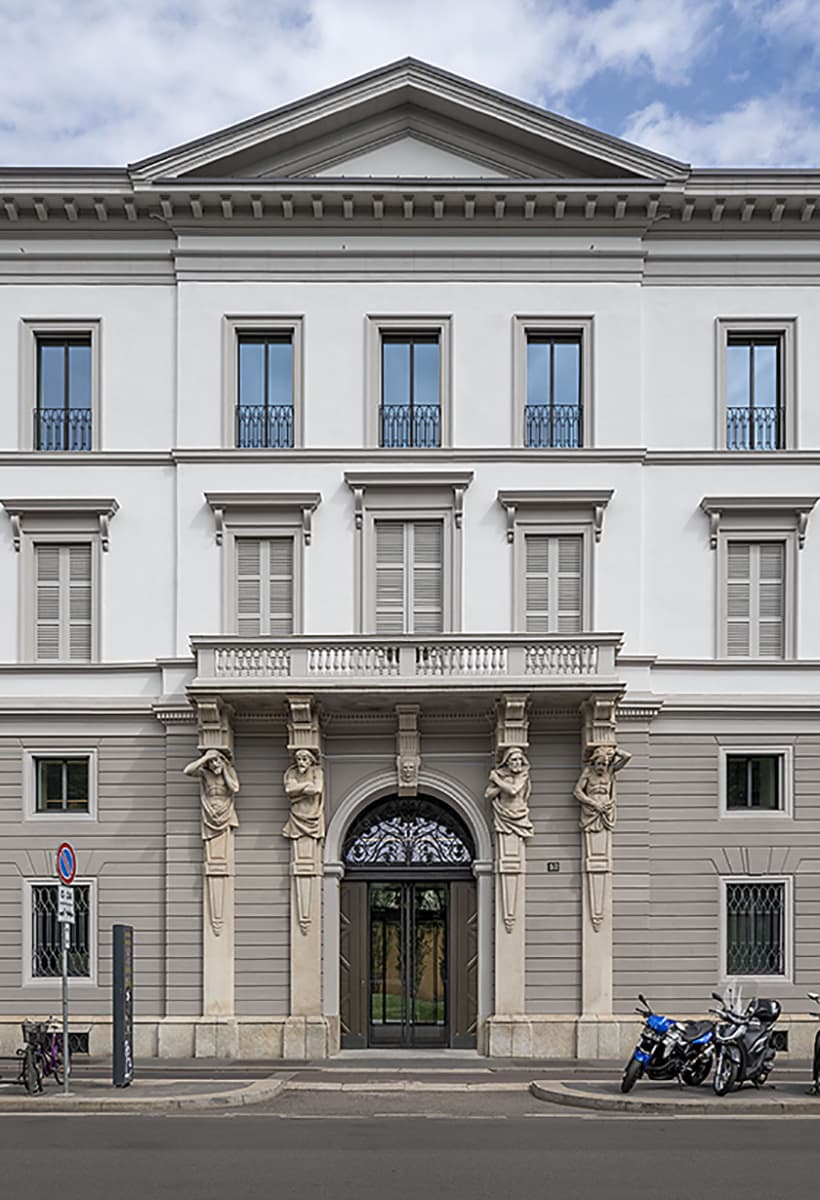 In Milan, the new Art Museum of the Luigi Rovati Foundation in a carefully restored historic building houses, inside an underground extension, a precious collection of Etruscan finds in dialogue with works from different eras. To reflect on our roots and on a wider idea of the future

In the heart of Milan, in Corso Venezia 52, one of the most refined historical areas of the city, right in front of Piero Portaluppi's Planetarium, since last September there is the Museo d'Arte della Luigi Rovati Foundation.

A new star, but to see it shine intensely you have to go down into the underground space, accessible via a stone staircase from the entrance of what was the Palazzo del Principe di Piombino in 1871, then Bocconi, then Rizzoli and now Luigi Rovati Foundation.

Thus the surprising curtain opens on a collection of Etruscan artifacts, precious vases, in buccheri and impastos, jewels and cinerary urns, which shed light on the history of a civilization that prepared itself with a technical quality kit and representative sublime to continue life after death.

The archaeological collection of the Foundation born in 2016, which includes the Warrior Cernuschi, the votive bronze chosen as the symbol of the Museum, today presents over 250 finds among the more than 2,000 in the collection, the result of alliances with Italian and international public and private bodies, such as the Civic Archaeological Museum of Bologna.

"We wanted to make this place a center of knowledge and social utility open to the community. The Scientific Committee is coordinated by Professor Salvatore Settis; the Museum is a venue for exhibitions, conferences and seminars, study activities and cultural research on the city, the whose concept, as we understand it today, was developed precisely by the Etruscans", explains Giovanna Forlanelli, president of the Foundation named after Luigi Rovati, doctor and entrepreneur, founder of Rottapharm who died in 2019. 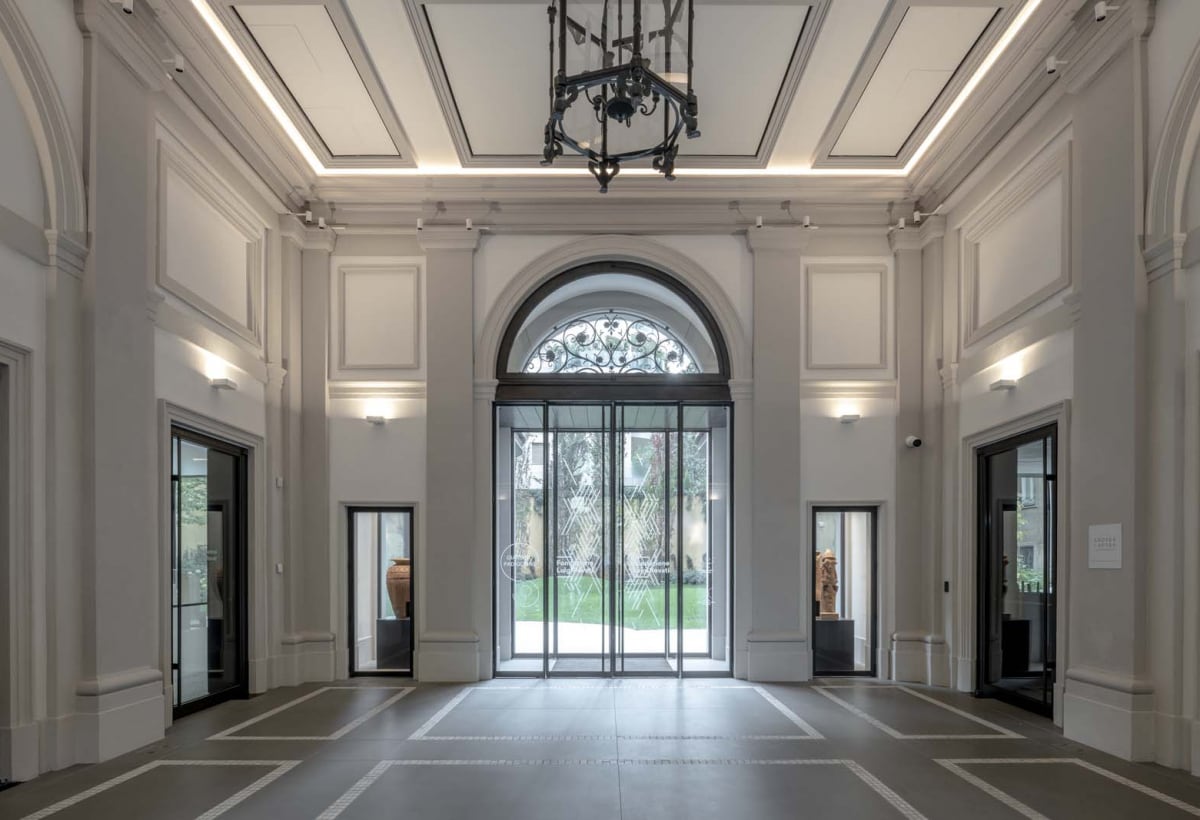 4
The entrance hall, the central hub which also leads to the back garden and the pavilion for temporary exhibitions.

The underground renovation, redevelopment and expansion project curated by studio di Mario Cucinella has taken care of transforming the building into a modern museum space, one of a kind.

A 3,000 square meter sustainable machine that finds coherent answers in relation to the fundamental themes of urban regeneration (through the meticulous recovery of the building) and attention to the reduction of water and energy consumption (even with a photovoltaic system positioned in the pitched roof on the inside of the building) and the reuse of materials.

The work, in relation to the systems, insulation and environmental comfort (thermal, acoustic and visual) followed the dictates that allowed it to achieve LEED certification.

During the five years of the construction site, the building's reinforced structures were suspended on steel micropiles before excavations began under the existing foundations for the construction of the two underground levels, the second of which is intended for depositing the works and to the plants. 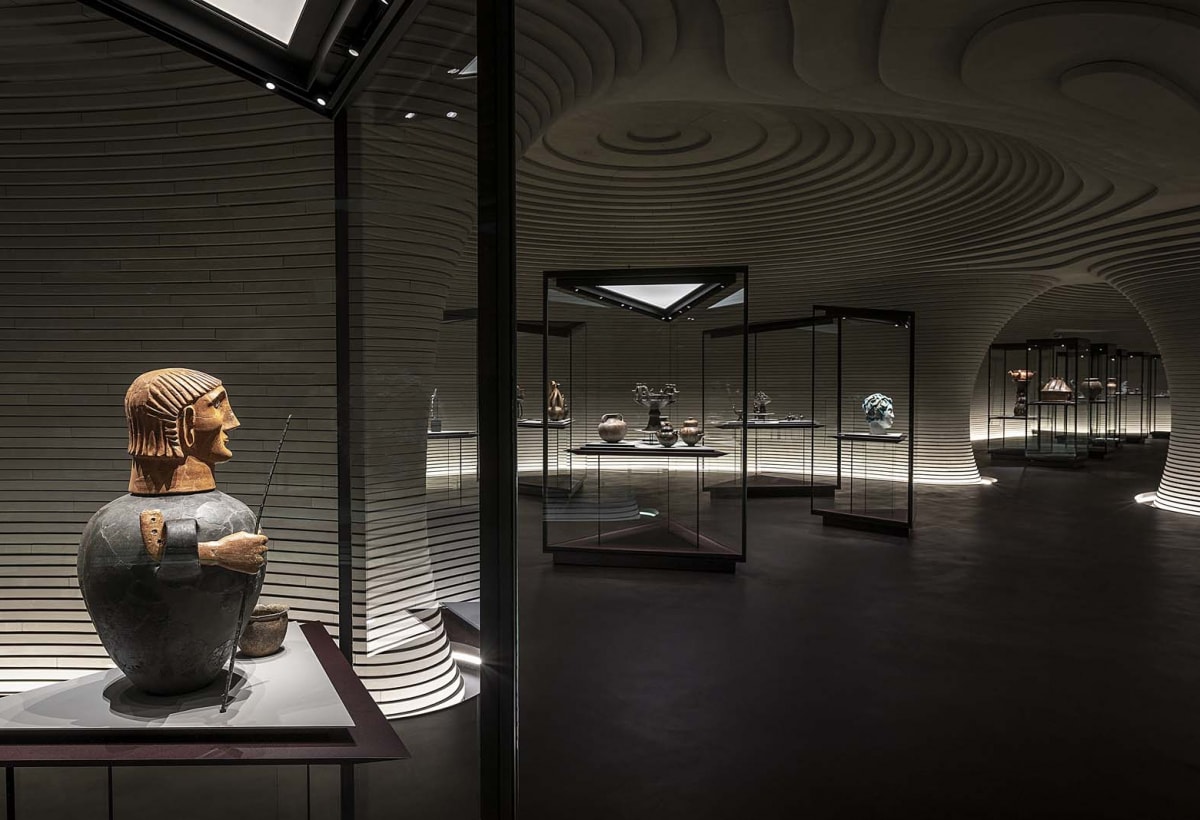 3
A large travertine cinerary urn welcomes the visitor in the underground floor of the Museum (), intended for the display of rare finds from the Etruscan collection and divided into three circular rooms and a large elliptical one: a spatial continuum enhanced by the mono-material choice of the walls that do not know right angles, made of sandblasted Forte Fiorentina stone ashlars of Casone Group, designed and assembled one by one.

“Architects have the privilege of first imagining the space they are going to build. Transforming an immaterial thing into a material one is an extraordinary (and risky) mental exercise that has to do with the paradigm of time. Here it was a bit like looking at the vase and being inside the vase.

I asked myself how to value the historical time, which had left marks and memories in the late nineteenth-century building, and the more contingent one relating to the museum visit.

In a narration that was inspired together by the reading codes of Buckminster Fuller and by the Etruscan necropolis. The Art Museum houses such a powerful collection, even when the Etruscan world enters into dialogue with works closer to us - if we think, for example, of the terracotta vase by Pablo Picasso which evokes the image of the Etruscan banquet - that the it should not dissipate the user's attention.

I tried to express a simultaneity of times in the continuous flow of a spatial itinerary, where the ancient and the contemporary dialogue by opposition or contiguity”, says Mario Cucinella. 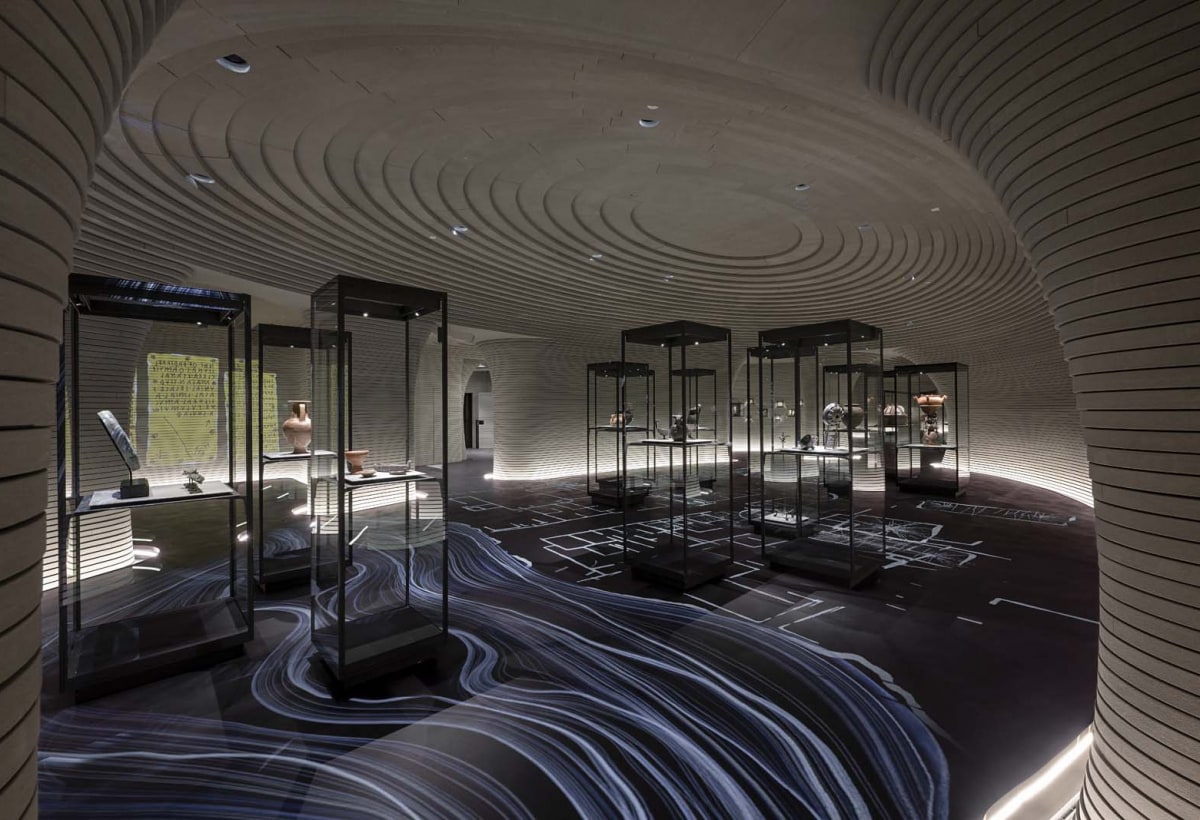 2
Other views of the underground space. Note the ceilings of the domes (which conceal systems and multimedia technology) made by Bertolani Costruzioni in sound-absorbing material to solve the critical acoustics of the environment in a visual-aesthetic continuum with the sandblasted Forte Fiorentina stone used on the side walls. Domes are supported by calendered metal carpentry profiles mounted around the entire perimeter of the excavation.

In fact, let us not forget, as underlined by the sociologist Mario Abis, that "the museum is a physical and mental space, two values that integrate and amplify in the relationships between container and contents, generating gradients of knowledge, empathy, memories, emotions.

Everything participates in the construction of a personal experience that is care in the time that we are and that we are going through. And if time is a representation of mental spaces, it becomes an allegory of expansion in the underground space".

Thus one could hear the echo of a 'Chamber of the Giants' in the sinuous fluidity of the parametric curved lines that shape the three circular rooms and a large elliptical one, built in excavations with stone ashlar walls designed one to one and assembled with an intervention of the highest artisan and technological expertise.

25,000 ashlars were required, the equivalent of one hundred blocks of Pietra Forte Fiorentina with a sandblasted finish anchored to a steel structure (the backstage is partially visible from the large window crowns the children's room), to make the transition to a more intimate world perceptible, hidden in the shadows and in the rapture of an enveloping mono-material, culminating in domed ceilings of various sizes made of sound-absorbing material in special finishes. 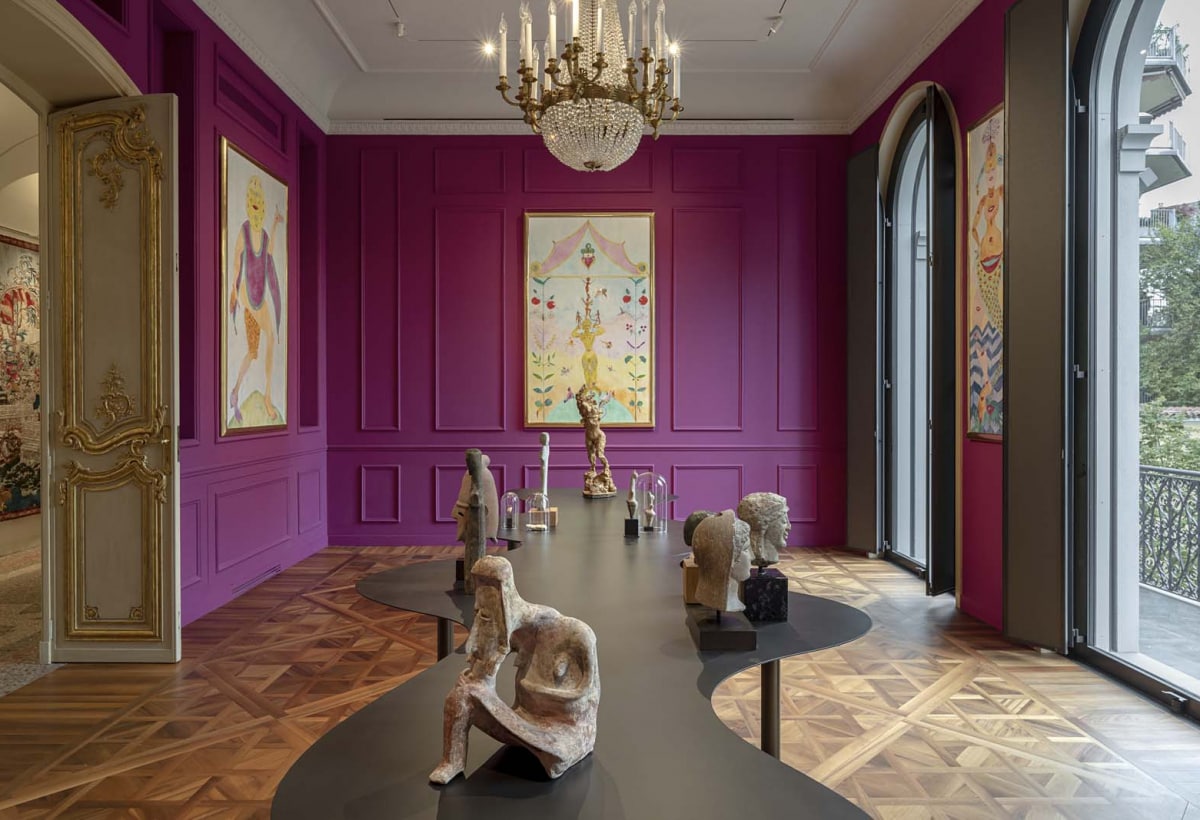 3
The main floor of the 19th-century building restored and redesigned as an exhibition space for contemporary works of art. Above, the Ontani Room, with the artist's drawings that stand out on the magenta walls, it is made sinuous by the table designed by MCA.

“You can hardly see the detachment with the stone used at the heights of the side walls. But we were thus able to resolve the critical acoustics generated by the conditions of the underground landscape. Numerous experiments and teamwork between different professionals have been significant to achieve this solution.

In particular, the full-scale mock-up of a portion of the dome proved to be fundamental", recalls the architect. The gap between the stone slabs, all arranged horizontally and spaced 5 millimeters apart, 5 centimeters thick and one meter long, was then punctuated by small lights which feed the chiaroscuro effects but also by small holes for an optimal flow of ventilation in the rooms.

The final assembly ensured the hidden installation of the systems and multimedia technology in the ceiling which allows, among other things, effective visual mapping in the reconstruction of urban morphologies and building typologies that virtually connect the city of the living to that of the dead.

Equally challenging was the design of the essential but highly sophisticated glass cases with bronze profiles that integrate mini LED spots guided by a magnet to change the light orientation without opening the exhibitors. 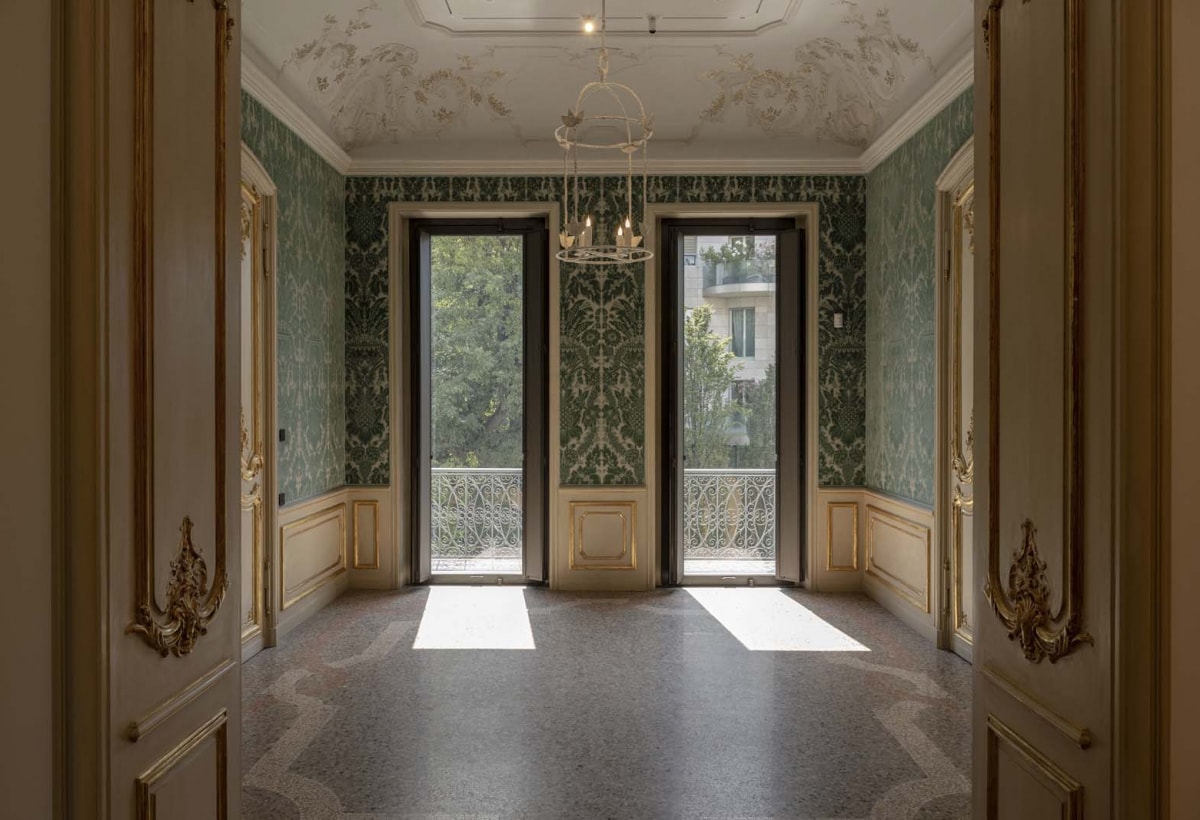 The other spaces of the Art Museum appear very different from level to level.

On the ground ground, the bookshop, ticket office and café-bistro develop on the sides of a majestic entrance hall: the junction square which also constitutes the passage for the back garden, a living room hidden by the perimeter walls that enclose it on three sides and enlivened by the 'telluric' but green expansion of the underlying domes up to the pavilion reserved for temporary exhibitions at the back.

The mezzanine floor has been redesigned for the Foundation's offices, the second intended for temporary events and exhibitions; the last one to the restaurant designed in the interior design by the studio Flaviano Capriotti Architetti (like the bistro on the ground floor) and embellished with a site-specific work by the artist Andrea Sala overlooking the panoramic window.

On the other hand, the main floor (the first) where the architecture by Ferdinando Reggiori and the interior by Filippo Perego, dating back to the first half of the 1900s, had left behind a heritage of wainscoting, gilded doors, inlaid parquet, marble fireplaces and tall eighteenth-century mirrors, painstakingly recovered, has been reconfigured as an avant-garde space for welcoming the works of contemporary protagonists, from Lucio Fontana toAndy Warhol together with new site-specific interventions, balanced in the juxtaposition with weighted presences from the Etruscan era.

A journey among other stratifications and contaminations of the building that reflect the evolution of the historic city and of our roots not detached from the present and from an idea of the future.