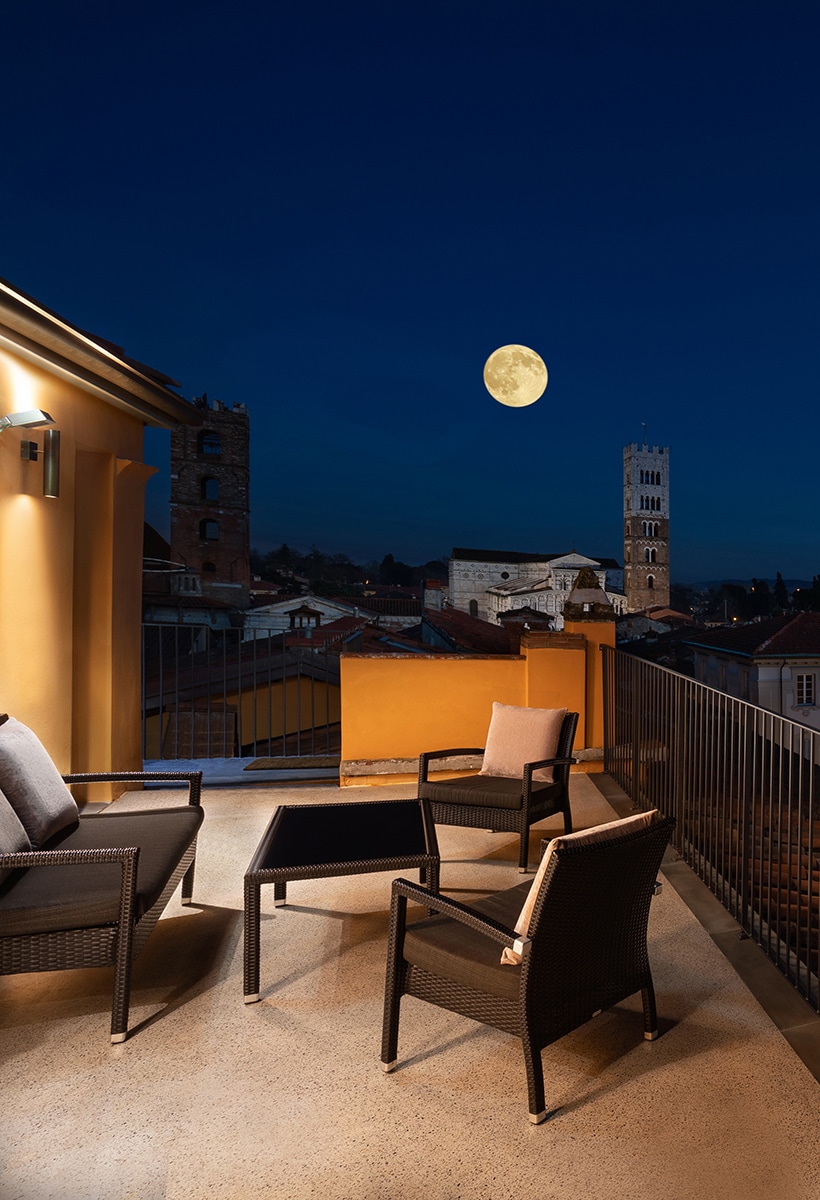 At the Grand Universe Hotel Lucca, precious silks and velvets, brass and wood, decorated plaster and bright colors suggest a journey back in time, into the history of a city and a place. Both tradition and innovation

If every place on earth has a story to tell, the past certainly cannot be forgotten in the center of Lucca, the marvelous Tuscan city with its walkable ancient walls. This is especially true in the case of the majestic building in front of Teatro del Giglio and adjacent to Piazza Napoleone, previously the private palace of the Paoli family in the 16th century, and already known as Hotel Universo since 1857. The hotel has gone down in history as a meeting place for some of the greatest names of music and theater, since its rooms have hosted personalities like John Ruskin, Giacomo Puccini, Giuseppe Ungaretti, before the facility was closed in recent years. Famous anecdotes include the encounter between King Victor Emmanuel II during a visit to Lucca and the owner of the hotel, who introduced himself to the sovereign as “the owner of the Universe,” receiving the reply: “Good for you! I have to settle for being the humble ruler of Italy!” The Tuscan taste for over-the-top humor? 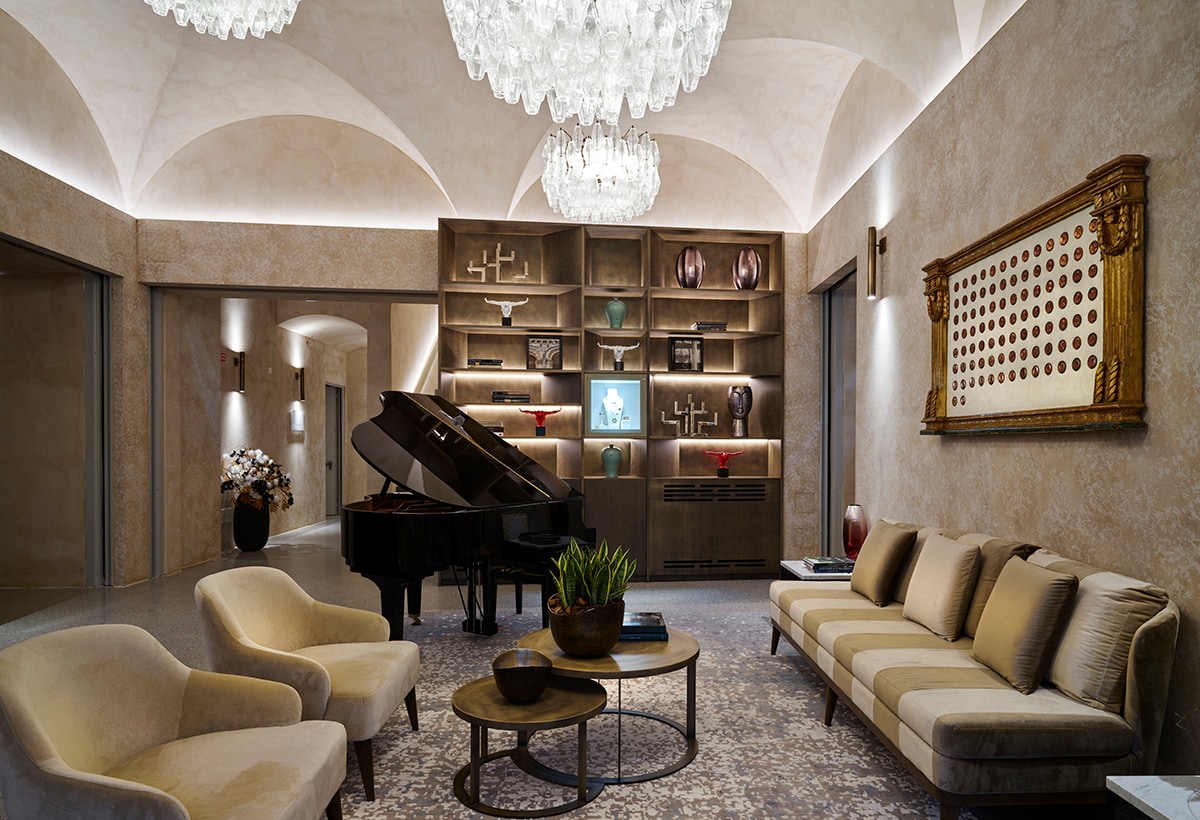 6
The lobby on the ground floor. The refined, timeless atmosphere is underscored by the velvet coverings in the typical hues of the Florentine Renaissance, custom-made by BM Italia, in harmony with chandeliers by Venini and a carpet by Studio Maleki. An exclusive tribute to the history of the place can be seen in the collection of antique coins of the House of Savoy, in a sophisticated wall-mounted display created by Cristina Conforto Galli Tronca.

“Maybe. But in any case, to ratify the history of the Universo, there is a photograph from 1961 of the jazzman Chet Baker sitting on the windowsill of Room 15, where he stayed, overlooking Piazza del Giglio, where he entertained passers-by with his legendary trumpet,” says Giovanni Polazzi, the designer from Studio Archea who worked on the restoration and restyling of the hotel, with an entire update of its design, after the Marcucci group, with the American partner americano Lance Shaner (Marriott), acquired the property in 2016, granting it a new life. Today it is known as Grand Universe Hotel Lucca, a four-star facility of the Autograph Collection of Marriott International, but the people who visit can rediscover the great charm of its history, in the exclusive setting of a place magically outfitted with contemporary comforts and technology.

“To be honest, these have been four years of intense effort,” says Arch. Polazzi, who supervised the worksite day by day from 2016 to 2020, “because the interpretation of the genius loci and the identity of the city of Lucca had to be inserted in spaces where we found problems, but also some nice surprises, during the renovation: lots of added features, many irregular walls that required reinforcement, many items that formed an incoherent mixture, making a completely customized restyling effort necessary, down to the smallest details.” The project required painstaking research on textures, colors and decorations, utilizing the precious silks that since the Middle Ages have represented one of the most important businesses for Lucca, along with damasks and brocades, graffiti with floral and animal motifs, reworked and balanced in the juxtaposition of fine materials of the Tuscan tradition – first of all wood and brass. The designers have been able to make this care perceptible, with a sense of great respect, entering on tiptoe in another world and relying on the skills of local craftsmen.

“
We have imprinted a floral design on the surfaces of the plaster of some of the walls, with patterns in different hues, imagining delicate wall tapestries that simulate the weave of historic silks from Lucca."

From the ground floor, containing the entrance hall, the reception area, the restaurant/bistro, lounge and ample winery, to the 56 rooms of different sizes on the upper levels (six above-ground floors), all the way to the attic which offers a fitness center, a bar and a panoramic platform, where the gaze takes in the neighboring Giglio and Napoleone squares, as well as the distant steeples and rooftops. The layout of the communal zones on the ground floor reformulates the original spatial arrangement, with vaulted ceilings, in an attempt to suggest the narrow streets and large squares of the medieval city, in a balanced variety of zones of brightness and shadow, lights and perspectives, emphasized by the choice of a single Venetian terrazzo pattern for the floors. 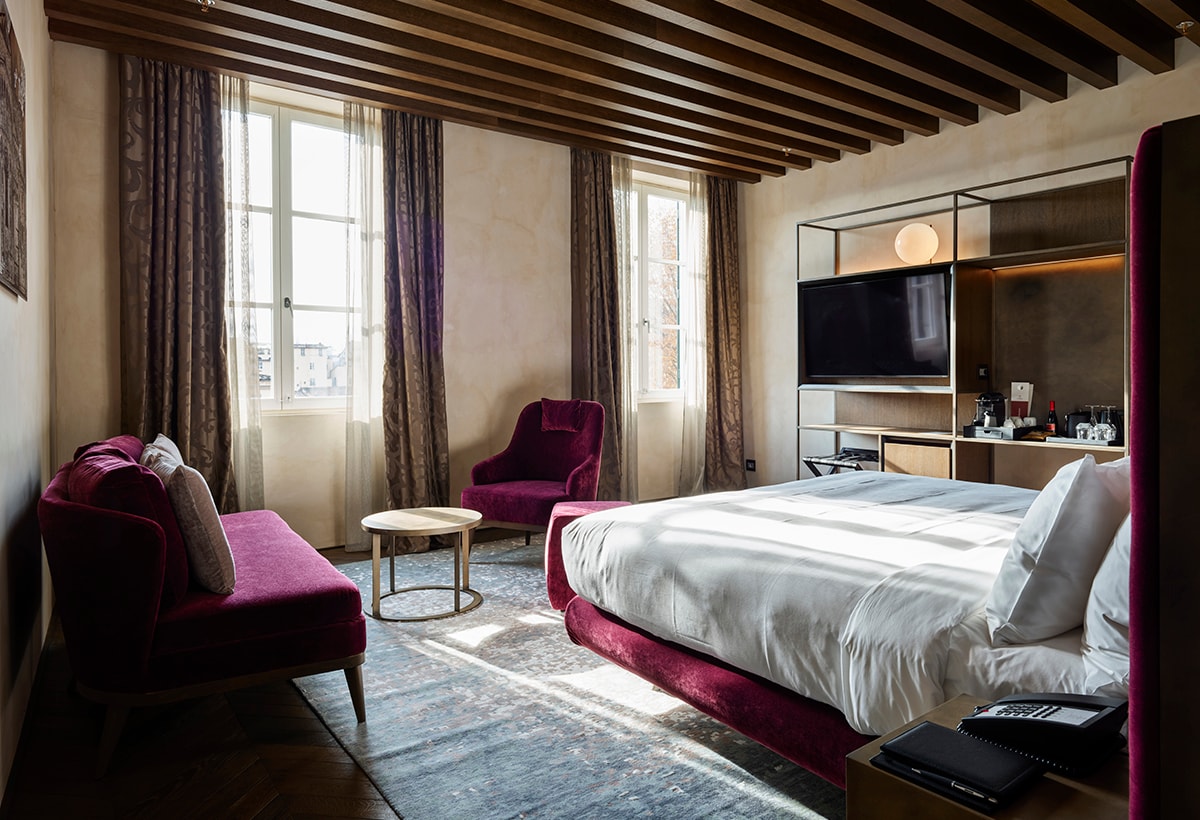 5
Tthe wooden textures of the ceiling and floor enclosures establish a dialogue with the forms of the custom furnishings, in wood and brass, and the very sophisticated silk and velvet fabrics, in grape red, pine green, Tuscan yellow, deployed in finishings down to the smallest details. Carpets by Studio Maleki.

French herringbone parquet, a tribute to Napoleon and Elisa arriving in Tuscany from Paris, pervades and warms the entire landscape of private spaces. Bookcases with slim, light profiles in burnished brass, marble tables and suspension lamps in glass and brass, seating enhanced by velvet covers in the characteristic hues of the Florentine Renaissance, with custom carpets, become a prelude on the ground floor to the refined atmosphere of the guestrooms, where custom wardrobes and multifunctional furnishings in wood with brass details meet with other vivid colors in the finishes and coverings of furniture and walls: silk fabrics and velvets in grape red, pine green and  sunny Tuscan yellow. All signs of the highest sartorial skill.

“
The interpretation of the genius loci and the identity of the city of Lucca had to be inserted in spaces where we found problems, but also some nice surprises, during the renovation: lots of added features, many irregular walls that required reinforcement, many items that formed an incoherent mixture, making a completely customized restyling effort necessary, down to the smallest details."

“We have also imprinted a floral design on the surfaces of the  plaster of some of the walls, with patterns in different hues, imagining  delicate wall tapestries that simulate the weave of historic silks from Lucca,” Polazzi explains, concluding: “These were the characterizing interventions, though the making of the outdoor emergency staircase  on Corte  Paoli was a true architectural challenge, conceived as a sculptural installation in painted metal that wraps around a single large central pillar concealing chimneys, bringing a new identity to the surrounding space.”