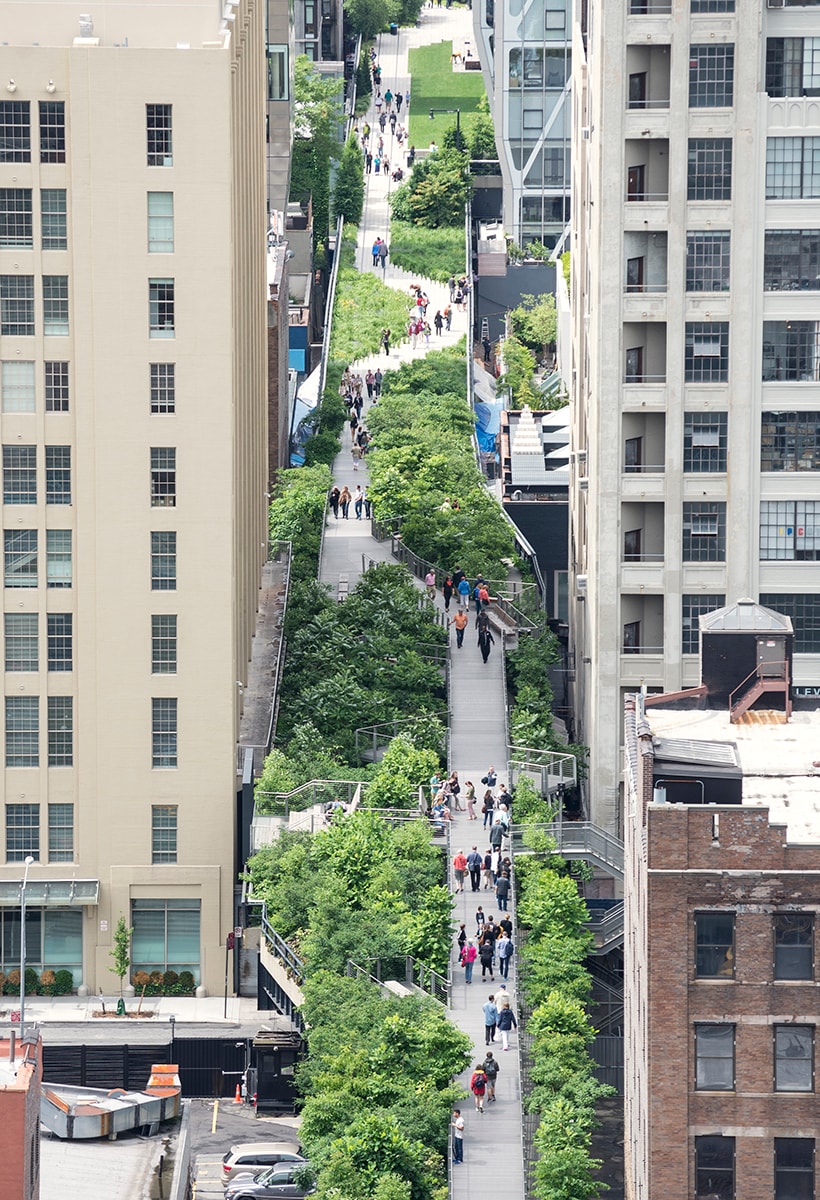 Reinventing unused spaces
Successful concepts and projects in the spotlight to restore the luster of cities. Overpasses, shopping malls, car parks, railway lines and other unused urban spaces are redesigned and repurposed in a new guise

How many times as children have we played “What if ...?” A pastime capable of freeing the imagination and making the unimaginable happen. Fortunately, artists, creative designers, architects and urban planners from all over the world continue to dream, invent and hypothesize. And the focus today is our cities, which thanks to the pandemic, emptying and getting rid of crowds and traffic, have shown a new face. And so we started playing again asking ourselves: what would urban spaces be like if they could be transformed into more sustainable areas and more cheerful and joyful places? 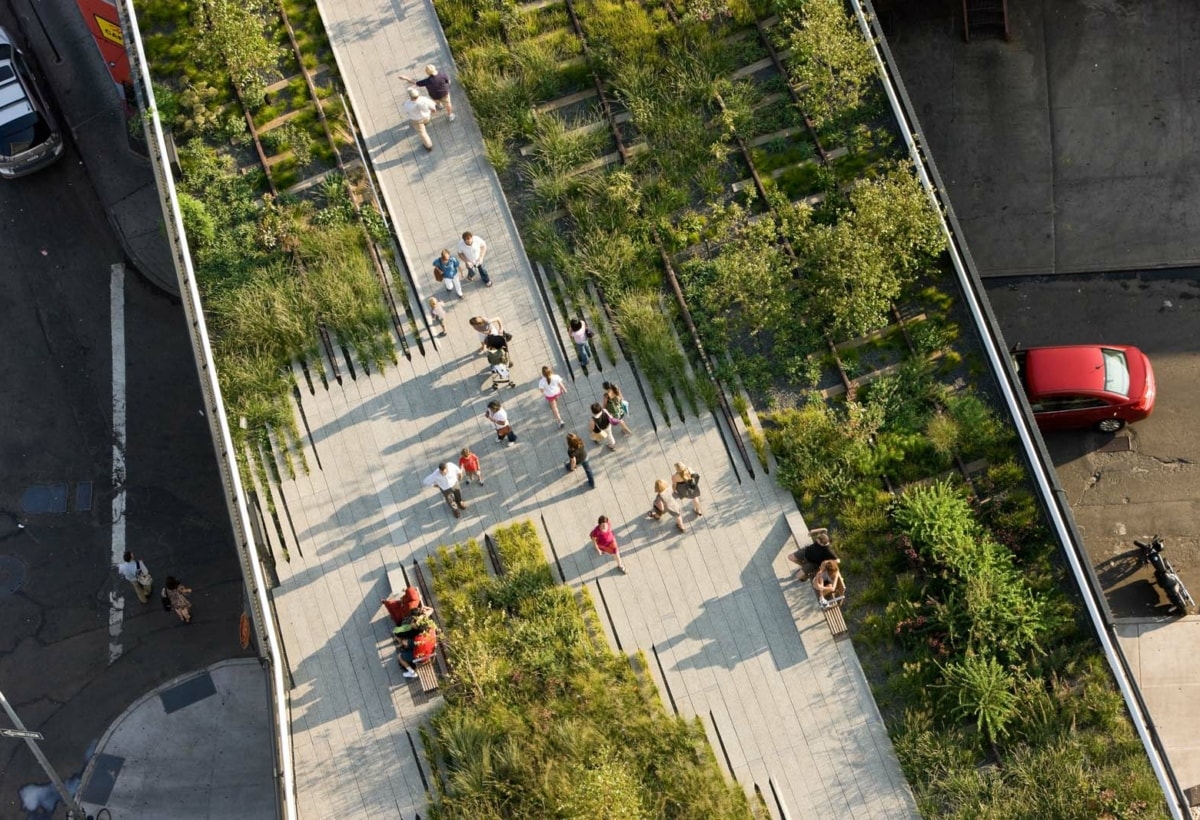 We all know the famous New York High Line. A collaborative project that saw the American architecture firm Diller Scofidio + Renfro work with urban planner and landscape architect James Corner and garden designer Piet Oudolf to revitalize two and a half kilometers of post-industrial ruins. Today the rails of the abandoned railway are used by the citizens of the Big Apple as a park. A green lung that combines wild nature with urban nature but also the social and cultural nature of the city. A real springboard for projects of revitalization and transformation of obsolete and unused urban areas into spaces of common use. 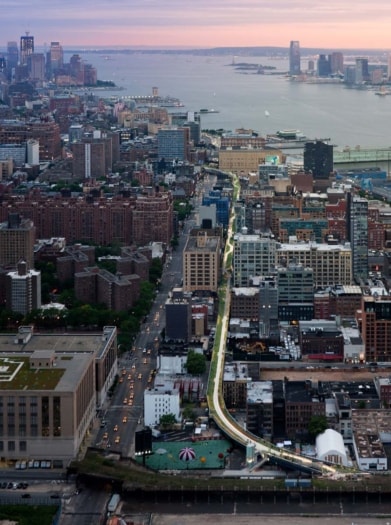 And it is Diller Scofidio + Renfro together with PLP Architecture and CRA-Carlo Ratti Associati who rethink the space now abandoned for years at the Porta Romana station in Milan. The project, called the Roman Park, will be built to host the 2026 Winter Olympic Games, but the long-term vision is to create a green expanse that develops throughout the neighborhood. The High Line of Milan, in short. Which sees buildings designed for sporting activities connect in a fluid and natural way to a profusion of suspended gardens, woods, water and walkways that chase and intertwine sinuously on different levels. The Public Work group, landscape architects and urban planner Ken Greenberg show how the space to work on is not only that of abandoned areas, but also that which remains unused because in a position considered unhappy. 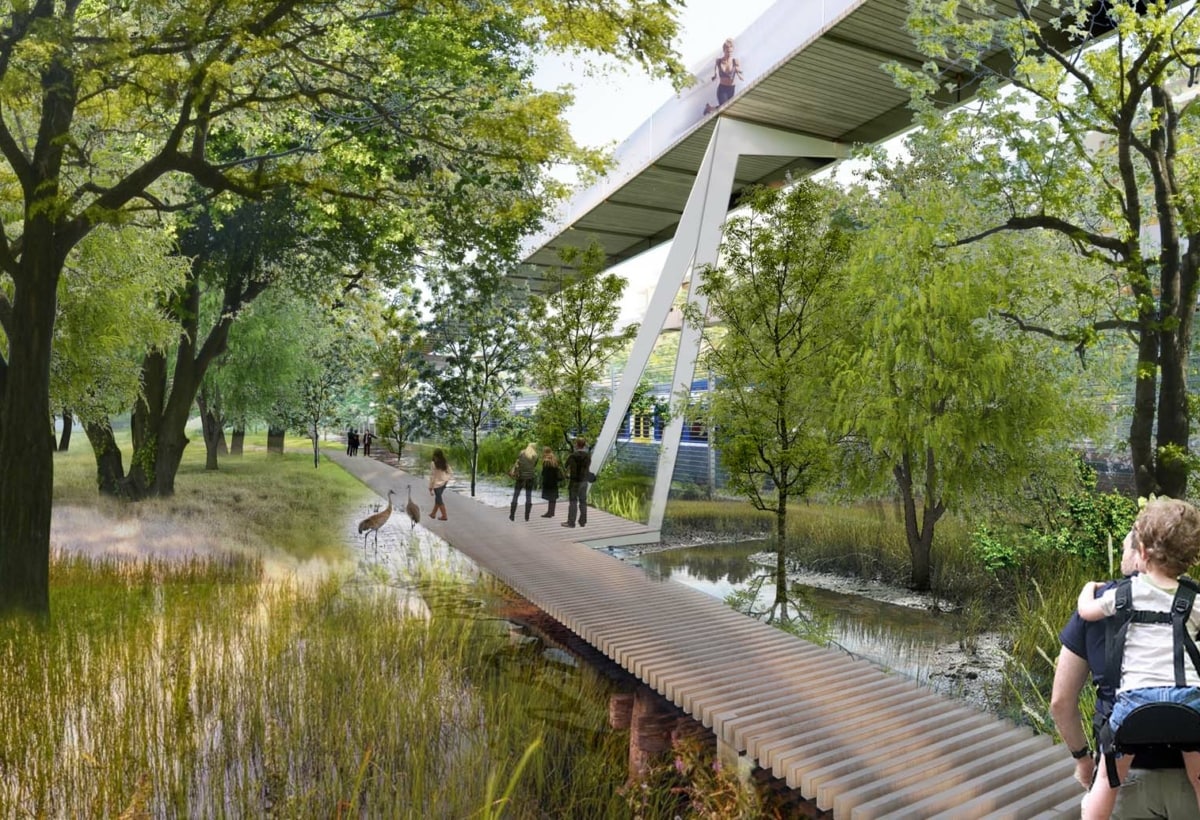 Just like that stretch of nearly two kilometers that is trapped under the Gardiner Expressway, a freeway that runs through Toronto. Thus Bentway was born, a project that aims to transform an unused urban space into a new area of the city full of greenery, parks and gardens but also spaces of interrelation and sports, markets, open-air galleries and skating rinks. 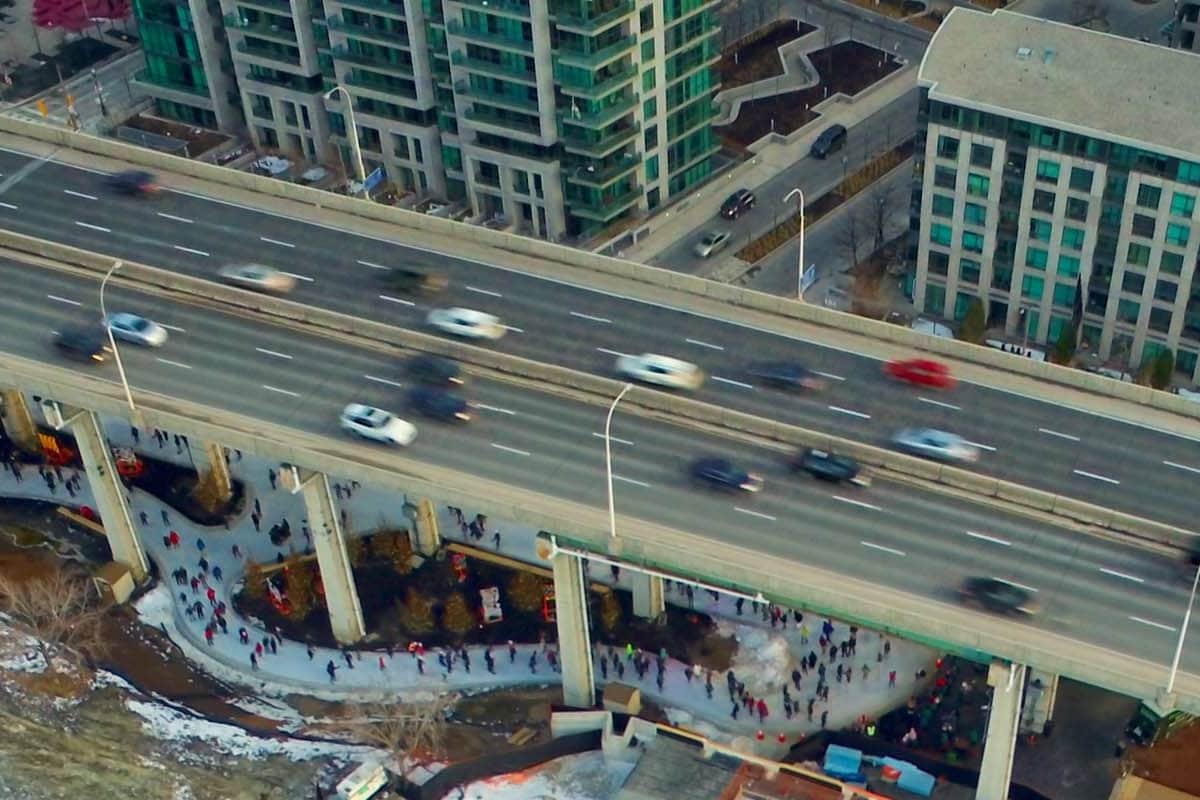 But let's go back to Milan where T Spoon signs GuardaMI, the reconversion project of the Bussa overpass.

GuardaMI is not a simple project, but an operational strategy capable of transforming a space that has lost its urban function into an extra-space, a living and lived area, to be returned to the city. Here all the elements will be used and used by the various actors-users, who are urged to live, touch and participate in the transformation processes of the space itself. A real connection between the city and its public spaces. 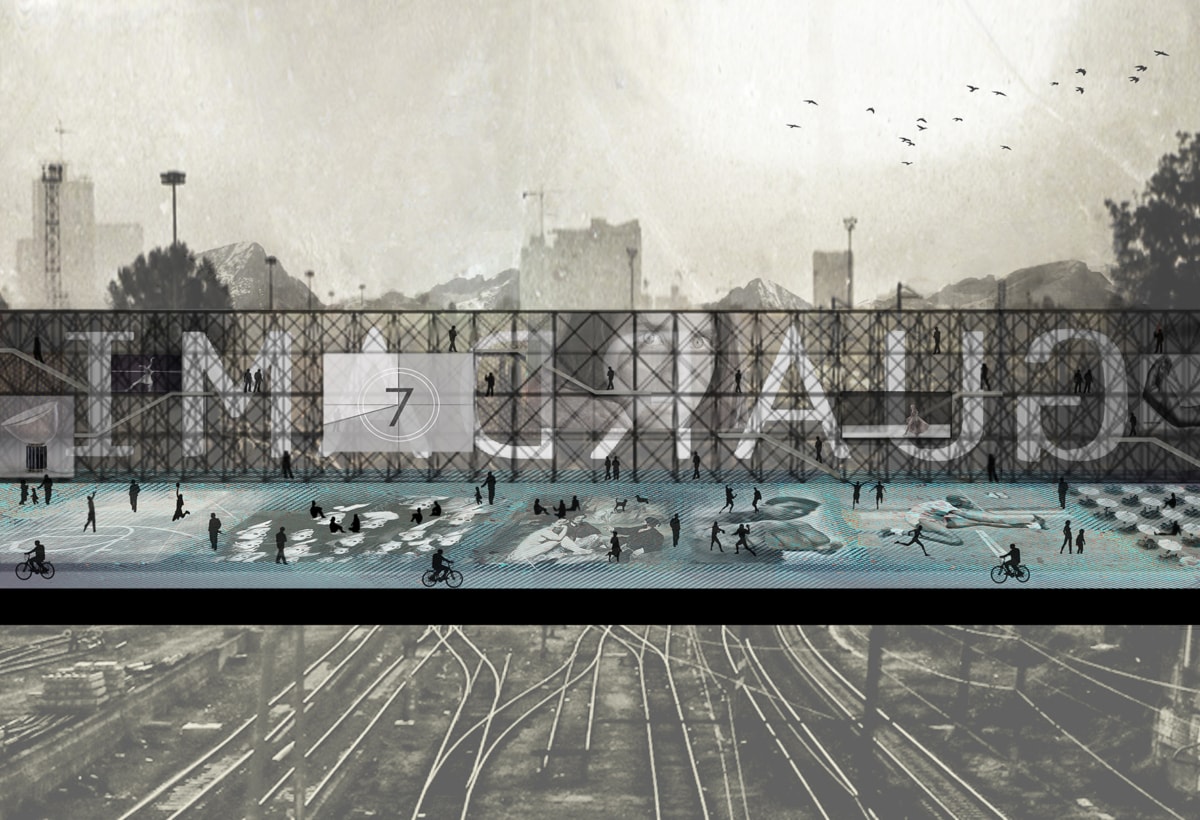 More ironic and playful, almost an artistic installation, the proposal that the artist Camille Walala suggests to the city of London: transforming the busiest urban artery of the capital, Oxford Street, into an urban path full of fountains, sculptures and continuous spaces to meet, stop and re-connect. Obviously all following the graphic and rainbow language of the creative. 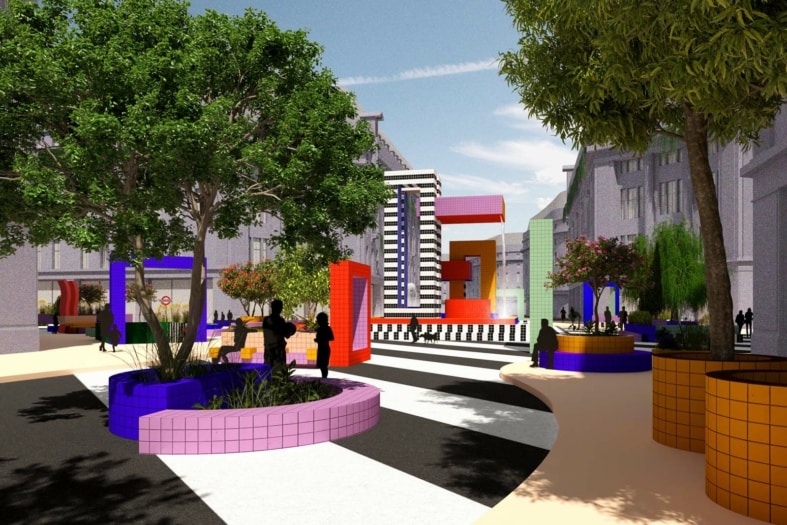 To stay on the subject of urban poetry, MVRDV and nendo, two visionary designers, have contributed to add their poetic lyric to two unused spaces in Taiwan and Japan respectively.

MVRDV demonstrates how the industrial ruins of the past, specifically the remains of the China-Town Mall, one of the many malls closed due to the dominance of online shopping, can return to shine. And so on the ruins Tainan Spring blooms. A sort of archaeological recovery work, where all the pieces found are preserved, restored and completely integrated into the new project. A new way of preserving the heritage, to understand the history of the site and appreciate the former commercial center as an important part of the history of Tainan. Pools, ponds, gardens and jungle coexist in an innovative example of circular economy. 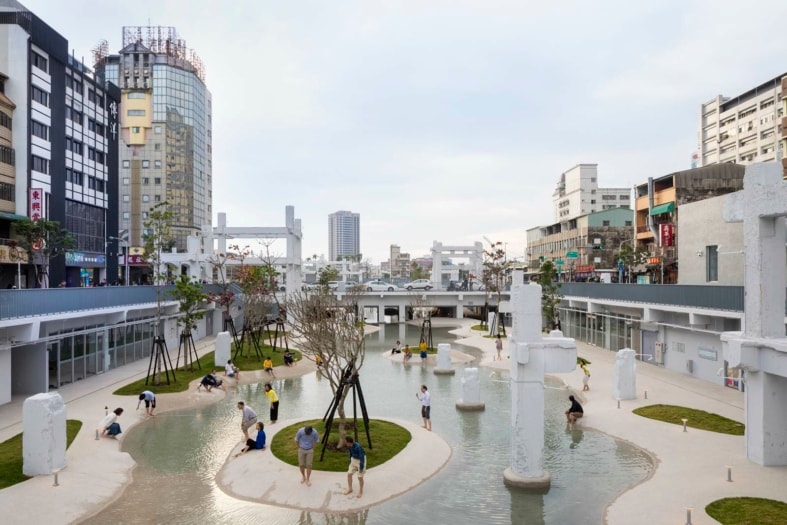 The Japanese studio nendo began exploring urban design by creating CoFuFun Plaza. A project that sees Oki Sato, engaged in the development of the area in front of Tenri station in the prefecture of Nara, near Kyoto. More than 6000 square meters, completely empty and unused, which today shine thanks to multipurpose monoliths of white concrete. Disc-shaped structures – concave and convex – which draw inspiration from the morphology of the landscape but also from the concentric circle shape of typical Japanese tombs. A soft and poetic weave that draws an idyllic landscape where you can play, relax, perform, sport, or simply sit down to slowly savor a cup of tea. 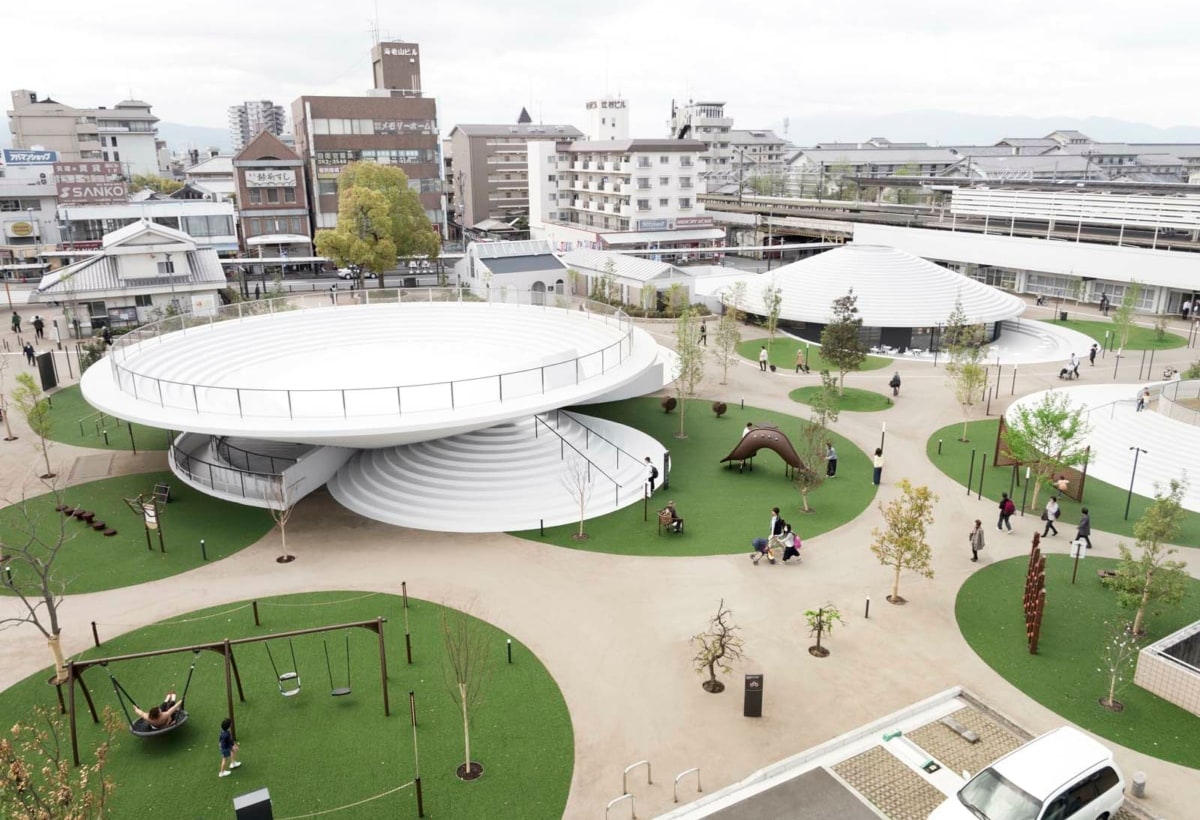 Australia also has its say in the recovery of disused spaces, which are part of a much larger project involving the city of Melboune. During the Design Down Under week, the Finding Infinity eco research lab revealed a series of concepts and prototypes designed by various Australian architectural firms, which aim to recover unused areas to make the city zero-emission before 2030.

Here are some of the ideas, simple and revolutionary at the same time. John Wardle Architects’ proposal suggests installing maxi canopies made with photovoltaic panels on the roofs of buildings, generally completely unused, to exploit solar energy. In addition to helping fuel the city, these spaces could be used for co-working, gardening or events. 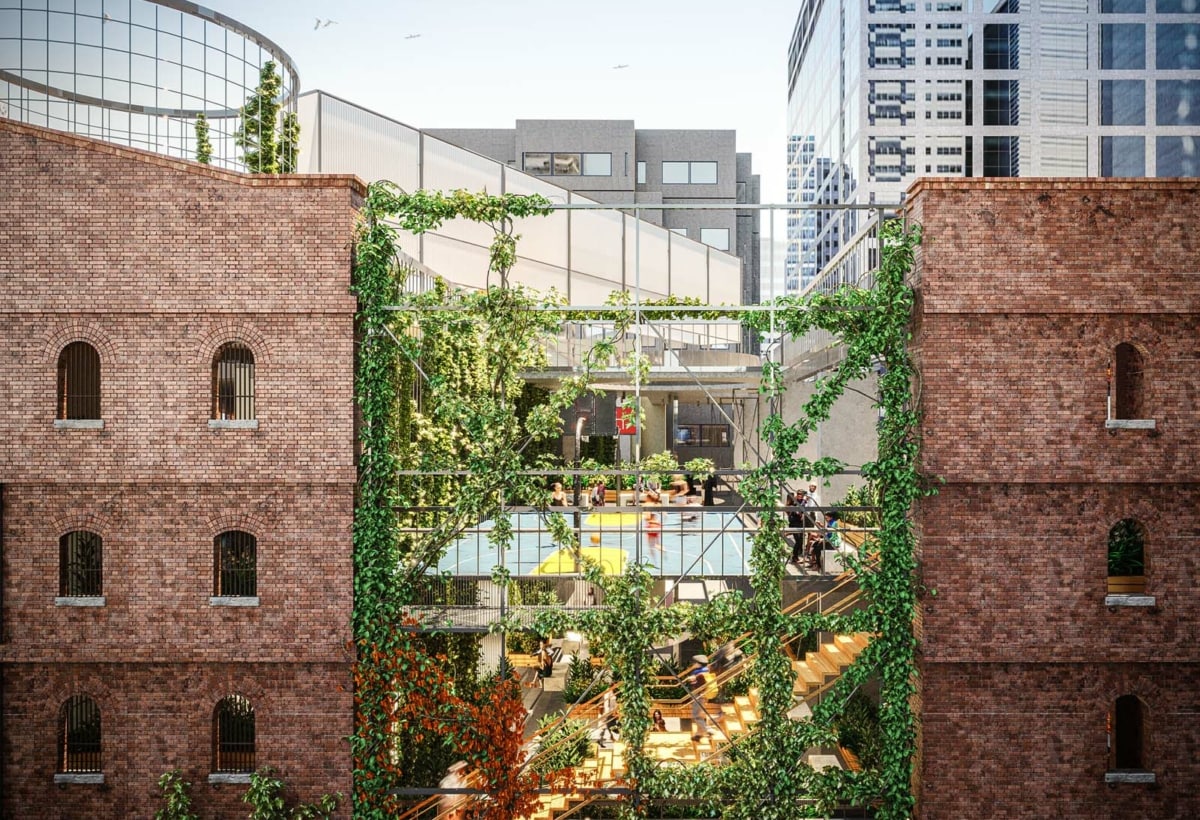 For Clare Cousins Architects a parking lot can be transformed into a basketball court, a space dedicated to offices and the market. As well as for Bates Smart which presented a series of suggestions to improve well-being and the connections between city and nature. Starting from the car. The Australian architecture firm has identified above-ground, multilevel car parks that are not used 100%. And so he proposes to reuse them and give them a new life: creating a parallel story. Thanks to kit elements, such as architectural scaffolding - such as stairs, ramps, platforms, balconies - that are easy to move, add and combine, the designers imagine new places for gathering, walking, entertainment and sports.

And the game continues, imagination and design can be found in many cities, thousands of places and as many abandoned spaces, to give them new life and make them younger and more accessible. Because, as George Bernard Shaw said, “We don't stop playing because we get older, but we age because we stop playing”.