The Future of Mobility, between videomapping and automotive

#stories2023-en
The Future of Mobility, between videomapping and automotive

The future of mobility is sustainable and takes place in Brunico. Lucio La Pietra's video art anticipates the opening of NOI Techpark in the city, a new hydrogen hub at the forefront of the automotive sector

In May 2023, the NOI Techpark Brunico will be inaugurated, a new center for sustainable mobility and the first hydrogen technology park.

Meanwhile, to open the track, video art and technology met in South Tyrol. Merit of a video projection commissioned by the South Tyrolean innovation center NOI Techpark of Bolzano to the Milanese artist Lucio La Pietra.

The videomapping work is projected at the Intercable Arena winter sports building in Brunico before the ice hockey matches. Talk about mobility of the future. Which they assure, it will be sustainable. 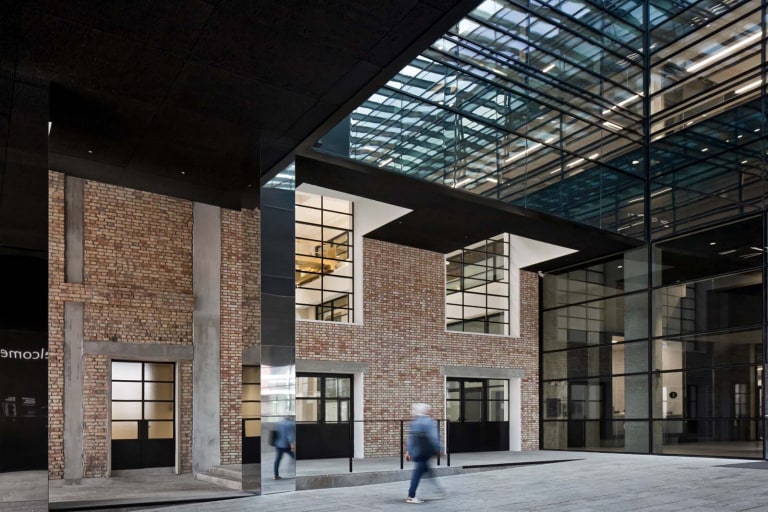 Let's start with the pre-game and screening of The Future of Mobility. Intercable Arena Brunico is a modern ice rink. A multifunctional arena for ice sports (not only hockey, but also skating and curling for example) inaugurated in Val Pusteria just over a year ago, with two rinks and a capacity of 3,000 spectators, based on the project CeZ architecture studio of Bolzano, which in 2014 won the competition for the 'Brunico ice sports facility'. Foundation stone in September 2019, inauguration in October 2021.

"The video – says Lucio La Pietra – represents three levels of mobility: a higher, ideal level, that of animals, in this case represented by the movement of spheres that simulate the flight of birds; a human level visualized by lines that describe the flow of people and things; finally, a third level that describes technological mobility.

The dynamics of the video interact with the drawings positioned on the hockey field, in order to make the projection more engaging and spectacular". 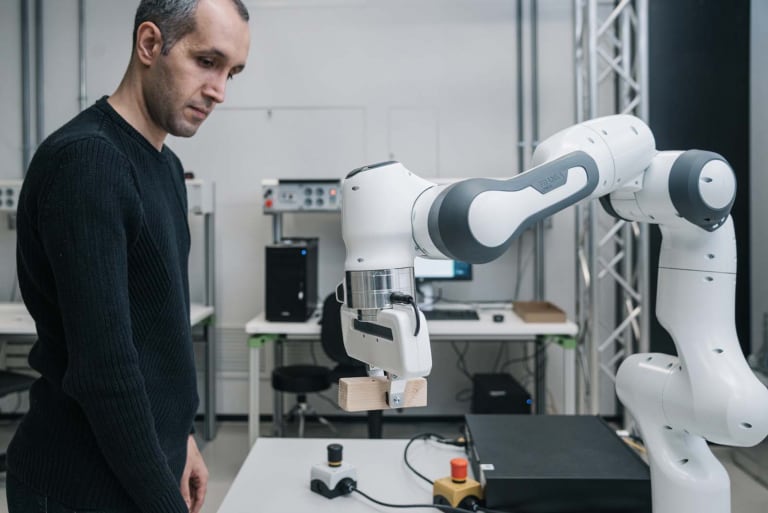 NOI Techpark commissioned the work (where NOI, not surprisingly, is the acronym of Nature of Innovation, innovation according to the nature).

The technology park in Bolzano, in its 120 thousand square meters, hosts 3 research institutes, 4 university faculties, 45 scientific laboratories, 90 companies and start-ups and other institutions engaged in research and development.

It has been doing so since 2017, when it opened its doors, after an international competition in 2007 entrusted the project to the studios Chapman Taylor Italia of Milan and CLEAA of Bolzano, with Andrea Cattacin of Merano.

Its water tower - the Black Monolith, an inclined parallelepiped covered in black oxidized aluminum foam panels inspired by Kubrick's 2001 A Space Odyssey - thus stands today on the recovery of that industrial area: once the world center of aluminum, and now the first district in Europe with Leed Gold certification for environmental sustainability.

In May 2023, the NOI Techpark Brunico will instead be inaugurated. An avant-garde center for the Automotive industry which will be the first hydrogen-powered Science Park, with an innovative storage system capable of guaranteeing a neutral energy supply for its 73,000 m2 structure.

The objective of the new Hub: to stimulate the entire sector towards sustainability, which here in South Tyrol has 800 specialized companies and over 16,000 employees. 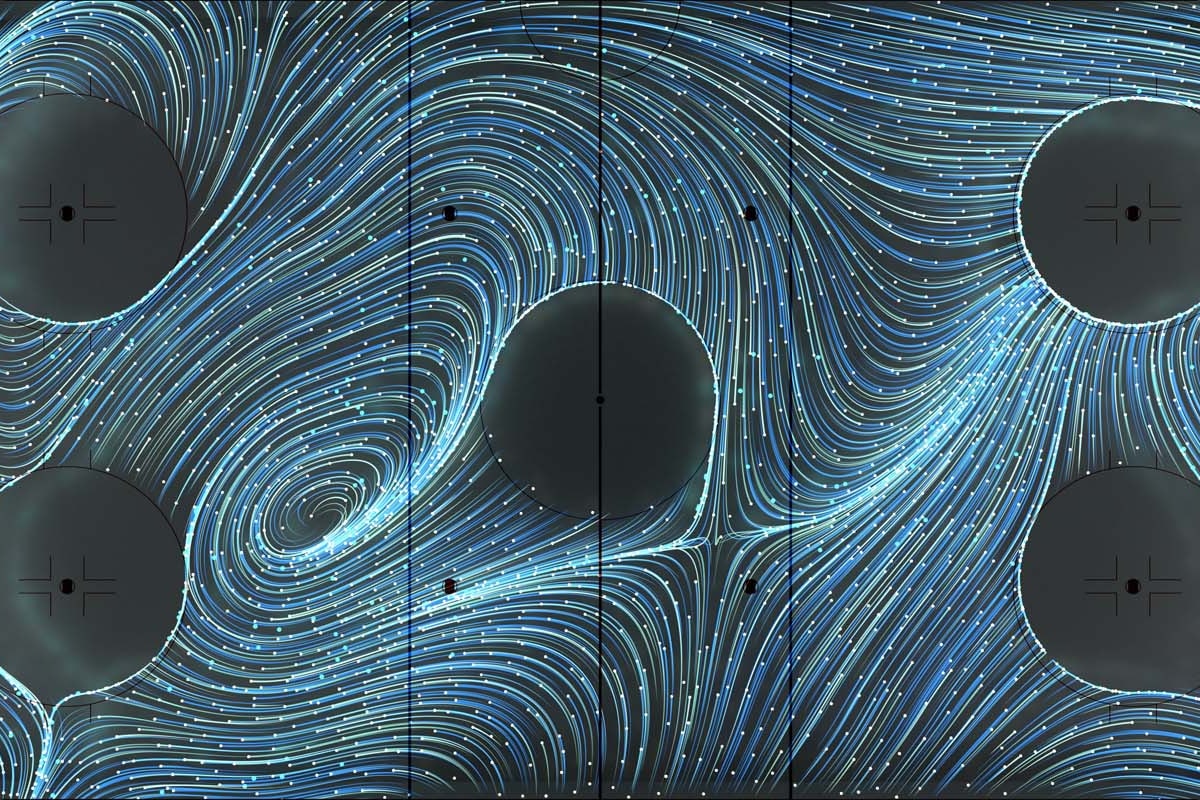 "We are using the months leading up to the inauguration to create suspense and sensitize the population. – reports Birgit Mayr, director of brand & placemaking NOI Techpark – Among the actions put in place is this projection in the Intercable Arena.Intercable is one of the most important companies in the Automotive/Automation sector, as well as among the founders of the Automotive Excellence Alto Adige network.

Thus, in conceiving the projection, we asked Lucio La Pietra to try and answer these questions: What will be the mobility of the future? Who will travel with us? In fact, our planet is populated not only by human beings, but also by animals, flowers, natural elements, but also by machines and... data". 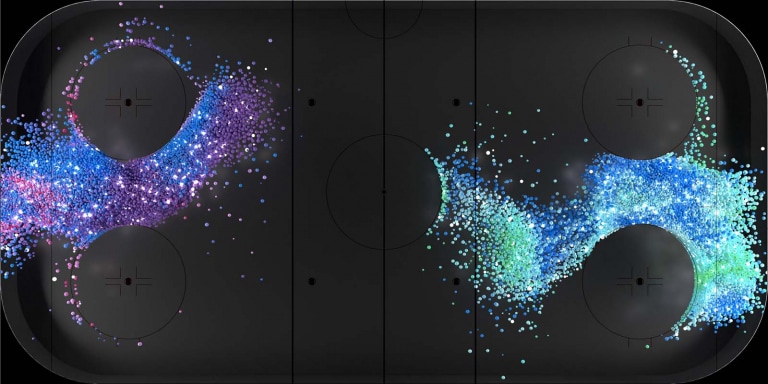 "I met NOI Techpark in May 2022 through Ebner Film&Music of Bolzano who contacted me to participate in the video installation project, for which he specially composed the music."

This is how Lucio La Pietra, born in Milan in 1977, with a degree in Design from the Milan Polytechnic and a surname that connects him to the tradition of research in the field of visual arts that it is that of his father, Ugo La Pietra, active since the 1960s in developing the relationship between man and the environment in art - but also in design and architecture.

Works that his son Lucio personally takes care of today as president of the Archivio Ugo La Pietra (and which he would soon like to highlight in a documentary on his life) while he is a professor at the Academy of Fine Arts of Brera and at the Creative Academy of Milan; he founded the graphics studio Studio Duepiù </ strong>, the video production house Produzioni Lume and the fablab Opendot.

With important exhibitions and awards - from the Milan Triennale to the MAXXI in Rome in 2014, passing through the Power Station of Art in Shanghai and the Frac Center in Orleans - yours is a path that has taken on movement, starting from static graphics and then arriving to the field of installations video. And the movement is right at the center of his latest work.

Particularities of the creative process

"The design approach was the same as always: combining concept and showmanship, putting the viewer at the center and providing him with clear tools to interpret the message - says Lucio La Pietra - in giving maximum visual expression and impact scenic to the concept of mobility, I tried to find a non-figurative language capable of declining it in three different levels.

I translated the upper level of the animals with a flight of colored spheres that simulates the aggregations of birds; the second ground level, populated by people and things, with lines describing flows with coherent directions; the last level, the technological one, with a network of connections that are activated and deactivated in a disordered motion.

To make the installation even more spectacular and engaging, I then tried to integrate the video with the projection surface, making sure that the dynamics of the three-dimensional graphics interact with the circular designs positioned on the hockey field .

To do this, I had to optimally position my virtual camera in Cinema 4D, so that the three-dimensionality of the graphics appeared 'real' to those who enjoyed it live. 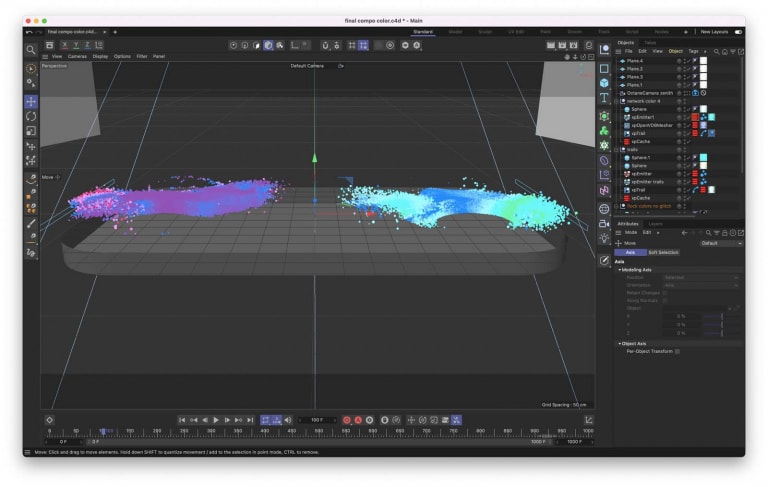 In hockey pre-games, the rule is that the projected contents favor only one point of view, namely that of the video camera which shoots the event live, facilitating the frontal view of the spectator from home, but penalizing all the others.

What I wanted to do was take into account the position of the spectators in the stands in a semicircle, all around the projection, making everyone appreciate that three-dimensional simulation in the same way, regardless of the assigned seat .

Not least among the difficulties, there was that of reducing rendering times as much as possible, but by testing different settings of the X-particles management system of the Insydium and its Cycles4D rendering engine, I was able to deliver the video in time for projection rehearsals and music composition".

The school of the future

Green offices: a net plus energy building in Stuttgart

Pininfarina's masterplan for a new city in China