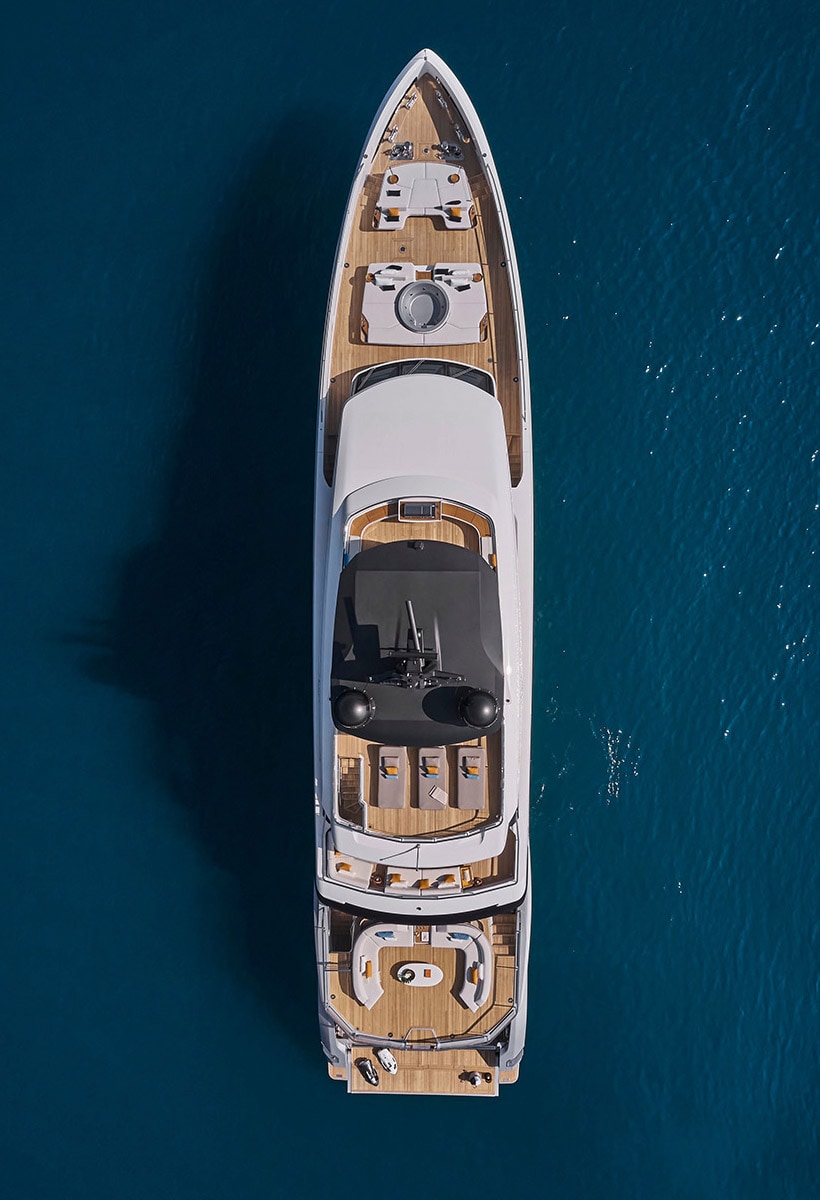 Grande Trideck + One, Azimut’s flagship, redesigns and renews the traditional concept of the yacht. Its terrace suspended in the air and endless outdoor spaces create a direct contact with nature and offer new interiors. Coherently interpreted by Achille Salvagni

Three decks plus one. It could be passed off as a mere architectural detail but on a 38.2 meter yacht, it’s far from predictable. Especially for Azimut, which with the Grande Trideck brings its flagship to the market. Flagship + One. Because an extra aft deck added to the traditional three creates an optical effect of cascading terraces descending to the sea. A sea view terrace of 30 square meters appearing suspended in the air two meters from the water. A logical architecture that is also a symbol of Azimut’s capacity for design, stylistic and constructive innovation, interpreted by Alberto Mancini, who developed the project with dynamic and sporting lines on the outside. Innovation to create spaces with a more spontaneous life on board and increased contact with the sea. In addition to the sea view terrace, Trideck has a sunbathing area on the sun deck, an outdoor dining area on the upper deck and the beach area. The inclusion of the sea view terrace also allowed for the creation of the private patio, a sheltered outdoor area that precedes the entrance to the saloon. 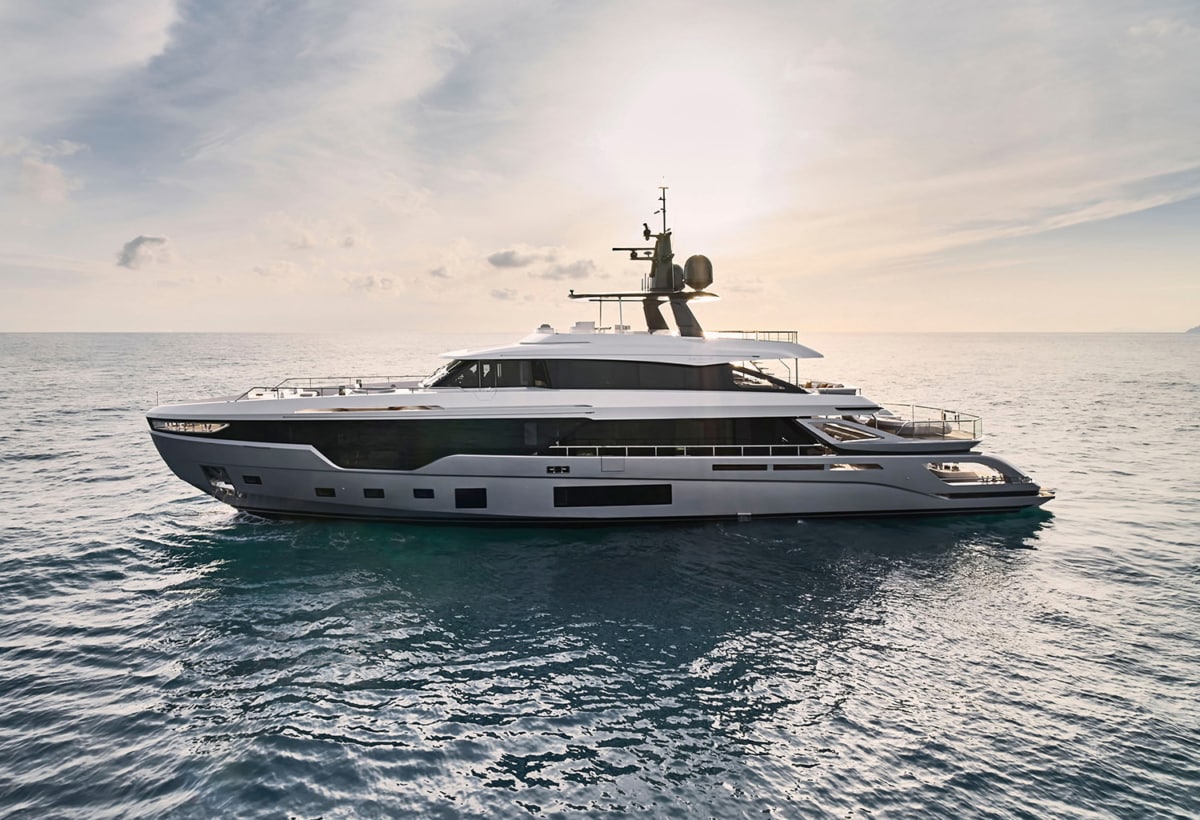 6
Azimut’s first three-deck yacht and the largest boat ever built by the shipyard, Azimut Trideck is the symbol of its capacity for innovation in styling, design and construction.

The interiors are the work of Achille Salvagni, who designed them with great originality, uniqueness and attention to every detail, reinterpreting the space and deviating from the traditional layout. The interiors are dilated to recount a new way of living on board expressing a strong urge for conviviality. A fundamental choice linked to this vision was to move the dining area from the main to the upper deck: a solution that gives lightness to the main saloon. In this way the main deck becomes a completely informal area, with a saloon as the living area, making a break with the nautical schemes of the past and being transformed to respond to the new urge to experience the on-board space in more relaxed and sociable ways. The decor turns on combinations of different materials: carpets that fit into the geometric teak parquet, light wood alternating with leather upholstery, elements of glossy dark mahogany contrasting with the light tones of the main woodwork, and in harmony with the white lacquered ceilings and then brass and Cardoso stone for some finishes. 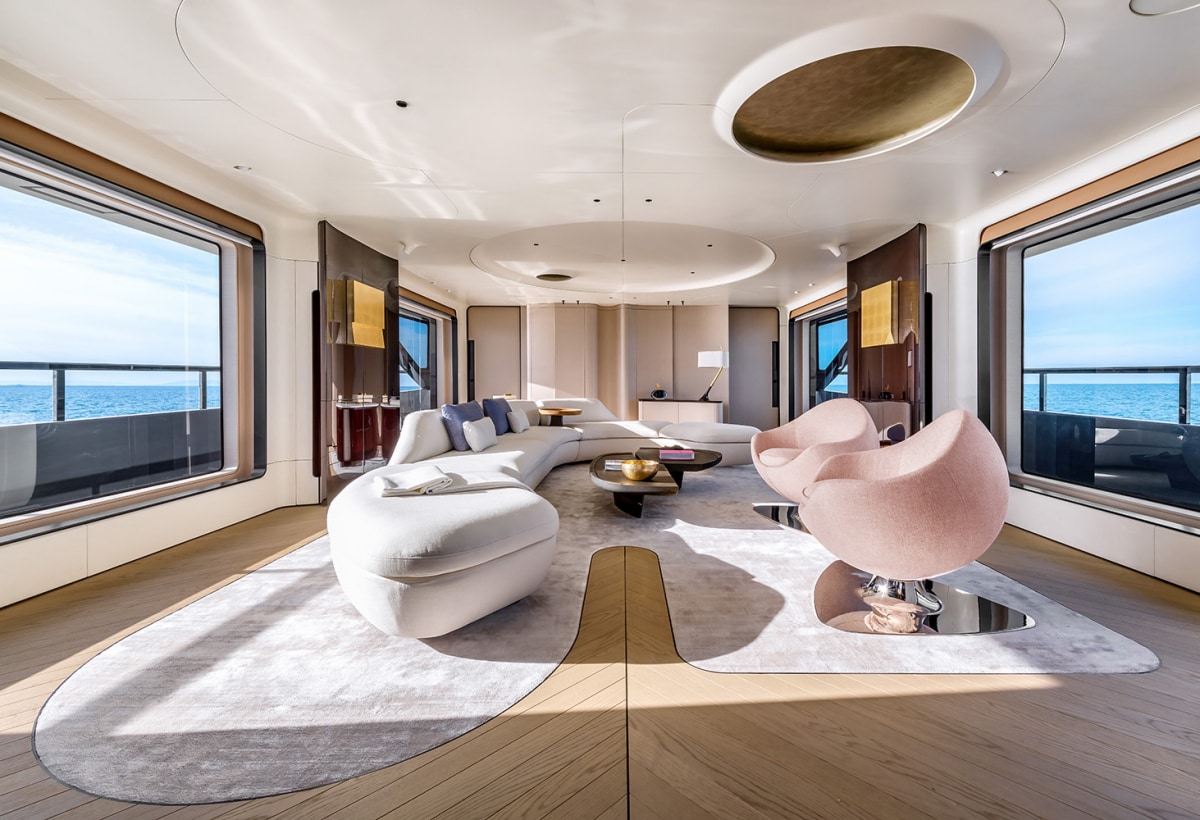 5
The Main Deck is an informal area: the living space breaks with nautical schemes and develops into a more relaxed setting for enhanced sociability. Large windows flood the spaces with light.

The finely crafted furnishings each have a unique history. The loose furniture created by Achille Salvagni becomes an artistic element: each object is designed to give energy to the space that is sculpted and unfilled. Everywhere rounded, beveled, sinuous forms reflect the fluidity and sinuousness of the design characterizing the spaces on board. Few decorations in favor of clean lines, with minimalism corresponding to refinement. 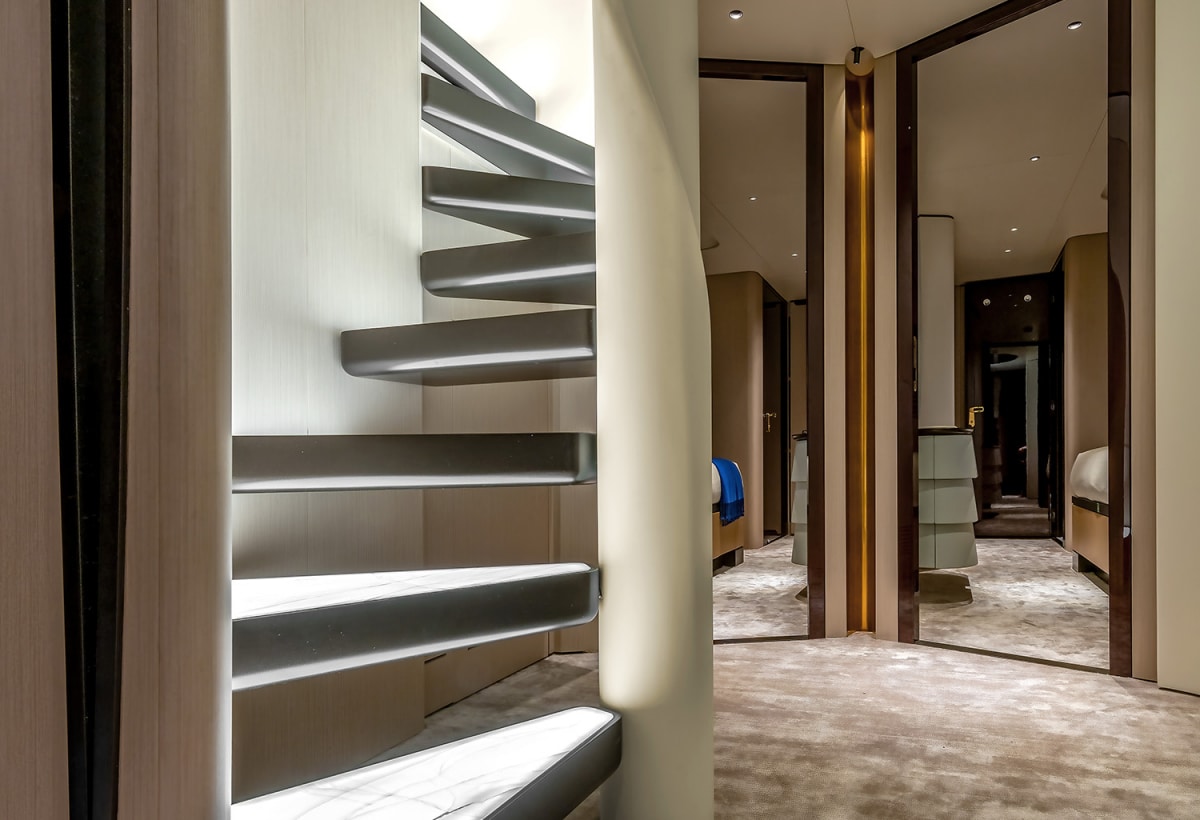 Not.O is born: design made in Sicily

Samsung, journey into the house of the future