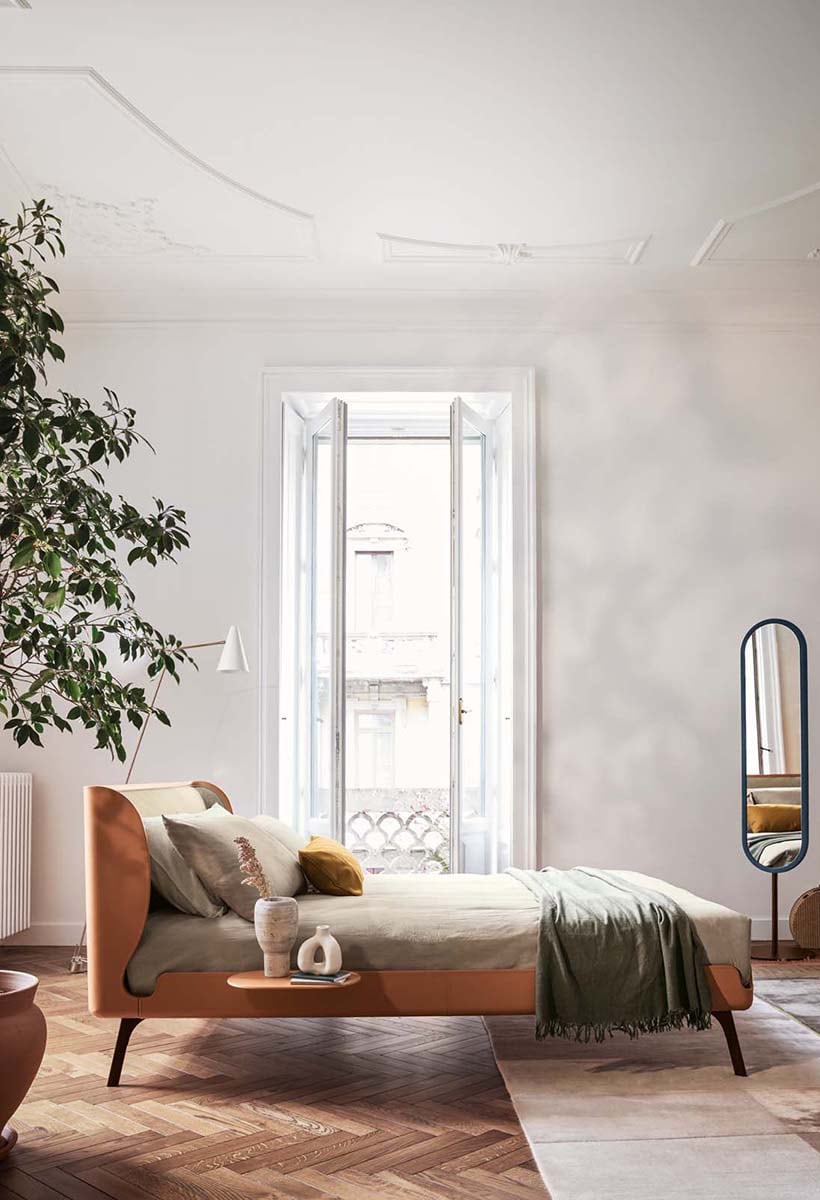 Gabri by Bolzan, designed by Matteo Zorzenoni, stands out for its elegant side grooves where you can put your hands in to spread out sheets and blankets

Design, as we know, is a matter of details, points of view and visions of the world hidden (also) in the curves of a piece of furniture. Stories of houses, of families. Of women and men who dispense advice. Like Gabri, nickname of Maria and mother of Matteo Zorzenoni. The woman who, when her designer son showed her the sketches of her creations, spoke first of all about their usefulness. Because, she said, the function of the form is more important than a piece of furniture. For this reason, now, the bed that Zorzenoni signs for Bolzan is called Gabri.

The detail that makes the difference

A piece of furniture in which the detail makes the difference: in this case, the special grooves formed along the lateral lines of the bed frame that are used to easily sink your hands under the mattress when it is time to spread the sheets and blankets. A detail that Gabri-Maria would have liked very much, and reveals that attention to the practicality of things that is characteristic of good design. 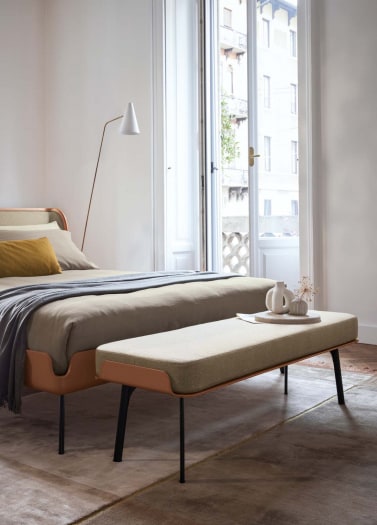 But Gabri is also a masterful example of the typically Italian encounter between design and manufacturing, a piece of furniture that enhances the artisan vocation of Bolzan, a company that has made the centrality of the upholstery, from fabric to leather, the distinctive note of its history and of its catalog. Classic in materials and finishes, contemporary in lines, Gabri is also the first bed designed by Zorzenoni for the Venetian company. Characterized by a finely crafted leather shell with attention to the smallest details, it is a light and enveloping bed, with compact dimensions that make it perfect for environments of different sizes, styles and nature, both classic and contemporary. 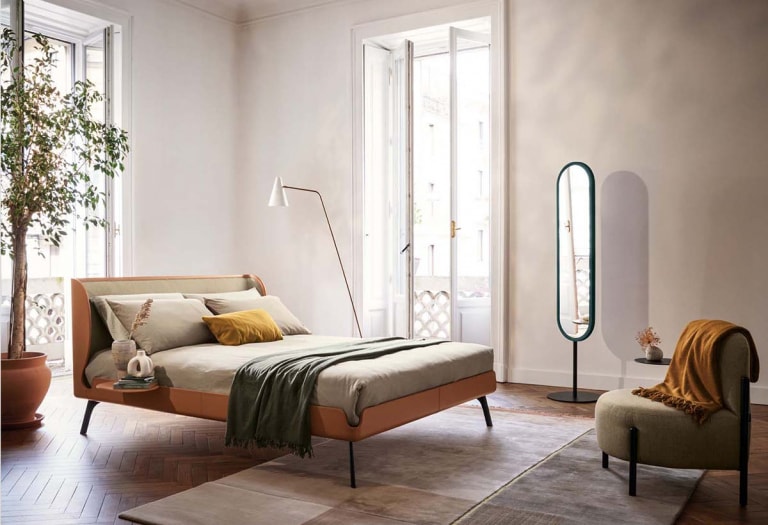 The mattress is incorporated in the fluid lines that run along the entire perimeter of the bed. The soft lines of the curves are echoed in the headboard with an organic and soft shape, designed to evoke the idea of an enveloping embrace. 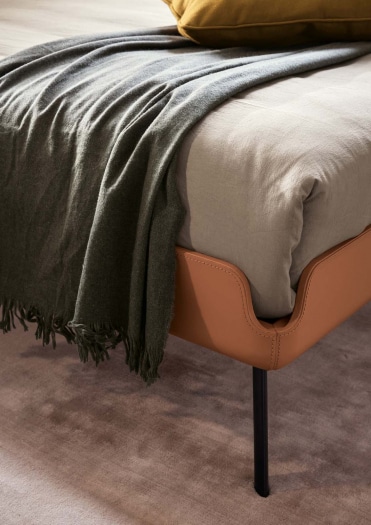 Gabri - explains Zorzenoni - was designed as a tailored suit, from the choice of a noble material such as leather to the attention to stitching and details. "The goal - says the designer - was to interpret Bolzan's know-how and history, his roots in that particular, all-Italian world, where craftsmanship and industry meet to give life to furniture with a strong manufacturing imprint. We also wanted to add a new chapter of contemporary design to the history of a company that has focused on fabric for its catalog from its birth. " 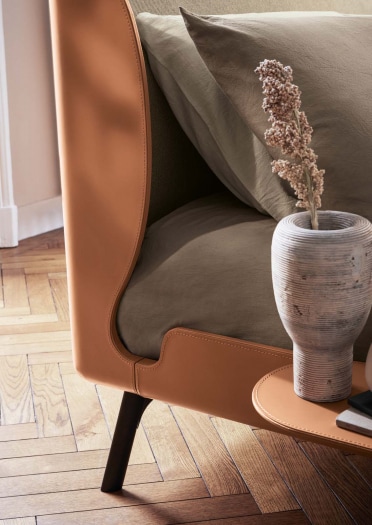 Together with the bed, an accessory shelf is available, also in leather, to be easily attached to the bed frame and designed to accommodate those small objects - books, glasses, the alarm clock ... - that accompany us to sleep. 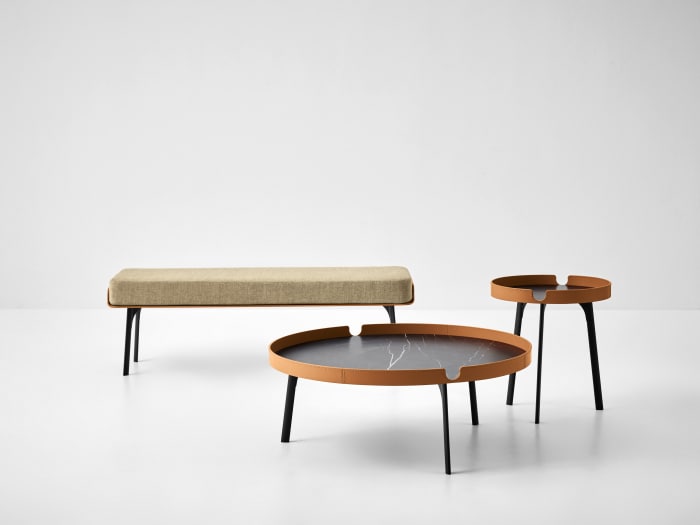 A bench and a coffee table

The family is completed by a bench and a round table available in two sizes. The latter, inspired by a fluid idea of the house, is designed as furniture that is also valid for the living area. Its design reflects that of the bed, of which it incorporates the two grooves that open along the circumference in saddle leather, while the top is available in Neolith sintered stone, a natural material obtained with a sophisticated technological compaction process. The bench, with its soft padded seat, is covered with the same fabric as the headboard, in a refined play of references.

Ceccotti Collections between innovation and tributes to the masters of design