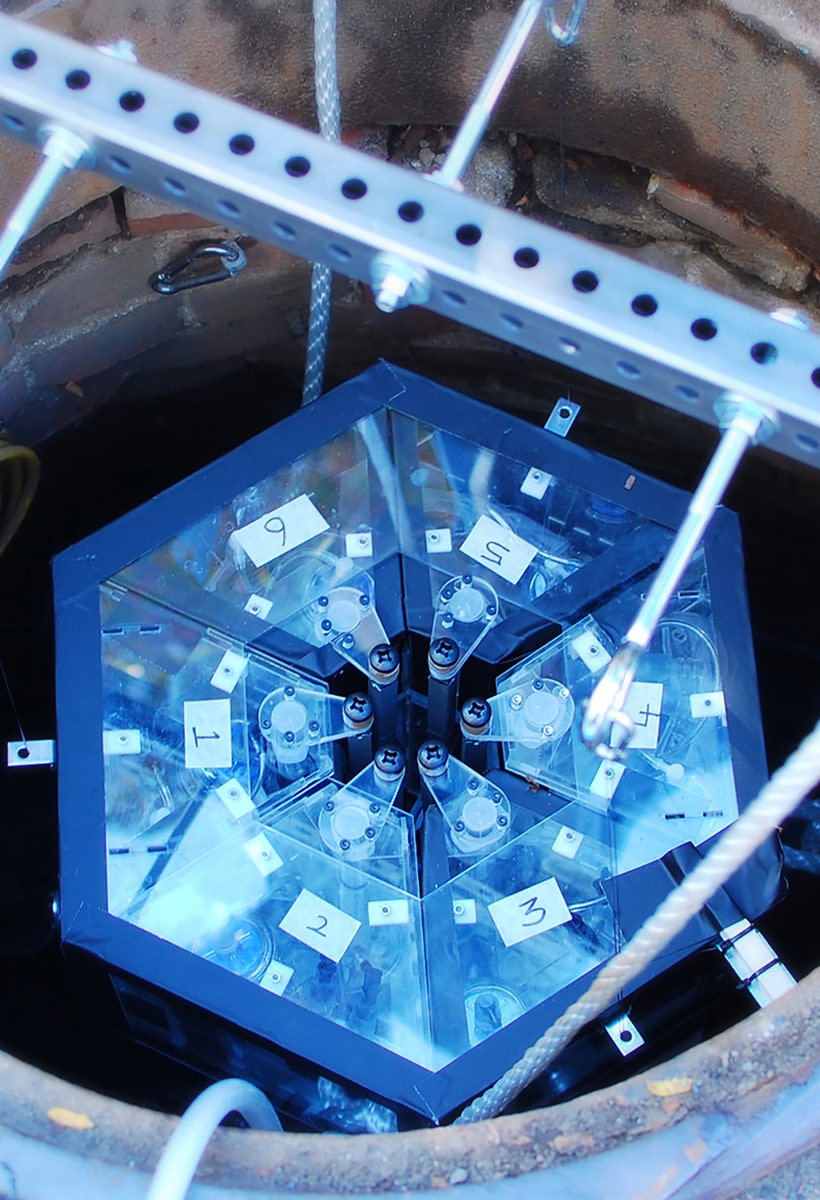 #design
From smart to safe cities

Health, safety and distancing are the guiding terms of the design of a refunctionalized city, where the virtual will play a fundamental role in the design of new relational rules, the management of time-shared spaces or of information on community health. The views of Philipp Rode and Carlo Ratti on technologies and public space

The meaning of public space and relations among individuals have been disrupted by the epidemic. Life in Phase 2, amidst the need to restart and the need for social distancing, opens a new period of design to respond not only to demands for safety to stop the spread of Covid-19, but also – more in general – for already existing political agendas, correlated to a great extent with the health crisis: public wellbeing, climate change, transformation of global economic models. The virus has not altered the priorities, but it has accelerated the need for intervention.

The plagues of the 17th century, which led to the closure of open sewers and indicated the need for larger, ventilated public spaces; or tuberculosis in the 1920s, which sped up modernization in the design of more rational, clean buildings. These are just some examples of what epidemics can do to induce permanent changes in public space. Regarding the relationship between epidemics and urban planning, Sara Jensen Carr, a researcher at the School of Architecture of Northeastern University in Boston, is about to publish the book The Topography of Wellness: How health and disease formed the American urban landscape, 1840-present. It is too soon to say what will be the effects of Covid-19, but the health emergency has definitely raised awareness of the role of the digital and its mechanisms of relation with physical life, shifting the question of the smart city to that of the safe city. 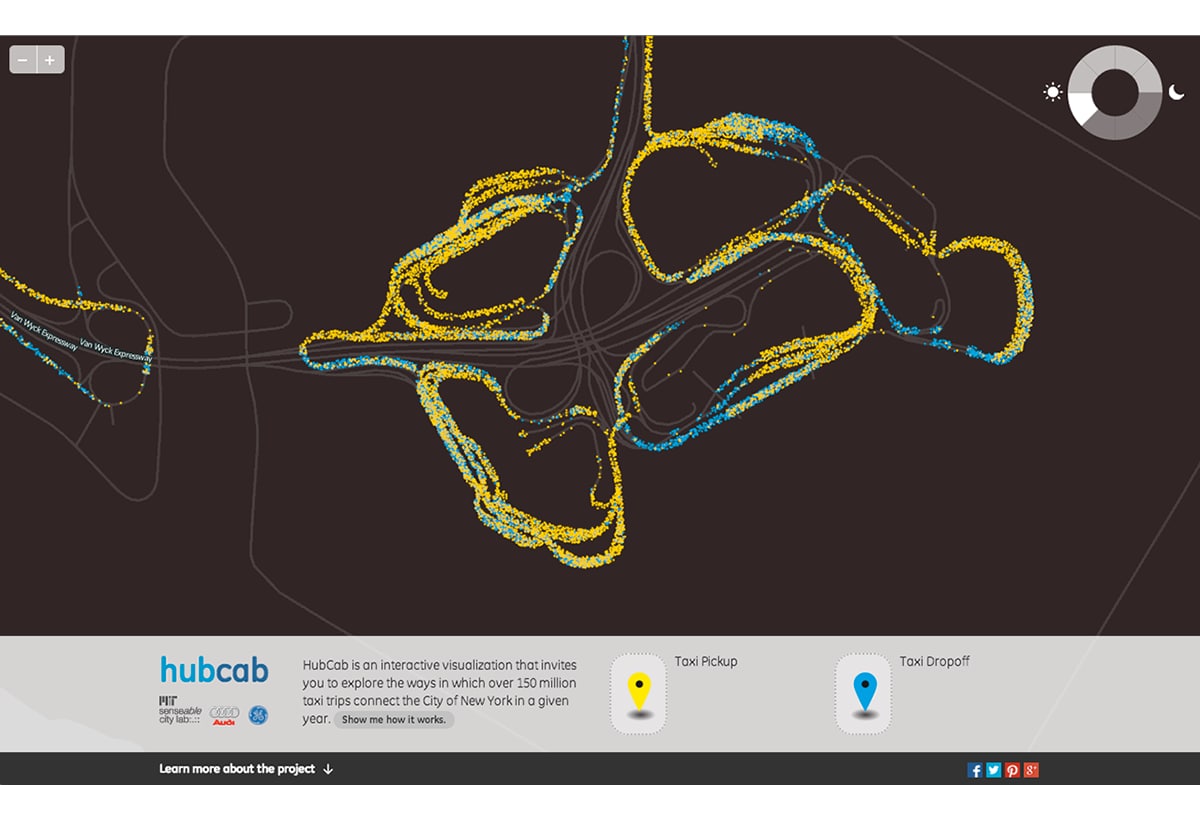 6
The HubCab project, created by MIT Senseable City Lab in partnership with Audi and GE, has visualized about 150 million taxi rides in New York during one year, to hypothesize sharing economy scenarios linked to mobility.

Priorities like the protection of people in the workplace, fixed-quota numbers and smart working, or the relationship between flows of people and individual vehicle traffic, point the way to a refunctionalized city that avoids the concentration in a few urban areas of activities like education, commerce, healthcare and territorial welfare, instead encouraging their distribution in the various neighborhoods. It is the model of the so-called ‘15-minute city’ promoted by Anne Hidalgo, mayor of Paris, inspiring other cities that are focusing on sustainable, short-range mobility – Milan, Barcelona and London, for example.

“If services and professions of primary importance are redistributed in a more efficient way,” says Philipp Rode, associate professor and executive director of the program Emergency Government for Cities at the London School of Economics (LSE), “it is possible to recalibrate the dualism between center and outskirts. This also improves the general conditions of the neighborhoods most at risk: during the lockdown in London assistance services were provided for the homeless or the poorest people, pointing the way to a safer, more inclusive city. But what is needed is the combined action of public policies on urban transports and workplaces, just to mention two areas.

Greater decentralization of labor and incentives for smart working – in these months we have implemented a surprising exercise of reorganization of remote work, on which we can now capitalize – can reduce commuting and suggest more flexible hours, avoiding rush hours and indicating new ‘smart’ environments as shared spaces, accessed on the basis of time sharing. This would have an effect on the public transport system, whose use has to be encouraged, but only if there are reliable safety measures – from devices of individual protection to apps to prevent crowding, temperature detectors, automatic sanitizing systems. The redistribution of short-range services and a system of pedestrian walkways, bicycle paths and electric collective transport with assisted driving can offer an alternative to the massive, unsustainable return of the automobile.”

“
Design has to start over from analysis of functions and complementary services, focusing on an offering of differentiated experiences, which also includes the definition of ‘decompression zones’ between physical spaces and functions, where people can spend recreational time without the risk of crowding in a single location."

Technology seems to play a key role in safety and the use of shared spaces. “Its contribution,” Rode continues, “in the management of public spaces could help to resolve things. For example, in a situation of social distancing, people could reserve time slots, rethinking the space on the basis of time of use. New hypotheses are needed, which can correspond to design solutions that combine physical and virtual presences, in public venues, for example. Towards a new idea of coexistence in a situation of safety.”

The architecture firm Progetto CMR has been part of the design task force put together by DesignTech Hub, whose results are summed up in the recent white paper DesignTech for Future. Regarding public space, Progetto CMR, heading the work table on this topic, adds that design has to start over from analysis of functions and complementary services, focusing on an offering of differentiated experiences, which also includes the definition of ‘decompression zones’ between physical spaces and functions, where people can spend recreational time without the risk of crowding in a single location. 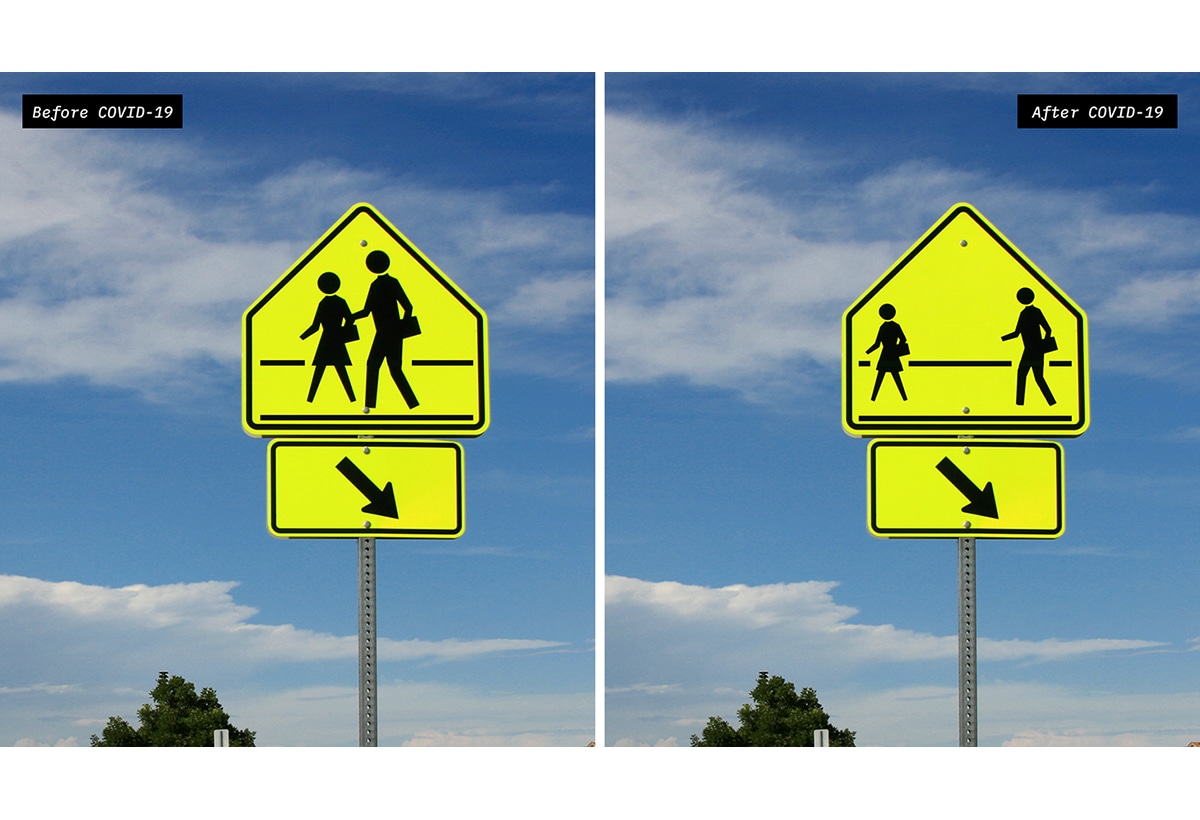 5
The designer Dylan Coonrad of the New York-based studio Cannon Design has revised the most common street signage in terms of social distancing.

“
Priorities like the protection of people in the workplace, fixed-quota numbers and smart working, or the relationship between flows of people and individual vehicle traffic, point the way to a refunctionalized city that avoids the concentration in a few urban areas of activities."

“I believe that over the short term,” says Carlo Ratti, founder of Carlo Ratti Associati and director of the MIT Senseable City Lab in Boston, “we will still have to accept the compromise of reduced use of public space, at least until the creation of a vaccine. Nevertheless, as Aristotle said, ‘man is by nature a social animal.’ It is a characteristic that prompts us to live together in the city, an instinct that has survived calamities and pandemics much more devastating than Covid-19. Halfway through the 1300s, the plague eliminated 60% of the population of Venice. The Serenissima responded not by changing its ‘hardware’ but its ‘software’: it opened to migrants, offering citizenship to those who moved to the city. The changes in our cities after this health crisis will have to do with the digital sphere, more than with the physical sphere.”

Since MIT Senseable City Lab was among the first, in 2004, to publish a study on the use of data from mobile phones to describe urban dynamics, we asked Ratti his opinion on technologies of tracing of personal data for the purposes of healthcare. “In general, I am not in favor of such systems. Nevertheless, our laboratory has shown that it is possible, while respecting the rules of the European GDPR, to extract personal information from Google to obtain a vast amount of data on location. With respect to the role of Google and Apple, we have to remember that these large companies, for better or worse, in any case gather enormous quantities of data every day. In this moment of health emergency, we have the possibility of using this database in a useful way, putting it at the service of a public need. But we have to be certain that the phase of emergency will have a precise date of conclusion. In the present phase we can imagine developing data collection systems that help us to have a clearer view of health conditions, not only of people but also of the city as a whole. For example, with our lab at MIT we have worked on the Underworlds project, to measure the microbiome of a neighborhood, starting with monitoring of sewage water. We then transferred this experience in to the start-up Biobot, which monitors sewers in various cities in the United States to gather information on the spread of Covid-19.”

Always and forever, beauty according to Edra