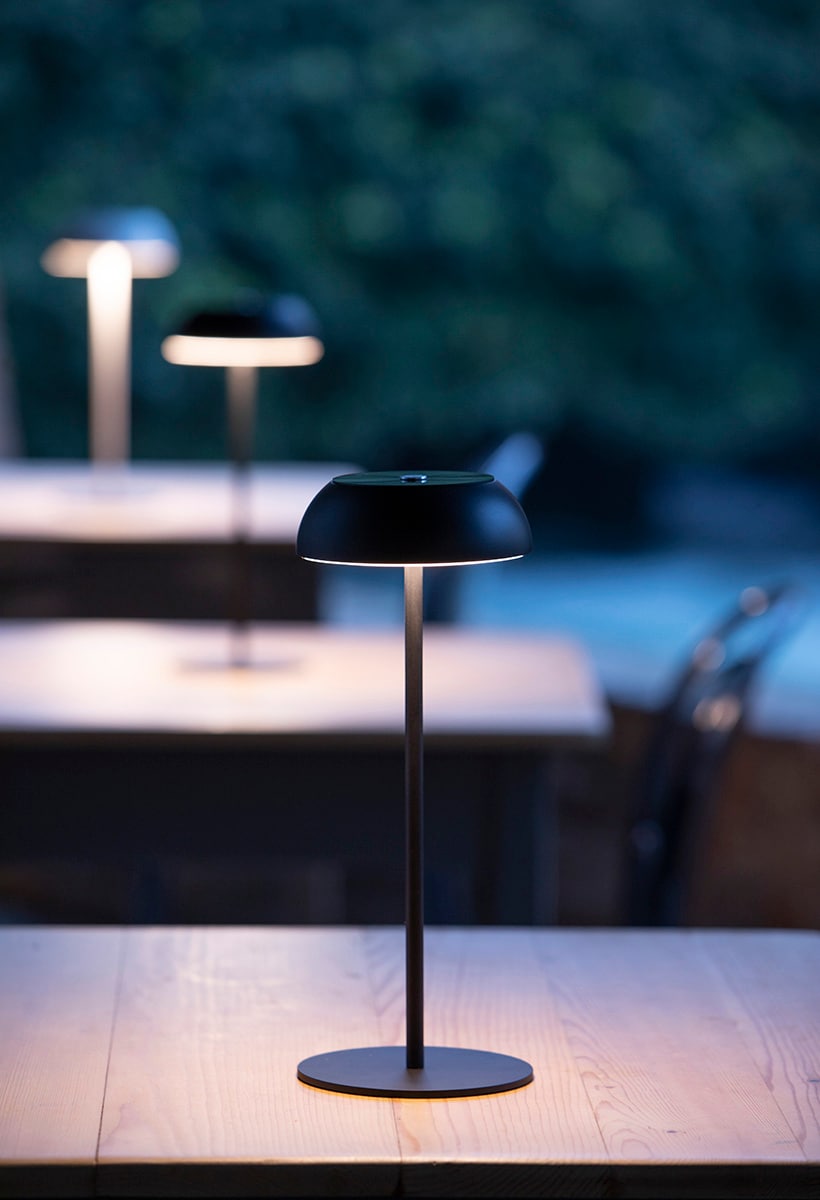 #lighting
Axolight
Float by Mario Alessiani for Axolight is a functionally versatile and portable lamp for indoors and outdoors, for the hospitality sector and the home, from the living room to the garden

The Float lamp designed for Axolight, says Mario Alessiani, is “a functional emotion”: emotion by its discreet and evocative light, and functional by its versatility, thanks to the multiple versions available. It comes in five colors (white, black, blue, cement, mauve powder) and is produced in five variants: table, floor, suspended, wall-mounted and even a table version that enables it to be stood freely on an object, a bottle for instance, thanks to a central hole closed in the top. Just like the beach inflatables for children from which it drew its inspiration, Float really seems to float on its very slender metal stem or on objects chosen as a support. In technical terms, Float is portable thanks to a 9-hour battery that recharges in 4 hours with a normal USB charger, without using the bases, which enable you to stack different lamp bodies each on the other (also ideal in confined spaces). And after 500 charging cycles, just change the battery. Features that make it suitable not only for home use, but also for hospitality venues such as restaurants or resorts.

What is it?
Float is a functionally versatile portable lamp, for indoors and outdoors, for the world of hospitality and for the home, from the living room to the garden.
What is the design concept?
It is inspired by children’s beach inflatables, from which it takes the name “Float”, and makes for different interpretations: it can be positioned on an object (a bottle, for instance) and is available in table, floor, suspension and wall-mounted versions.
How is it produced and with what materials?
Float is mainly made of metals: aluminum and steel. Depending on the model, it comes equipped with 36 cm and 120 cm pedestals, or cables for ceiling and wall installation. It has a soft touch system for switching on and adjusting the beam, greater than 200 lm. The available temperatures are 2700 k and 3000 k. It comes in five colors: white, black, blue, cement and mauve powder.
How is it produced and where?
Float is handmade in Italy: over 80% of the supplies are from the Veneto region, and the production process is mainly notable for precision craftsmanship and manual assembly conducted in the Axolight facility at Scorzè, Venice.
What makes it special?
Float’s main competitive differential is functional versatility. It is a designer lamp, made in Italy, portable, for indoor and outdoor use, safe space in the charging phase, and with a technically advanced battery: it has a duration of 9 hours, recharges in 4 hours with a normal USB charger, lasts for 500 charging cycles and is exchangeable at the end of the cycle.
What is it like?
Pop, empathetic, contemporary.
In the designer's own words
“With Float we focused on style and rationality to succeed in creating a functional emotion. We built our own Float, like the ones children play with in the water, which keep them afloat and create happy feelings.”
#Design #Furniture #Illuminazione #lighting