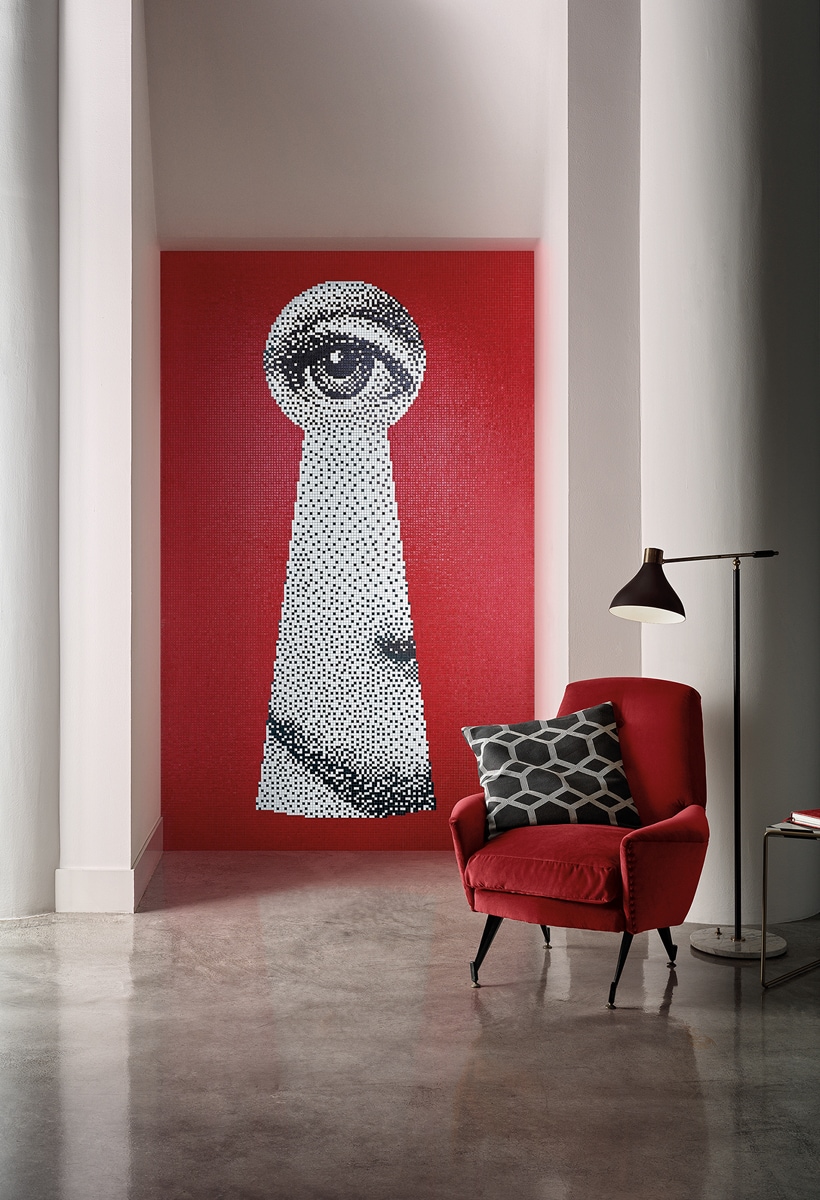 Fornasetti collection, the new mosaic series stemming from the encounter between two excellences of Italian design: Fornasetti and Bisazza

A long and painstaking partnership between the Fornasetti and Bisazza workshops have led to the creation of the new Fornasetti Collection, consisting of four mosaic patterns. The uniqueness of Fornasetti's creative line has been restored, interpreted and enhanced by the brilliance and transparency of Bisazza glass mosaic tiles. For the first time in large formats, the patterns Ortensia, Bocca, Serratura and Soli a Capri energetically enter the living space, transforming it into a unique setting with a powerful personality. The Bisazza mosaic patterns reproduce some of the most iconic figures in the Fornasetti universe: the mouth, the mesmerizing gaze portrayed behind a keyhole, the enigmatic and refined face of Piero Fornasetti's muse, the singer Lina Cavalieri who, in the Ortensia pattern seems to emerge timidly from an explosion of pink and blue petals. Then there is the sun, another prominent figure in the collection, which in the Soli a Capri pattern, a set of radiant suns, ironically portrays Piero Fornasetti’s own face illuminating a ground in shades of blue or grey.

What is it?
The Bisazza mosaic patterns that make up the Fornasetti Collection are decorative conceptions well suited to any setting, whether public spaces or private. The collection has been designed for fastidious and refined customers who wish to make their spaces unique thanks to the refined decoration with a notable cultural value.
What is the design concept?
The magic, humor, metaphors, allusiveness and richness of Fornasetti's compositions are perfectly interpreted in the new Bisazza mosaic decorations, expressions of that fusion between art, design and luxury that has always distinguished the style, mastery and creative skills of the two Italian brands
How is it made?
In these patterns, the uniqueness of Fornasetti’s line is preserved and enhanced both by the brilliance and transparency of the glass mosaic tiles and by the refined combinations of sixty shades of color.
How is it produced and where?
The collection is produced by Bisazza in Italy.
How is it manufactured?
The outstanding artistic expression of the series is achieved by the excellent skill and precision of Bisazza’s craft workers, who lay the individual tiles by hand following the outlines of Fornasetti’s style.
What makes it special?
I pattern di questa collezione sono deThe patterns of this collection are timeless, acquiring a strong cultural value through the similarity between the identity of the two brands, both of which have always been renowned for their collections with a high hand-crafted and artistic content. Then the four patterns in the collection are broken down and recomposed to experiment with new surfaces, large proportions and original reflexes of light.lle proposte senza tempo, che acquisiscono un forte valore culturale grazie all’identità affine dei due brand, entrambi da sempre noti per le loro collezioni dall’alto contenuto artigianale e artistico. I quattro disegni della collezione, inoltre, sono scomposti e ricomposti per sperimentare nuove superfici, ampie proporzioni e inediti riflessi di luce.
How is it?
Contemporary, artistic, design.
In the designer’s own words
“I have guided Fornasetti to experiment widely over the years, exploring new sectors, new surfaces, taking the atelier even beyond the narrow confines of design. This first collaboration with Bisazza embodies a desire and a respect that have long existed. Our dialogue and joint study have given rise to a collection that is more than the simple sum of our unique features. The graphic handling and glowing line that characterize Fornasetti's aesthetic acquire greater brightness and the patterns experience unprecedented accents of light."
#Design #Furniture