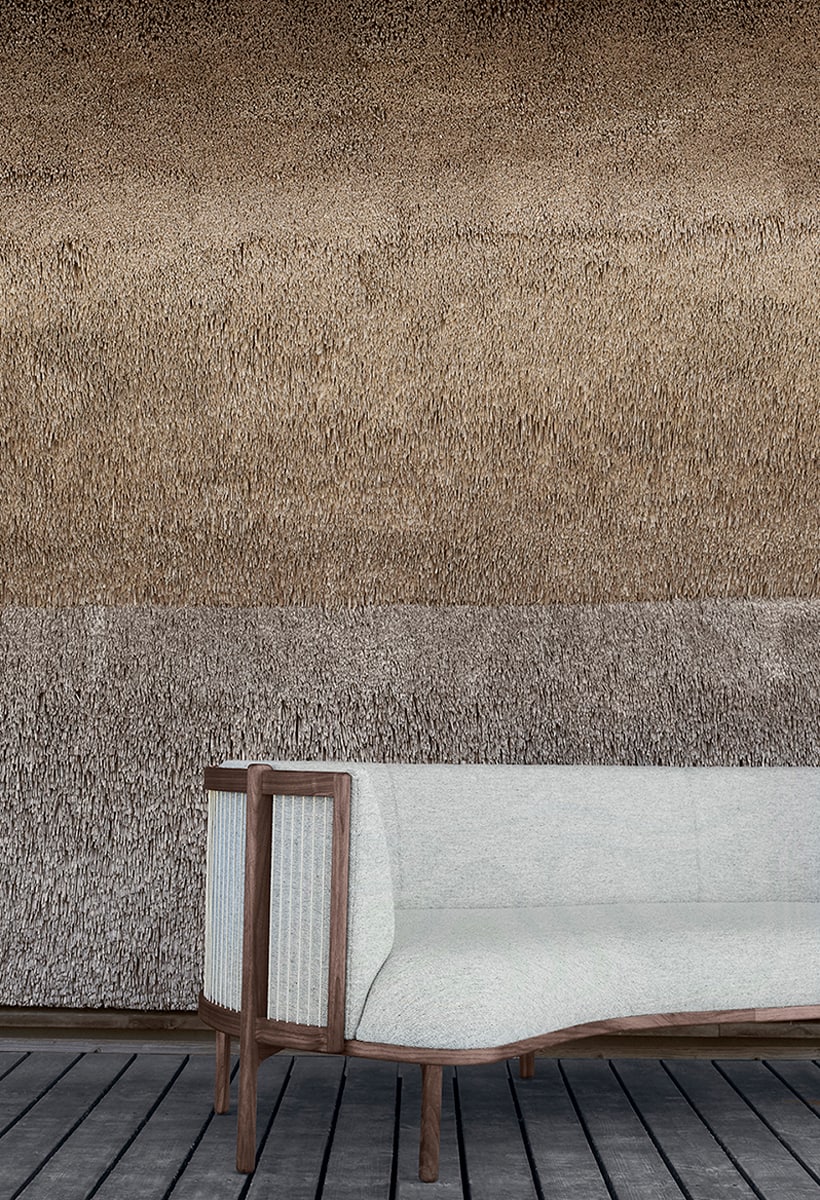 In Sideways, the steam-bent back  and organic form create two facing seats that encourage interpersonal communication, which today is increasingly in crisis.  The choice of wood, paper cord (fashioned using traditional Danish craft techniques from the mid-20th century) and cotton fabric, together with its design with rounded and asymmetric lines, make  Sideways a contemporary product.  The origin of the project is unusual. Rikke Frost created the prototype of the sofa in just three weeks while taking part in Danmarks Radio’s TV program Denmark's Next Classic, in which  Sideways was ranked first in its class.  Its detailing and craft qualities were then perfected to fuse form and function and create a pleasingly refined sofa.

What is it?
A sofa that offers a versatile experience of comfort with different seating modes. It encourages conversation, but also relaxation. It can provide a social focus and at the same time a personal refuge. It is perfect for home and private interiors or contract and hotel settings.
What is the design concept?
The Sideways sofa grew out of Rikke Frost’s desire to create furniture capable of encouraging people to talk to each other while also adapting to the Danish design scene. Using this approach, she combined classic materials with a refined form, the techniques of craft tradition with the principles of the modern Danish movement.
How is it made?
The structure and back are made from solid oak or walnut wood and woven paper cord. The seat and back are upholstered in fabric to ensure optimal comfort as well as a light and elegant appearance. The fabric can be made from different materials as desired.
How is it produced and where?
Like all the brand’s furnishings, this sofa is produced at Gelsted, on the small Danish island of Funen, where Carl Hansen & Søn have their headquarters and the workshops. Here the craft workers use traditional techniques and new technologies to create contemporary yet timeless furnishings.
How is it fashioned?
Every piece made by Carl Hansen & Søn is handcrafted to each customer’s individual request. Hence craft skills provide the essential know-how also in the creation of this sofa: from the techniques used in weaving the wicker pattern of the paper cord to the careful selection of materials.
What makes it special?
Rikke Frost has succeeded in reinterpreting the classic design of the sofa using an asymmetric form and creating a furnishing that encourages people to relate to each other. The aesthetic in strictly Nordic style combined with the soft and inviting lines make it a piece of furniture that fits naturally into any type of setting.
What is it like?
Convivial, Scandinavian, functional.
In the designer’s own words
“In everyday life communication is being diminished by digital equipment, so I decided to design a sofa that would encourage people to converse more naturally. I look forward to seeing my sofa become part of Carl Hansen & Søn’s prestigious collection. The Danish brand is renowned for the production of high quality furniture. It makes me feel immensely happy and proud that my designs are being added to their collections styled by famous designers.”
#Design #Furniture