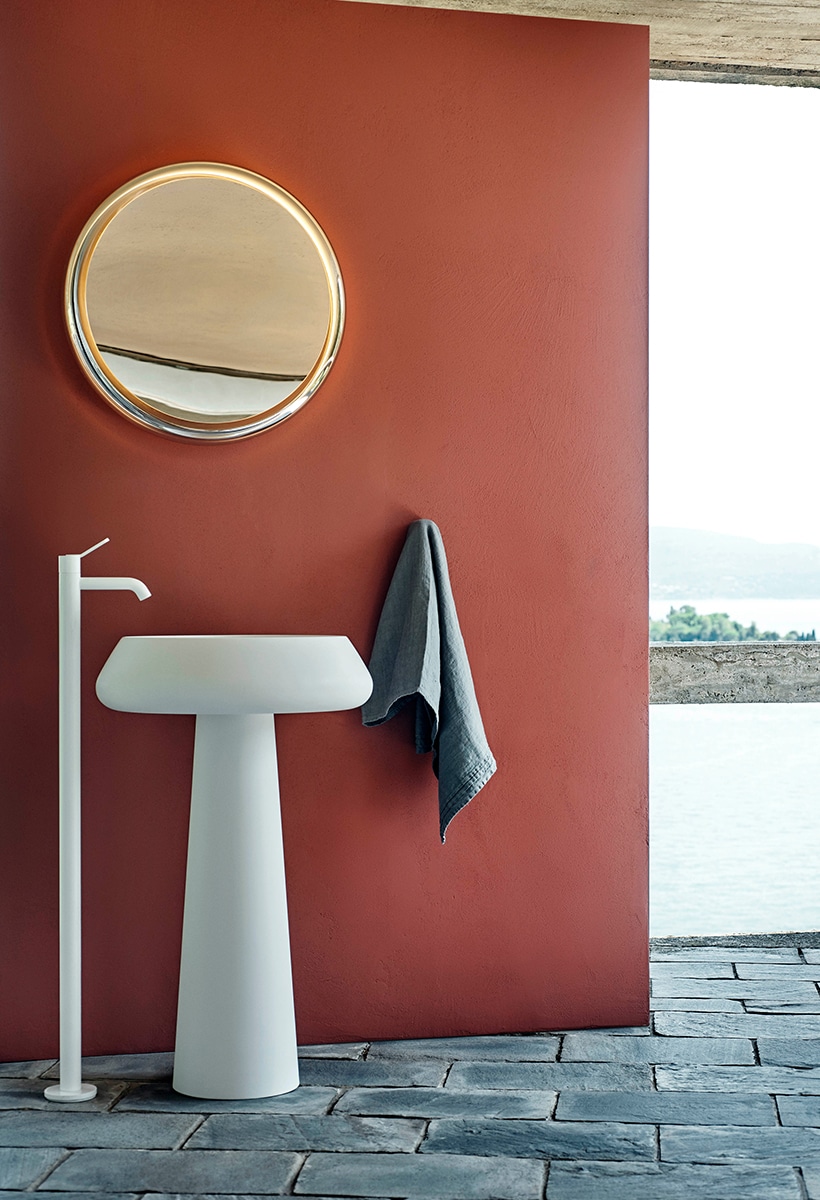 With an unmistakable design, born from the inspiration by Angelo Mangiarotti, Bjhon is a freestanding and countertop washbasin in marble, stone, concrete or biobased Cristalplant

Bjhon by Agape was born in the early 70s from an idea by Angelo Mangiarotti and has been an inexhaustible source of inspiration ever since. In those years, the master's attention was focused on elements that recall the mushroom shape in various respects. The result is a collection of planters which, thanks to their height from the ground, lift plants and flowers allowing them to be taken care of easily. A simple object and, in the best Mangiarottian tradition, made up of independent parts: a truncated conical support and two basins of different shapes that are grafted onto the column. The project tells the fascinating story of Angelo Mangiarotti's ability to go beyond the simple shape of an object, assuming different uses over time. In the 2000s, reflecting with Agape on the collection of Lito marble washbasins, the mind returns to that planter that brings the user closer to the plant, a gesture similar to the daily approach to a basin to wash his hands and face. This is how Bjhon was born, a freestanding and countertop washbasin, initially made of the material most dear to Mangiarotti, marble, and later in the variants in biobased Cristalplant and, more recently, in Petit Granit and Cementoskin that allow it to be used also in outdoor environments.

What is it?
It is a family of freestanding and countertop washbasins for indoors and outdoors, which offers great design versatility. Its large and deep basin and the slight detachment from the support surface make these washbasins with a careful geometry extremely functional.
What is its design concept?
The project gives shape to an idea by Angelo Mangiarotti from 1970. The decomposition of the washbasin into two pieces, a column support and two basins of different shapes (Bjhon 1 and Bjhon 2), expand the possibilities of use. A mushroom-shaped sculptural object that, in the column version, brings up a volume of evident dimensions through a thin base.
How is it made?
It is made up of two independent parts: a truncated conical support which contains the central drain and which can support two different forms of basin. The washbasins are available in biobased Cristalplant and marble for indoor use and in Petit Granit and Cementoskin for outdoor spaces.
How is it produced?
Versatility in use and flexibility in production processes: the geometric properties of the Bjhon family allow it to be created with different production technologies while keeping all the details of the washbasin unaltered. The versions in Cristalplant and Cementoskin are made in the mold (respectively by injection and pouring), while the stone versions are made from solid by turning the material.
How is it special?
Each version, regardless of the production process, is subjected to a series of meticulous manual processes to give the washbasin its final appearance in the details and in the particular surface finish that is velvety to the touch.
How is it?
Sculptural, original, versatile.
In the designer's words...
"Happiness comes from fairness".
#Furniture #Design #Bathroom