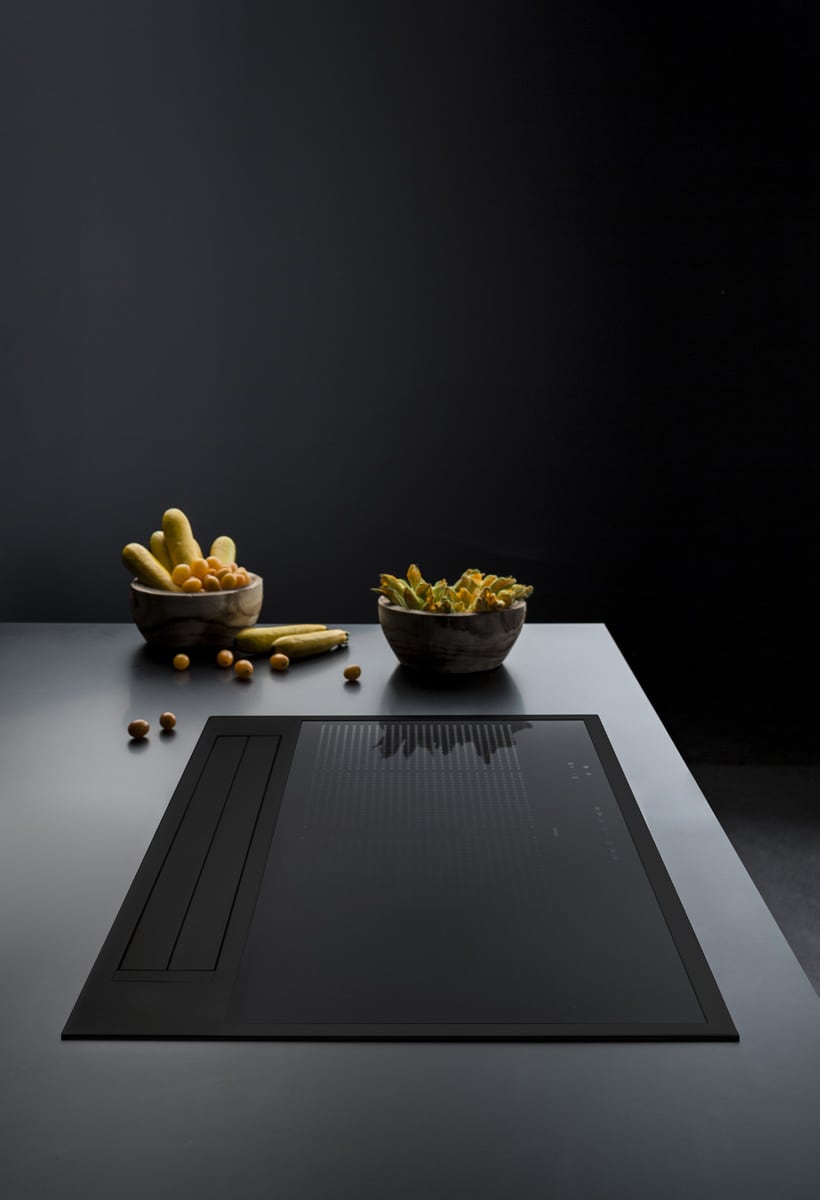 Sintesi Black by Falmec: an integrated cooking system that combines the extraction and cooking elements.

Sintesi Black by Falmec is an integrated cooking system that combines an extractor unit with an 88 cm panoramic induction hob. The extractor unit is equipped with flaps that open when the hood is in operation, then close automatically during the shutdown phase and so becomes realigned with the surface.Thanks to the perimeter frame that unites the extraction and cooking elements, installation of the product is simple, since it eliminates the need to adapt the hob or use sealants for flush fitting.The induction surface of Sintesi Black comprises four zones with nine cooking levels, High Power Boost and Flex Surface technology, which enables the induction to act uniformly on each zone, connecting them when needed and so offering maximum versatility in the use of pans of various sizes. The cooking area is equipped with a pan detection sensor, timer, safety lock and residual heat indicators.The extraction function is supported by a motor with a flow rate of 600 m3/h which, combined with special sound-absorbing materials, enables the hood to achieve remarkable operating performance, extreme silence and maximum efficiency (it is in energy class A++). As a filtering function, Sintesi Black can also count on exclusive Carbon.Zeo filtering technology that, thanks to the combined use of zeolite and activated carbon, makes for excellent reduction of odors and humidity of the vapors released by cooking.

What is it?
Sintesi Black is an integrated cooking system that combines an extractor unit with an 88 cm panoramic induction hob.
What is the design concept?
The project embodies the company’s experience and know-how in the field of extraction and cooking technology.The innovation lies both in the linearity of the product and in having inserted the extractor unit at the rear, freeing the cooking area from all obstacles.
What is it made of?
It consists of a Schott black ceramic glass top with an AISI 304 steel perimeter frame in scratch-resistant matt black finish.
How it is produced and where?
It is produced by a multi-phase process carried out, from design to the final product, in the company’s Vittorio Veneto facility in the province of Treviso. The production combines automated industrial processes with manual processes.
What makes it special?
The horizontal development of cooking with a rear-mounted extractor unit makes all cooking activities easier. In aesthetic terms, the total black version ensures chromatic uniformity guaranteed by a special treatment in the steel part with an anti-scratch matt black finish.
What is it like?
Effective, silent, minimal.
#Design #Furniture #cucina #Kitchen