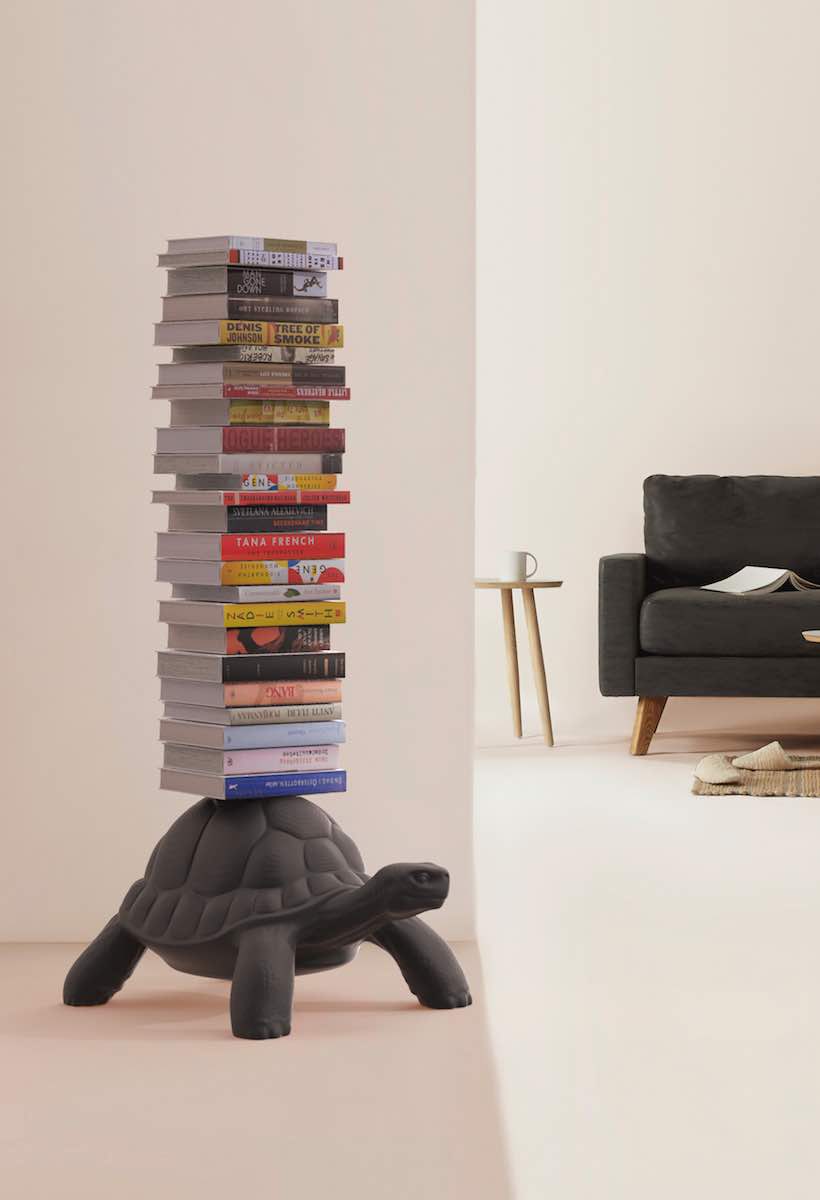 #design
Qeeboo
Turtle Carry by Marcantonio for Qeeboo. The world of nature, played through a surreal, sophisticated and ironic filter

Qeeboo’s fanciful zoo is enriched with another magical character designed by Marcantonio. After the success of “Giraffe in love”, now it is the turn of Turtle Carry, a charming multipurpose turtle. A new Pop transformational object, it skillfully interprets the playful approach to design by this “next generation brand” founded by Stefano Giovannoni.

Once again the designer had drawn inspiration from the natural world, reinterpreted through a surreal, sophisticated and ironic vision. “The turtle is a symbolic creature, one that has a special place in artistic imagery. It supports obelisks, sculptures... or other creatures on its shell, as in

children's tales,” explains Marcantonio. Hence the idea of ​​interpreting it as the support for a range of functions. “If you put a cushion on the shell, it turns into a pouf, or if you put the right kind of structure on it the turtle can become a bookcase, just as it can become a table or a plant pot.” The project consists structurally of a zoomorphic body in polyethylene produced by roto molding and incorporating a socket that allows various accessories to be attached to it, including the bookcase column in folded and welded sheet metal.

Turtle Carry enters Qeeboo's fantastic bestiary, which is the home of friendly presences (gorillas, giraffes, bunnies, sharks), emotional objects that interact with our imagination. The designer concludes: “I love fantasizing that the turtle is not really an inanimate object, that it just might very slowly start moving off and carrying the objects away from us.”

What is it?
Turtle Carry is a family of products that has its base in a turtle that can carry, variously, a bookcase, a coffee table, a pouf or a flower pot. It is aimed at a public that loves ironic and emotional design.
What is the design concept?
Turtle Carry is a charming multipurpose turtle. Its shell forms the support for a series of furnishing complements that can be easily attached to the shell.
How is it made?
The product consists of a central body in polyethylene with an internal rail guide that enables the turtle to serve as the interface for mounting various types of products on its shell.
How is it produced and where?
The central body of Turtle Carry is roto molded by an Italian company. The bookcase, in folded and welded sheet metal, is made in Italy.
How is it manufactured?
Fabrication of an industrial kind is required to make Turtle Carry.
What makes it special?
Qeeboo products stem from a unique idea that playfully innovates the imagery of traditional types of objects.
What is it like?
Emotional, ironic, magical.
#Design #Furniture #arredo