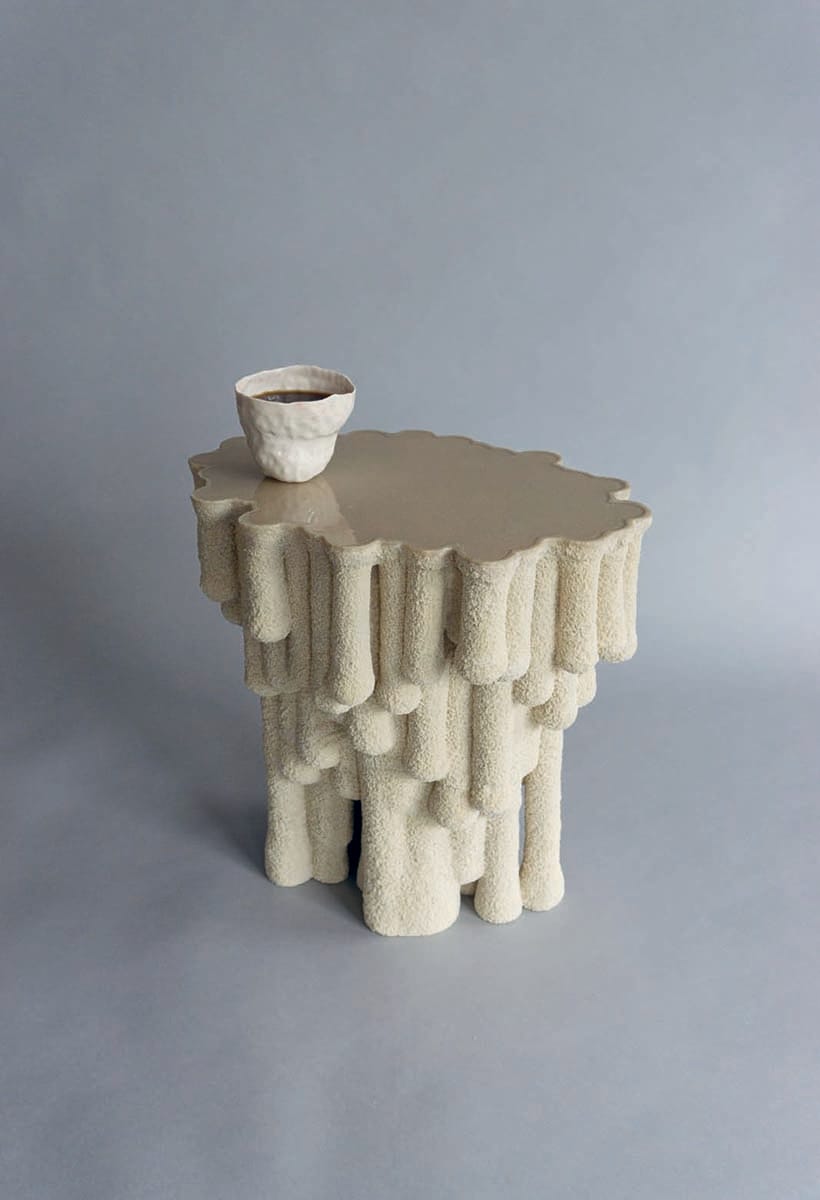 Nature as an artifice

Nature as an artifice

With the start of the third decade a new narrative opens in design, in which the evolution of product aesthetics continues along the fundamental lines of the recent past, merged and recombined as a result of the discontinuity triggered by the pandemic

Second Nature is a collection of indoor and outdoor furnishings made with plastic taken from the sea, recycled and 3D printed using robot technology. The project, carried out by The New Raw in collaboration with BlueCycle (winner of the first prize for the category Industrial Design in the Guiltlessplastic 2020 contest organized by Rossana Orlandi), offers an exemplary summary of the freshest energies of contemporary design. The theme of sustainability meets that of digital technologies, utilized to shape the ‘raw material’ extracted from a natural fund in which human action has penetrated to the point of entering the food chain. 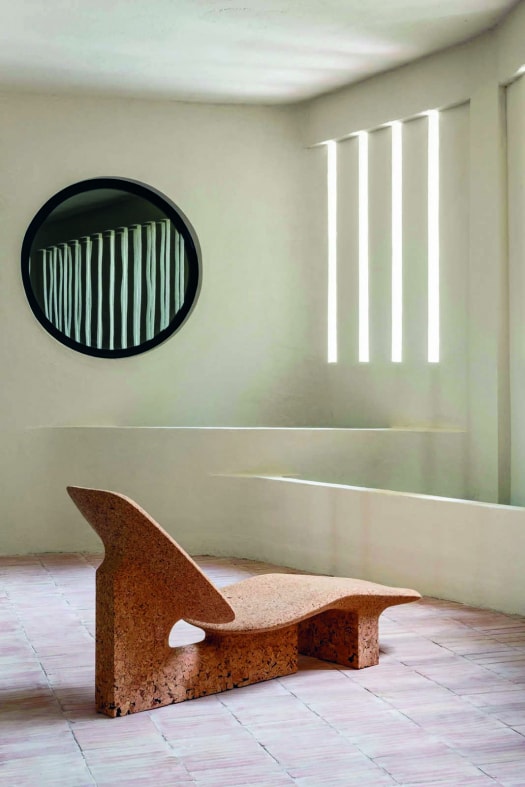 The chaise longue from the Burnt Cork collection by Noé Duchaufour-Lawrance combines raw material with pure lines. Part of the project Made in Situ, it is the result of collaboration with NF Cork and Granorte. Photo Nuno Sousa Dias.

To grasp the icastic force of this project, we need to take a step back, to the 2010s, which from the standpoint of design culture were defined by two fundamental macro-trends: that of a leap forward into the digital future, and that of a rooting to the ancestral past of the human condition, which has gradually intensified in reaction against the first. Observing the recent evolution of these directions, we can note that in spite of two years of pandemic shock, design does not seem to have undergone a substantial shift of its movement with respect to the previous period. The fascination with holographic immateriality and the appeal of cavernous shadows continue to function as the main attractors for the aesthetic morphology of objects – although, if we look closer, in spite of the indubitable continuity, we can sense that something below the surface has changed. 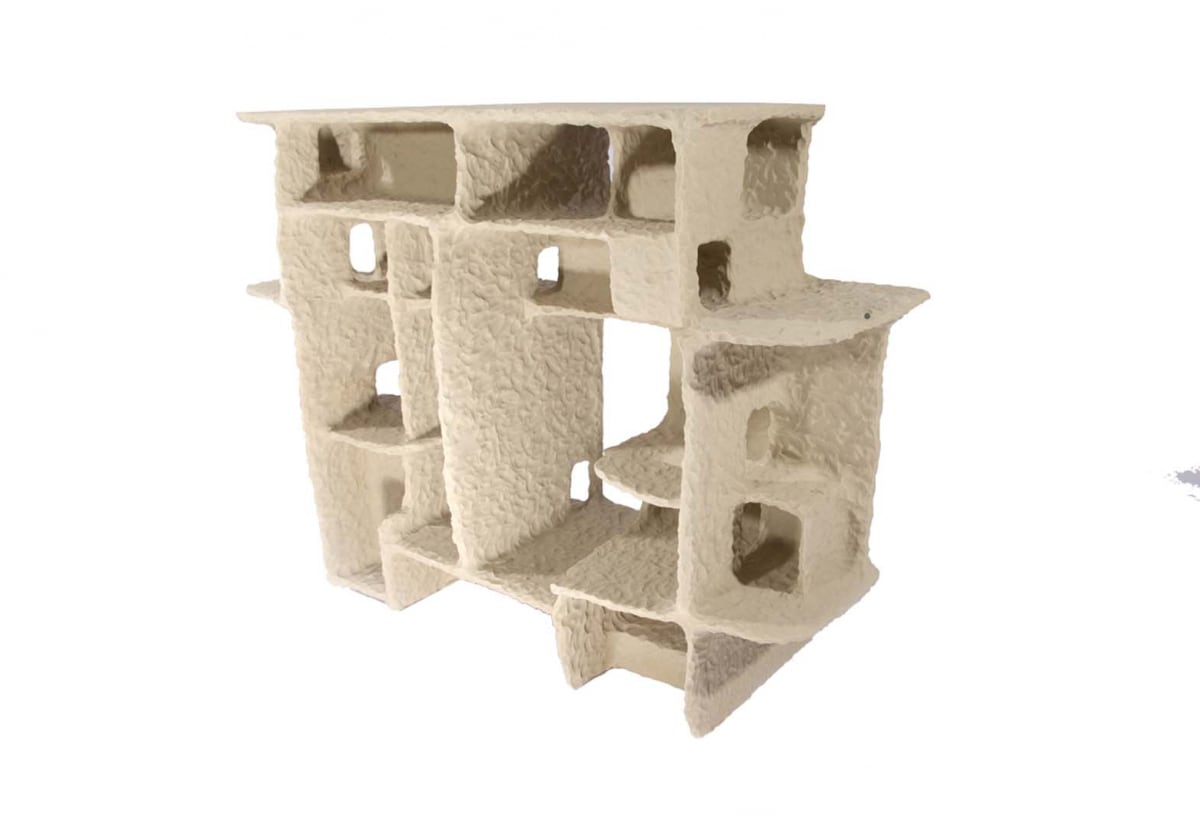 3
The RBS console by Steven Haulenbeek, made by bonding sand and resin. The regressive aesthetic gives the piece an expressive potential that is inversely proportional to its formal finish.

The discontinuity triggered by the socially and psychologically traumatic experience of the lockdown can partially be ascribed to the cyclical character of the crises that pertain to the capitalist system, whose functioning relies on an internal imbalance in which the ‘normal’ condition is one of growth, not one of stability. On the other hand, the exceptional reach of the pandemic crisis seems to call a new factor into play, a sort of subtle, pervasive ‘long Covid’ of design that has quietly begun to modify its expressive meaning. The objective of continuous growth implies a constant increase of the present condition in the near future (that ‘more’ pursued in terms of sales, income, GDP), which makes the situation always seem to fall short, to be lacking. Constant growth and eternal dissatisfaction are part of the same socio-economic order, which can never lead to a state of satisfaction, but keeps us in a condition of structural disappointment (some say unhappiness) with respect to a future that must always be ‘better and brighter.’ 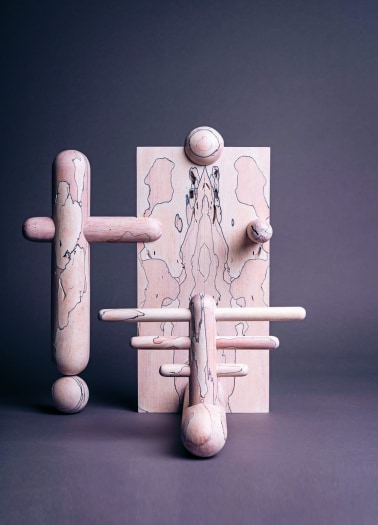 Useful/Useless by Hamilton Holmes is an exploration of matter and form in unique pieces that embody the features of contemporary furniture in original sculptural transfigurations.

Nevertheless, at times this imbalance leads to a collapse that becomes ruinous in proportion to the interconnection guaranteed by the capitalist environment (the more numerous are the connections, the greater the internal kinetics of the system, and hence the potential for ulterior growth). This is how ‘crises’ are generated, like that of the subprime mortgages or that of major migratory flux. Crises that in spite of their grave impact are never of the system, but always within it, like phases of its functional logic. As we were saying, however, this time something seems to have hit deeper, at a level which the system is having trouble coping with. Proof of this can be seen in the widespread phenomenon of the ‘Great Resignation,’ in which more and more employees are voluntarily quitting their jobs, although labor experts are at a loss to find a ‘rational’ explanation (namely one that is based on economic calculation). It is as if people were waking up after a long sleep, a dazed drowsiness crowded with brand-name dreams taken over the creative energy of the social body, snaring it in an advertiser’s idea of happiness that led to producing (and working) more than was necessary, not to feel better but to feed the surplus that maintains the imbalance of the system. 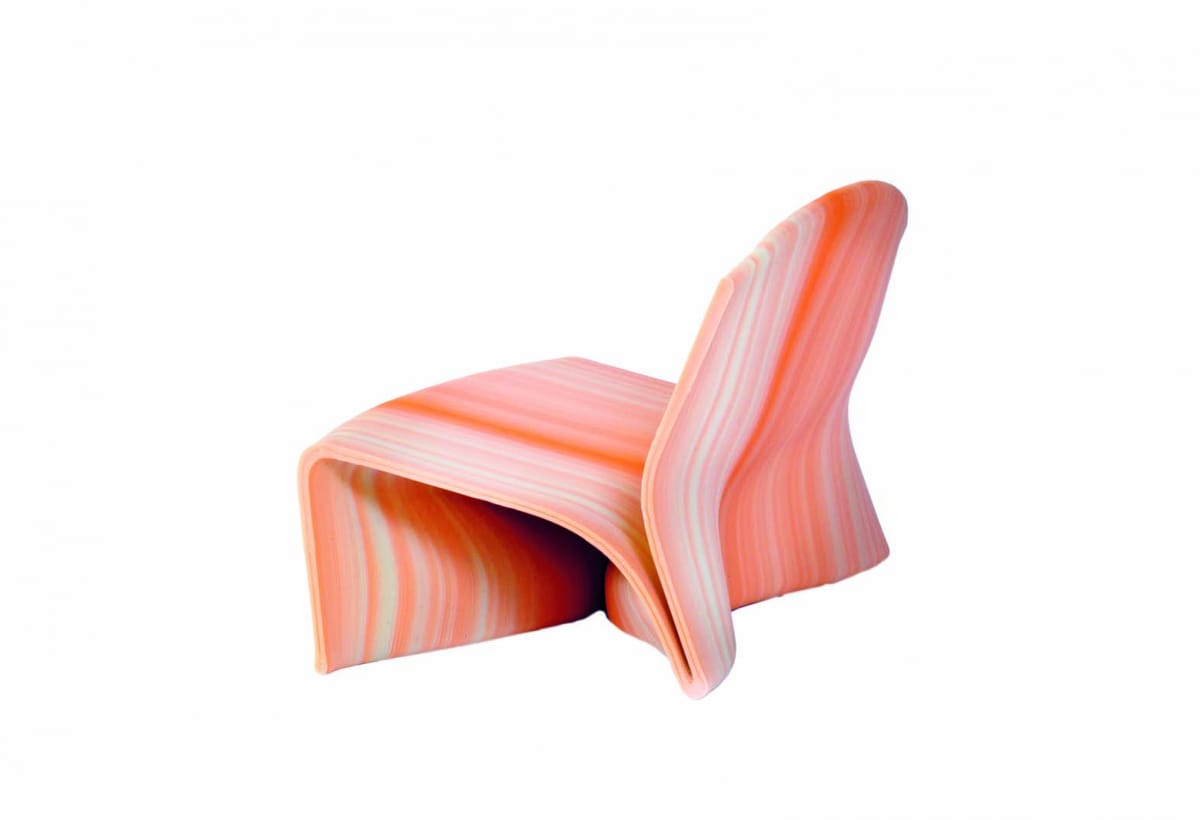 3
The 3D printed Second Nature collection of indoor-outdoor furniture in plastic from the sea, by The New Raw in collaboration with BlueCycle. Winner of the first prize in the Industrial Design category in the Guiltlessplastic 2020 contest organized by Rossana Orlandi. Photo Alina Lefa.

The lockdown, at least temporarily, has swept aside the veil of all this, and even if the system has immediately tried to close ranks, at this point we have called its bluff. What we have seen is what the languages of design are now trying to narrate. An unembellished reality, crude but no longer caught in the suffocating embrace of productivism. And while fish have returned to swim in the canals of Venice, that which decades of a market-society had concealed behind the veil of spectacularizing of commodities suddenly appears not to be a clear, ‘Platonic’ truth, but instead an intrinsically adulterated, somatically contaminated, genetically modified reality. A post-limpid truth, like the water of the oceans, in which the presence of plastics is so widespread as to become a new ‘natural resource’ – a resource, that is, extracted from a nature that is no longer ‘natural,’ ready to take form through 3D printing. It is this crudeness, these grains of truth held together by a matrix of falsehood, which if it melts would make the truth itself melt away like snow in the sun, that design is trying to narrate today. The naturalness of an artifice that has penetrated so deeply into reality that it has become an unassailable aggregation of truth and fiction. 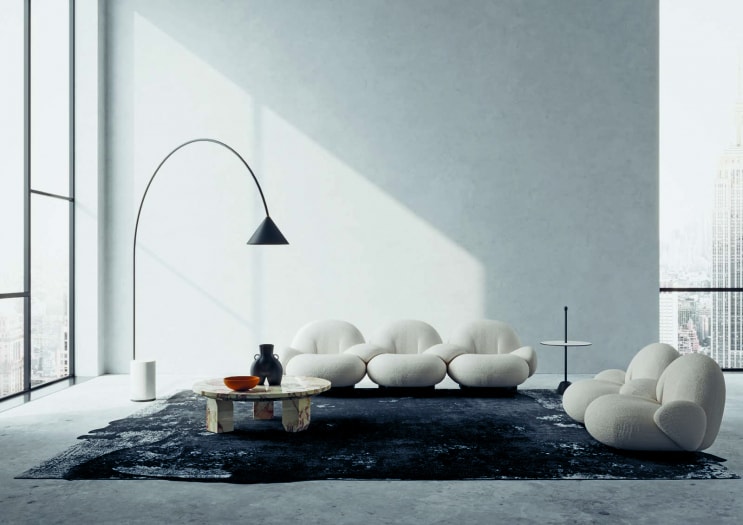 The Castilian carpet designed by Calle Henzel (Henzel Studio), in the living area, reveals the karstic foundation of human existence. Knotted by hand in wool, mohair and silk.

The remixing of cultural contents of design caused by the giant reset or, as we have called it, the ‘reboot’ (Interni no. 697) of the two years of lockdown, has given rise to a primordial soup in which nature and culture, opacity and transparency sustain each other, and the hopeful curiosity about ‘metaverses’ is triggered in widespread awareness of the themes of sustainability. This can be observed in the shards of brutal material truth embedded in the visual patina of backlit features in projects like Seduction by Najla El Zein, and Imaginary Geographies by the studio gt2P for Friedman Benda Gallery, solid as landscape and sweetened by graphics. More roughly (though with contemporary taste), it unfolds in the living room with the Castilian carpet by Henzel Studio, and the Erutuf by Studio Lievito for JCP Universe. These works display rugged and soft, scratchy and sleek aesthetics, also see in the functional sculpture Useful/Useless by Hamilton Holmes or the RBS table and shelving by Steven Haulenbeek, as well as the Geneviève sculpture by Simone Pheulpin. 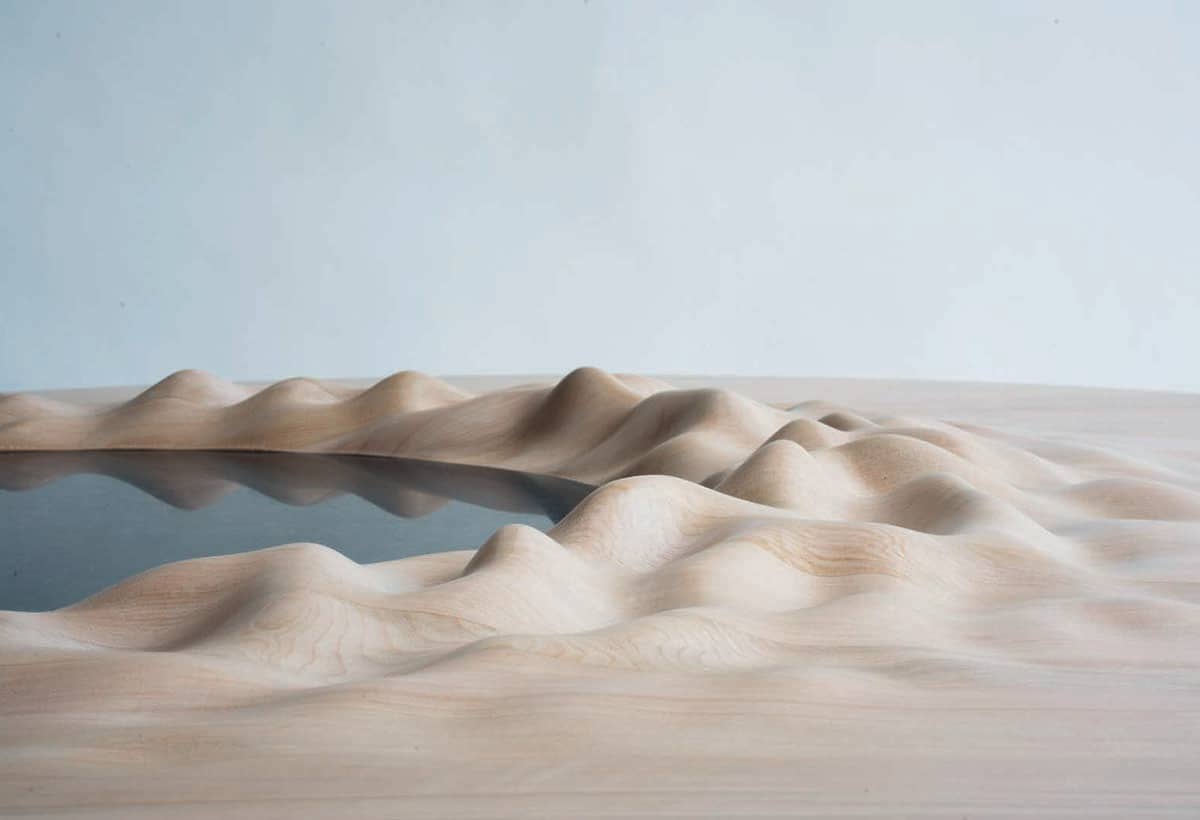 2
Imaginary Geographies is the material reconstruction of the iconic chain of the Andes, the natural boundary of Chile, home of the members of the studio gt2P (Great Things to People). The form is made by the geometric transposition of an audio composition of the sound of the mountain chain, mixed with verses from The Imaginary Man by the poet Nicanor Parra.

A less abrasive interpretation, more oriented towards the balance between extreme forms and understatement, is offered by Pierre Yovanovitch in the Asymmetry chair. These androgynous, severe yet genteel objects are constructed starting from the ‘natural’ resources of an era we might call ‘semiocene’ (shifting the concept of ‘anthropocene’), in which the production of signs is so stratified as to become part of the geological background of the planet. The Burnt Cork collection of furnishings by Noé Duchaufour-Lawrance or the Mother of Pearl seating by the studio Plasticiet are thus made with fossil materials of an abysmally man-made scenario, in which being honest or disguised, functional or fictional, exist on the same plane – as happens with models, who are never really ‘nude’ because their bodies, even when undressed, correspond to a highly culturalized aesthetic ideal. Likewise, the anatomies of these objects set themselves over and above the dichotomy between covered and uncovered, foods that go beyond the distinction between the raw and the cooked, in the sense the anthropologist Claude Lévi-Strauss assigned to these concepts, identifying the cooking of food as the act of separation between cultural and animal conditions. 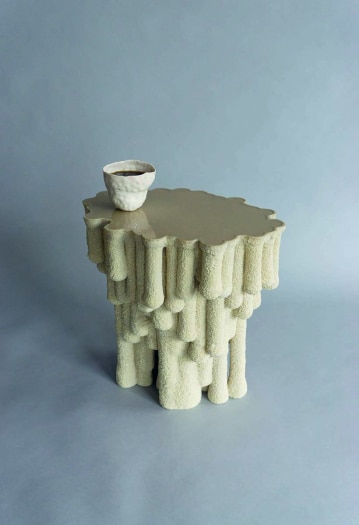 RBS Core table created by Steven Haulenbeek through a particular process that bonds sand and resin. After hardening, the compound takes on a form inspired by natural elements like cacti or rock formations.

The Veil of Maya

The theme of the relationship between reality and fiction has been addressed from the outset by both western and eastern philosophical thought, with a meeting point in the reflections of Arthur Schopenhauer (coexisting, in the latter part of the 1800s, with the birth of design as a discipline). According to the Hindu tradition, referenced by Schopenhauer in the concept of the Veil of Maya, the form of things is the result of an illusion dictated by the limited ability of our senses to grasp reality, which in itself has no form and no appearance. Pure amorphous and omnipresent persistence, reality cannot be seen from the outside, or actually cannot be seen at all: nevertheless, through sensorial myopia, we believe we can see it, and thus we generate the illusory form of things through the perceptive arrogance of our gaze. 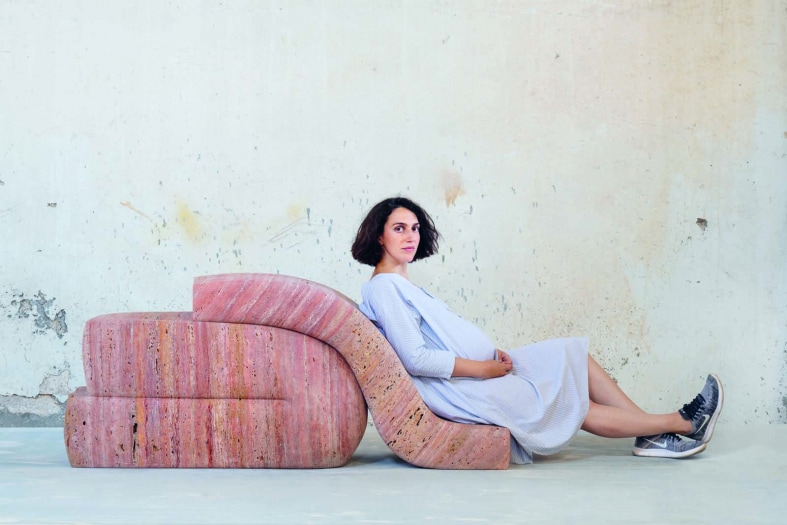 The massive presence (also for use as a chaise longue?) of the sculpture Seduction, by Najla El Zein, in Iranian red travertine. Photo Damien Arlettaz, courtesy of Friedman Benda and Najla El Zein.

The erasure of form

But as soon as we realize the veil is there, it is therefore removed, and what is displayed is the living flesh or reality, its opaque pulsation without odor, flavor or color. That ineffable substance that for the protagonist of The Naked Lunch by William Burroughs, in a rare moment of lucidity within an existence otherwise hallucinatory due to drug abuse, sprang to the gaze “in a frozen moment in which everyone sees what is on the end of every fork,” when the cold flesh of which we are made is about to envelop the cold meat of which the world is made, and the obscure outcome of being is fulfilled in the erasure of form. Design without devising, artifice without adulteration: this is what the design of the new decade looks like today, seething at lukewarm temperatures, glowing with an openly artificial opacity, and therefore transparent.