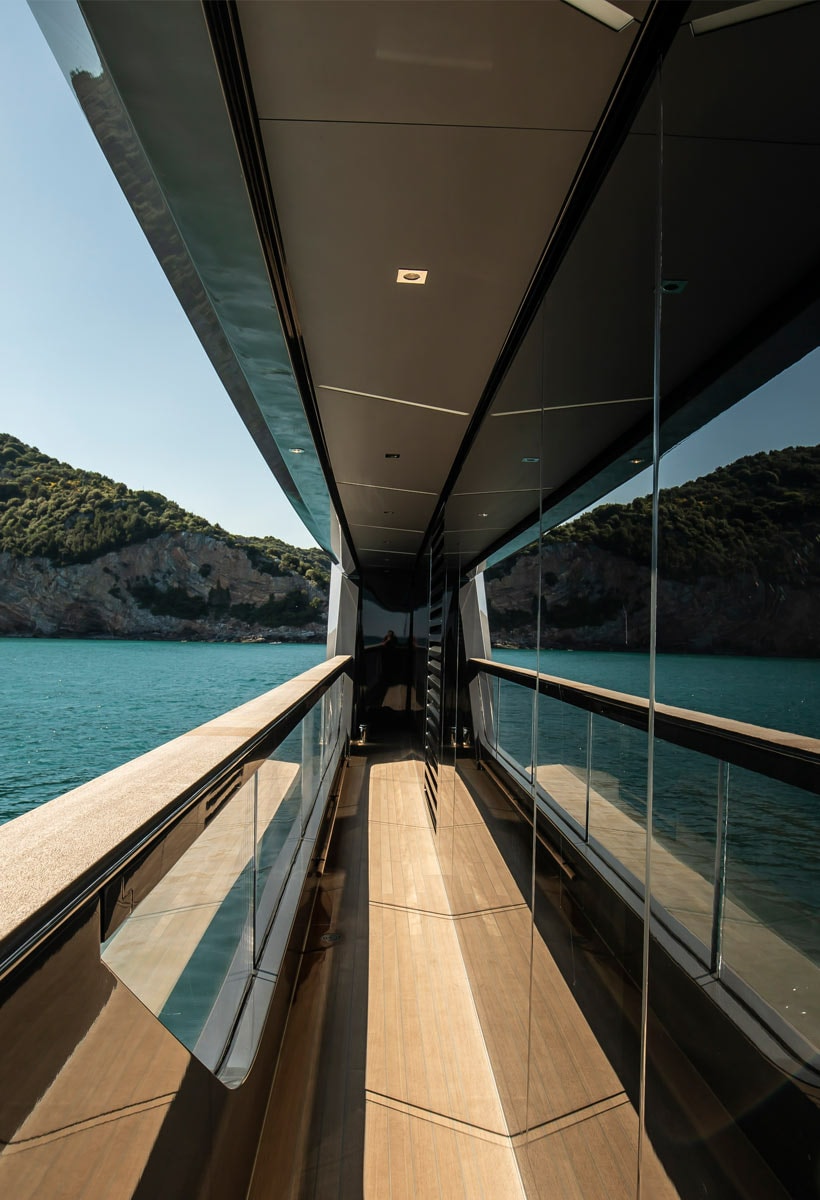 Fast and contemporary. Panam is one of the latest creations from Baglietto, built for a young owner who loves performance and design, who wants to experience the yacht in dynamically but above all out in the open air

Paris is often affectionately dubbed Panam. Just like the name of the new Baglietto 40-meter overall length, a watercraft built in the image and likeness of its owner. Beauty and dynamism, just like the Ville Lumière. “Performance and comfort: these are the essentials embodied in the design,” observes Diego Michele Deprati, Baglietto’s CEO. The shipyard, renowned worldwide for its versatility in the creation of custom-built craft, has created a yacht with a slender profile, a powerful wedge in keeping with the tradition that distinguishes Baglietto yachts, one that skims compactly across the waves, with a solid stern. and a vertical bow, unusual in fast hulls. “Panam has a marked aptitude for performance, ensured by its aluminum alloy hull, its three engines and three hydrojets that impel it to a top speed of 31 knots and a cruising speed of 25. To attain performance at this level, a lot of the technical components, such as the four stern doors, have been made of carbon fiber to keep the weight down.”

A high-performance yacht that also has a marked potential to be a refined home on the water. It was designed by Francesco Paszkowski Design, which styled both the exterior and the interior, the latter in partnership with Margherita Casprini. 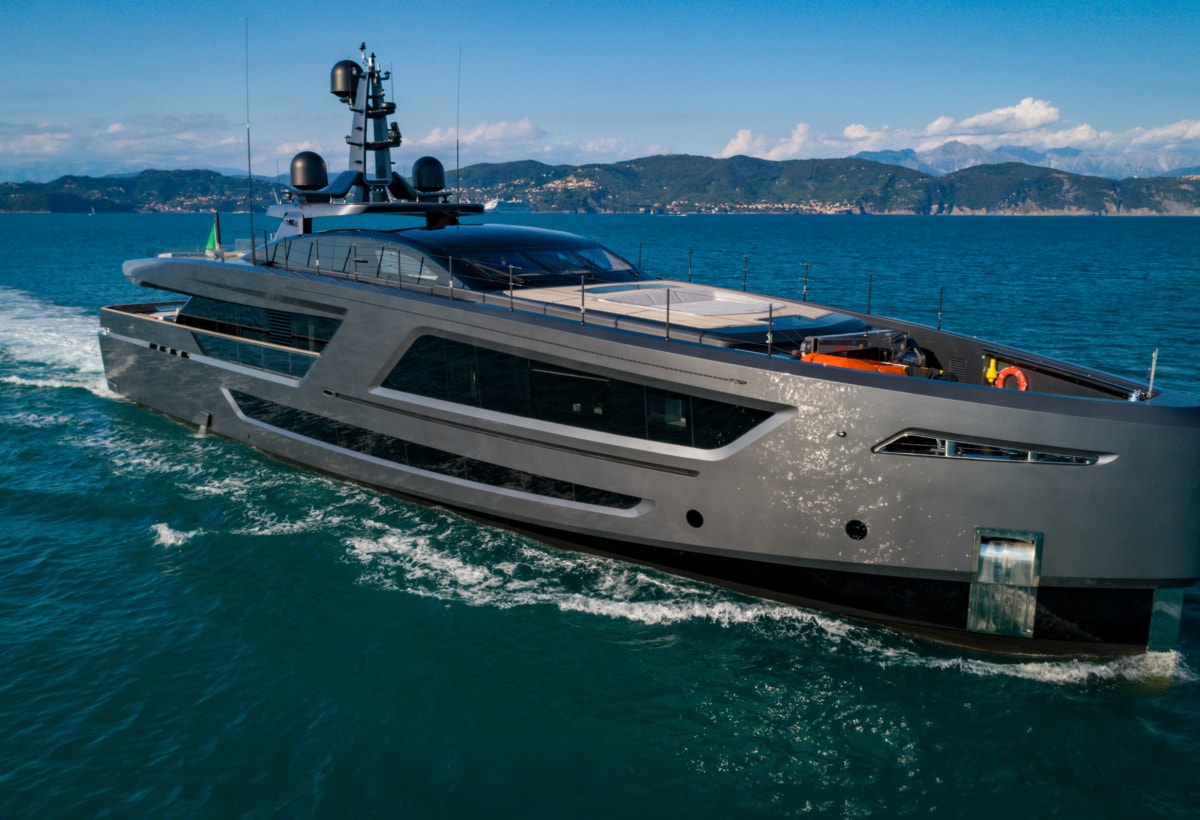 6
Panam, Baglietto’s 40-meter yacht, 8.40 meters wide, has a slender profile, with a powerful stern and vertical bow, unusual in fast boats. It has a top speed of 31 knots. PH.Sargentini

Design and performance, but without compromising on livability and comfort: spacious volumes everywhere and above all an intense relationship with the sea, a further key point in the project. Large windows open the interiors to constantly changing panoramas, but also stunning outdoor structures: there are architectural solutions that ensure that the views of the sea are never obstructed, with glazing set in the gunwale on the level of the living area of the main deck, along the perimeter of the flying bridge, and in the large outdoor convivial areas.

To ensure the owner and guests feel at home on board, the designers have created intimate and refined spaces. In keeping with the exterior design, the interiors have a contemporary styling, which favors the warmth of wood (teak and oak), lacquered surfaces (for the ceilings and some wall facings) and light shades of grey and dove-grey; onyx and marble in the selection Cappuccino, Calacatta, Persian grey, Marfil Cream, Eramosa and Coffee Brown embellish some of the interiors. The effect desired (and achieved) is of contemporary elegance and stylistic coherence. 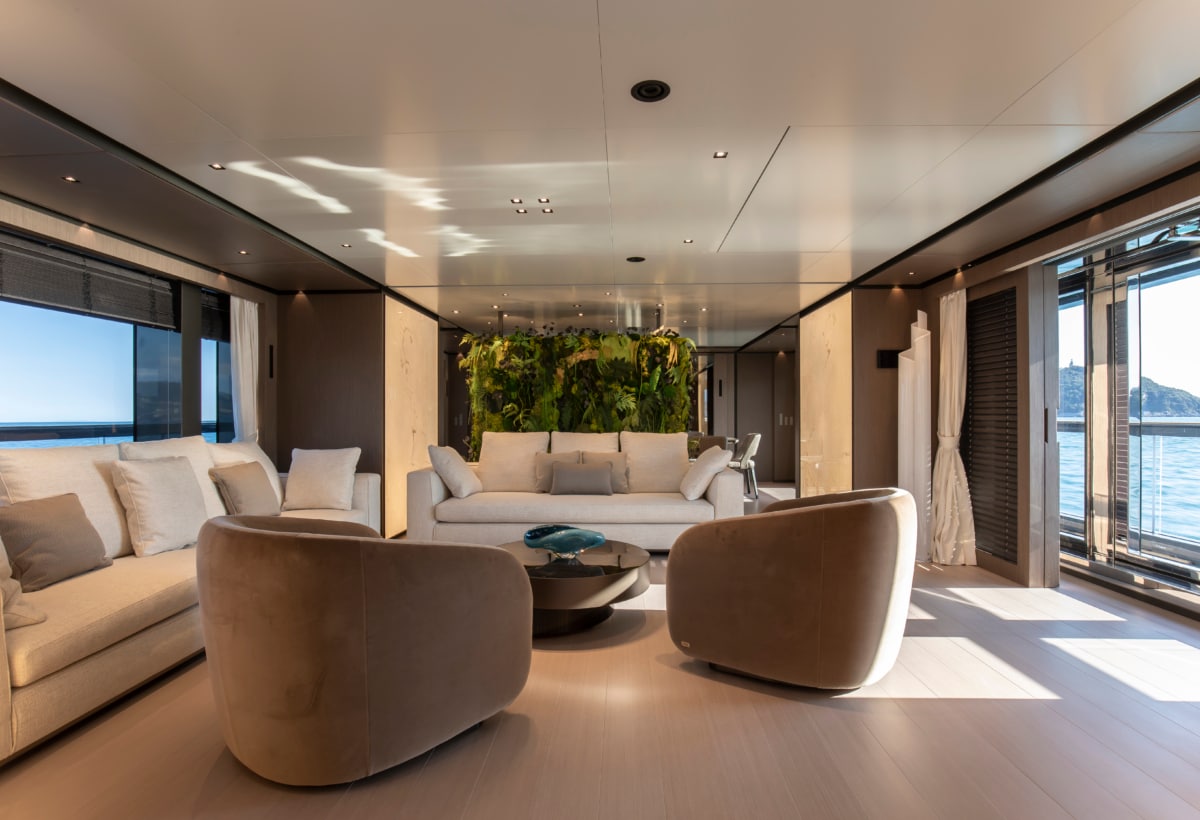 4
The lounge on the main deck, with Fanny armchairs from Fendi, Powell sofas from Minotti and a Minotti coffee table, is surrounded by large windows giving all-around views of the surrounding seascape. Ph. Sargentini

Features from home design have migrated on board, such as the vertical “green” wall used as a screen between the living and dining area: an original solution, which characterizes the environment and sheds new light in the spaces in a natural way.

For the furniture, some pieces made to measure have been combined with selected furnishings from the finest Italian design brands, such as Minotti (for the sofas, dining chairs and coffee tables), Fendi (for the armchairs in the saloon) and Armani Casa for the desk in the master suite. The latter, set in the bow of the full-width main deck, is lit up by the large windows overlooking the sea and the skylight in the bathroom-hammam ceiling, so that the light is shed from two different perspectives, bring nature into the interior. 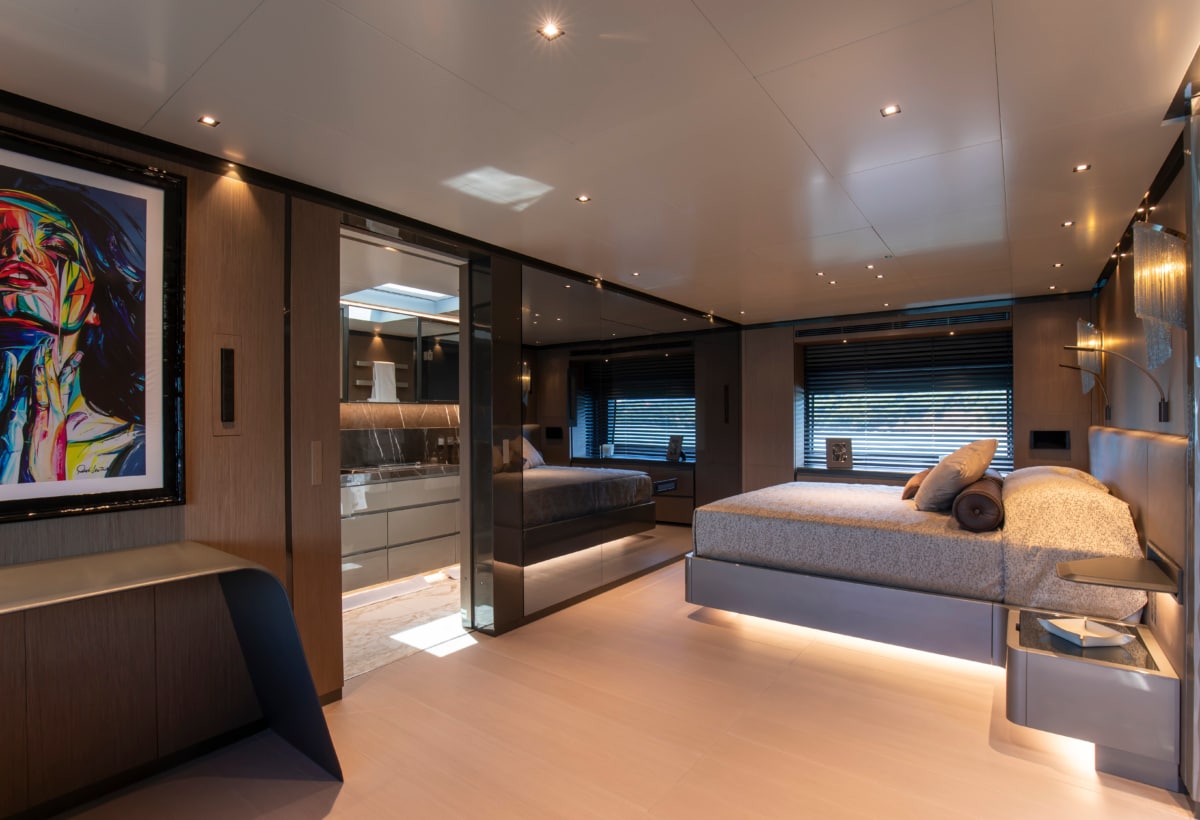 A small and efficient water heater from Viessmann