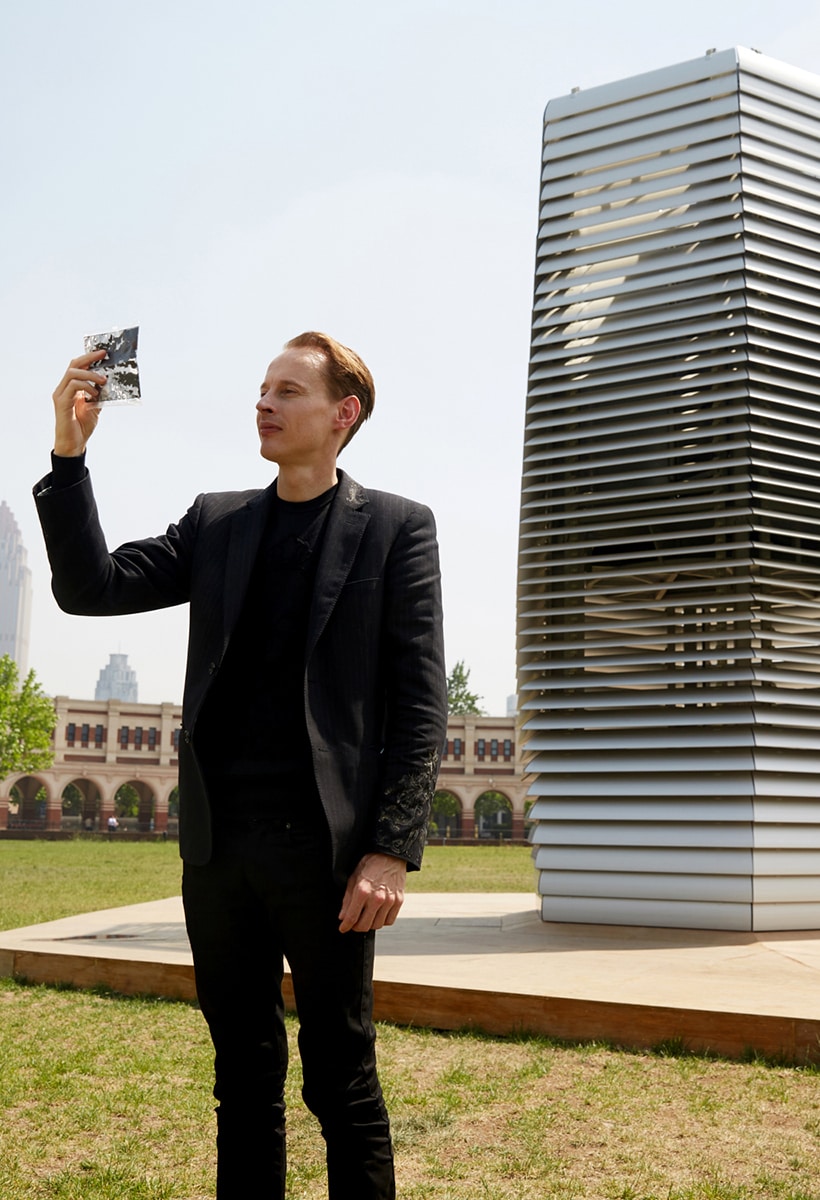 Daan’s secret
Dutch inventor-designer Daan Roosegaarde turns off cities to let us see the stars, cultivates the lands around urban areas with LEDs, sets up the centers with anti-Covid lamps. He always convinces someone to support his dreams. How does he do it?

Before complaining too much about the time we spend on video calls, it might be worth knowing that one of the most interesting and hopefully useful design projects of 2021 happened after 380 Zoom meetings. And that the only constant presence on the screen, in relation to researchers and experts all over the world, was Daan Roosegaarde, from Rotterdam: the Dreaming Dutchman, the man for whom any definition (designer? architect? tech-artist?) seems like a tight fit, due to the multidisciplinary approach this 42-year-old visionary puts into his work. A versatility of types of knowledge that translates into installations like Urban Sun, the anti-Covid lamp presented one month ago, or the recent Grow – a field of leeks in Holland lighted and ‘cultivated’ with LEDs to reduce the use of pesticides – thanks to two even more powerful drivers: dream (the word Roosegaarde uses most often during the 381st video call of Urban Sun, with the journalist) and humility: “After having the intuition of using ultraviolet rays to fight the virus, thanks to an article in Nature from 2018, I searched on LinkedIn to find all the experts required to develop the idea. I asked them to connect, and to offer me 40 minutes of their time. The response was generous. It was the same method I used for Grow, bringing together a team, from photobiologists to engineers to communicators.” 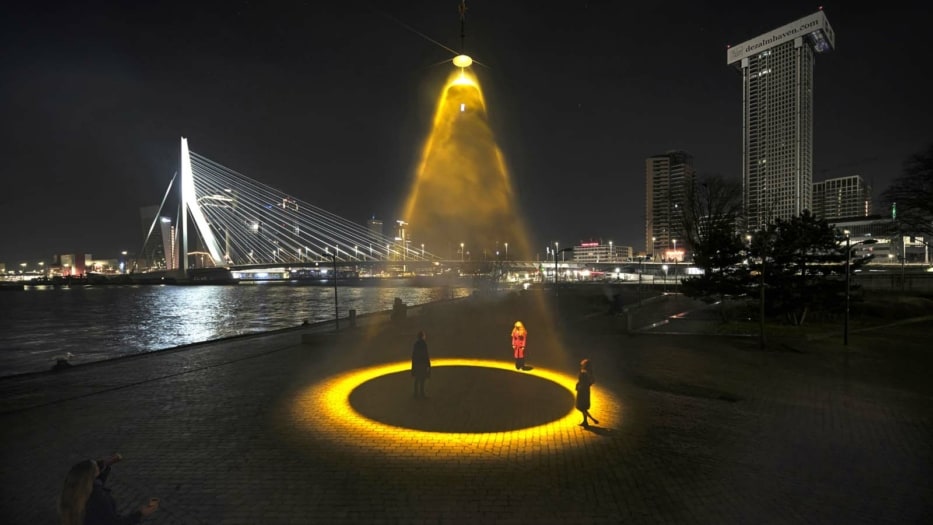 Urban Sun, the anti-Covid light installation designed by Daan Roosegaarde and based on a new type of UVC rays, reoriented and projected at an unconventional distance to avoid harm to human skin and eyes.

The result, after 14 months of work, is a suspended installation – whose images are traveling around the world – created for public spaces, from stations to schools, emitting a new type of ultraviolet UVC rays. The traditional rays kill the virus and bacteria, but they are harmful to human skin and eyes. The new rays of Urban Sun, projected at the proper distance, disinfect the air without harmful side effects. A process that seems to be exclusively scientific, but in which Roosegaarde sees the vocation and the impact of design: “The article in Nature was pure science, but to re-orient the wavelength of the rays a designer was needed.” Urban Sun and Grow are two perfect examples of 'protopia,' as Roosegaarde calls the kind of practical utopia he sets out to achieve. In this past this attitude led him to create smog-eater towers, bicycle paths lit by solar energy, kites that produce clean energy. 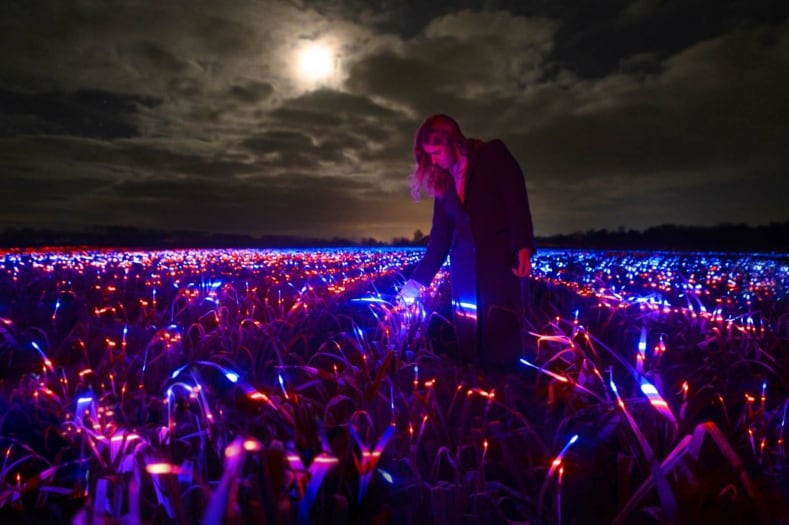 Grow, the luminous LED installation made in January in northern Holland: a field of leeks of 20,000 square meters, with lights that seem to dance in a celebration of the beauty of agriculture. A functional installation, which thanks to applied photobiology reduces the use of pesticides.

He narrates the project model as follows: “In my first works I concentrated on technology, but then I understood that the secret lies in nature; that butterflies and insects fly freely, without the need for traffic lights, which is instead the case for human beings. Technology is an ingredient that gets lost unless you have an overall vision. And this vision has to be humanistic, like that of Leonardo. But we are no longer in the Renaissance. Today we live on super-expertise and extremely specific sectors: the job of the designer is to put them together and to give them a destiny. This is why when a mayor hires me to design fireworks that cause no pollution and do not frighten animals, I think about how to turn off all the lights in the city for 15 minutes, so we can see the stars once more. Because the stars, not the umpteenth creation of man, are the spectacle that gets lost, which light pollution prevents us from seeing.” 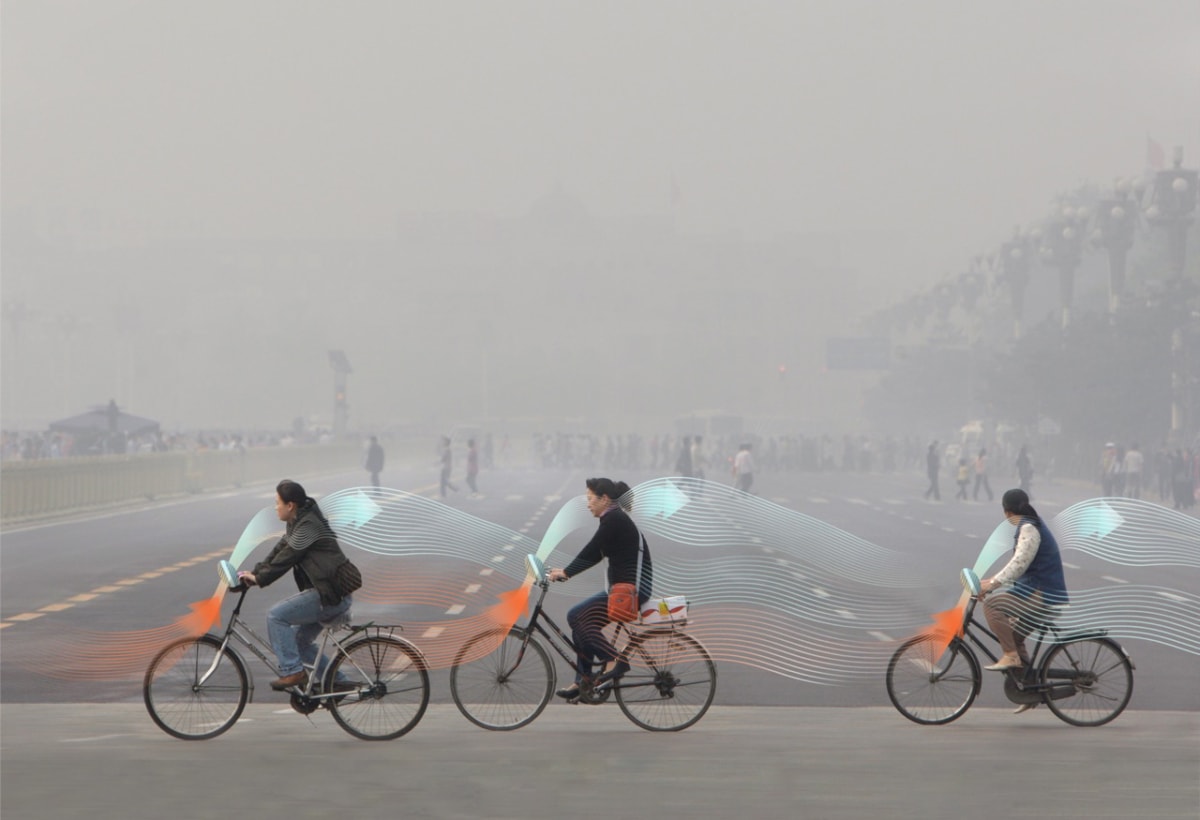 3
Bicycles that breathe smog and generate a radius of clean air for cyclists, designed in collaboration with Ofo, the Chinese bike sharing company.

This holistic vision reaches Roosegaarde by way of precise readings. Such as Paul Hawken, an environmentalist and theorist of an exit strategy from global warming based on verifiable economic studies and perspectives. And then the passion for the 'Pixar method' of John Lasseter and the Californian factory, “where they work on shared ideas without ever discarding them, improving them together even if they seem wrong.” Lasseter is also the theorist of the balance between the hungry beast, the costs of a company that wants to achieve great things but first of all has to stand on its own two feet, and the ugly baby, the intuition that is still fragile but can make a company take off. In effect, not even economic issues seem to daunt the Dreaming Dutchman very much. Is this because for years now he has been able to interact with clients capable of grasping his visions? “I believe that the level of the clients with whom one works depends on the story that has been constructed,” he says. “For Grow, Radobank set just one condition: the project had to be radical. On the other side, however, there is Urban Sun, which would never have seen the light if I had waited for a call from someone with a brief. The life of a designer is the pro-active balance between ‘us’ – the relationship of the creative and their client – and the ‘me,’ namely the creative looking in the mirror, with a clear idea of their identity and what they want to achieve. Only in this way can the challenges become a question of imagination, and not simply of money.” 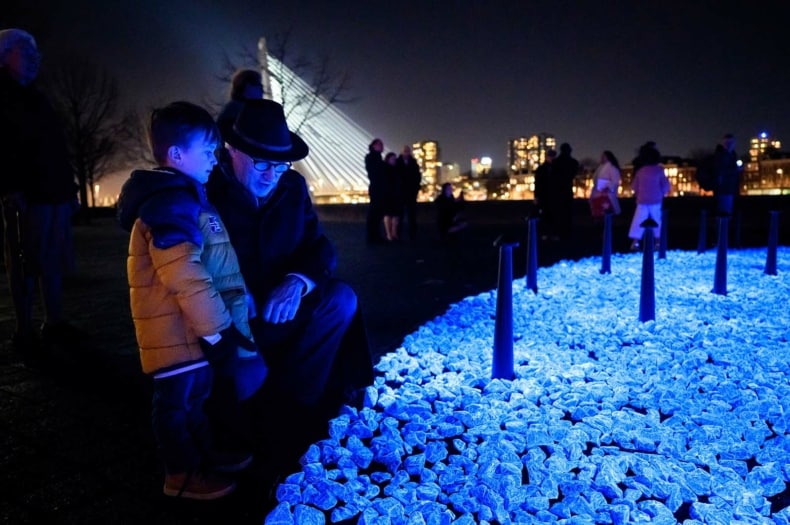 Levenslicht in Rotterdam, an installation composed of 104,000 luminescent stones, an ‘active’ monument to commemorate the Shoah.

What remains to be understood is where Roosegaarde gets the vitality that allows him to approach apparently impossible challenges. The answer, in the end, is quite simple: “From the love of the future. The love we cultivated until 50 years ago, which gave us the Concorde and the moon landing, and in architecture gave us Superstudio. Today no politician would use the words of John F. Kennedy regarding space missions: ‘we wanted them because they are hard.’ We are afraid of the future, we avoid it and therefore we no longer know how to design it. I believe that the meaning of my work lies in giving the dream and the future back to people, to trigger curiosity and hope. The answer to the question about who is a designer today, and to what extent the designer has to also be a scientist or a philosopher, can be found in this mission. And architects should see themselves in the same terms. At the moment, however, I don’t see very many who are willing to do that.” The Waterlicht installation, created to raise awareness of global warming and the rise of sea levels. Roosegaarde’s firm was hired in 2015 by the water management authorities of the ministries of the Netherlands and France to visually ‘narrate’ the phenomenon and its possible consequences in the near future. The work met with enormous success in Paris and Amsterdam.

Carl Hansen & Søn: how an icon is born

Caccaro, a new flagship to tell about oneself