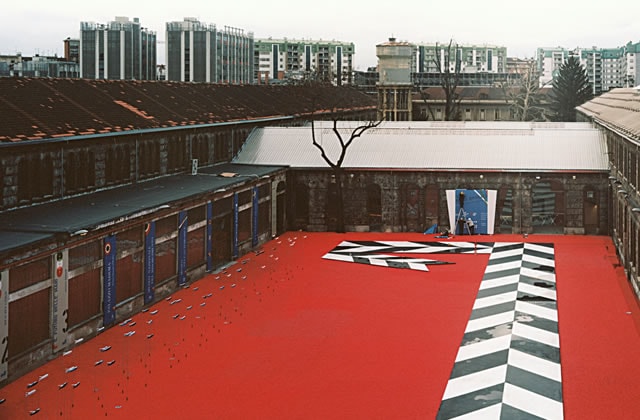 They reject any preset verities and are far from pursuit of a style; instead of ‘muscular displays’ of spectacular self-fulfilling architecture, they opt for listening to the stories of different places and contexts, responding with a free, contemporary language, decisive, surreal at times, because they think of architecture as a “tool for achieving knowledge of reality”, to improve that reality.

The idea of a submarine, a silent space that slides below the water’s surface, far from the noise of the world, used for the website and their narrative monograph, seems like the metaphorical summary of a way of doing things, where architectural design is the result of slow meditation that leads to specific solutions organized place by place, in different urban contexts and landscapes.

Nevertheless, they are not involved in stylistic and figurative camouflage. The idea is to launch – sticking with the submarine metaphor – beneficial architectural ‘missiles’, precise and contemporary signs in the landscape, to activate processes of improvement and comparison. As the projects presented here demonstrate, in the design career of 5+1AA it is useless to look for a repeatable architectural motif, a sort of recognizable grammar reiterated on an ideological-programmatic level. Instead, we can see great expressive freedom, not a nostalgic return to the eclecticism, but a move toward the ‘principle of specificity’. This means approaching cases and problems and responding to each one in a different way, rejecting the modernist legacy of universally applicable concepts. Describing their modus operandi, Femia and Peluffo speak of “polyphony”, a multilingual response of adaptation, listening, analyzing, using the design process as a moment of knowledge restored in constructed form. An interesting attitude for this issue of our magazine, devoted to Italian-ness, as we present this selection of ‘Italian projects’ that reveals an openness to expressive freedom in connection to the character of places, whether they are existing buildings in which to operate by smoothing, adding and completing, or brand new works at the edge of the urban fabric, or new urban portions set down in a variety of contexts. A procedure based on variation, where doubt and its solution can be used to counter certain currents of contemporary architecture: decontextualization, the move toward spectacle and iconic presence, exaltation of linguistic styles. All this is replaced by 5+1AA using certain guiding terms that can group or join their various constructed works: “Generosity”, namely sharing and thinking about the fact that every work of architecture is ‘public’; “Body”, relating to what exists with an attitude of dialogue and interaction, avoiding the autistic monologue; “Marvel”, more than an emphasis on formal solutions, an effort to get back to reality, to reveal its meaning through its knowledge. Thus, in the short selection, we can grasp something of the ‘Italian procedure’ of this architecture studio; a polyphonic path of meaning and a passion for urban space, for the material of architecture and a taste for balanced counterpoint, themes suggested perhaps by their city – Genoa is made of layers, where in a “proud disorder of buildings reigns the genius of metamorphosis” (as the historian Jacques Guillerme wrote) – that emerge in close relation inside a sequence of design opportunities that are always translated into different architectural solutions. In Turin, in the Officine Grandi Riparazioni, an urban artifact is taken as a resource, and its reutilization, though temporary, connects to the idea of the plaza, the festival (the celebration of the 150th anniversary of Italian Unification) with a large three-tone ‘flag’ composed of covered courtyards with red and green materic carpets, separated by the white volume of the information and reception space for the exhibitions organized in the old work spaces. The rooms retain their image as industrial archaeology, emphasized for monumental effect by the white light and the essential functional modifications, like the metal arches that support the new openings of the internal routes, required to facilitate the flow of visitors. A reutilization, more than an installation, a project that tends to underline the “sensation of belonging” to a not so distant history, where labor is the protagonist in the traces of the place. At times a ‘narrative’ approach is mixed with design stimuli, as in the Recreation Center and Library of Casarza Ligure, where the new security staircase beside the restored building offers a chance to experiment with a story told in constructed form to the young visitors: the staircase is enclosed in a ‘literary plot’ made with the words of Gianni Rodari, alternating white metal and red ceramic letters. A work of architecture to be ‘read’, an explicit contrast with the existing edifice, in the form of a small ‘media building’ with a thoroughly Italian flavor. Still lifes by Giorgio Morandi, on the other hand, are the references for the refined chromatic range applied in the residential reconstruction project at San Giuliano di Puglia in Molise. In this town damaged by an earthquake the recomposition of an urban block takes on the image of a compact form where no two dwellings are alike. A ‘diversity in unity’ resolved thanks to the use of color and variable profiles in a contemporary key, reflecting the ancient idea of the village. In Milan two works approach very timely themes on different scales: the renovation of the Frigoriferi Milanesi building that lights up the anonymous facades with the color red, giving the city an updated figure, also in the interiors; while on the other side of the city, near the new trade fair, a golden building becomes a mutable landmark that changes its image across the span of the day. The Horizontal Tower “is an enigma in the form of a building that forces us to discover the differences of the hours, the marvel of a place that seems gray and uniform, the energy of light, the weight or lightness of the sky”. Further north in the suburbs, at Cormano, the Museum of Toys also comes to grip with an existing situation (am abandoned factory), adding a suspended parallelepiped, a ‘dancing zebra’ that creates a new public space in its portico, cheerfully offered for collective use. As in the French countryside of Ris-Orange, where the new music center is a reminder of agricultural silos, reassembling the memory of the place in architectural form, of the landscape and the work of the farmers. Also at the ‘margins’, those of the Venetian lagoon, the Palazzo del Cinema is like a seaside cliff shaped by the wind, at the Lido, opening on one side to the city with a large glazing whose organic pattern is also a tribute to the tradition of the master glass blowers on nearby islands.