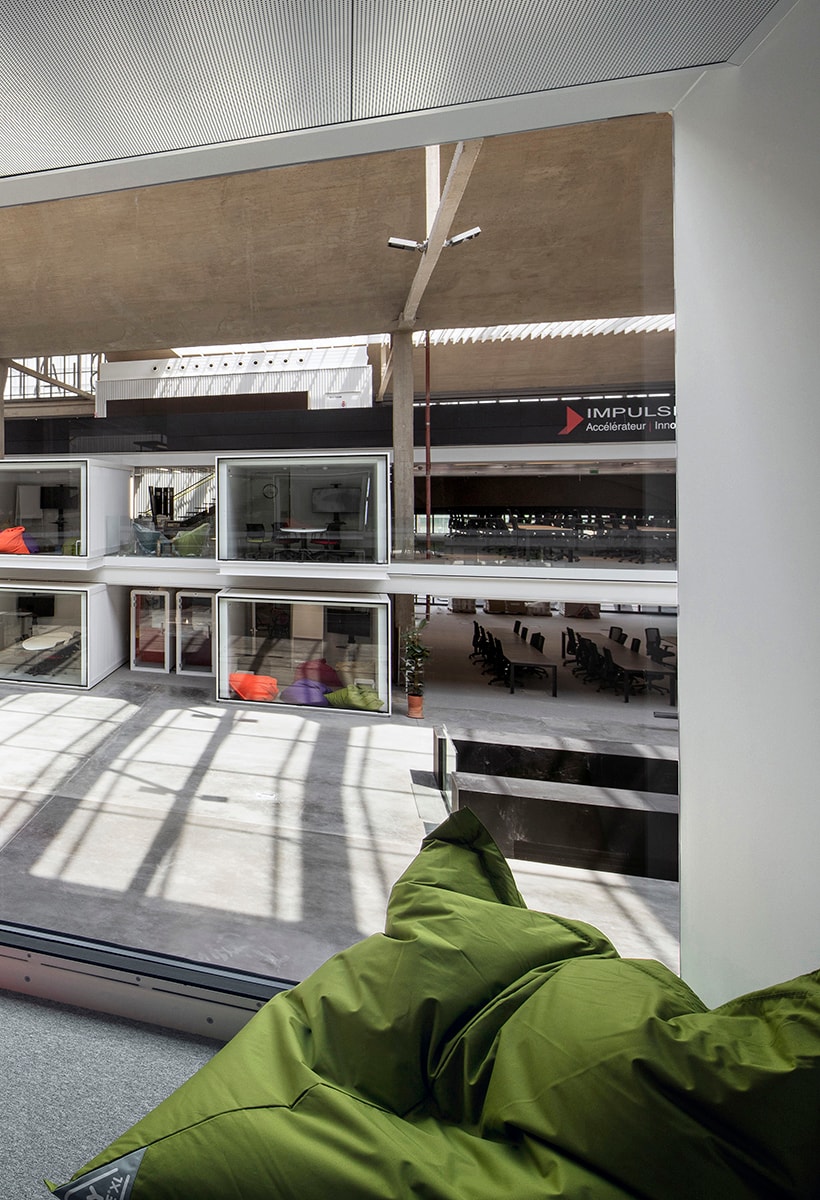 #architecture
A forge of new ideas

Station F in Paris is the result of the recovery and transformation of Halle Freyssinet, a former railway depot from 1929 in the 13th arrondissement, reinvented by the Wilmotte studio as a large urban incubator for up-and-coming entrepreneurs. Nearby, a co-housing project completes the innovative offerings of the largest startup campus in the world

The Station F campus commissioned by the entrepreneur Xavier Niel, founder of Iliad and president of Free Mobile, has been created inside the historic Halle Freyssinet, transformed by Jean-Michel Wilmotte into a large space that welcomes a thousand young entrepreneurs developing various startups.

Designed by the engineer Eugène Freyssinet in 1927-29, the railway facility listed among the ‘historical monuments’ of France since 2012 has a layout with three parallel aisles with a length of 138 meters by 58 in width, and stands out for the experimentation conducted on the use of prestressed concrete, which made it possible to build arches of incredible lightness, with thicknesses that at certain points – along the crest of the roofs – are no larger than 5 centimeters. Initially conceived as an interchange hub for trains and trucks, Halle Freyssinet was connected to the railway network of the Austerlitz station.


Jean-Michel Wilmotte
°
Architect, urban planner and designer, founded an architectural firm in 1975. Together with his team of ninety-nine people of varying nationalities, he is currently working on more than a hundred projects in France and abroad (Europe, Korea, Lebanon, Morocco, Qatar, Japan, Russia, United States …). His firm's activities range from industrial design to architecture and include work in the fields of modern re-adaptation of old buildings and museography. As urban planner, he has developed the concept of “urban interior architecture”, which aims to treat public places with the same consideration as private homes.

It is located in the Rive Gauche urban renewal area, near the National Library by Dominique Perrault. Halle Freyssinet offers the city and Europe as a whole a large urban incubator devoted to the dynamic world of startups. Station F, open to the public seven days a week, 24 hours a day, contains 3000 workstations for startuppers, 60 meeting rooms and a 370-seat auditorium, a restaurant and two bars.

The renovation of the rail depot, connected to the approach of reuse and transformation of urban artifacts that is one of the most widespread practices in architecture in the new millennium, has approached the ample spaces of the naves by emphasizing the central one, lit by a large continuous overhead skylight, and by working on multiple levels in the lateral aisles, which are slightly lower.

The interior of the historic building, again open for use by the city, reflects the versatile philosophy of the campus, which sets out to include as many sectors as possible among the many now in evolution today, to foster growth and the implementation of new technologies. 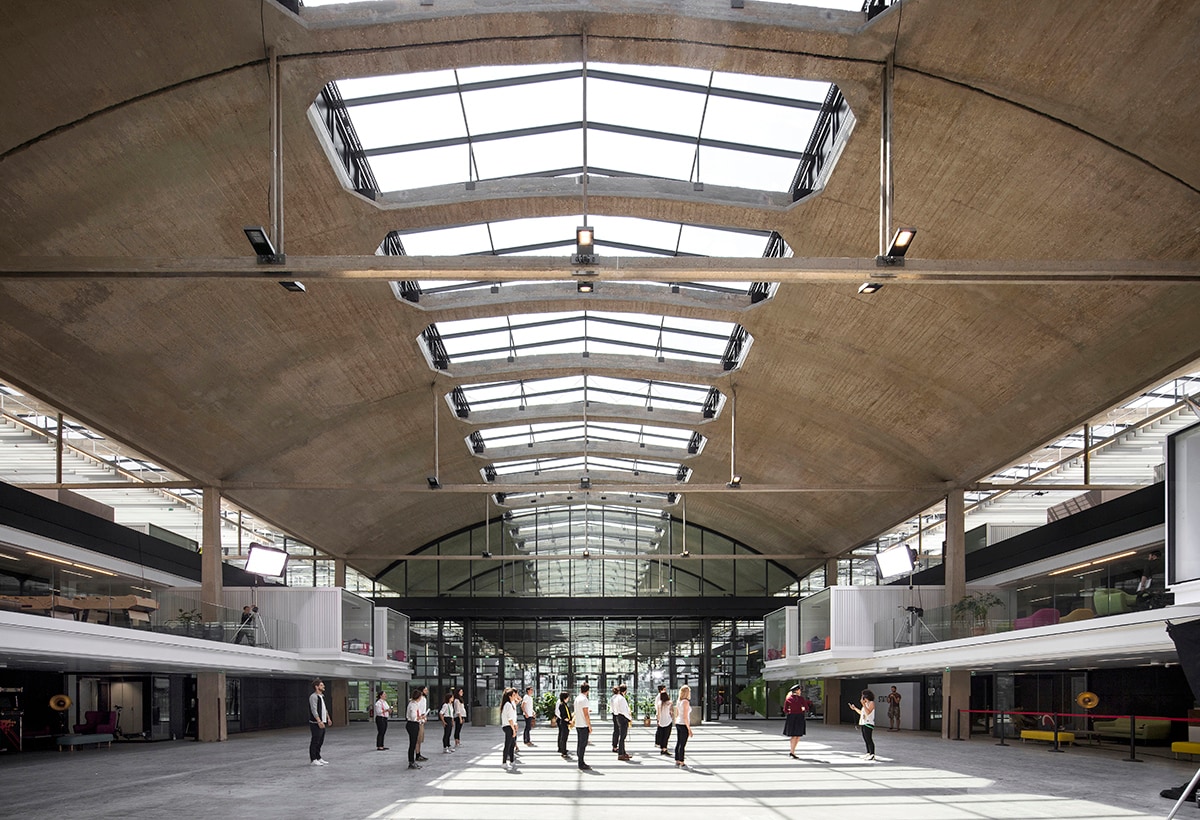 5
The central nave of Station F faced by the operative boxes on the first floor. Two glazed crosswise public passages divide the available space into three separate zones. The original prestressed concrete arches have been restored and outfitted with the specially designed Platea Pro spotlights, high-power fixtures with an essential design, developed for the occasion with iGuzzini Illuminazione. Photo Patrick Tourneboeuf.

The project of reformulation of the interiors subdivides the available space into three distinct and interacting parts. The central nave is for sharing (Share zone), a meeting place for exchange of forms of expertise, with the organization of presentations of digital startups, bringing together entrepreneurs and their potential external partners. Here a Fab Lab (with freely accessible 3D printers) is joined by the auditorium and a series of meeting rooms. A communal glass passage interrupts the central nave, separating the first area of Station F from the second, set aside for creativity (Create zone), a multifunctional workspace for startups and the community, a sort of large interactive open-plan area with modular and connected tables. The Create zone continues along the lateral aisles, organizing 24 ‘villages’ that contain various services: kitchens, lounges, zones for informal encounters, more isolated meeting rooms, Skype boxes, and so on.

“
The typological arrangement on the Flatmates, directly rejects the traditional hotel-like positioning of rooms in a row along a central corridor, instead presenting an open, luminous image that more closely resembles a sequence of large flexible apartments than a temporary residence."

From the first floor a series of white metal boxes face the central nave, with glass on the shorter sides, suspended rooms that are set into an free plan and contribute to bring an effective volumetric rhythm to the overall space. The last zone of Station F, located in the part behind the main entrance and separated from the Create zone by means of a second glazed public passageway, contains a restaurant open to the neighborhood seven days a week and has trees that make it into a sort of ‘winter garden’ directly connected to the urban greenery of the surroundings.

For the lighting of what Jean-Michel Wilmotte has defined as a ‘digital nursery’ the Platea Pro spotlight has been specifically designed with iGuzzini Illuminazione, a high-power fixture with an essential design that fits perfectly into the lightness of the concrete roof vaults. 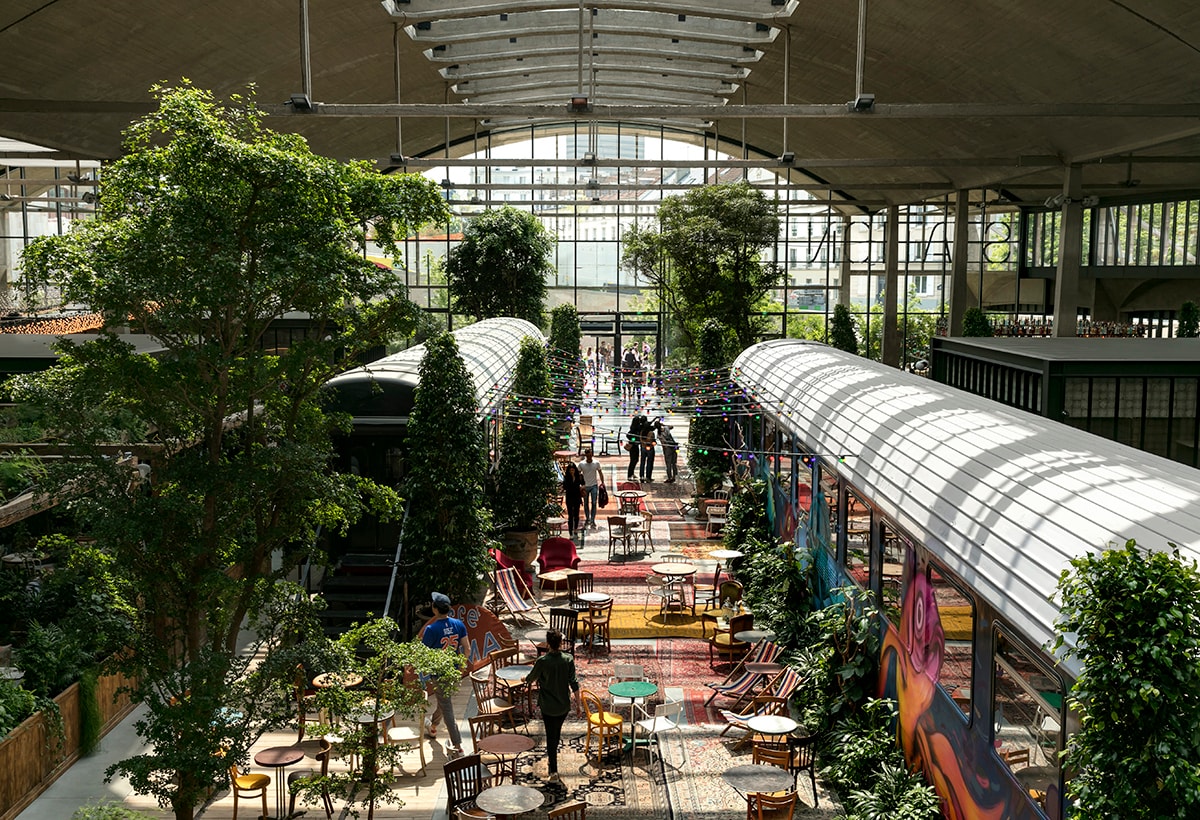 4
The ‘winter garden’ restaurant placed in the final part of the building towards the neighborhood. Photo Jérôme Galland.

Alongside the creation of the Station F campus, at nearby Ivry-sur-Seine an experiment in co-housing has been added as a strategic factor of completion. Three dark towers clad in materials by Casalgrande Padana, conceived as a gathering place also to experience in a temporary, innovative way, now constitute the largest co-housing space in Europe. The Flatmates complex offered to the young businessmen working at the campus is the sum of three towers, from 12 to 18 stories in height (with a circular panoramic skyroom), for an overall area of 12,000 square meters.

The towers are placed around a shared green courtyard, following the alignments of the streets to create two new architectural fronts that stand out recognizably to form a new urban corner. With respect to the traditional and innovative formulas of co-housing, the one proposed by Flatmates stands out not only for the variety of the sizing of the lodgings, but also for their flexibility of use: temporary, with weekly, monthly or annual rentals.

“
On the project Station F, the reformulation of the interiors subdivides the available space into three distinct and interacting parts. The central nave is for sharing, a Fab Lab, a zone for creativity."

The 600 tenants stay in 100 apartments, for subdivision according to specific necessities, with a large common area that incorporates living and dining functions with a kitchen in a single space. The ‘core’ of the house crosses the whole building with double openings on opposite sides, or is positioned at the corner, always facing outward with a balcony. Around the shared space, the nerve center of each unit, the single or connected bedrooms are served by communal or private bathrooms. The various services offered to the community of users and included in the rent include a spa, a gym, a space for events like yoga lessons or cooking courses, a basement for parking and the skyroom on the roof, a restaurant-cafe and a laundry facility. 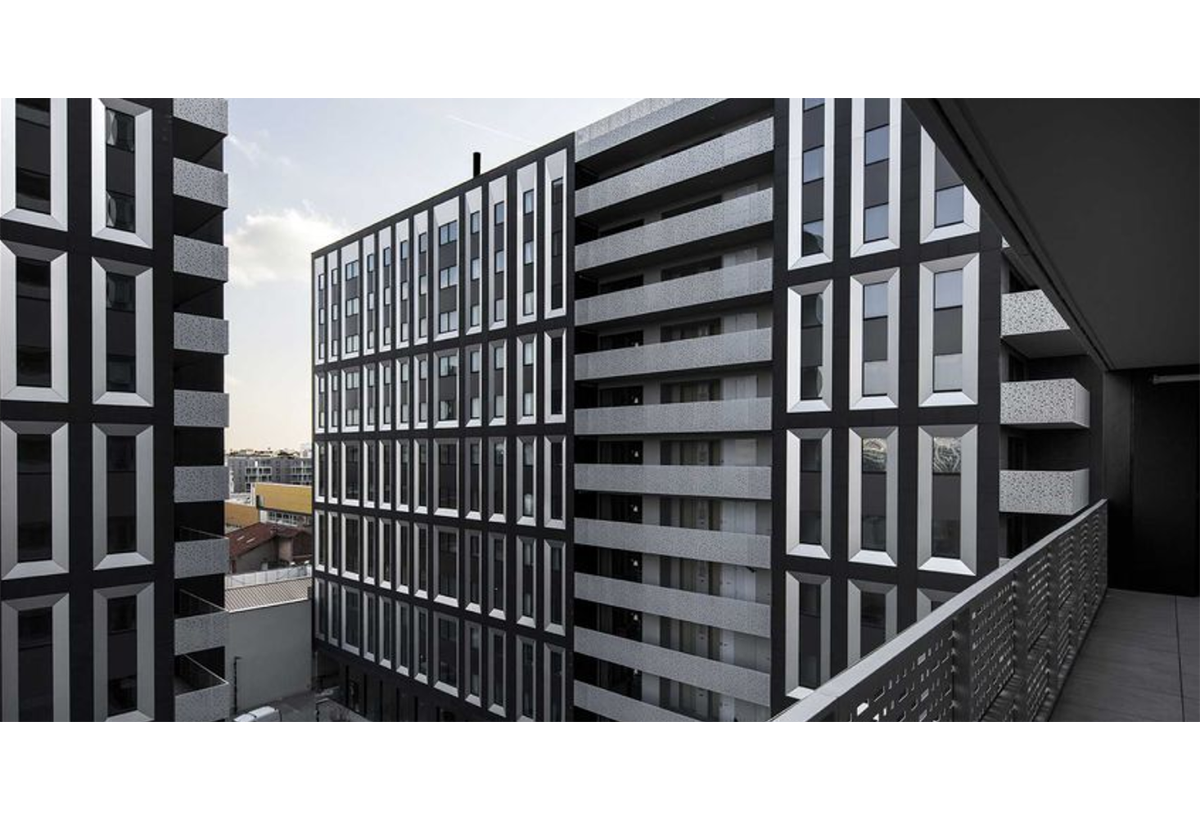 4
The Beton collection of Casalgrande Padana's Granitoker line covers the towers of the Flatmates complex in Ivry-sur-Seine on the facade. It is a ceramic product born from a careful selection of raw materials and advanced production techniques that guarantee high performance in resistance to bending, wear, abrasion, chemical attacks, temperature changes and simplify cleaning operations.

In Europe’s largest co-housing complex, the typological arrangement directly rejects the traditional hotel-like positioning of rooms in a row along a central corridor, instead presenting an open, luminous image that more closely resembles a sequence of large flexible apartments than a temporary residence. The ‘hybrid’ choice, envisioned primarily for young entrepreneurs staying for several months at a time, can be seen as a forerunner of new housing modes in the contemporary city, due to the flexibility of spaces to be subdivided or recombined in larger modules.