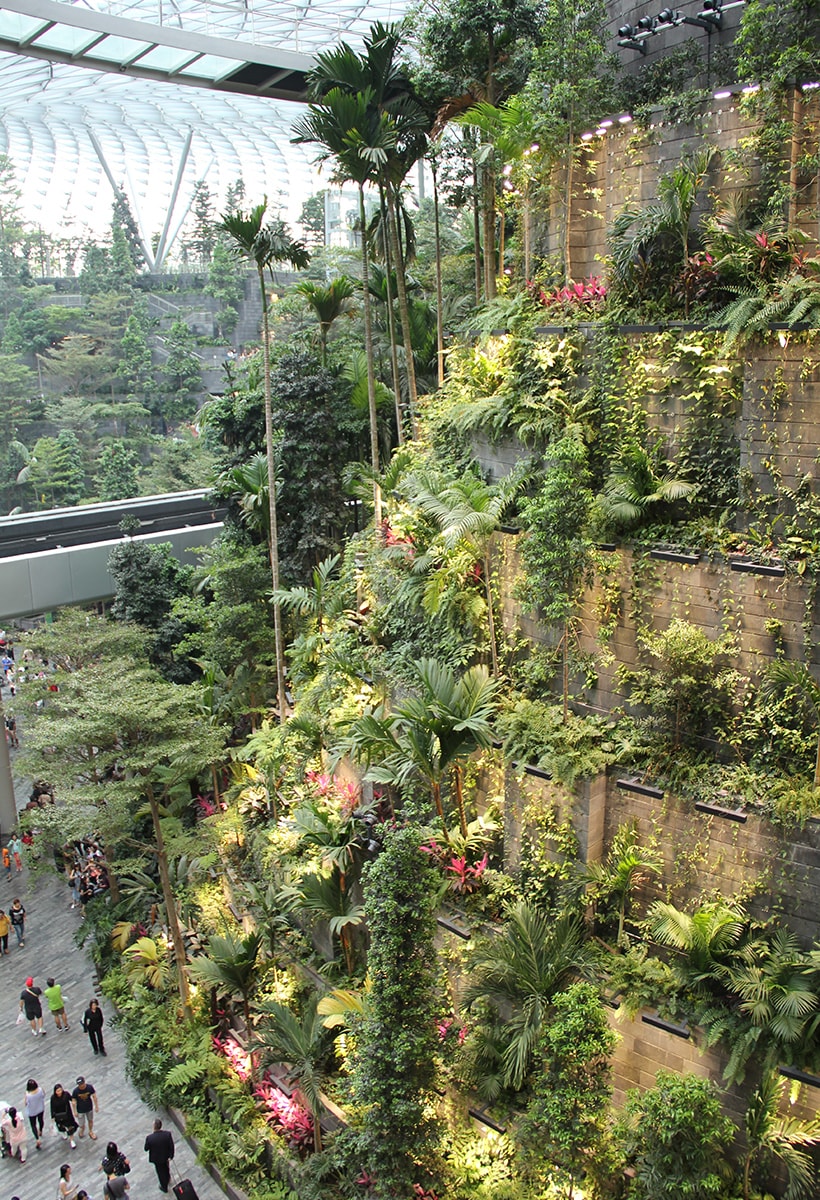 #architecture
A rainforest in the airport

In Singapore, the Jewel Changi Airport, a hub of transit, waiting and connection between the terminals, immersed in a tropical park with a spectacular waterfall, demonstrates that a green future is already possible

“Architecture constructs our living environment and should always be unique, in keeping with the site and the users, contributing something useful to the community,” says Moshe Safdie, the famous Israeli-Canadian architect who is truly changing the Singapore in a green and very Instagrammable way, after having invented the revolutionary Marina Bay Sandshotel for this Southeast Asian metropolis (three 55-story towers topped by a ‘raft’ with a length of 200 meters, with a panoramic pool apparently suspended in the void).


Moshe Safdie
°
Safdie Architects is an architecture and urban design studio imbued with a spirit of idealism and innovation. The practice is research-oriented and forward thinking, drawing upon a depth of experience to solve contemporary building challenges in imaginative and unexpected ways. With intense personal involvement of Moshe Safdie and the core group of Principals, the practice operates in the model of a design studio environment - with the resources and design intelligence of a nimble organization - to deliver some of the world’s largest and most complex commissions.

The Lion City (from the Sanskrit root for Singapore) lends itself in many ways (including the climate) to embody the metaphor of contemporary dynamism and renewal, and last April ‘Safdie’s’ Jewel at Changi Airport, the new hub of connection between three of the four terminals, was opened as a work of Land Art and technology that will certainly get noticed. The complex speaks Italian (thanks to Mapei) in terms of the materials used for the installation of the floors and facings (see the in-depth coverage on the following pages). 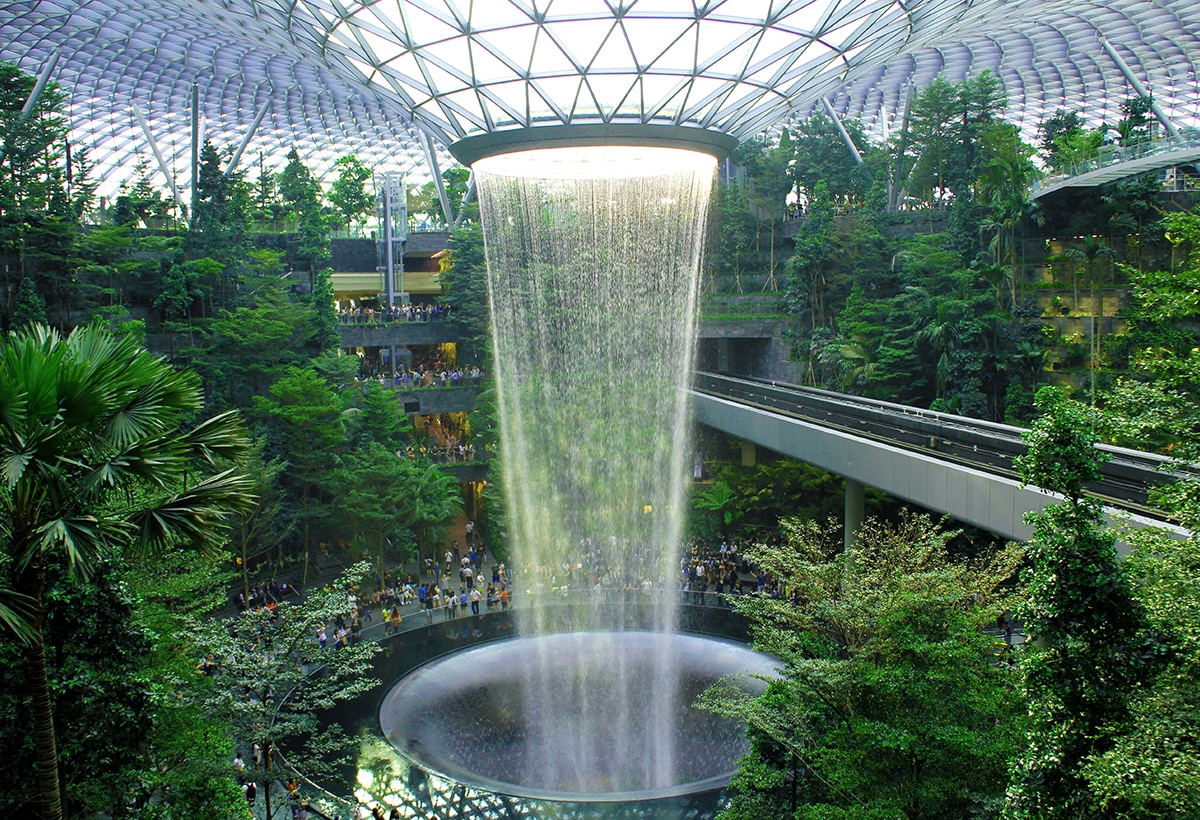 5
The heart of the Jewel, the Rain Vortex, a grand work with a height of 40 meters, featuring a cascade from the glass oculus of the roof and developing inside. In the evening the waterfall is enhanced by games of light and color, boosting the multisensory impact. Besides its visual appeal, the installation recycles rainwater to cool the interiors and to irrigate the plants.

Built on the former parking area of Terminal 1, the Jewel infrastructure has been envisioned by Safdie as a marvelous green ecosystem in which the landscape designs and connects the space in a fluid, vital way, offering visitors an experience that is a tribute to the image of the Garden City. Nothing austere and impersonal, in short, no already written scripts, as can be seen in the very numbers of project: 3000 trees and 60,000 medium and small shrubs, in an area of about 22,000 square meters, form the core of a ring-shaped building of 135,700 square meters on ten levels (five below ground, set aside for parking).

The composition contains three striking interconnected episodes of dizzying height. First of all, a terraced garden on five levels (known as Shiseido Forest Valley), populated by over 200 species of plants selected from Brazil, Australia, Thailand and the United States, which flower and grow at a controlled temperature of 23 degrees under a dome formed by over 9000 panes of glass held in place by 18,000 steel beams inside a complex structural grid.

“
The Jewel is not just a lush garden paradise. Like a Greek agora, part of its area is set aside for an appealing ‘market’ offering 280 shops and restaurants, a multiplex cinema and a Yotelair (luxury airport hotel) with 130 cabins."

Then comes the nucleus of this giant architectural installation that stimulates the senses, heart and mind: the spectacular Rain Vortex, an indoor waterfall with a height of 40 meters, descending from the central oculus of the glass dome, which during the evening amplifies its impact with games of light and color, visible from the pedestrian walkways and internal bridges (one also with tracks). The fifth and uppermost floor contains a park, known as Canopy Park, whose 14,000 square meters contain a glass bridge floating 23 meters above the ground, gardens of water lilies and cacti, labyrinths of hedges and topiary art, as well as a giant slide, elastic nets and other playground equipment.

But the Jewel is not just a lush garden paradise. Like a Greek agora, part of its area is set aside for an appealing ‘market’ offering 280 shops and restaurants, a multiplex cinema and a Yotelair (luxury airport hotel) with 130 cabins. 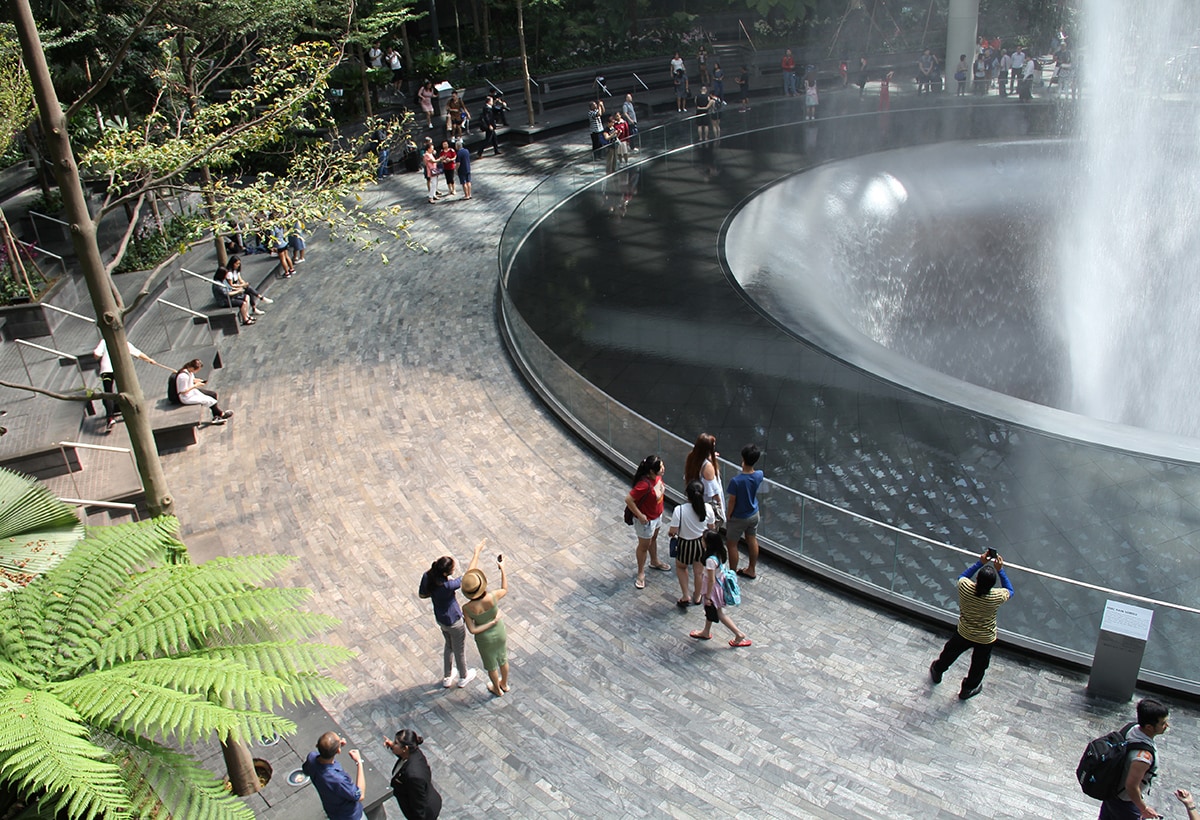 9
The project by Safdie Architects reshapes the meaning and function of airport spaces. Mapei has supplied know-how, specialized technicians and products for the installation of wall facings, floors and pavements. Research, innovation and international reach now make Mapei not just a supplier of products, but a partner with expertise in engineering and architecture for all sector professionals. A global player with a medium-long range vision, concentrating on a mixture that includes products, production capacity and people. The granite of the flooring in the basement has been installed with Keraflex Maxi S1 and grouted with Keracolor SF.

In essence, this mixed-use transit node, also open to non-passengers (i.e. those who do not have a boarding card), creates a microcosm that puts human beings of the new century at the center, their wellbeing, comfort and quality of life, which are inseparable from dialogue and interaction with nature. To put this new Renaissance vision into focus, Safdie has brought together a team of engineers, landscape architects, interior designers and artists, reasoning in terms of biotechnologies.

“
Architecture constructs our living environment and should always be unique, in keeping with the site and the users, contributing something useful to the community"

Without forgetting that life is born in every place and time from a drop of water, even when it becomes an epic cascade 40 meters high, Safdie comments: “Singapore has frequent rainstorms, so the water is gathered and recirculated through lateral nozzles, from the top down, to cool the interior and to irrigate the plants, while the glass roof with its form dynamically adjusts the influx of natural light and shadows, guaranteeing an efficient system of ventilation.” In other words, this work ‘draws’ an unexpected hyperbola between ancient constructive traditions in the recycling of water, and an unprecedented contemporary architectural image.