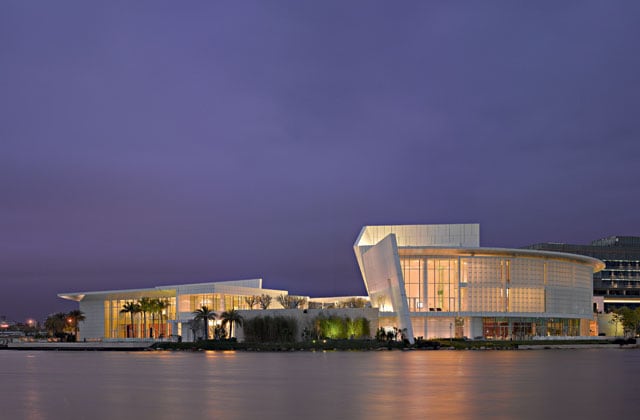 Built on an island at the center of a small lake, the OCT Clubhouse of Shenzhen is composed of two buildings: the larger one, the Cultural and Entertainment Center, contains a restaurant, a private dining room, a multifunctional area, lounge spaces and a small gallery for exhibitions.

The smaller unit, separated and connected by an outdoor path crossing a garden, hosts the Fitness Center with an indoor pool. The project is a skillful blend of architectural fragments typical of the work of Richard Meier, a sort of small Hadrian’s Villa (though in this case the emperor is not the client but the designer) where Meier reviews glimpses, fragments and details of his own architecture, recombining them in a new collage. This type of project is frequent among very experienced architects, who like to draw on their own repertoire. But in Meier’s work these repetitions are not the result of fatigue or pragmatism, because they are programmatic actions that attempt to establish a style that strives to achieve great clarity and recognition. For example, Meier states that “the OCT Clubhouse reflects a unique design while the architectural massing, the subtle folds and the modulated proportions are evocative of the firm’s guiding principles”. So the goal of the project is to interpret Meier’s thinking, to make a building that is 100% Meier-architecture. After all, Meier has more than fifty years of experience, in which he has maintained an incredible faith in his own style. From the start he has chosen to follow in the footsteps of modernism, of the white architecture of the 1920s and 1930s, and of Le Corbusier, beginning with the refined villas in the Hamptons, on Long Island, which grafted a taste for citation onto the glamour of the most exclusive seaside communities on the East Coast. In the 1970s Meier was known, with Peter Eisenman, Michael Graves, Charles Gwathmey and John Hejduk, as a member of the Five Architects, the elite team formed by the most sophisticated exponents of the New York scene. But shortly thereafter the Five went their separate ways, and Meier set off on a very successful international career. Important commissions arrived from Europe, starting with the Museum of Applied Arts in Frankfurt (1992), then the Canal Plus headquarters in Paris (1995) and the contemporary art museum of Barcelona (1995). From these works another Richard Meier emerged, gradually leaving behind the influence of Le Corbusier, as in the ramps of the museums in Frankfurt and Barcelona, defining a new profile above all thanks to his most important project, that of the Getty Center in Los Angeles (1997). Some of his Italian works, like the church of Tor Tre Teste in Rome (1993), the organization of the Ara Pacis (2006) and the Italcementi headquarters in Bergamo (2012), have expanded the register of an increasingly effective style. The project in Shenzhen is an excellent example of this later Meier: bathed in sunlight at the center of the water, the Clubhouse is an ample, serene composition, featuring skillful dynamic balancing of volumes, suspended in an unstable equilibrium that seems to change depending on the vantage point, the natural lighting and the effects of the reflection in the water. An ulterior level of lightness is achieved in his classic gutted frameworks, the perforated walls and the pervasive use of white, which together with his hair and his shirt forms an important part of his signature image. In the Clubhouse elements we could call landscape features also have an important role to play, triggering a resonance between the buildings and their surroundings, like the inclined wall that terminates the semi-circle of the Cultural and Entertainment Center, the horizontal blade that covers the Fitness Center, and the architectural echo that rebounds between one building and the other.