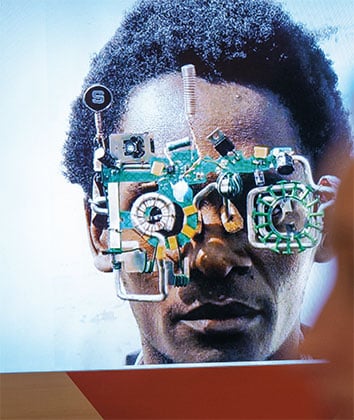 We don’t know a lot about African culture.

Which is why the London-based curator Beatrice Galilée decided to propose some thoughts about what is happening today in the 56 states of that continent, opening up a dialogue between African designers and the audience of the FuoriSalone 2013. The result was Afrofuture, a week of appointments with an unknown Africa, full of energy and hope for the future, balanced between the need to conserve a pre-set identity and the desire to construct, with daring and courage, a completely new image. Afrofuture undoubtedly made inroads to push aside the lack of attention regarding what is happening in to the south of the Mediterranean countries. An accomplishment based on wonder and curiosity regarding a culture – or a pancultural grouping – that is rapidly headed for what looks like a luminous future. For one thing, the African continent contains the youngest population on the planet. And young people, when they have access to visual and design culture, are the ones who come up with the most interesting cultural short circuits. Afrofuture brought to Milan Kane Kwei, the cabinetmaker from Ghana known all over the world for his thematic coffins; the vibrant and luminous eyeglasses of Cyrus Kabiru, from Nairobi; and Will Mutua, founder of Afrinnovator, a digital observatory on technology and economics in Africa. Or the network of Maker Faire Africa, the fair of African makers held last year in Lagos, shedding light on the capacities for self-definition and self-production of the entire continent. An aspect that should not be underestimated, as Béatrice Galilée explains: “Afrofuture had exactly the effect I was hoping for: to increase awareness of Pan-African culture and to offer its protagonists a chance for direct contact with a completely different kind of design thinking than what they are used to: that of Italy.” An operation that has closely to do with the construction of an identity, without pre-conceived notions and expectations. The danger, in fact, is in relying on a memory made above all of pre-packaged images or concepts: African aesthetics, African production. Actually, Béatrice Galilée comments, “it is better to talk about people, individuals sharing a common factor, without boundaries, in Africa as in Europe. The substantial difference between the two continents is post-colonialism: the endemic presence, in the language, the imagery, the history, of external influences. They are present, you cannot overlook them or accept them in an acritical way. The task of African designers is precisely that of finding a mediation, of constructing a more solid, aware identity.” But many of the Afrofuturists do not live in Africa: how can they think about constructing an African identity? “The term Afropolitan proposed by Nana Ocran, who helped me to build Afrofuture, answers your question. The African diaspora began decades ago, but the capacity to maintain profound, constructive relationships with the territory of origin is one clear characteristic of many of the professionals who live and work in Europe. They talk about Africa, work with Africa, study Africa and want to ‘make’ in Africa. It is a relationship that contributes to construct a free identity, not (or not just) the fact of living or not living in Africa.” So Nat Amarteifio, the architect from Ghana who has lived and worked in the United States, Canada and Nigeria, and was the mayor of Accra for four years, is correct when he says: “It is not necessary to be born in Africa to be able to say that you are Afropolitan. You just have to look at things with African eyes.” A disenchanted gaze, but one that is also full of faith, capable of imagining a different future, almost like the visionary illustrators of the book covers of new science fiction authors. An Afrofuture, perhaps.