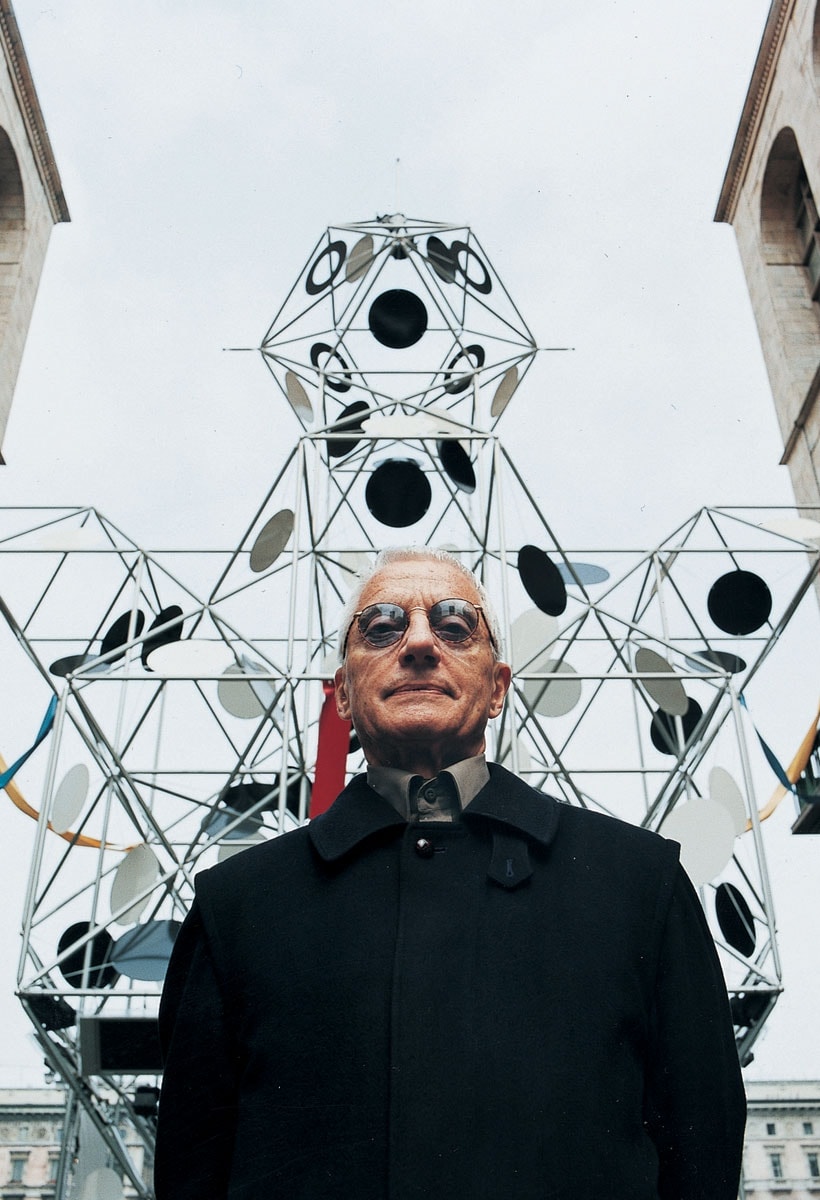 Alessandro and his brothers

#design
Alessandro and his brothers

Mendini in the memories of Andrea Branzi, Alberto Alessi, Beppe Finessi, Alessandro Guerriero and Fabio Novembre. One of the great innovators of italian design passed away on 18th february. With his eclectic and experimental talent, he took design away from the canons of classic modernism and opened it up to the expressive impact of new languages

Alessandro Mendini
protagonist during an Interni event
°
Alessandro was a unique voice: a theorist of postmodern design, banal design (using the banal as a linguistic code and incorporating quotation, inconsistency, inauthenticity, incompleteness) and re-design (the decoration of found objects or famous design products). He founded cultural movements and research groups like Global Tools, in 1973, and Alchimia in 1979. He was the creator and director of the design magazines Modo and Ollo, and he also directed two important Italian architecture magazines: Casabella and Domus.

With the death of Alessandro Mendini (and shortly prior, that of Tomás Maldonado) an important chapter in the history of Italian design comes to an end – a chapter full of conflict regarding the attempt to renew not only the language but also the very understanding of design, taking it out of the limits of the mere discipline to position it amidst intellectual activities, as a tool sensitive to the changes of the society and its historical horizons. This was a long process that influenced international design in the 20th century, steering postmodernity, globalization and new markets along heretical or hyper-orthodox paths. In this sense the 1970s, and all the 1990s and beyond, were marked by the great influence of design magazines (where Alessandro, but also Tomás, were among the great protagonists), by the presence of the post-radicals, the experimental workshops, the mass spread of the design profession all over the world, the demand for innovation on the part of every production sector in order to cope with international competition; but also by a compact opposition of the last heirs of the school of Ulm and its ideological theorems. Italy, in those years, thus became the theater of a clash of two opposing visions of the universe of merchandise.

The crisis of rationalism, functionalism and any type of design methodology was the result of a profound revolution, which traditional marketing had trouble intercepting. Likewise, the idea of modular components, serial production, coordination and a substantial lack of expressive force of individual components of furnishing systems coincided with an interpretation of the Fordist logic of the assembly line.

As Pier Vittorio Aureli has written, Italy in the 1960s manifested (for the last time) two cultures that had a vast international resonance: the Tendenza of Aldo Rossi, and the Radical movement of the Florentine vanguards; two non-identical twins that were already getting away, along different lines, from the canons and certainties of classic Modernism.

But in many countries design was going through a moment of waiting, to get beyond a state of uncertainty that took on greater depth and looked to Italy, to its vitality and its maturity. In 1982 Domus Academy (the first international post-graduate design school) grasped this expectation, inviting great masters, the new generation, new technologists, new sociologists to teach there, grappling with the new themes of design. But also DAMS in Bologna, during the 1970s, developed new educational practices.

The New Italian Design was born in Milan in this atmosphere of widespread experimentation, and was able to provide a unified strategic scenario for these various forms of anarchic energy, with respect to which the critics, but also the industry, remained hesitant, or even indifferent. What was happening was in fact that progressive and unstoppable breakdown of the mass markets, the formation of a constellation of small trend markets, no longer corresponding to demographic divisions, but instead to choices of taste: the project no longer had to present itself as something that could be accepted by all, but had to be able to “select its own user” through new languages, patterns, colors; hence the first experimental workshops, like Alchymia and then Memphis. The industrial firms, suspicious at first, gradually understood that the market was effectively changing, and they began to experiment with new merchandise strategies.

Today this phase of transformation of the market and the society has been completed; the old oppositions no longer have any reason to exist, and experimentalism and innovation are no longer just minorities, but have to do with the entire productive system. The new generation of creative talents, in design as in fashion, unlike my generation, do not have the urgent need to ‘free themselves’ from something, to get beyond limits, to abandon conventions, because they do not have a past with which to cope. Those of us that as Pier Paolo Pasolini said “live in history” look with uncertainty at their tender ignorance, their thoughtless freedom, and we remember when we too were children who looked at a world that did not belong to us. 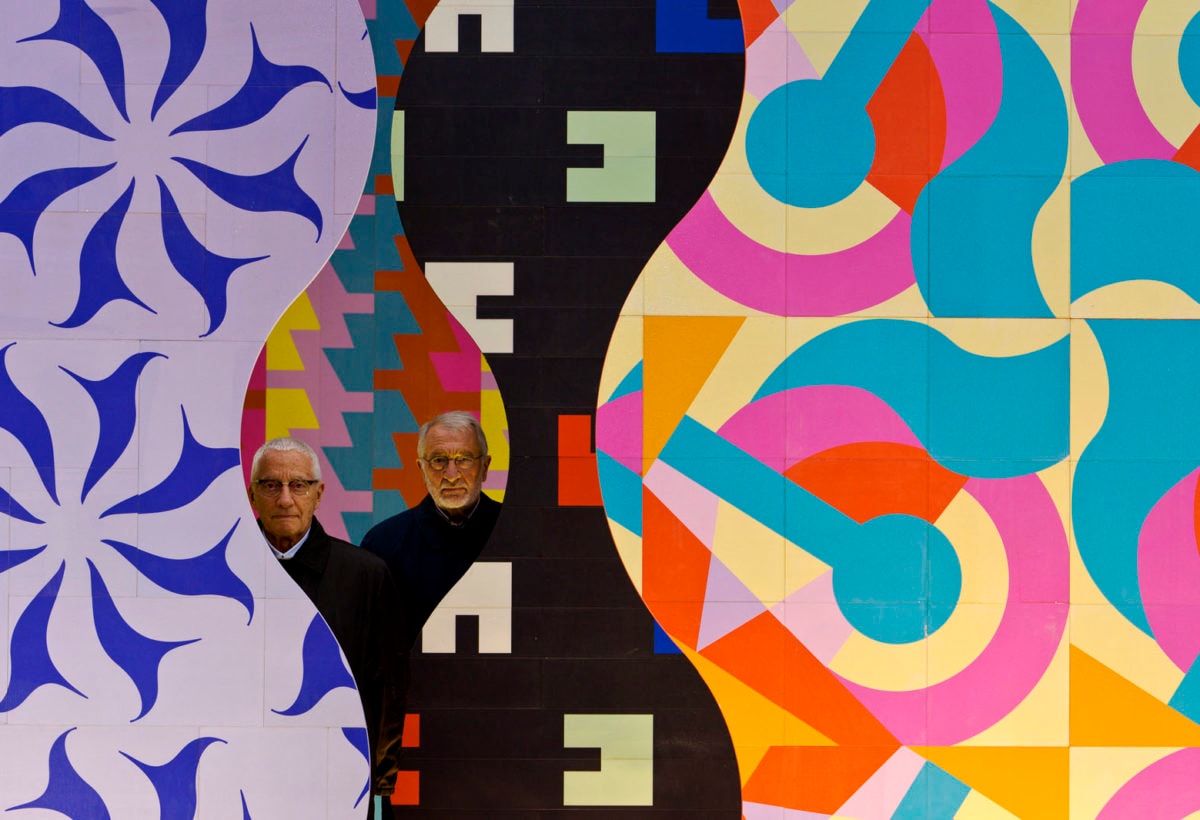 10
Since 1998 Alessandro Mendini, with Atelier Mendini, repeatedly created installations for the exhibitions organized by Interni for the FuoriSalone. On the left, the designer with his brother Francesco.

Sandro was my mentor, starting in 1977. Much of what has happened to Alessi began with his tactful proposals, which were at times true suggestions, but more often simple reflections spoken out loud. I rather regret the fact that I usually forced him into long sessions seated at a table, even though he ate almost nothing and seemed to live on pure spirit. Then, in the last years he changed, displaying a certain interest in food as long as it was very good and delicate, and naturally served in minimum quantities. Together we explored the boundaries of the aesthetics of the domestic landscape, if one exists. We shared difficult moments, also on a private plane, and he was always extraordinary close and generous. In the end, we also had fun. And for me he will always be up there, in his overheated little office on the mezzanine of the Atelier on Via Sannio, curious about the new things I bring him and ready to offer me his umpteenth interpretation. As happened with my father, I am certain that I will often ask myself what he would have said about one thing or another…

Alessando Mendini, i.e. the Master of this contemporary age, a visionary designer, methodical and lucid, a tireless, generous supporter of the work of all the talents who can (before) and after him. In the history of Italian design, which stands out for its constellation of clearly unique artists, Mendini – like an extraterrestrial – occupies a place of his own: after having grown up with the art of Savinio, and after having dreamt Steinberg, he gained maturity renewing and inventing magazines, where he learned to cross thought and project, to trace theoretical reflections and to host innovative hypotheses of architecture, and then to imagine cultural actions, above all to spread the works of others, always believing in the value of diversity.

And so, while his works of architecture became multicolored accents in the most sensitive places of the arts, and while his radical gestures ended up in museums and his industrial objects in the homes of all of us, Mendini never stopped outlining spaces in which to promote the work of talented architects, designers and artists he came across in real time, using his very sensitive antennae – a true radar man – to intercept even the most reserved, marginal and silent. Touching on every area of the creative disciplines, Mendini governed two working tools that were complementary for him with laser-like precision: drawing, both fresh and acute, a cartoonist’s sketches but enhanced by the explanatory impact of a blueprint; and writing, precise and analytical, sustained by an erudite language that allowed him to always, effortless reach the right word, quietly demonstrating a truly encyclopedic knowledge. 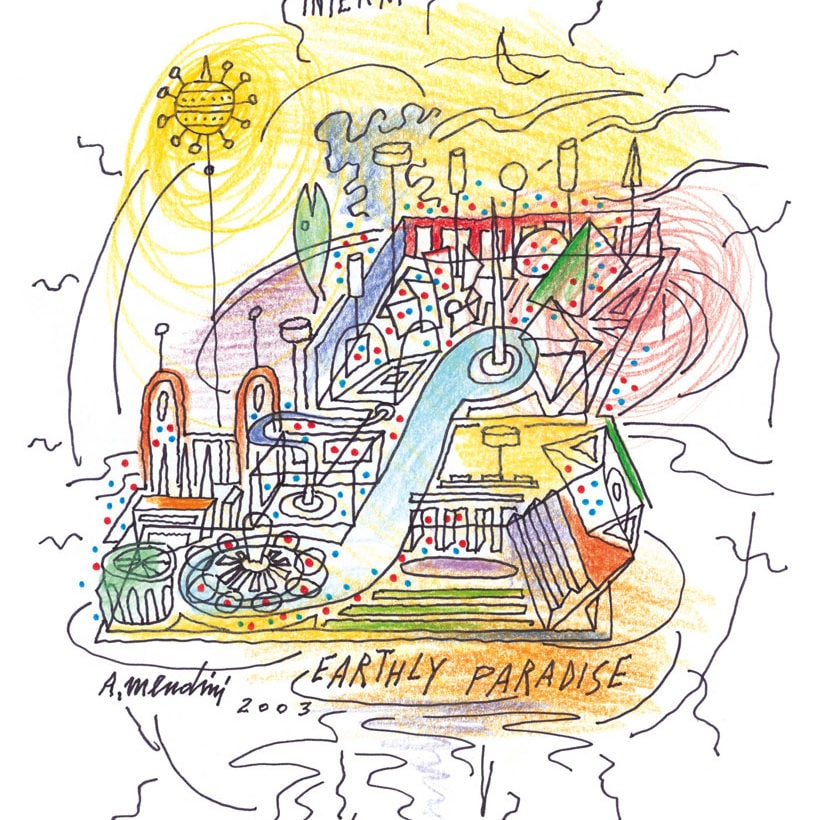 1
A drawing by Alessandro Mendini for an Interni event in 2003.

In the information theory of Shannon it is estimated that linguistic redundancy, or the use of excess words for the communication of a concept, amounts to about 70% of the total discourse. This apparently cruel fact is confirmed when we transcribe voice recordings of talks or interviews. The big exception that confirms the rule of Shannon has a first and last name: Alessandro Mendini. In the web we can find lots of material to support this assertion: Alessandro never wasted a single word. But this was a philosophy of life: everything that might seem exaggerated or maximalist in Mendini’s work is simply a process of subtraction achieved with clear, never random gestures.

Like his way of being in life: austere to the point of the monastic, moderate and honest, as might not be imagined. I have a memory dating back to two years ago: in the period of the Salone del Mobile we had both been summoned for a photo shoot, together with other designers. When it was over everyone got back in their cars with drivers and raced off to other appointments, but not Alessandro, who walked off towards the subway. I asked him if he trusted me to give him a lift on my scooter, and he replied with his usual affectionate tact, saying that the subway was the most convenient and fastest solution. He was 85 years old and the true superstar of that group: and he was my hero.

“
The designer today is not strictly an architect, a designer or a stylist, but rather an infradisciplinary operator able to link design, architecture, fashion, sculpture, painting, photography and performance"

Sandro and Sandro… In practice one appropriates, takes possession (body and soul) of an existing artist or designer. In the choice, you can already see that there might be affinities... You study the career, the life, the signs, the works, slowly… You become the other... and one moment later you continue ‘his’ work. Seeing ourselves can immediately trigger a sensation of dual presence and divine perception. It is a terrible expropriation. Using the same signs as the other, the same modes, the same stylemes, one obtains the same tools to (dare to take) the next step. The uni-verse becomes di-verse. One becomes the other. They say that everyone has a flip side to their nature, that is lost in some corner of the planet…

In the slow advance of the two entities there can be similarities or differences, but it is only later that utopian time can grant meaning to these choices. What will be the evolution? Equal to the original? Different? There will undoubtedly be the multiple project that replaces the individuality of a thinking ego with a multiplicity of subjects, voices, worldviews. There will be the work that in the desire to contain everything possible cannot give itself a form, cannot set its own contours. There will be projects that correspond in philosophy to non-systematic thought, which proceeds through aphorisms, through sudden, discontinuous flashes. And others still, constructed with many stories that intersect, mingle, get lost… In the end this overall idea of infinite simultaneous ‘universes’ in which all possibilities are realized in various plausible combinations will be the true result. Today the true project lives only if it sets itself boundless objectives, beyond any possibility of achievement.

In this video, created in occasion of Interni's event "Material Immaterial" at FuoriSalone 2017, Alessandro Mendini explains his installation "Pergola".