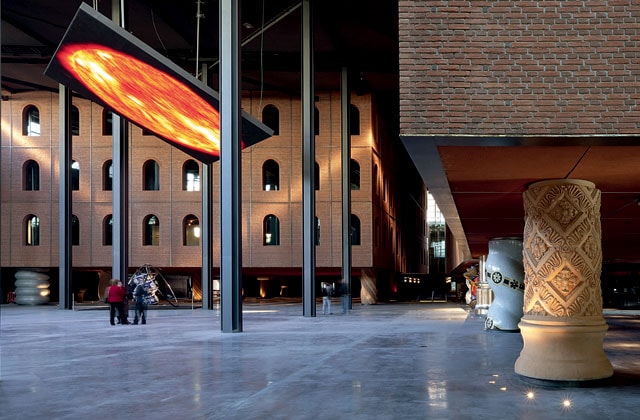 The Alhóndiga Bilbao is the first public work by Philippe Starck in Spain, commissioned by the city government. It recovers, converts and updates a modernist building in exposed red brick, iron and reinforced concrete built in 1909 by Ricardo Bastida and used as a warehouse for oil, liquor and wine, in the center of the city, Plaza Arriquibar, halfway between the recent Guggenheim Museum by Frank O. Gehry and the historic Plaza de Toros.

A fragmented enclosure, a building in which the composition consists of a central covered atrium faced by three red brick edifices on three levels, for overall floorspace of 40,000 m2 containing an auditorium, a cinema, a media library, sporting facilities, exhibition spaces and areas for artistic experimentation. “A place conceived as a motor of vitality and culture, in keeping with the Latin motto ‘mens sana in corpore sano’ – the design star explains. The result is a collaborative work: “I felt more like an orchestra conductor or a film director than an architect, in the traditional sense of the term”, he adds.

One interesting aspect of the collaboration is the presence of the Italian set designer Lorenzo Baraldi, who made it possible to resolve the critical visual presence of 43 pillars that punctuate the entrance space, the fulcrum of connection between the various activities. “I’ve always seen that in films everything happens behind columns... behind columns, representation of drama, beauty, history are hidden. Each column, in relation to its culture and its time, creates different interpretations, settings, emotions”, Starck says in the fine documentary-video 43 Columns, on view in Bilbao, produced by Schicchera Production, written and directed by Eleonora Sarasin and Leonardo Baraldi (Lorenzo’s son). This thought led to the choice of calling in a set design who works in cinema.

Based on the suggestion of project chief Stefano Robotti, three years ago Starck turned to Lorenzo Baraldi, born in 1940, from Parma, who studied set design at the Brera Fine Arts Academy in Milan, and has a great talent for drawing; he has won many prizes, including the David di Donatello, and has worked with directors like Dino Risi, Mario Monicelli, Massimo Troisi, Paolo Virzì, Paolo and Vittorio Taviani, Alberto Sordi. The designer of the sets of films like Il Marchese del Grillo (1981), Amici Miei (1975), Profumo di Donna (1974) enters our story almost by chance. In his first encounter with design, he was asked to make a permanent installation right in the heart of the building: to wrap the 43 existing pillars with columns of different forms, materials and decorations, inspired by all historical eras.

“Strolling through these columns one crosses geography, history and time. An open space-time where everyone can find something of himself”, Starck explains. Lorenzo Baraldi conducted research on models on which to base his columns in his studio in Rome, at Cinecittà, a sort of museum of cinema filled with models and photographs of sets. “Once the first faxes arrived from Paris with Starck’s sketches and indications, I developed about 800 designs”, he recalls, “starting with the inspiration from Egyptian, Assyro-Babylonian, Greek and Roman sources”.

A materic jubilee of sculpted arabesques, cascades of flowers, fruit, grapes, twisting ivy, that met with Starck’s enthusiasm. Once the definitive designs had been done, a set design workshop made the 43 models. This is an everyday practice for Baraldi. “Small models are very important in cinema, because many directors cannot interpret a plan, an elevation, a perspective drawing”, he explains. The continuation of the project was not a ‘mission impossible’. Baraldi knows the best specialized craftsmen and costume makers in the world. Responding to Starck’s clear urgings, he has made no concessions to the use of ‘humble’ materials, the kind often used for sets, like plasterboard and fiberglass. Here the choice has gone to noble materials from the history of architecture, fine lacquer finishes and such.

The territories involved are Carrara, Lecce, Rome, Florence, Perugia and Milan, finding the masters of the great Italian tradition of crafts, to make the columns in seven different materials: wood, marble, concrete, terracotta, brick, Lecce stone, steel. Only the bronze and aluminium were made in Spain. The Italian set designer coordinated all the phases, from the idea to the installation. “It was also a way of monitoring”, he concludes, “in the field, to see the force of experiments with ancient methods and advanced technologies”. Because, in the end, as the great architect from Turin Carlo Mollino said, “the meaning lies not in the words, but in the accent”. More than a figure crystallized in the solidity of its old walls, Alhóndiga Bilbao remains a living, dynamic ‘environment’ that belongs to its users and to the city. Together with its column-sculptures that, translated into a narrative film sequence, become even more the “hopeful symbol of a transversal contemporary society, multicultural and multiethnic, open to dialogue and exchange”.

From an encounter with LORENZO BARALDI What are the differences, on a theoretical and practical level, in terms of concept and production, between a temporary set made for a film and a permanent installation for an architectural work? “Only the materials, not ‘fixed’ and ‘humble’, but easy to remove.

Otherwise there is no difference in the idea and the design, though working with Starck I have realized that his vision as a designer is very connected to details, to perfection in the making, while personally I am more focused on the overall perspective”. In this work you concentrated on every phase, from the idea to the installation, like a designer who creates a piece of furniture and sees its production through to completion. Does that also happen in cinema? “It was precisely my experience with cinema that enabled me to do this job. Actually, on the set much more design is done than you might imagine. Just consider the fact that in two years I make an average of 4 or 5 films, and in each film I have to furnish over 100 spaces”. Are the two fields similar in terms of the human resources involved and the timing? “It depends on the size of the film. At times the teams are small, at times there are many people working on multiple sets at the same time, but the schedules are always very tight, very fast, often in isolated places, in the mountains or the middle of the desert,a real race against time, nothing like the deadlines found in architecture and interior design. Starck called me in 2008, but from the idea to the assembly of the columns in 2010 only five months passed”. What is the importance of drawing for the construction of a film set? “Drawing is extremely essential. By drawing you can ‘talk’ with the director, the producer, the buildings, because a sketch can be immediately understood. I don’t want to hear anything about AutoCAD, because it is a cold medium, it doesn’t convey the atmosphere of the environment and the decor. My assistants absolutely have to know how to draw”. An assessment of your experience with Starck? “It’s been positive, like working with a good director. It required a certain type of work, so as always I developed a range of hypotheses and we chose the best ones for the project”.  Your favorite reference points for design inspiration? “I’m omnivorous: my research ranges from sector periodicals to contemporary painting, I am still thrilled when I see a design by Gio Ponti, Ettore Sottsass, Vico Magistretti, Achille Castiglioni, people who truly renewed the living scenario. In any case, by background, as a former student at Brera, was mostly in painting. My favorite periods in art range from Impressionism to the Macchiaioli”.