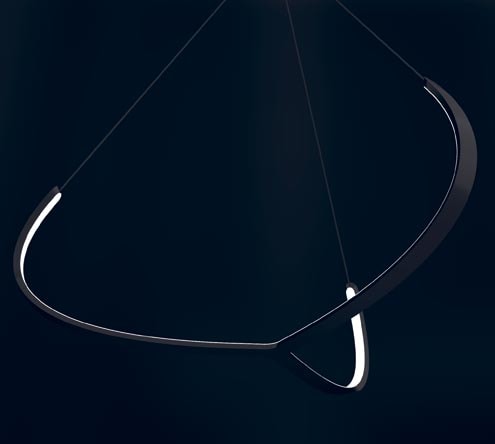 The task of design, and of design culture in general, is to provide a sort of score of objects to hold contradictory but equally demanding claims together, of technique and poetry, avoiding any flattening of the two and even making them destabilize each other, contributing with the meaning conveyed by their forms to the comprehension of their culture of reference.

From this vantage point, an interesting linguistic proposal is advanced by a series of projects, including the sculptural lamps in wood by John Procario, and Anisha designed by the trio Lievore Altherr Molina for Foscarini, whose bodies contain the concrete metaphor of a condition of life, the contemporary condition, in which the separation between inside and outside has lost its usual clarity, and been hybridized in an incessant flow of transtopological configurations. Lamps like these, and like Solium by Karim Rashid for Artemide, or Foop by the Japanese designer Kenji Fukushima, seem to be the result of local variations of a pure ‘exterior’ condition without inner life, sculptural fluxes of a fibrous skin that engages the surrounding space in utterly particular relationships of mixing. This is also the direction taken by the Kino lamp by Emmanuel Gardin (Studio Krizalid) and the Gamete.MGX model by Xavier Lust for . MGX Materialise, but also by a wooden seat like Pipo, designed by Alejandro Estrada for Piegatto. These works seem like the result of a design born on another planet, the furnishing complements of another world with respect to ours, on which there is no distinction, as in our world, between inside and outside, pulp and skin, and where not even vegetable and artificial have followed distinct paths, instead channeling into a single path of evolution that is now manifested in the mushroomy bodies of objects like those mentioned or like the Enigmum III seat by the Irish designer Joseph Walsh, or the Alya suspension lamp designed by Gabriele Rosa for Nemo Cassina. Goethe, in The Metamorphosis of Plants, underlined how the form of a plant can be deducted from the transformation of the seed, following a ‘metamorphic’ like different from that of taxonomy, accepting the generative principle of nature which is that of continuous making and unmaking of forms. This was a conception diametrically opposed to the one followed by the modern world, which can be referred in very recent times to the film Avatar by James Cameron, showing a world inhabited by hominid aliens, luminous plants, flying stones and objects that grow like vegetation, all connected to a large synaptic network that coincides with the ecosystem of the whole planet. Projects like the ones mentioned above, with the interesting forerunner years ago of the Inner Light lamp by Yves Behar, evoke a characteristic feature of our time made of digital connections, which though they are ‘inside’ the private dimension keep us always ‘outside’, projected outward, making each of us a synaptic node of a planetary network that grows and intertwines like a tree, or like a brain. Thanks to the sensitivity of languages like these, design holds together not only the traditional dichotomies of its own culture (technique and poetry, function and form), but also the new specific dichotomies of our era, like inside/outside, node/network, organic/ inorganic, keeping their tensions from reaching the point of lacerating the anthropological fabric, with respect to which they are instead conveyed into the project, to generate new worlds inside our world.